Toadstool Geologic Park, located in the Oglala National Grassland is a fantastic little underappreciated gem of Badlands in Northwestern Nebraska.

I visited it on my trip to Seattle and took a bazillion photos, which I'll now share with you, dear reader. 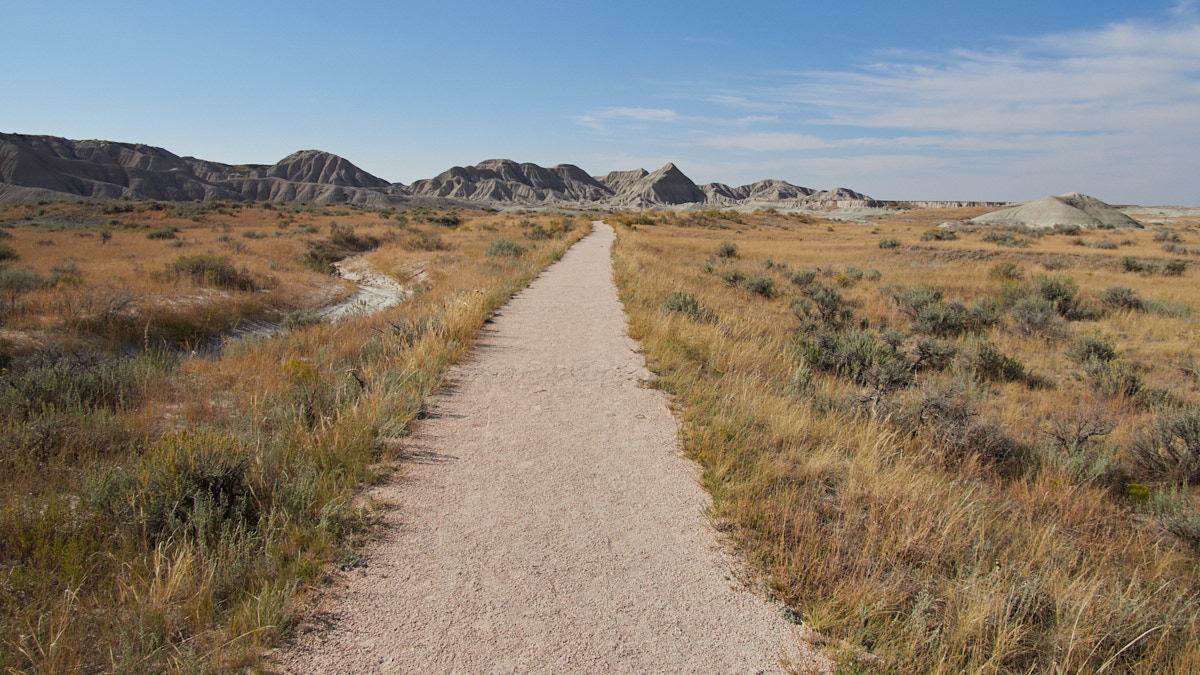 ×
This element did not display properly. Do you have JavaScript enabled?

The drive from Badlands National Park into Nebraska was an entertaining one.

As I left the Badlands, I passed a few tribal COVID checkpoints, where they stopped me to ask questions about my health and destination. Frankly, this made a lot of sense.

I passed into a small dusty town. I stopped for gas and an icecream sandwich at a cash-only station with dials and levers on the old timey pumps.

(The bulletin board had signs involving local indigenous language instruction-- which is super awesome. I lost the snaps I took.)

A Trump hat wearing man stopped me in the post office parking lot.

It was a one-sided conversation in which he felt the need to impart how much he liked the mileage he got out of his diesel Jetta. He hopped into a lifted pickup truck and disappeared.

I crossed the border into Nebraska, continuing along underutilized highways crisscrossed with railroad tracks.

It got to be near lunch time, so I stopped at Runza, a local Nebraskan fast food chain. I wandered past overall-wearing, sun tanned farmers and placed my order.

Check out this video from Eater for an explanation of the sandwich & its significance.

It's basically a bread pocket containing beef and cabbage, derived from the cuisine of Russian-German immigrants.

My cellphone snap of my sandwich was forever lost to the ether, but my pal Andrew Wilkinson, visited Nebraska around the winter holiday times and was happy to provide the following photos for your viewing pleasure.

Andrew also said, "No other food could have served as as hearty a fill-me-up on a chilly New Year Eve pre–Michigan football game afternoon."

A ringing endorsement, and one that I, unfortunately cannot second.

I recall thinking the bread of my Runza was not unlike an under-baked hotdog bun filled with meat and cabbage. Perhaps it was just my hunger, but I felt as though it was not quite as substantive or satisfying as I hoped.

I wish I liked it more than I did.

From there, I drove onwards until I started seeing some beautiful badlands on the horizon. Shortly thereafter, I was speeding down a dirt road towards the geological park.

The moment I got to Toadstool, I seized a campsite, set up my tent, and immediately set myself to... sitting in the shade.

After my experiences in the Badlands National Park, I knew I'd have a more enjoyable hike if I started later in the day, even if that meant it would necessarily be shorter. 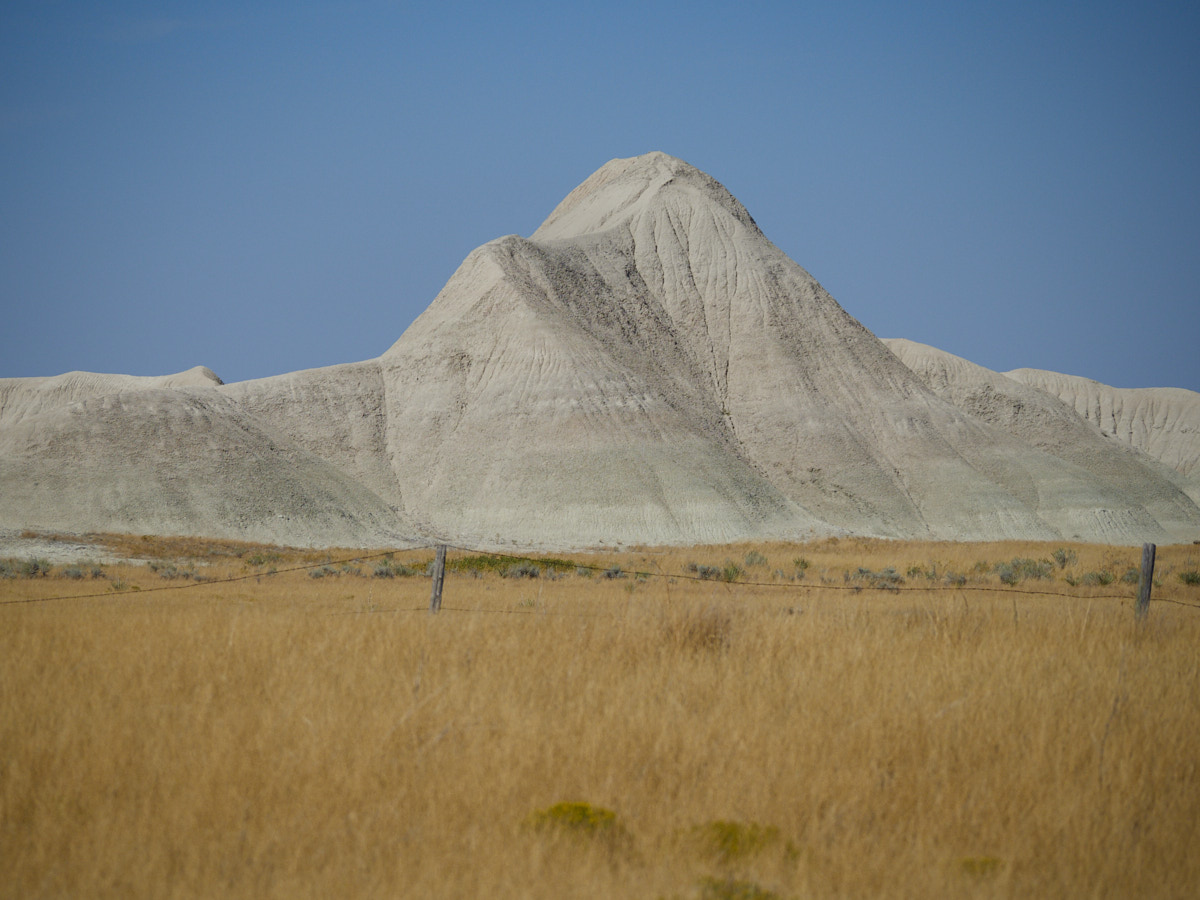 I admired the scenery, and the nearby reconstructed sod hut. 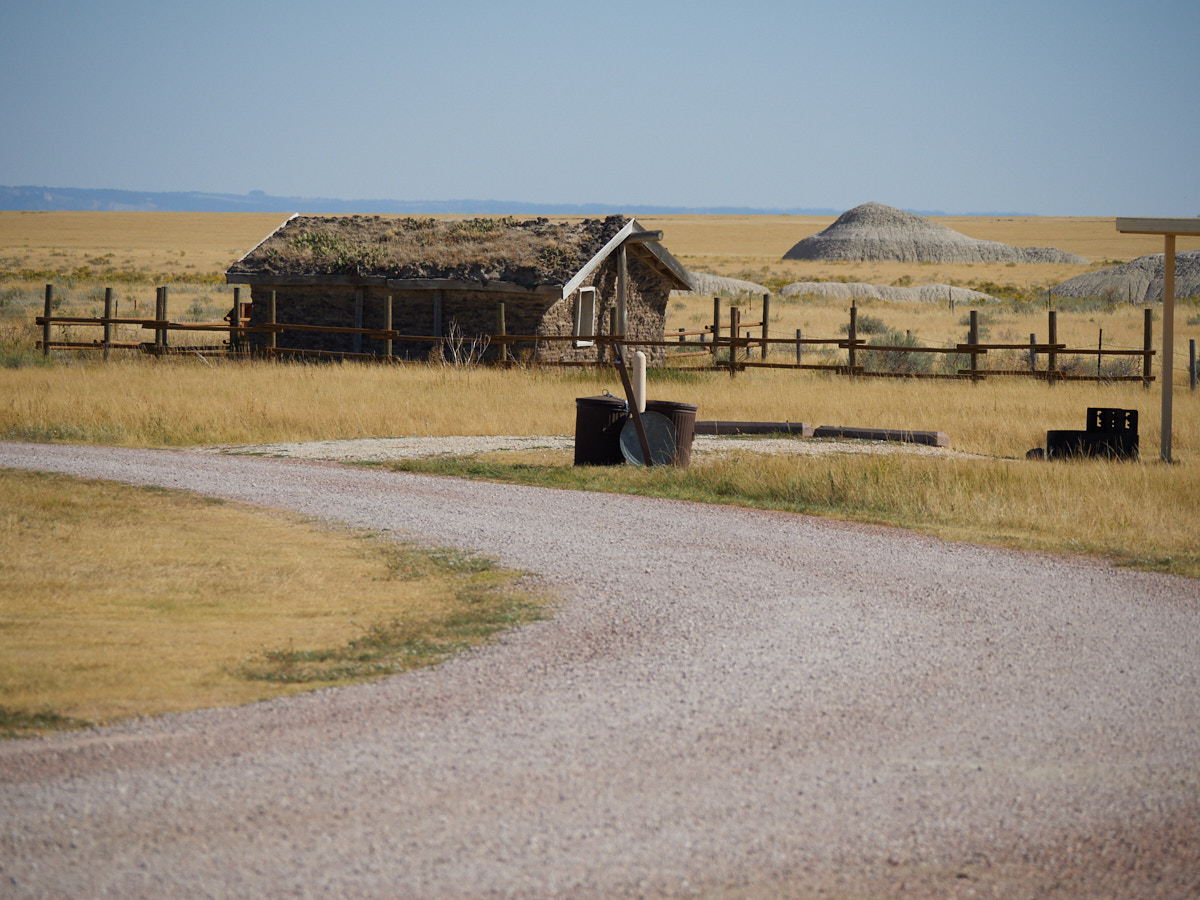 I took a few photos of a near by Western Meadowlark, who was seeking the shade as well.

If you can imagine, it's difficult to take good photos of a bird whilst it is hiding underneath a vehicle.

Other than that, I wrote some postcards, and did some reading.

And I looked upon nearby motorhomes with their central air conditioning with a mixture of disdain and envy.

After enough time passed, I went for a hike...

The hiking trails around Toadstool are mostly sunny and shade free.

I started on the Toadstool loop, which is a short 0.8 mile loop, but decided to switch to the longer Bison trail at the second junction.

From there, I went on a more expansive hike, eventually climbing over a ridge, wandering through a cattle pasture, and climbing back down into the badlands. 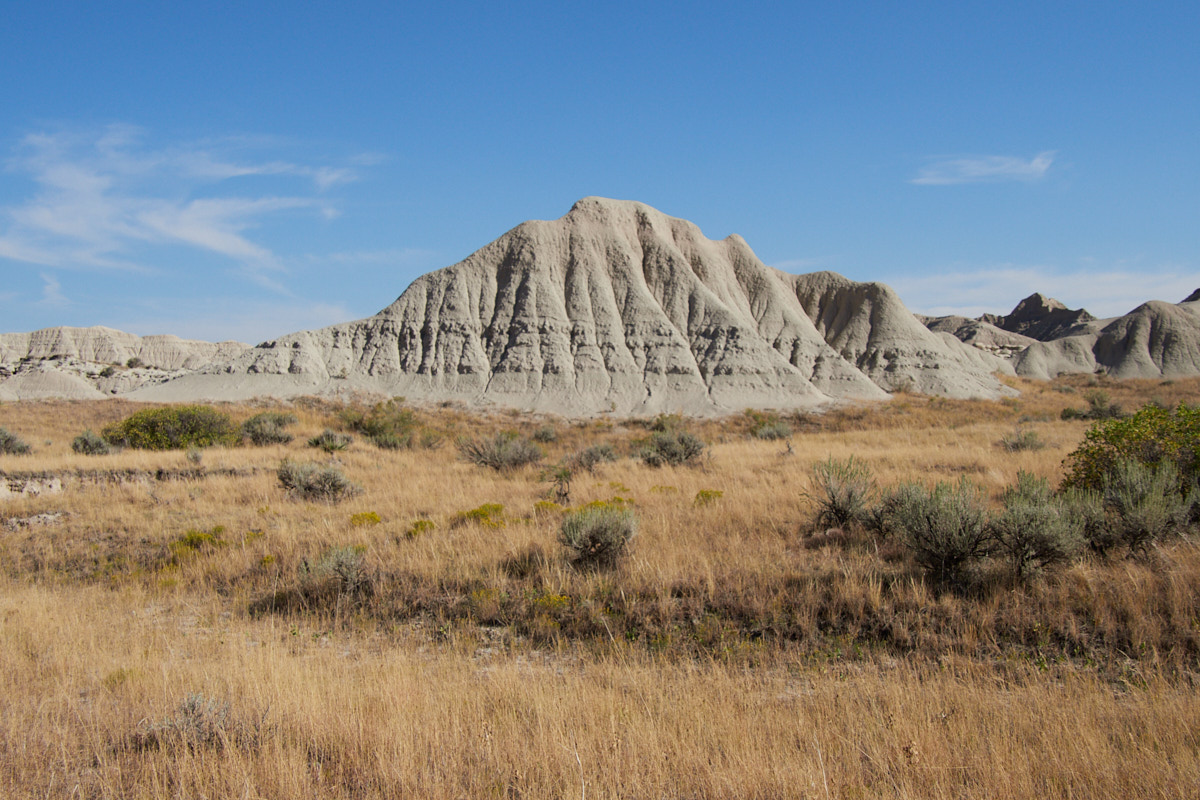 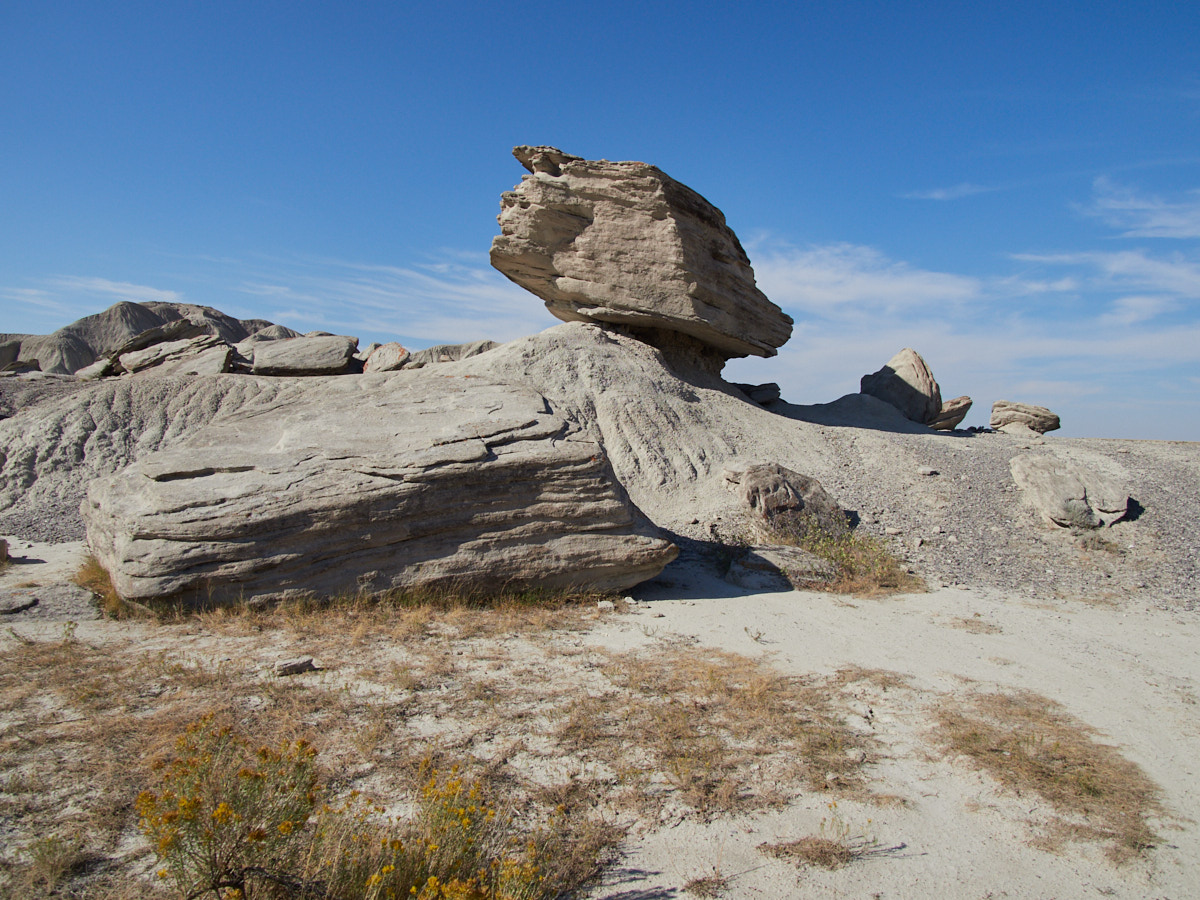 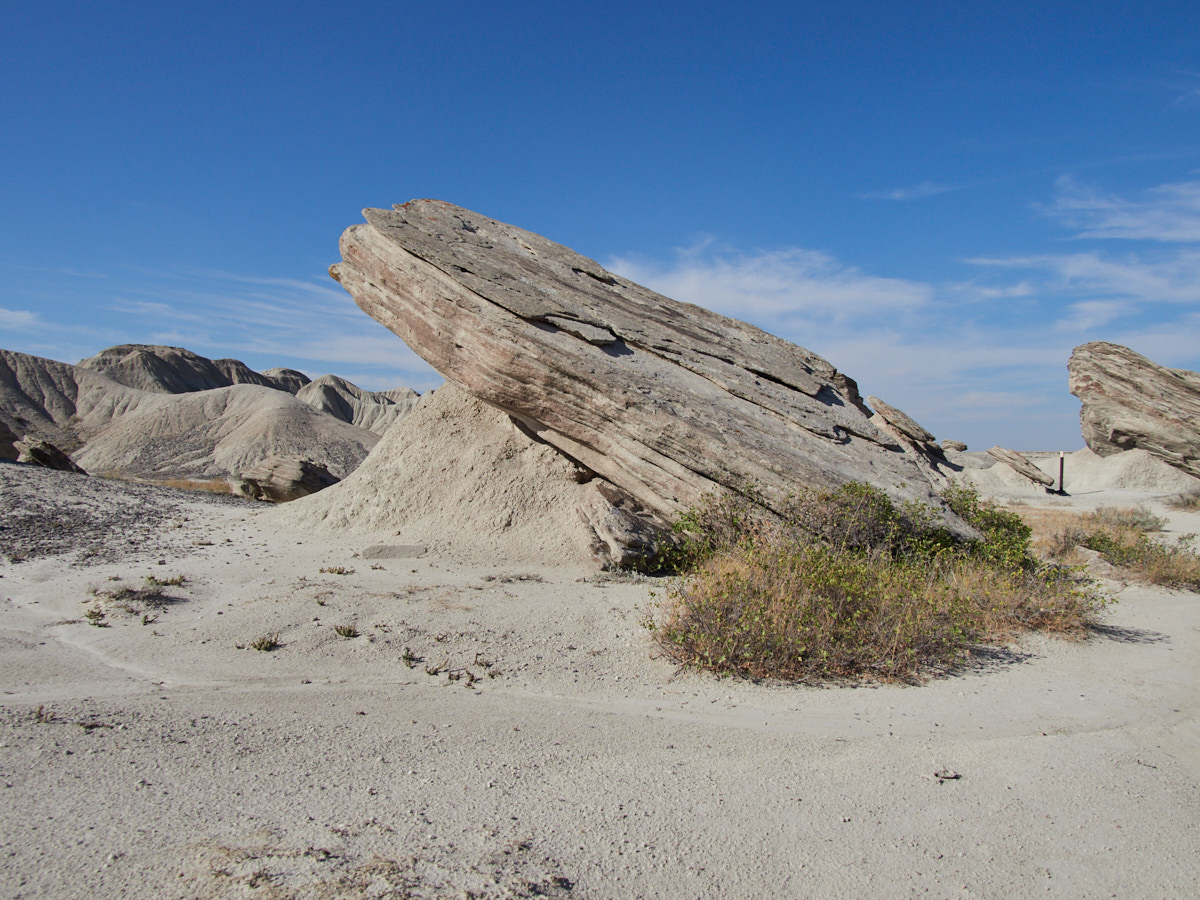 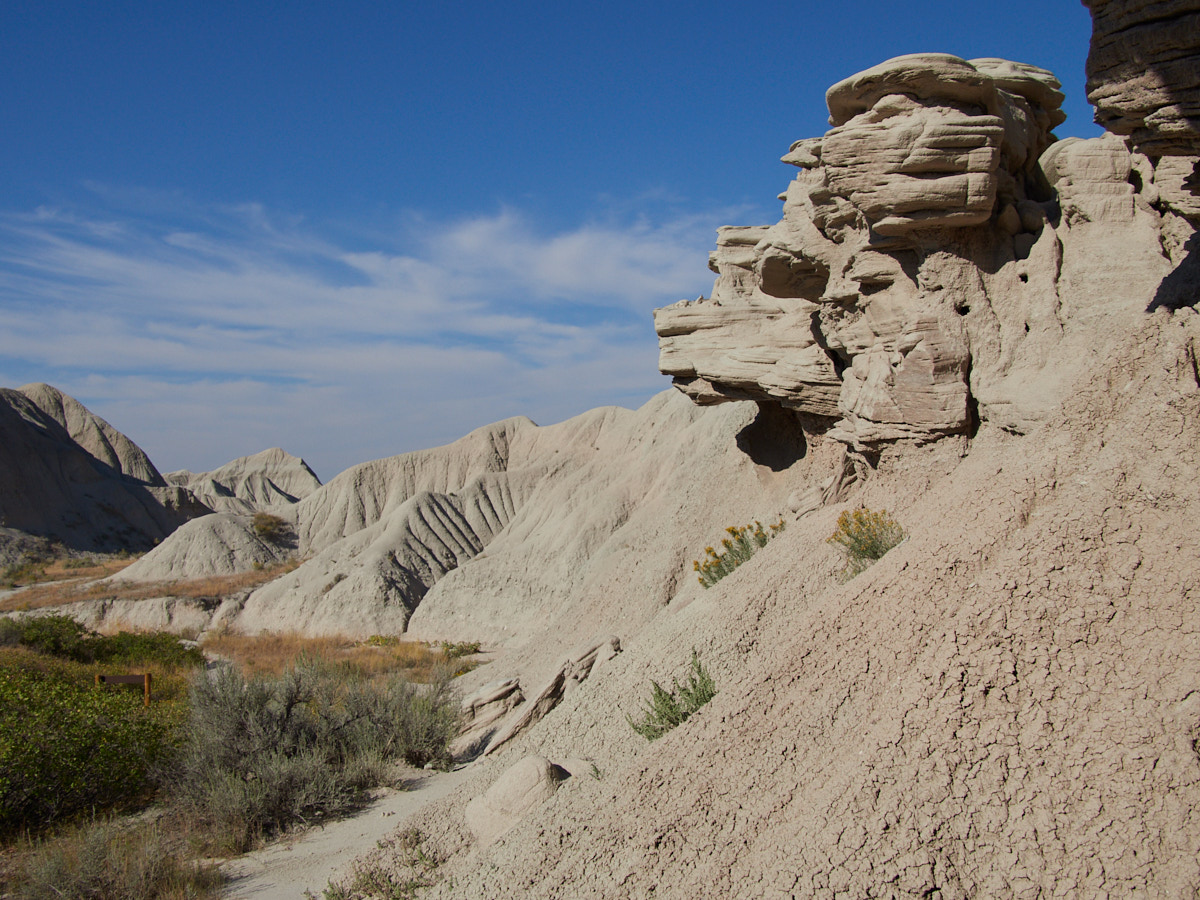 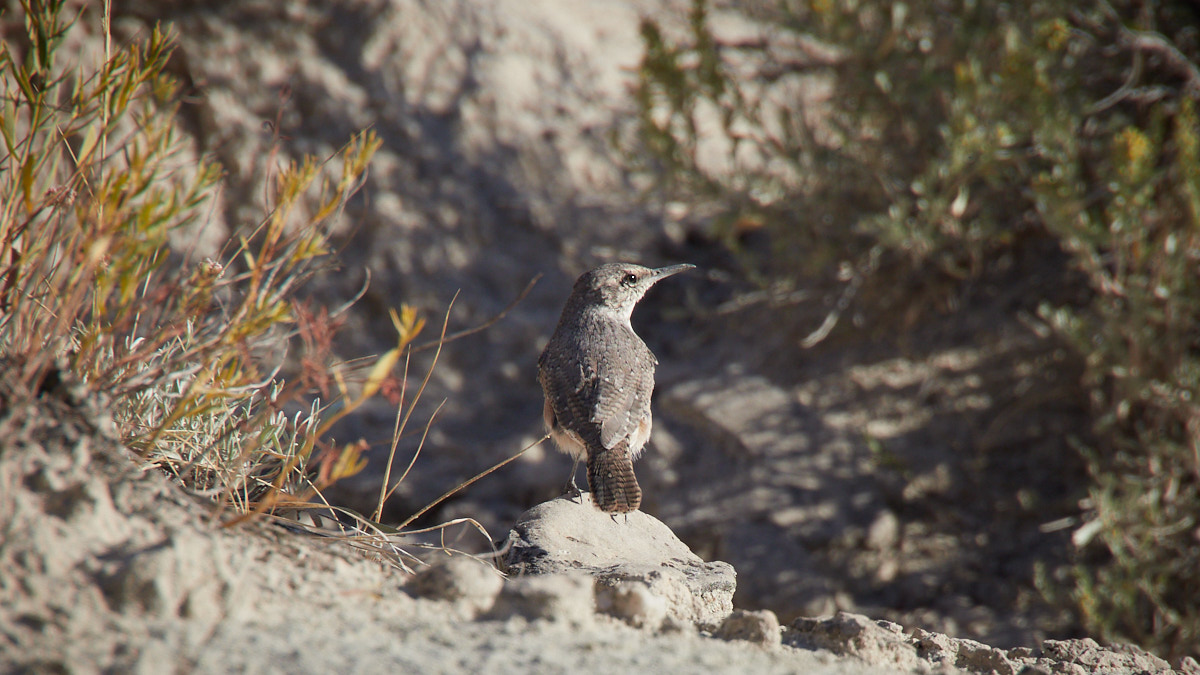 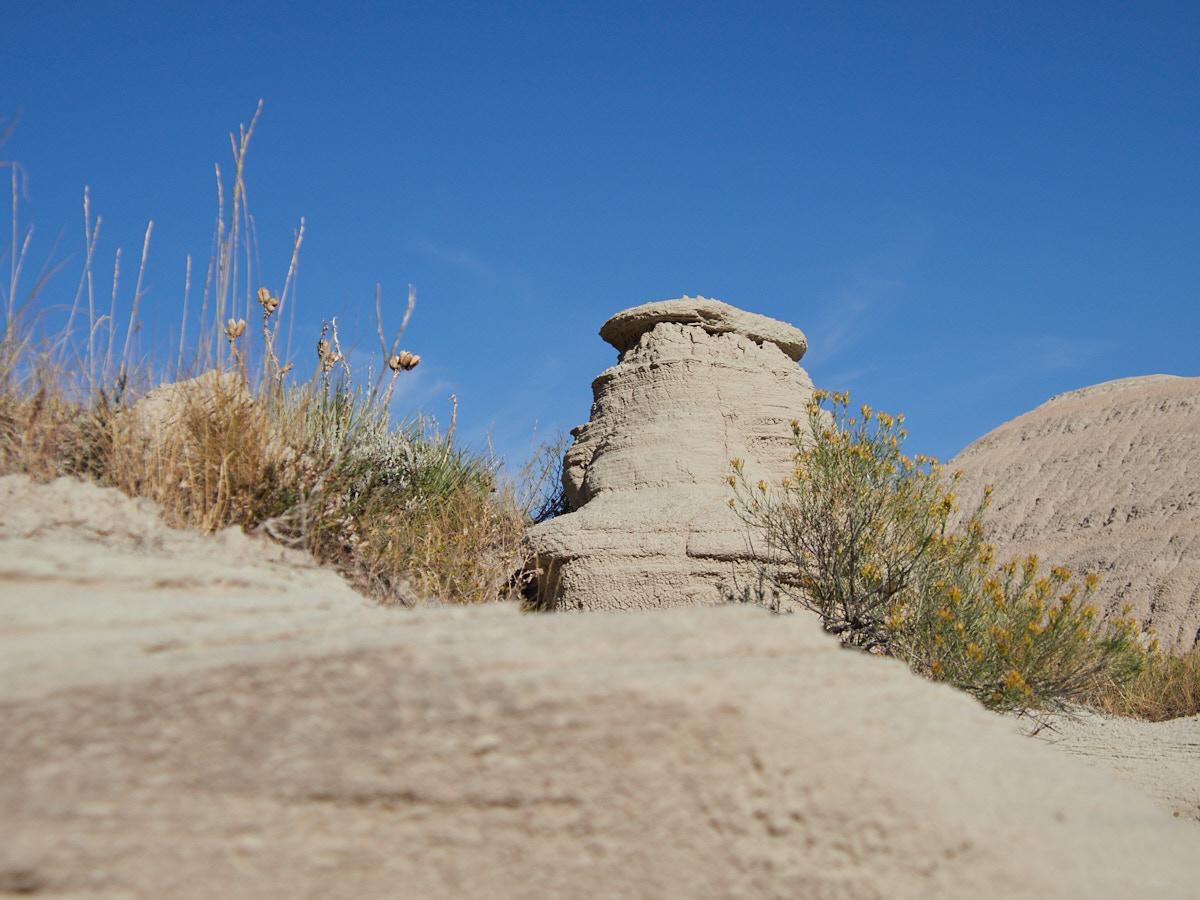 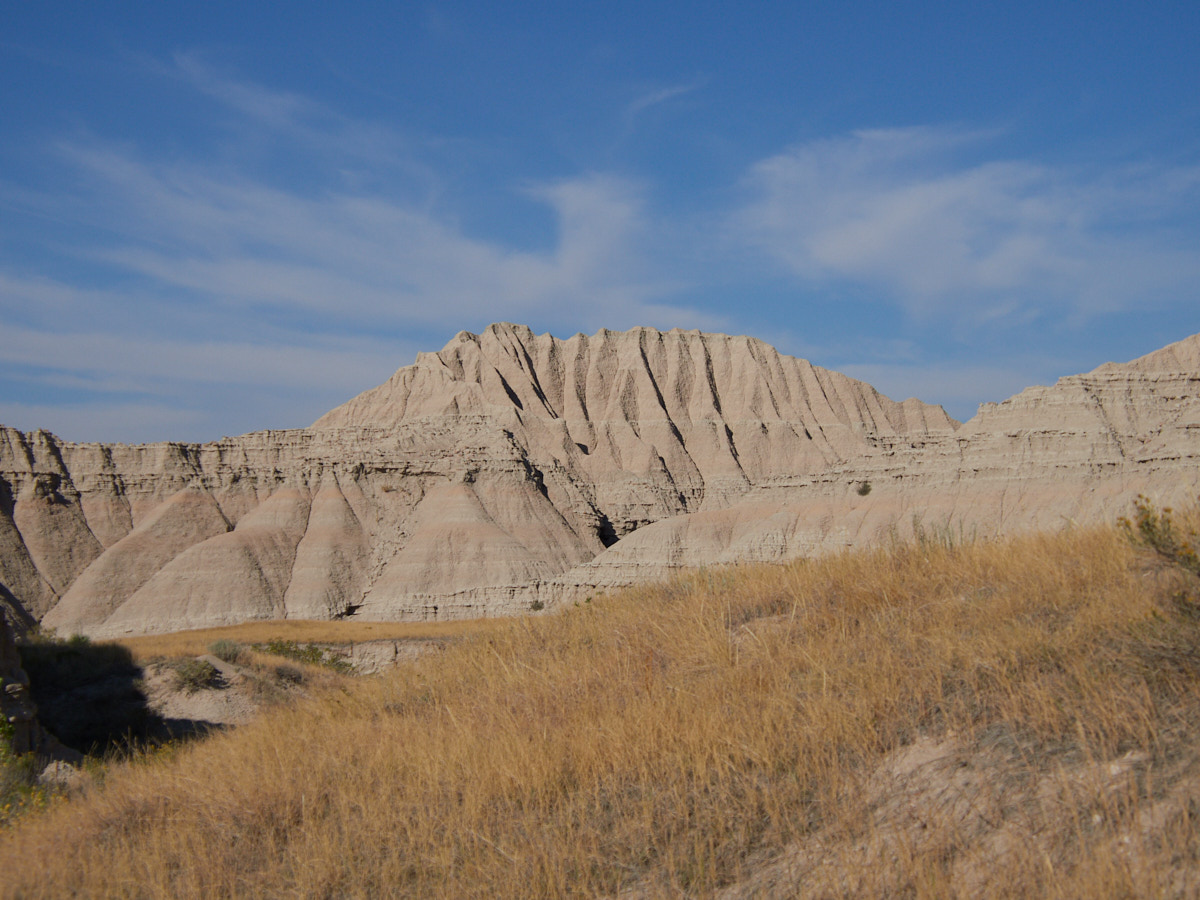 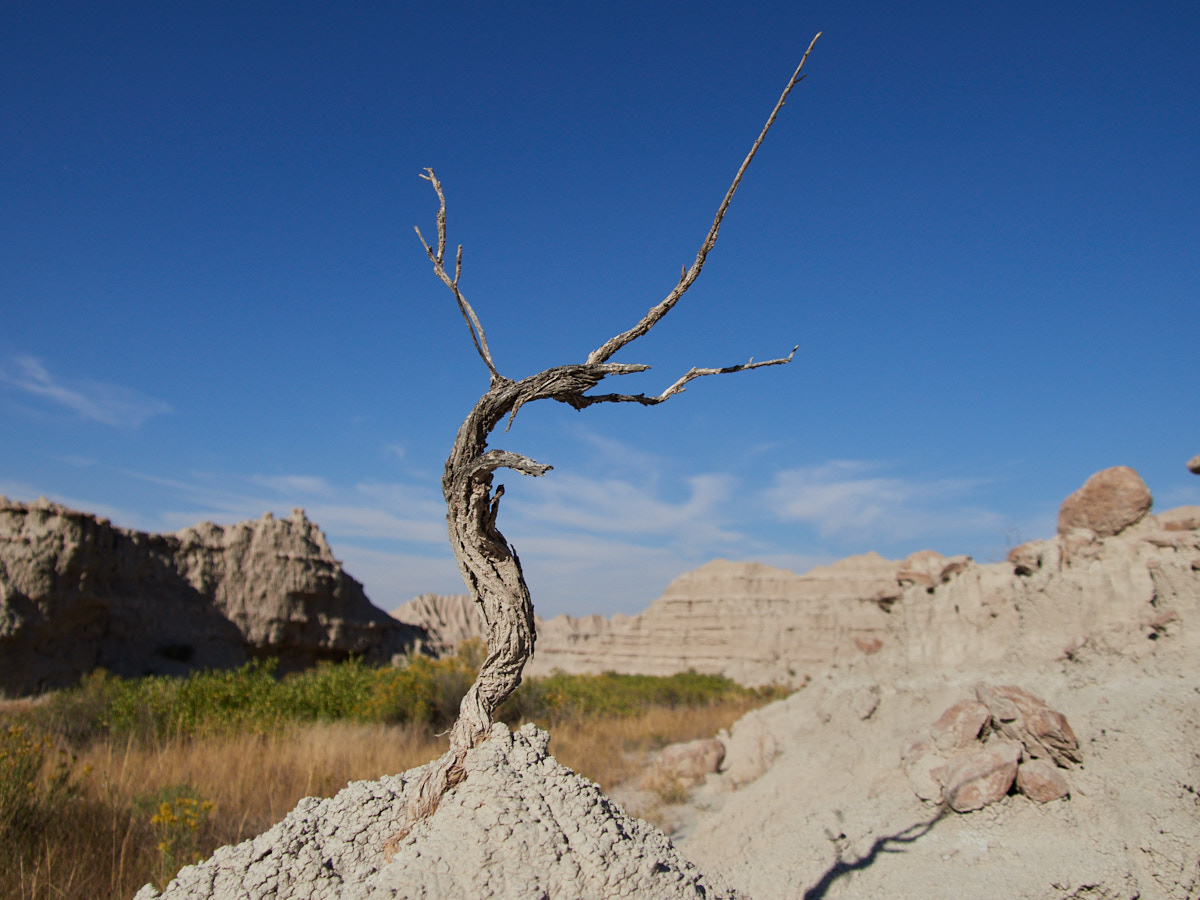 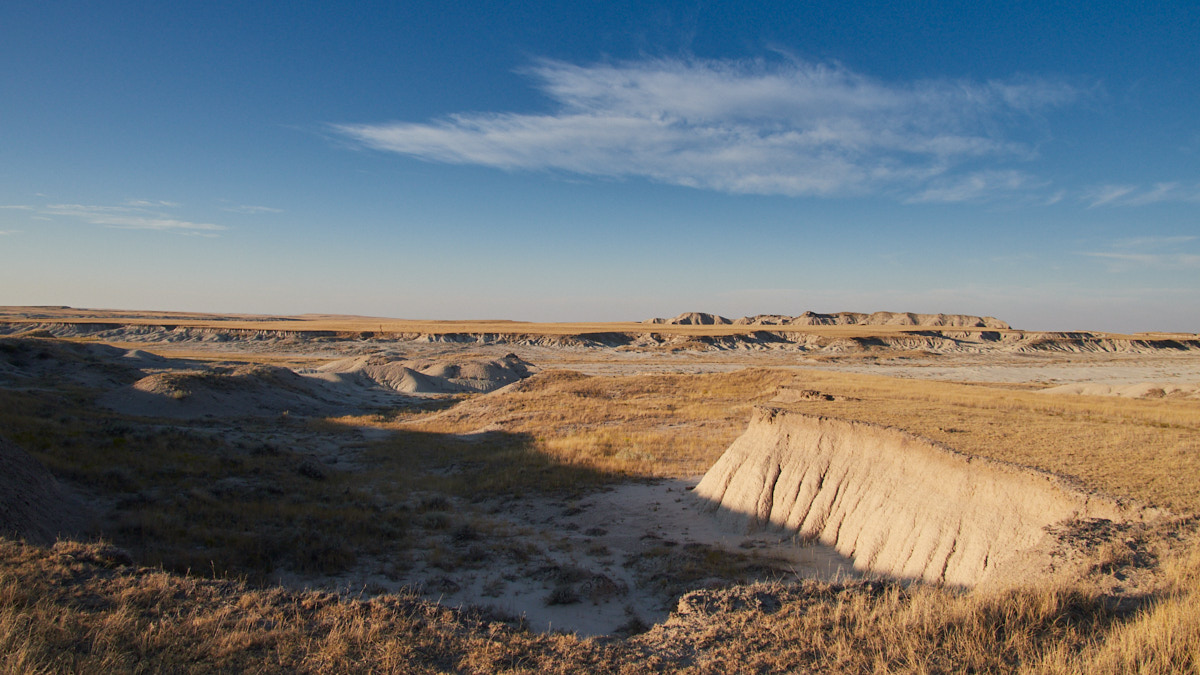 As I walked, I negotiated a few wire cattle gates, and marvelled at a lot of beautiful geology. And also an extremely long freight train in the distance. 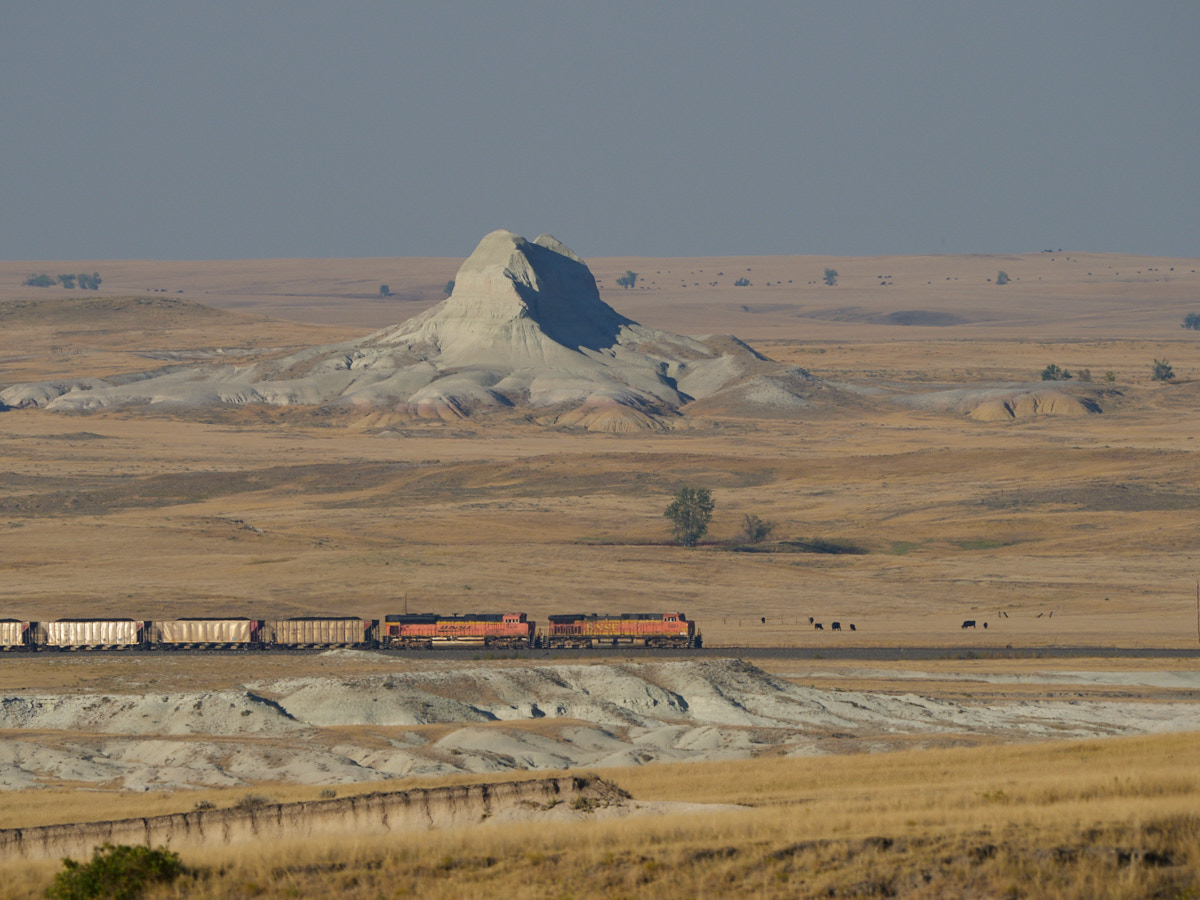 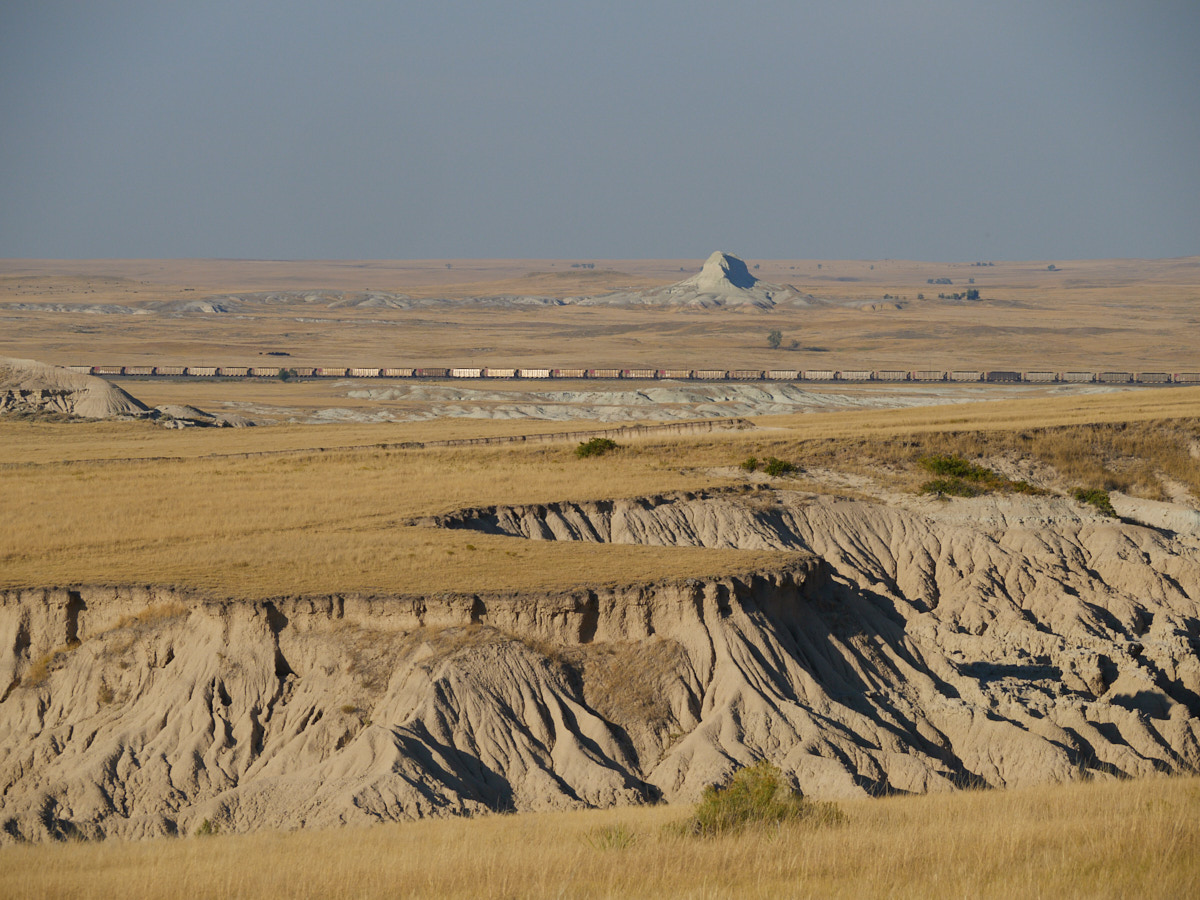 One of many such signs
×

During this section of the trail, I had effectively exited the badlands, and was firmly in the grasslands. I could look down at the sedimentary rock, or I could look over at cattle fields, fences, and troths. 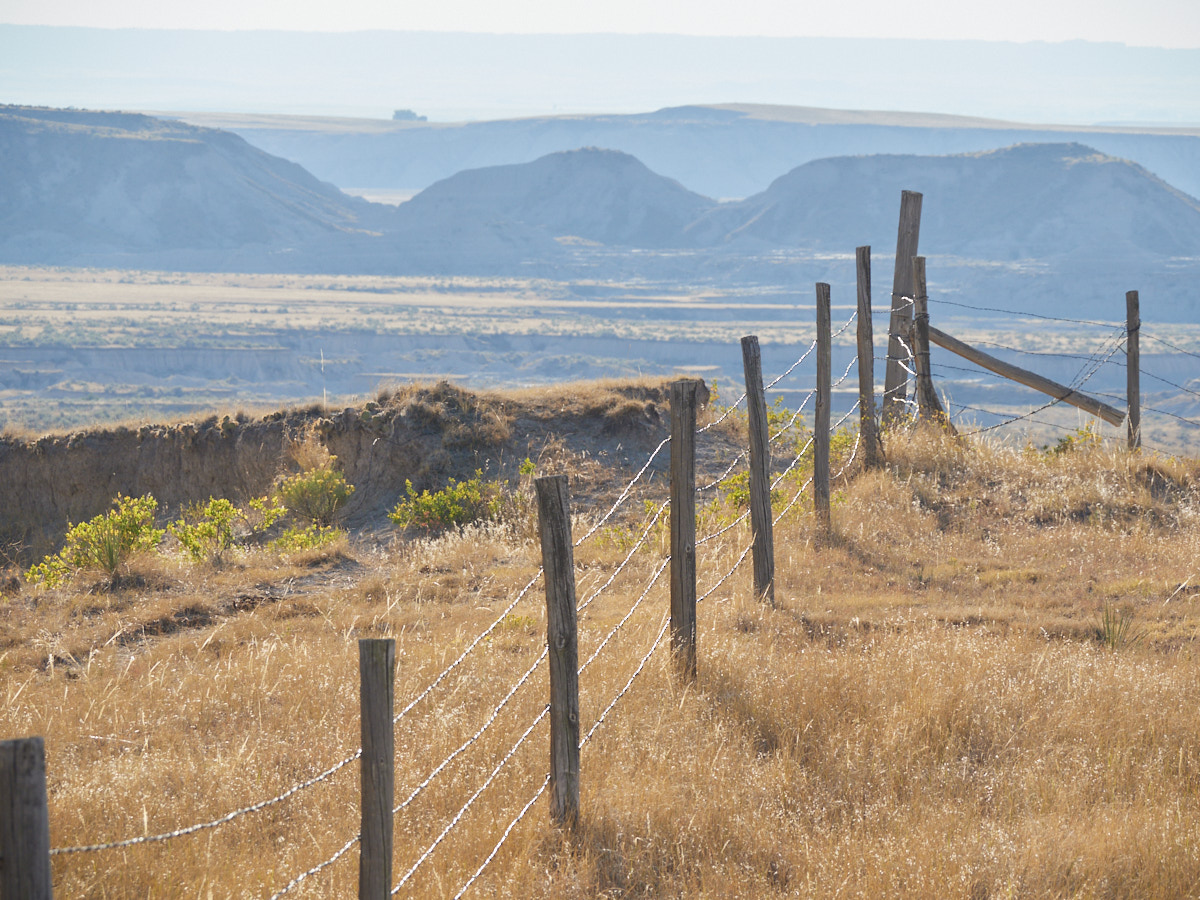 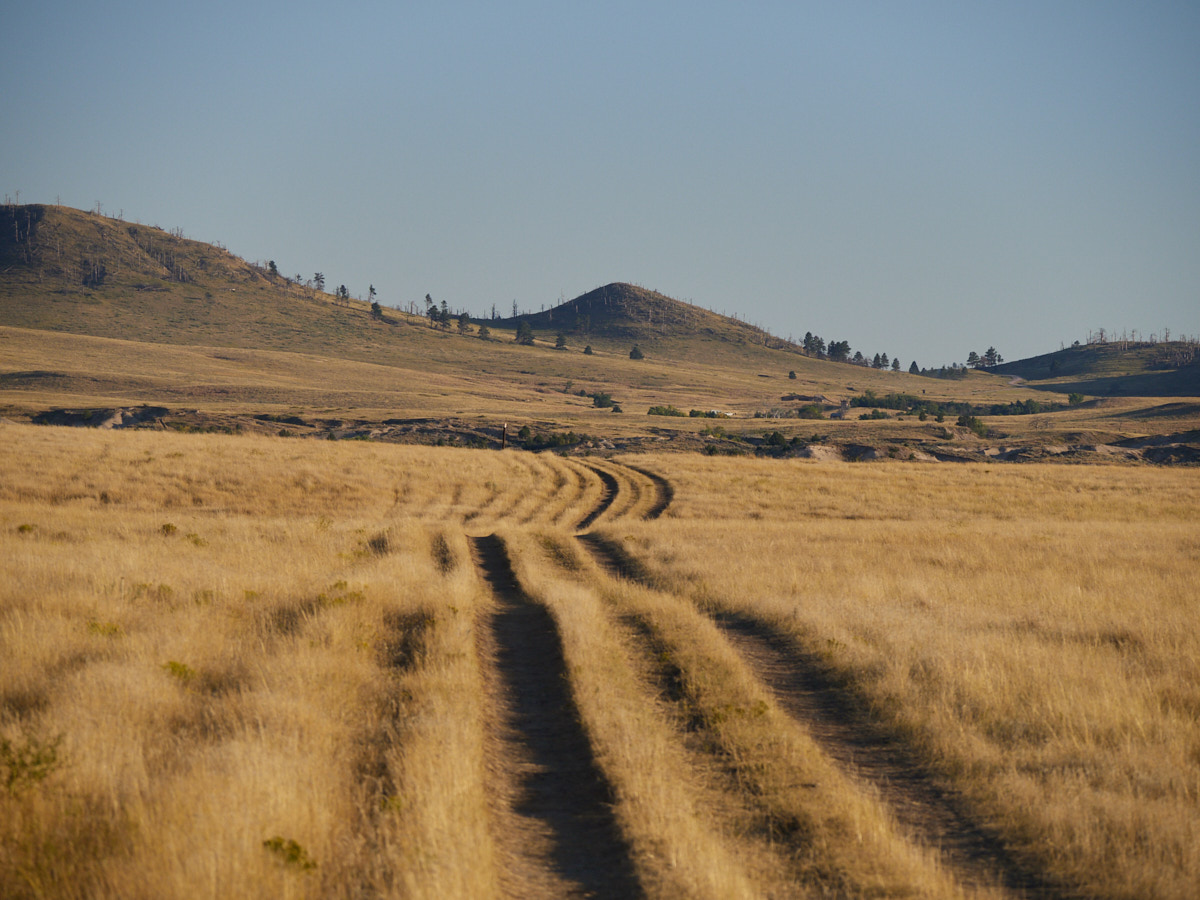 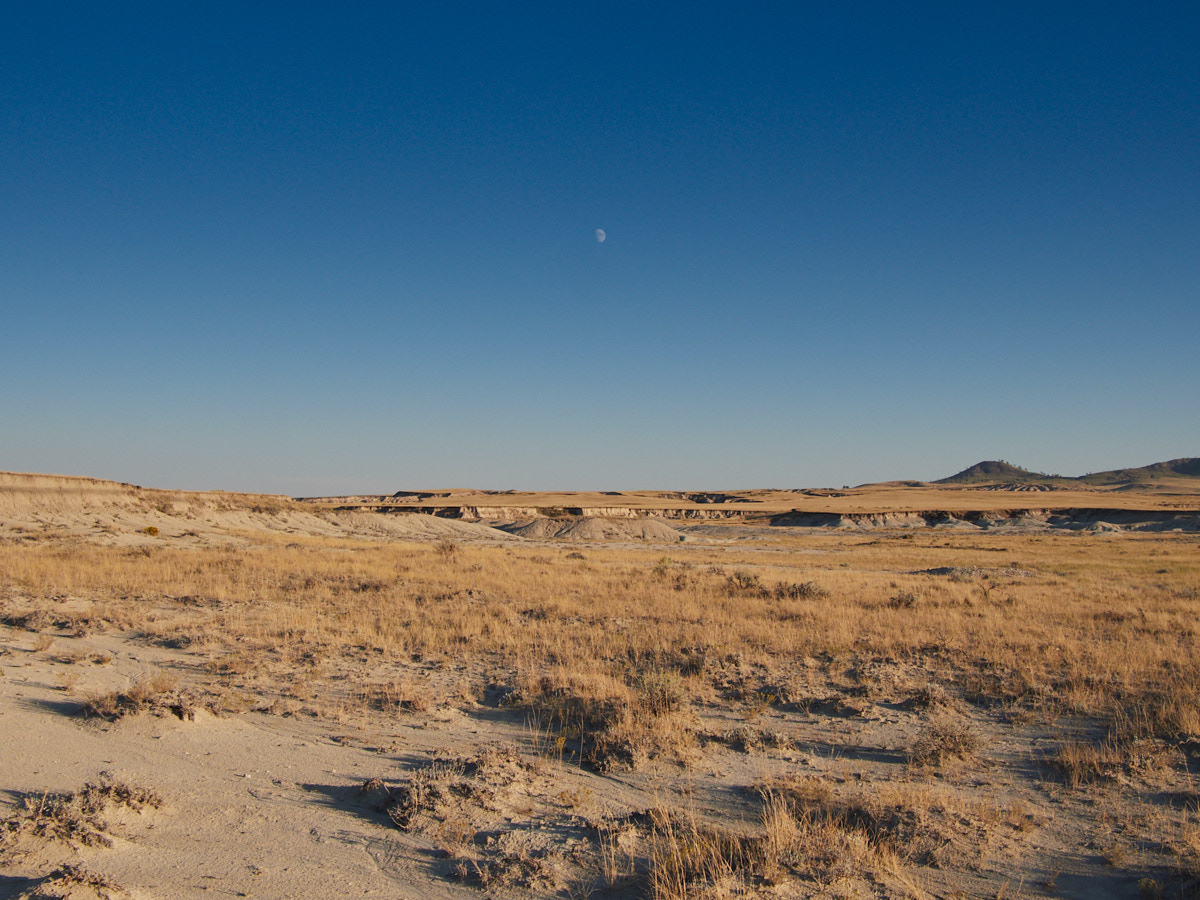 Below the Setting Sun

The trail had a spur which went off to the mammoth site.

Given the time when I started the trail and my pace, I assumed I wouldn't have enough time to head there.

And indeed, the sun was setting when I got back to the campground. I chose wisely. 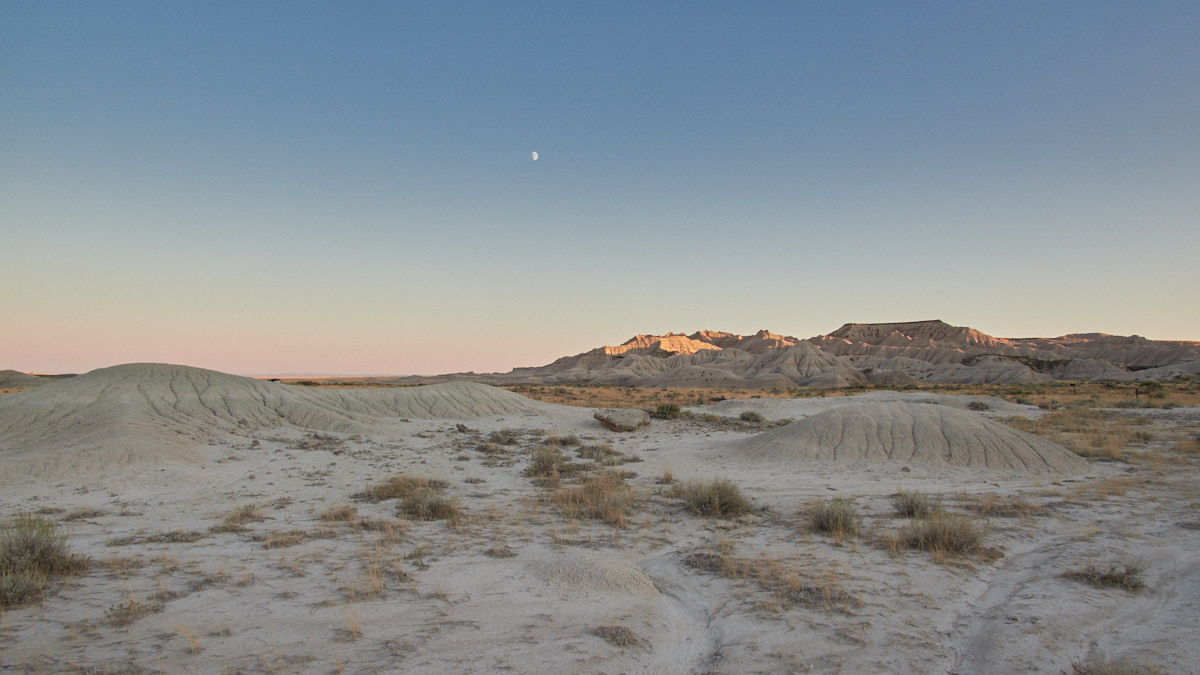 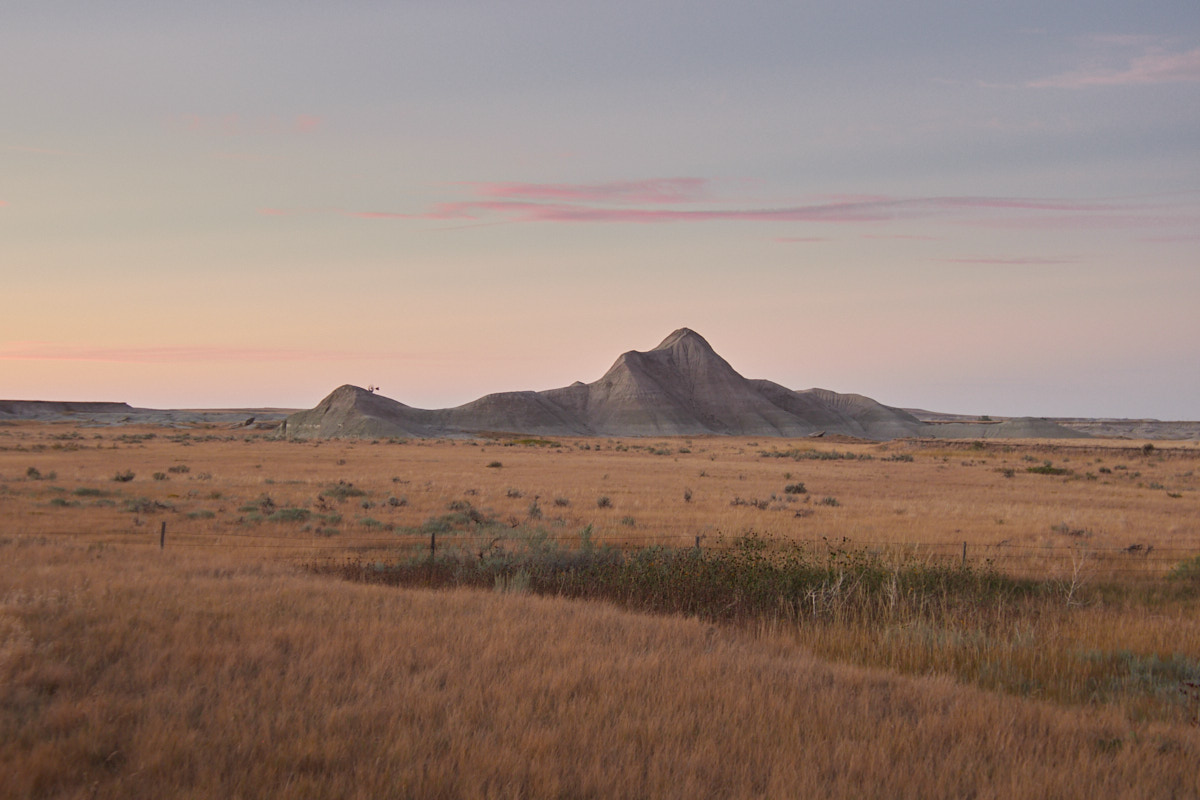 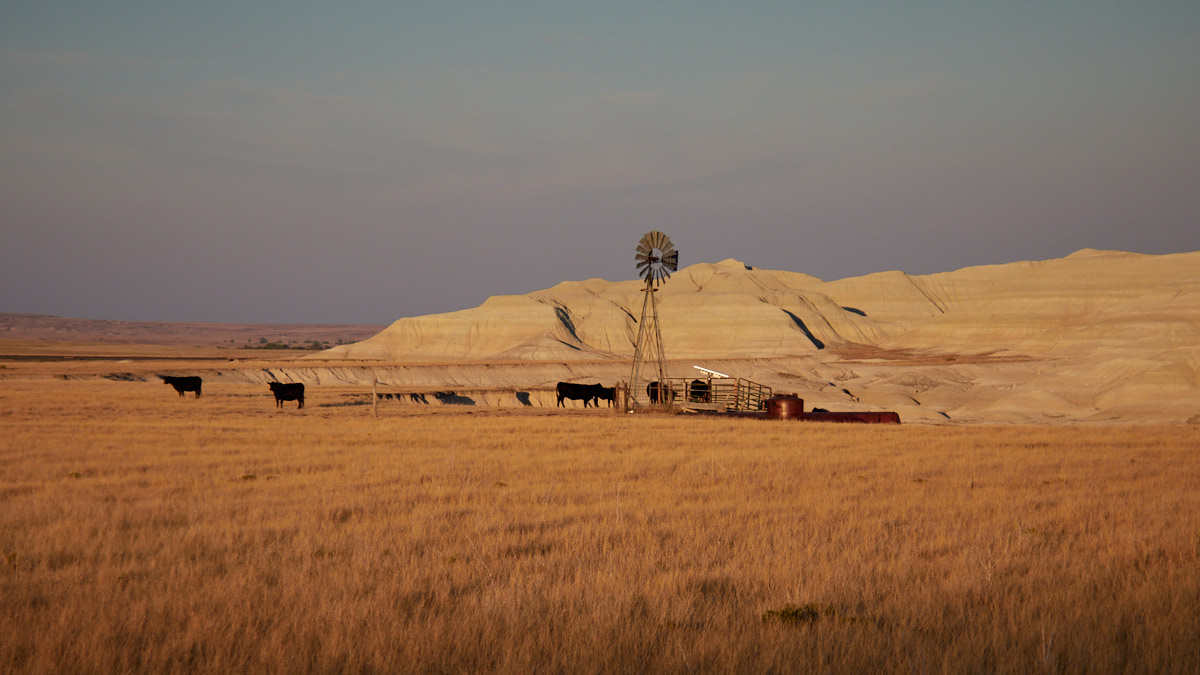 A few reasons for the cow gates.
× 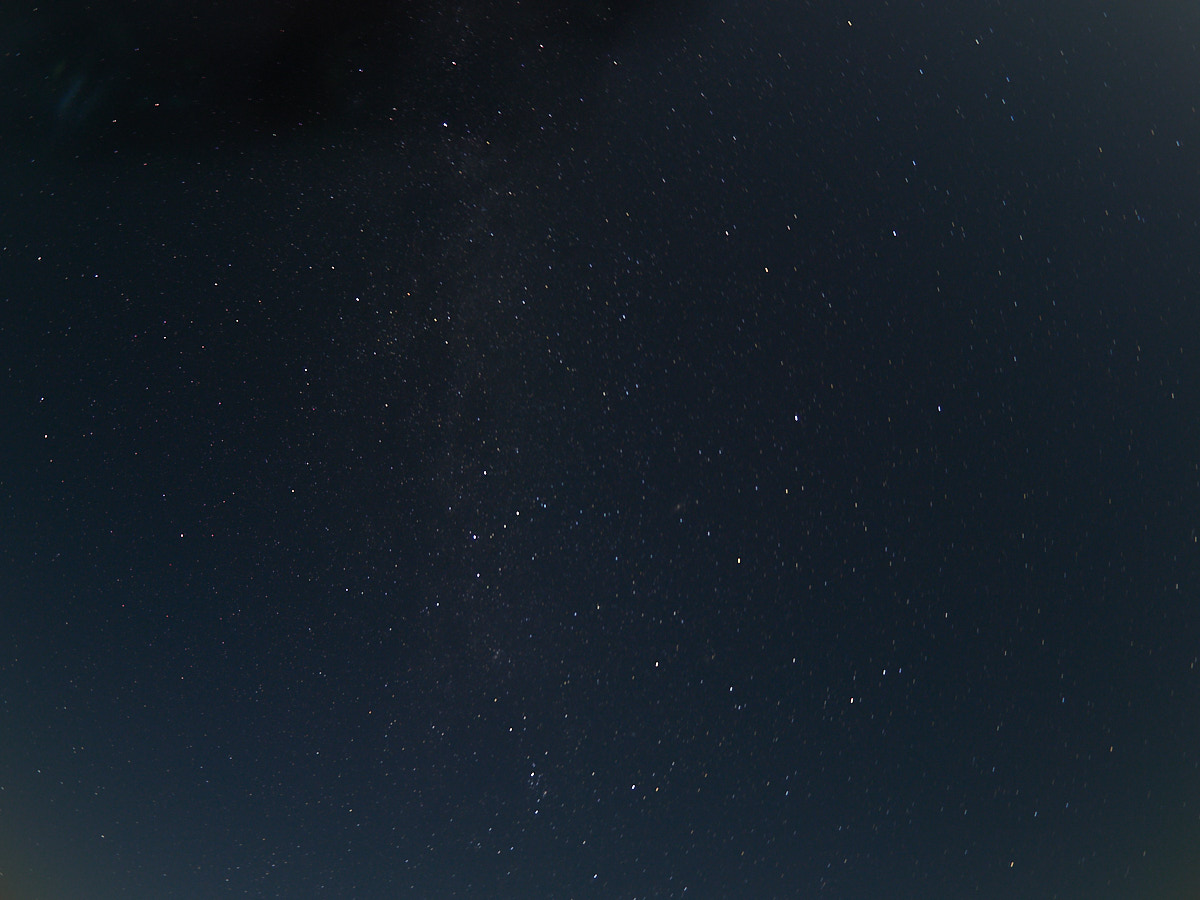 The night was pretty clear.
×

Night fell, and I went to bed.

I enjoyed what was easily the warmest night of my trip, with unbelievably warm and temperate weather.

I could have slept out under the stars without a tent, and with barely a blanket, and been comfortable and warm. The sky was utterly clear. 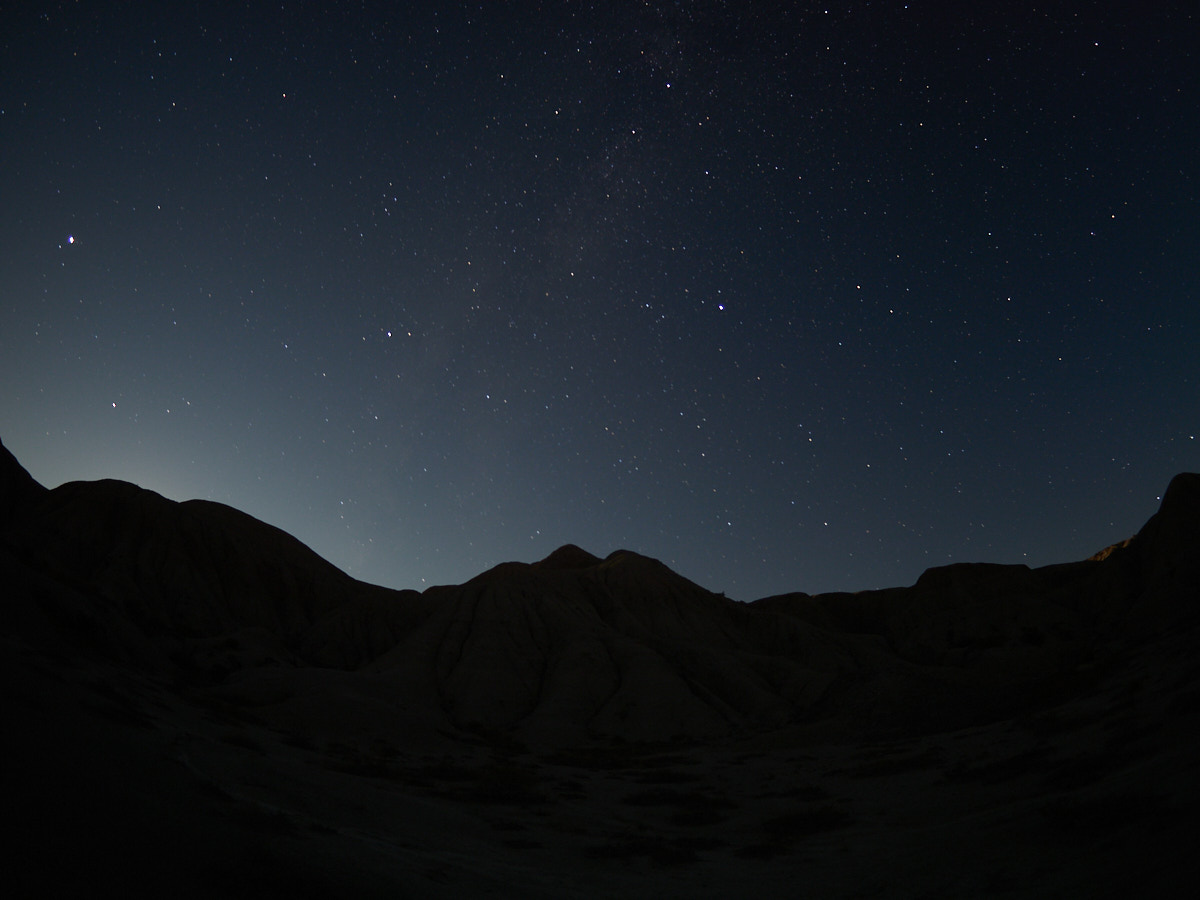 The moon is just behind that ridge, and it was spectacularly bright.
×

Part-way through the night, I roused myself. The stars above were spectacular.

This was easily the least light pollution I had seen so far on my way to Seattle, the best since Maui. I grabbed my headlamp and tripod and hit the trail, taking several long exposures. 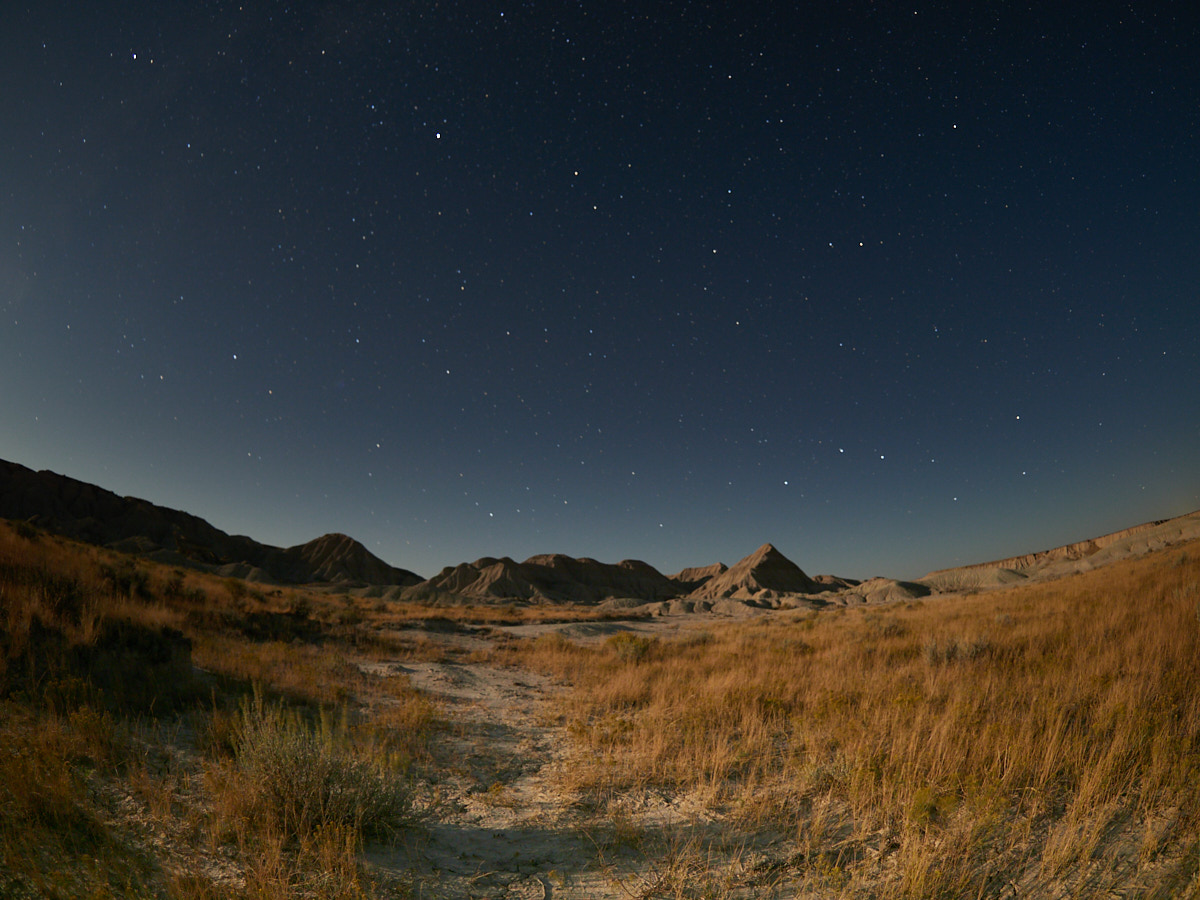 I didn't quite nail focus on all of these, but they're close enough that I'm happy to share. 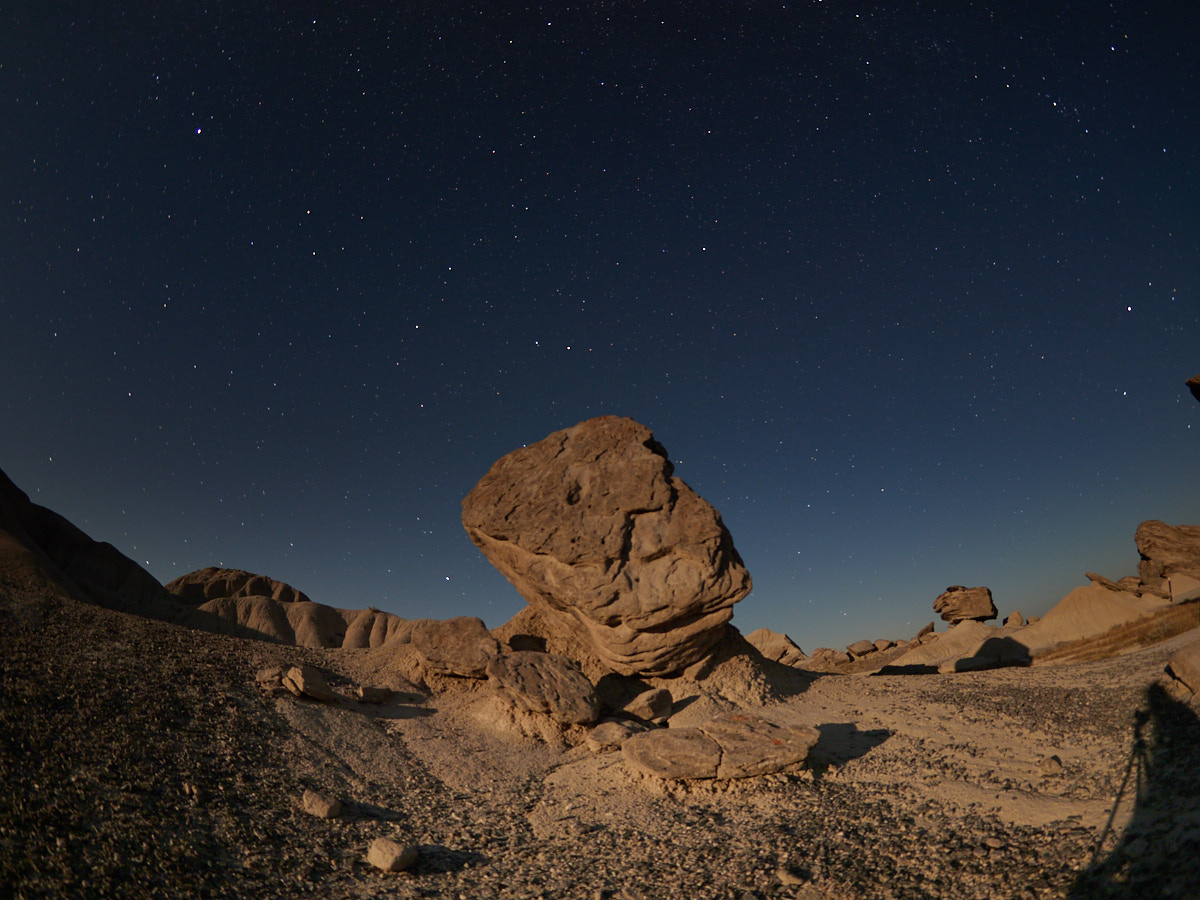 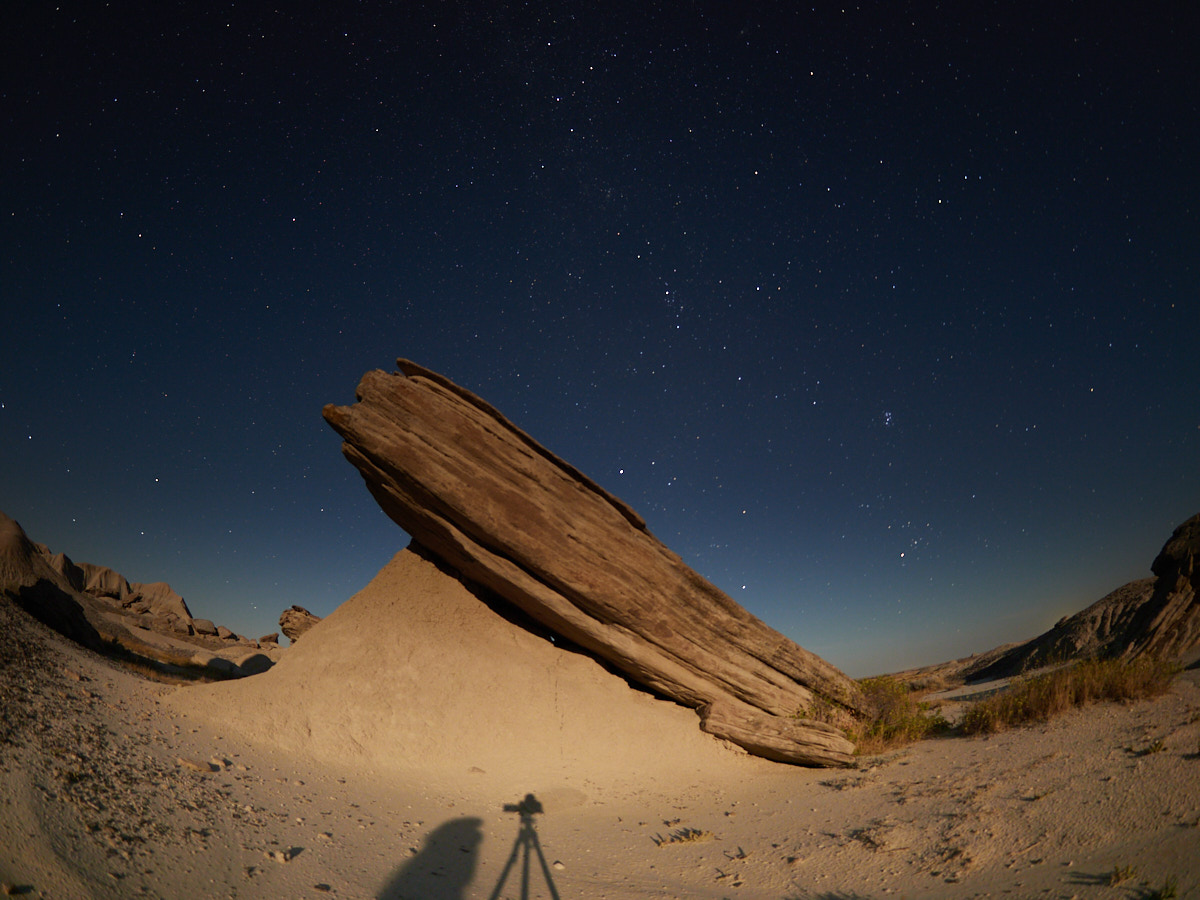 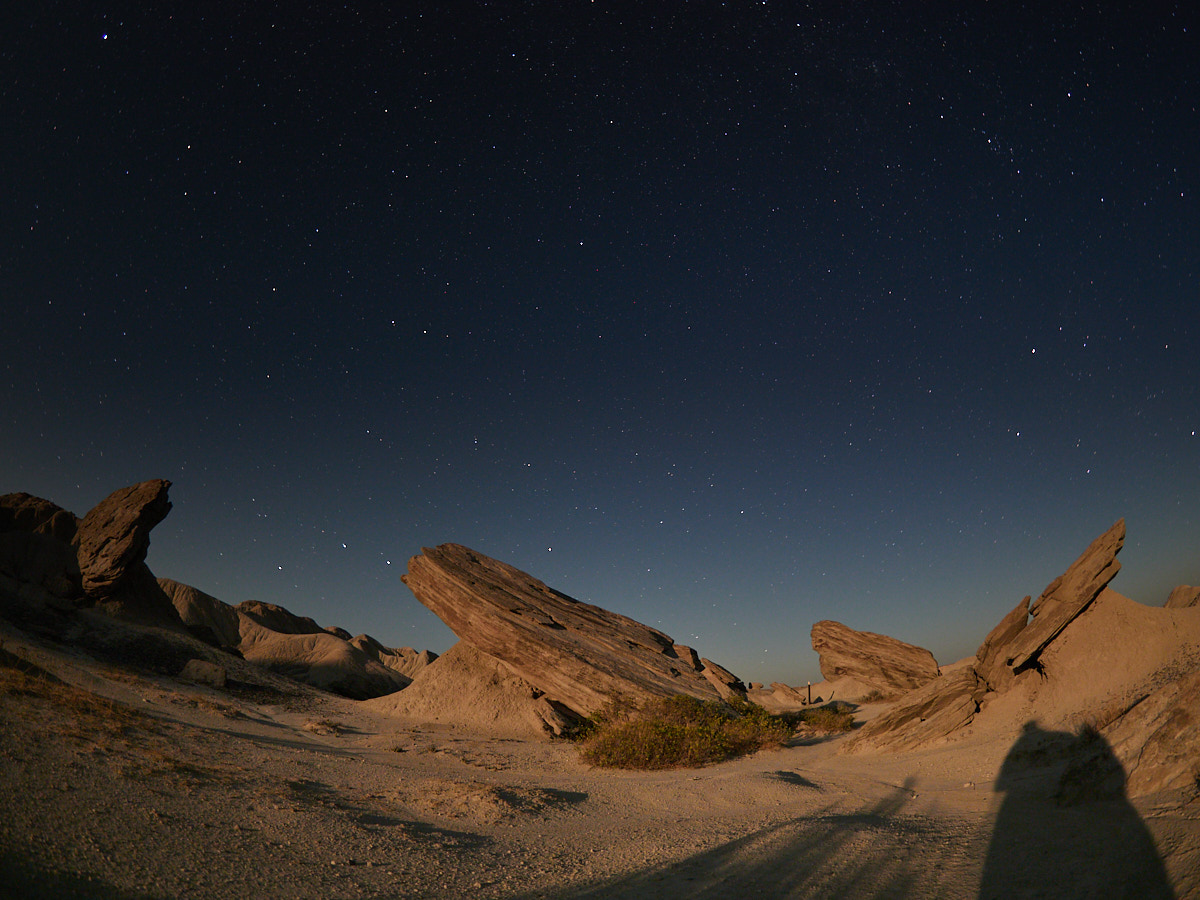 It was the perfect cap to a lovely day in Nebraska!