So, what was happening in the Black Hills in mid-September of 2021?

I woke up bleary-eyed, too lazy to have cold brewed coffee at hand. I took down my tent, and headed back towards human settlements, away from the toadstool-shaped badlands of Nebraska.

My next stop was Wind Cave National Park. And after that, whatever else I wanted to visit in the Black Hills. I wasn't sure if I'd spend a day or two there, but I would have to make up my mind eventually.

My cellphone reception was poor in Nebraska, so I didn't know what time the visitor center opened and I would want to be standing in line for a cave tour. I guessed nine or ten.

An hour or two later, I arrived at the just-opening Visitor Center at Wind Cave National Park. To my dismay, there was already a line extending out of the building for tickets for cave tours.

COVID changed the pattern of tourism in the area. Peak tourist-season style numbers descended upon the Black Hills region of South Dakota in mid September. In any other year, the numbers would have dwindled. In any other year, I wouldn't have been standing in line, hoping that the morning's cave tours would still have a spot for me...

Fortunately, I was able to eek into one of the earlier tours. I killed time filling water containers and checking out the visitor center museum. Then, it was time to visit the cave. 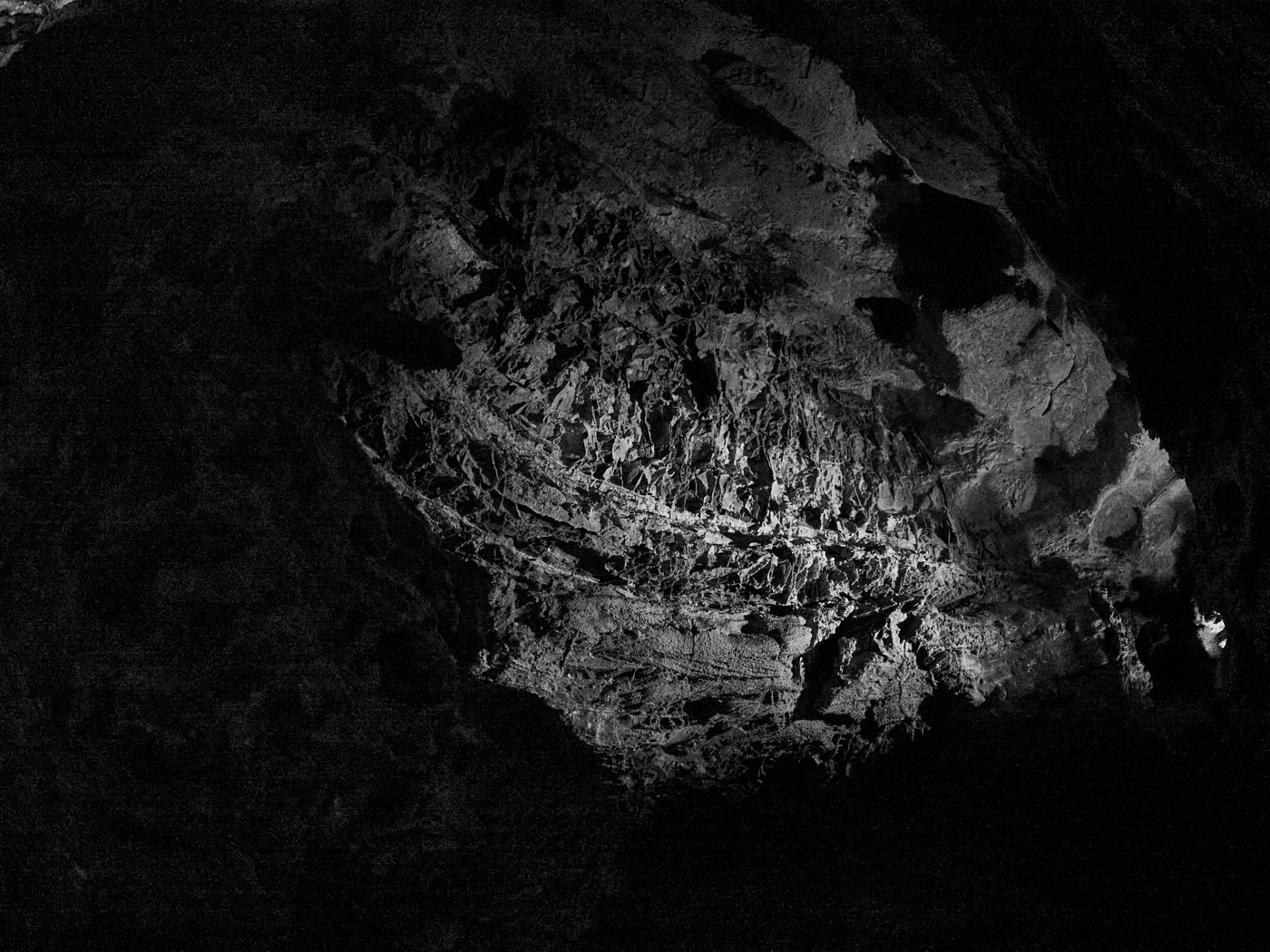 Many caves share the name "wind cave" in English. It comes from physics. Some caves have a difference in air pressure underground compared to the outside world. That means that their openings either suck or blow air depending on the difference between pressure inside and outside of the cave.

The Wind Cave is such a cave. The Lakota believed it to be sacred, a place where man had lived before the world was created.

Non-indigenous people discovered the cave in 1881, allegedly when it blew someone's hat off. Shortly thereafter, the cave became a tourist attraction. An entrance was dynamited open, and various factions fought for ownership of the area, hoping for lucrative natural resources.

Today, it's a National Park, preserving nearby grasslands as well as the titular cave.

This was my first time taking photos inside of a cave. I remembered that my camera had an anti-flicker setting designed to reduce artifacts under certain types of artificial light. I forgot that the electronic shutter, however, also can contribute to banding in these situations. Consequently, a few of my photos are unusable.

The Wind Cave is most famous for box work, a type of cave formation in which deposits are formed along fractures in the rock. Wind Cave National Park boasts some of the most extensive box work in the world. 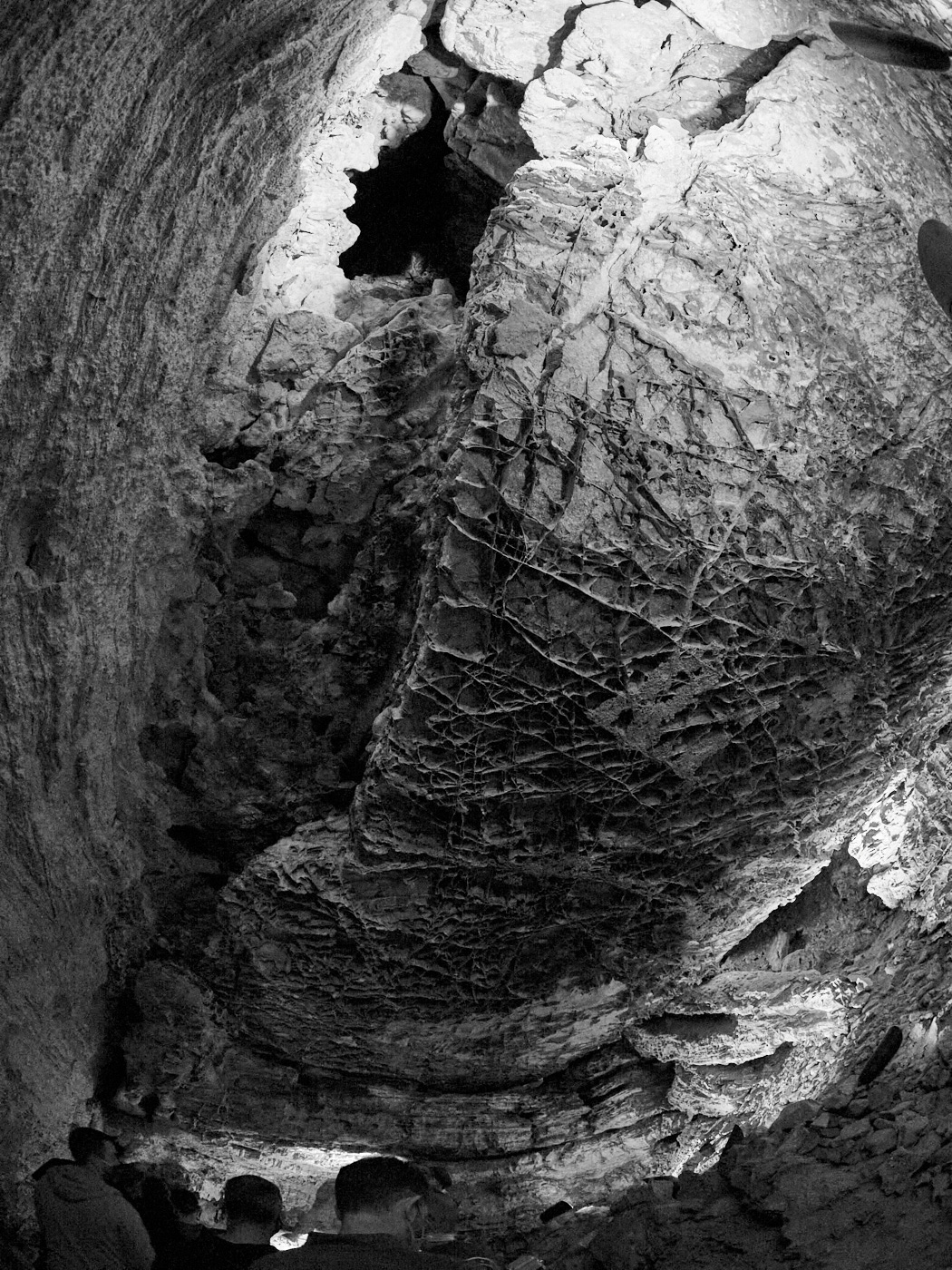 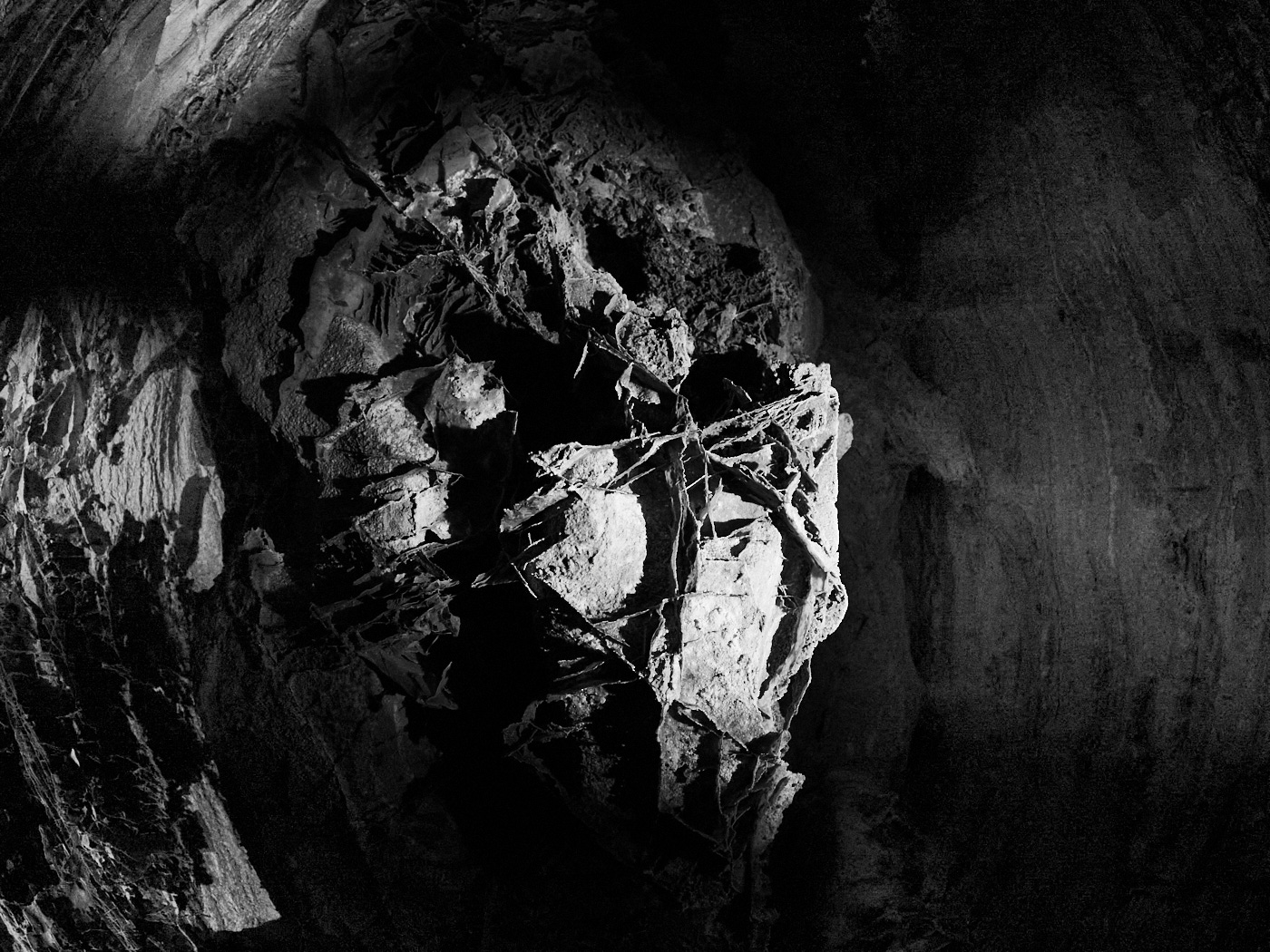 Box work is really the main attraction here. Besides that, the cave does have an extensive, extremely long series of passages, but few of those are suitable for mass exploration.

A lot of friends shared travel tips about South Dakota. Near ubiquitous was the recommendation to check out the Crazy Horse monument, including recommendations to visit it over the more famous nearby Mt. Rushmore. (If you compare the two, the head of Crazy Horse alone is already taller than the whole sculpture of Rushmore -- the LA times has a nice piece that compares the two in context.)

I had never visited before, not when I had passed through the Dakotas as a kid, but I did remember reading about it, maybe at school or in a Boy's Life magazine, and thinking that it seemed a bit silly to visit an unfinished monument.

Well, let me tell you. It's one fantastic unfinished monument, and one cool cultural center...

The monument is impressive. The museum is very nice, though personally I would have liked some more editorializing and contextualization of the art work on display.

The history of the monument, though is super impressive. 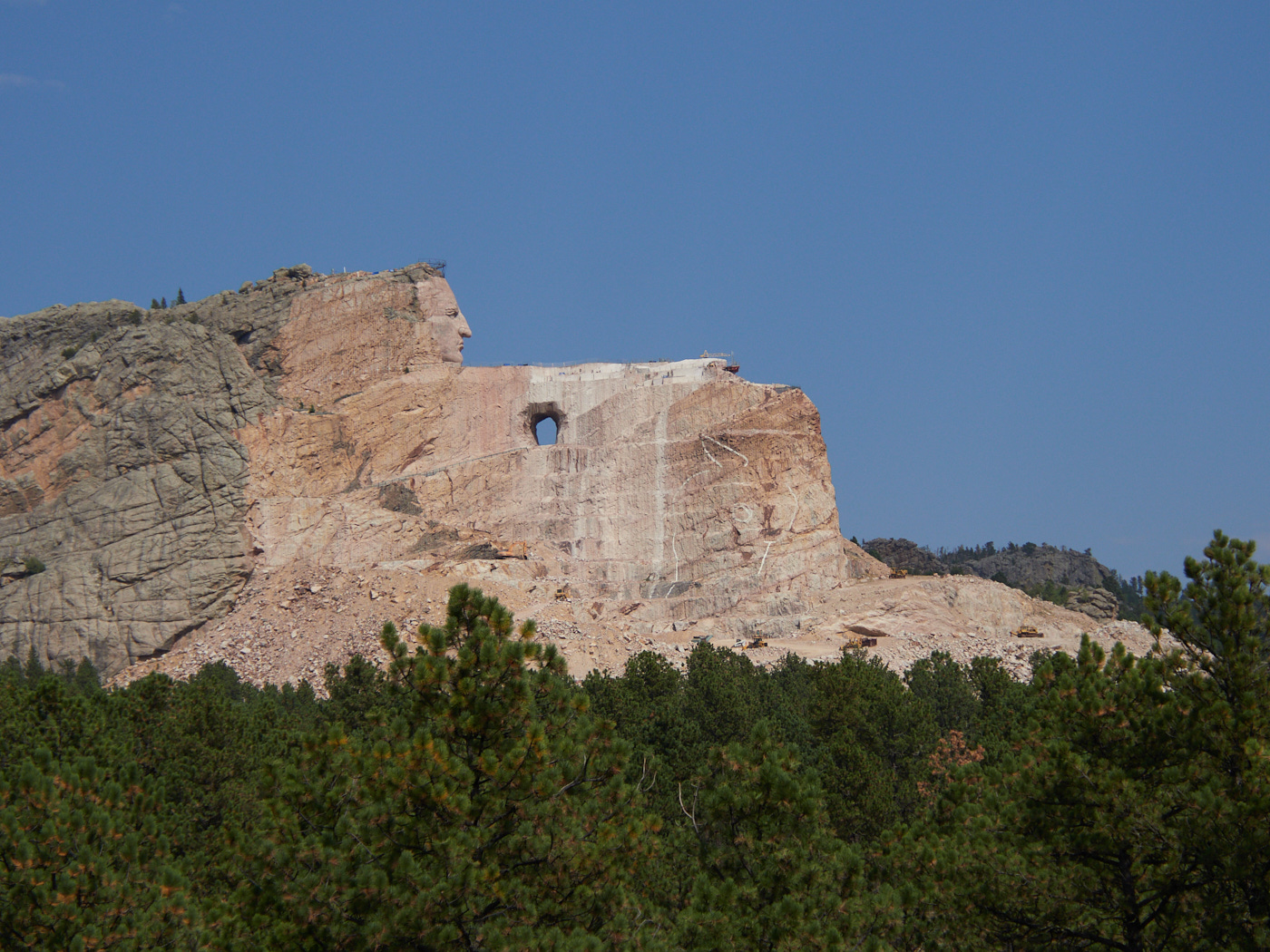 In terms of modern performers, Star Chief Eagle was around to do a performance, cleverly after a question and answer session designed to dispel audience's preconceptions about Native Americans, (e.g. they don't all live on reservations, and are present across the United States.)

She shared her personal story, her name, and eventually her art. It was a joy to behold.

I had a vague recollection of Custer State Park consisting of twisty-turny forest roads, and some tight, tight tunnels, and that it was beautiful.

Oh, believe me! This is beautiful land. 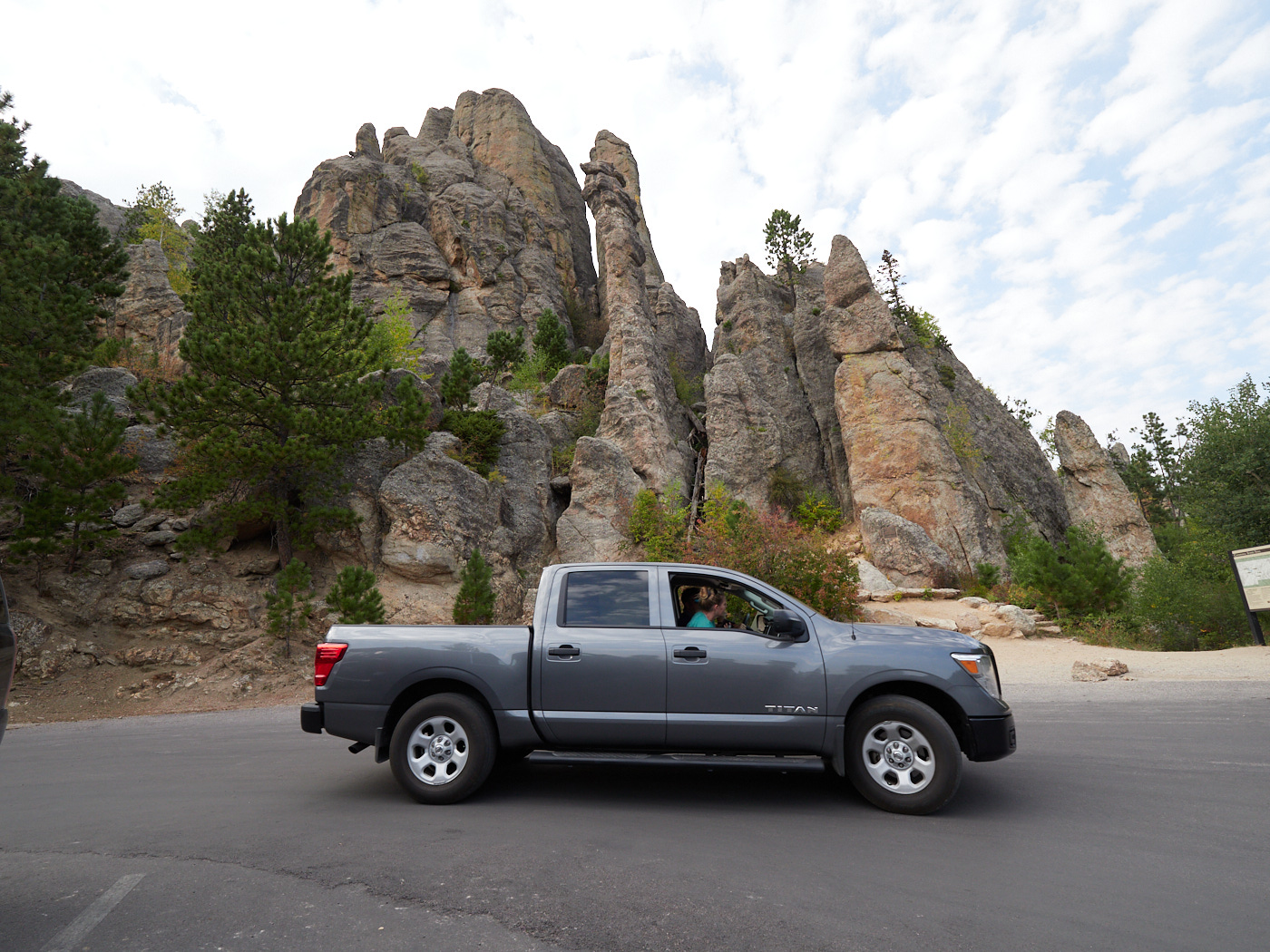 Beautiful land where you should look both ways for pickup trucks before crossing the street...
×

Owing to limited time, I decided to hike the Cathedral Spires Trail.

Some other hikers told me that they had seen mountain goats, but apparently they had ascended the range and gone out of sight by the time I arrived. Instead, I was left to admire noisy red squirrels, and the beautiful scenery. 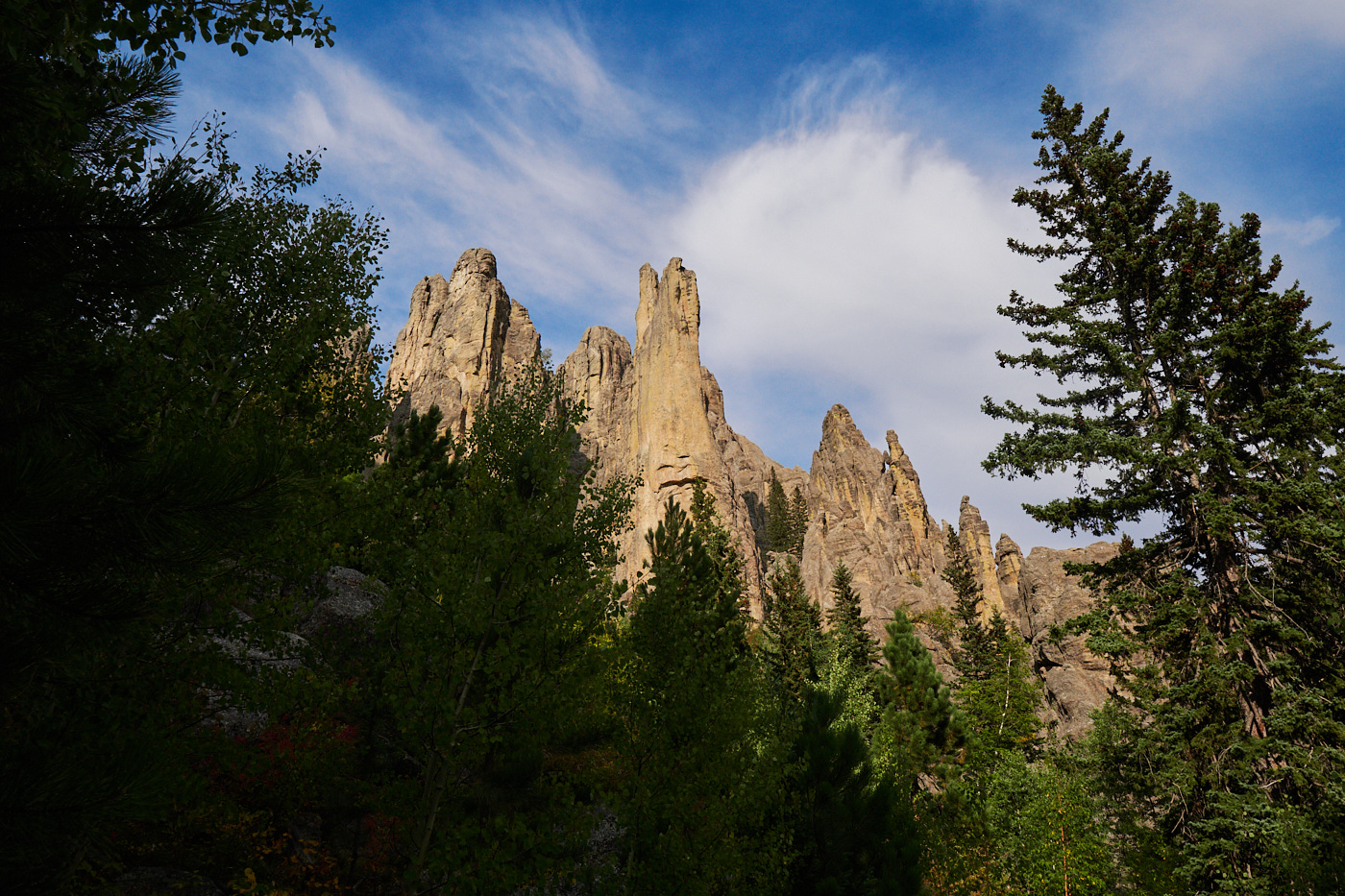 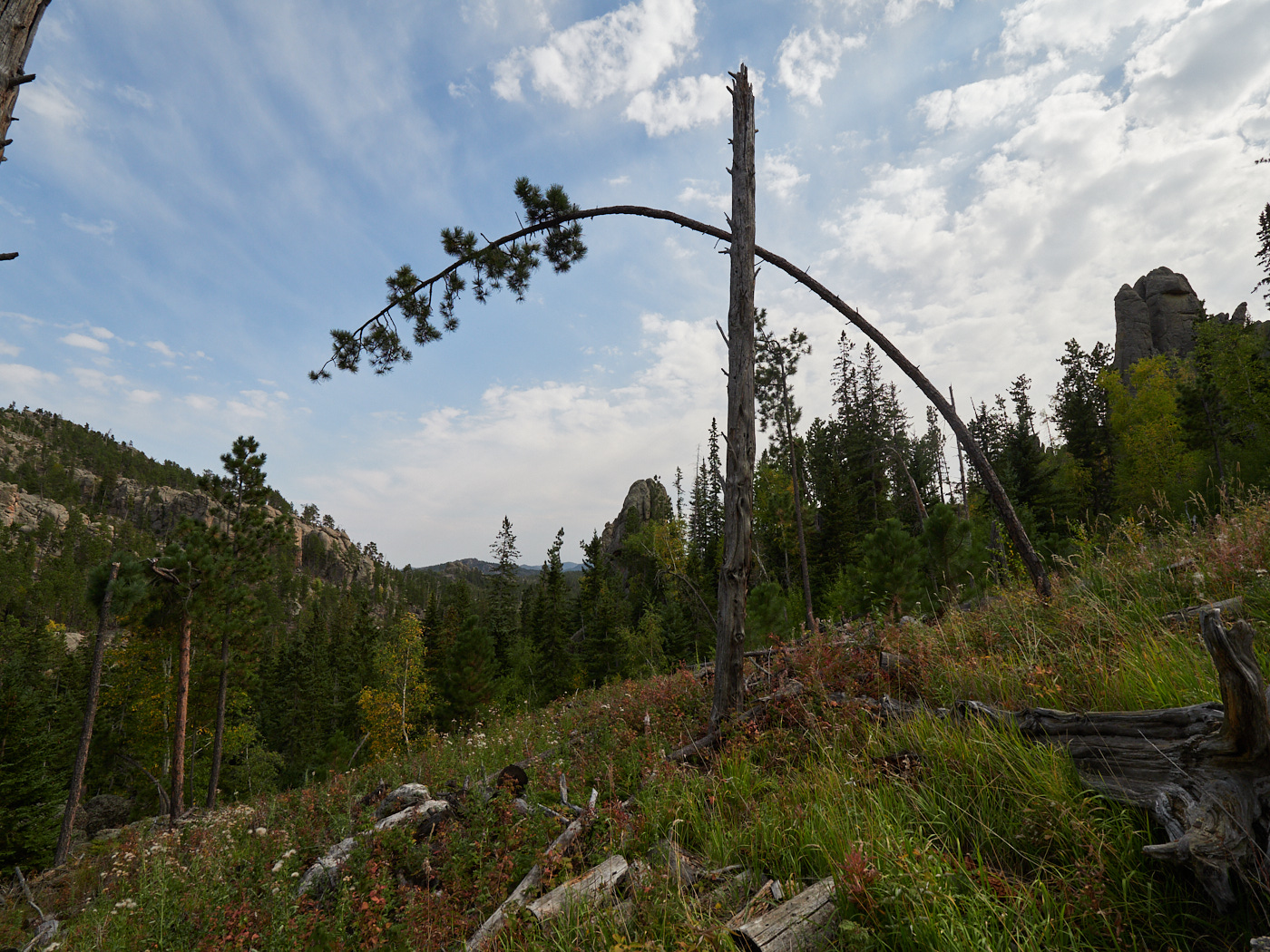 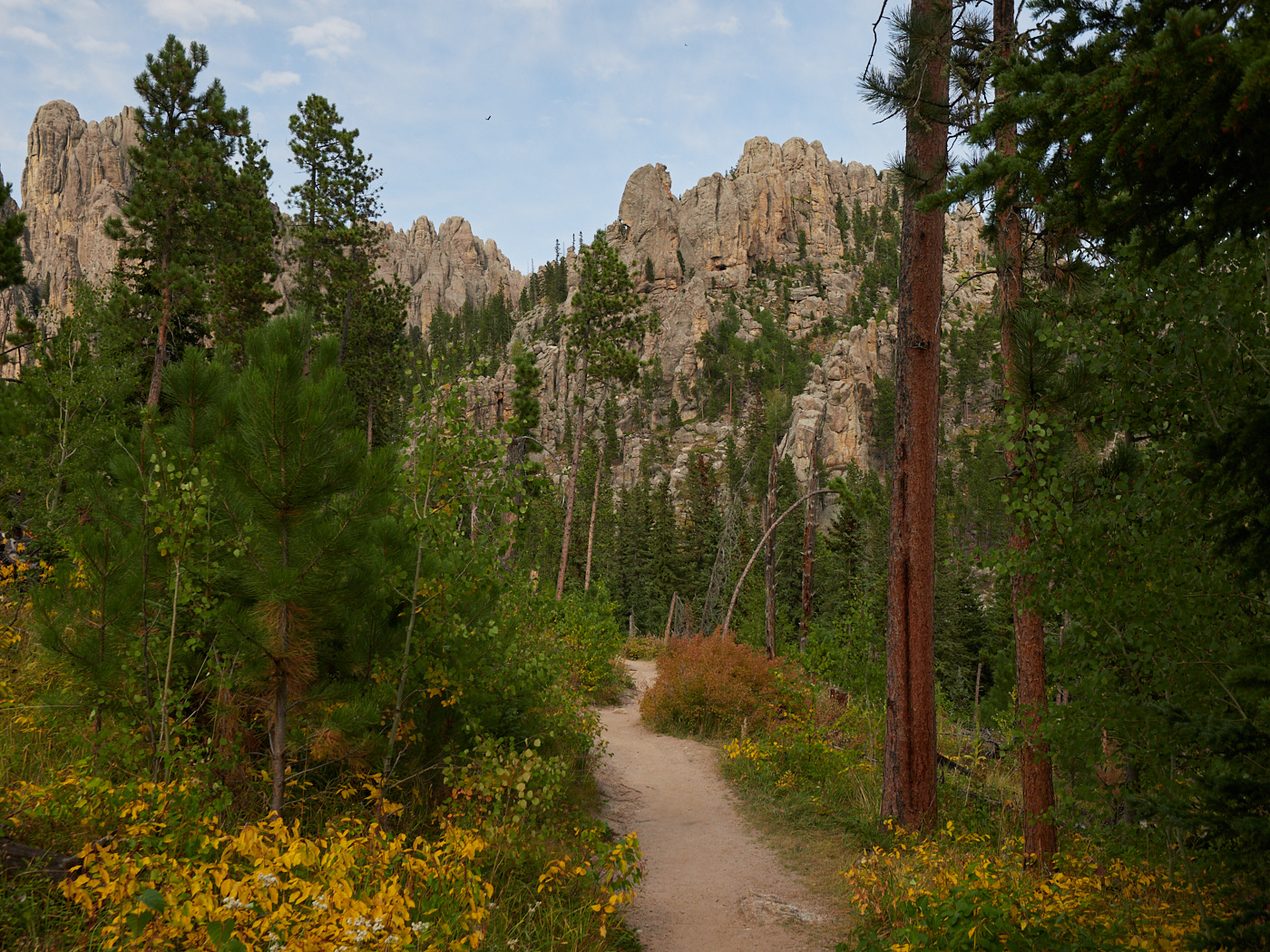 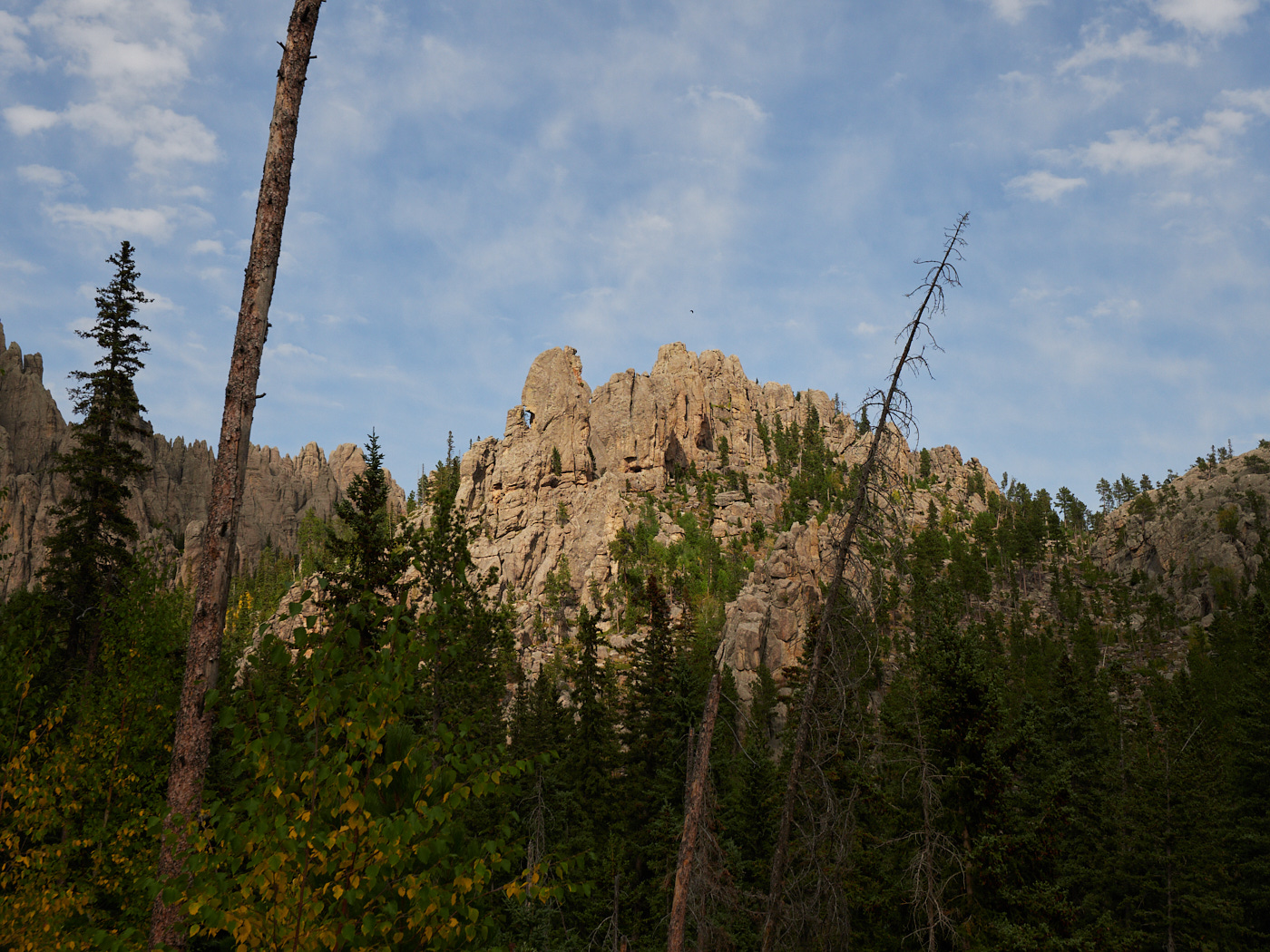 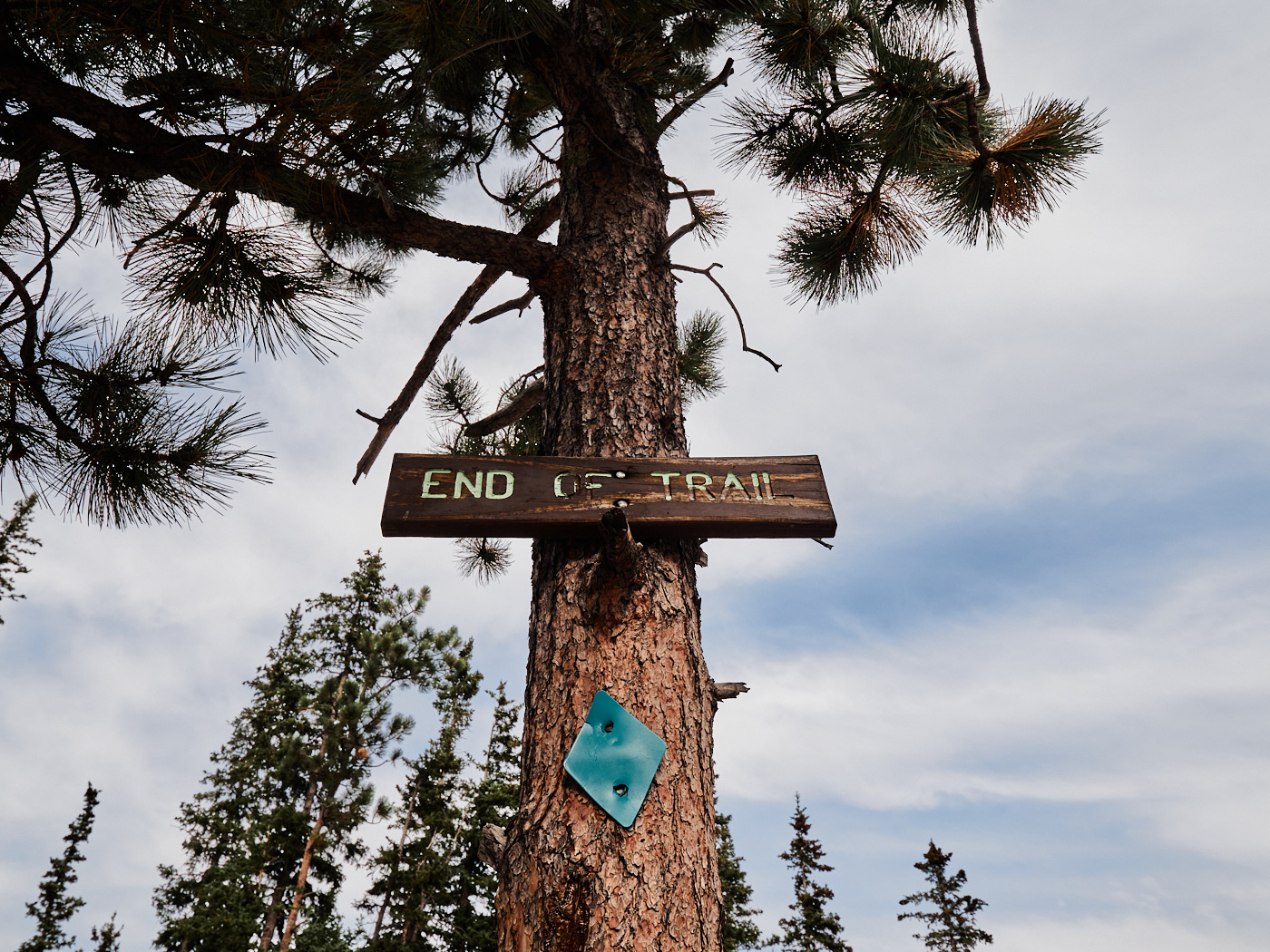 After my hike, I retired to my government-operated primitive campground. This one in particular had a somewhat chatty campground head, who for whatever reason, had a motorhome, jeep, four-wheeler, motorcycle, and array of tacky lights all present in his campsite.

Once I demonstrated that I in fact knew where the restrooms were, explaining I had already used them, I was left in peace to go to sleep.

The next day, I would leave South Dakota behind.