This marks the 19th post in this series on my road trip from Pennsylvania to Seattle, and as such, it is has finally overtaken "Attractions of Pennsylvania" for the longest "series" on this blog. What a milestone!

In my last post, I finally arrived at the place I was most excited to visit in my drive across the United States, Yellowstone National Park.

After discovering that conditions were just a touch colder than I was prepared for during the daytime, I began heading towards a campsite and a warm meal. Traffic ground to a halt. I figured the cause was some sort of relatively rare animal, causing drivers to slow down and snap pictures from the middle of the road, an annoying penchant of Yellowstone visitors seeing their first buffalo.

As it happened, I was almost completely correct in my guess about the material reason for being in first gear.

The only thing I was wrong about was the type of animal.

It wasn't a buffalo.

On the Breeding Habits of Elk

Elk have rather intense breeding practices. You can see these firsthand quite easily during 'rutting' season, which typically peaks in September, like when I was visiting for the park.

For starters, elk are polygamous. A male elk can have upwards of thirty ladies in his harem, generally gathering as many as he can. In fact, the male elk is so engrossed in mating and controlling his ladies that he oft' fails to fulfill some of his own needs. For example, forgetting to eat.

Male elk let out mating cries, and fight, especially against younger males who try to sneak in and mate...

So, during breeding season, the park echoes with cries of horned elk announcing their horniness. As elk come down from the frigid highlands, many of them settle quite close to the park's roads. Causing traffic jams.

As I got to Mammoth, WY, I had planned to consider stopping. It was home to an overpriced, overstuffed restaurant, which I passed up. It was also home to a post office where I dropped a few postcards to friends and family elsewhere.

And, it was home to the cause of the traffic jam, some elk hanging out. Rangers stopped tourists from approaching them too closely, whilst answering questions.

I snapped a few pics, but I felt like the setting, a small settlement within the park, meant that they would very much lack a "naturalistic" touch.

I'm not a huge fan of these, but they're worth it if you want to see a bull elk with a huge rack get up close with a tree, while some nearby ladies chew grass. 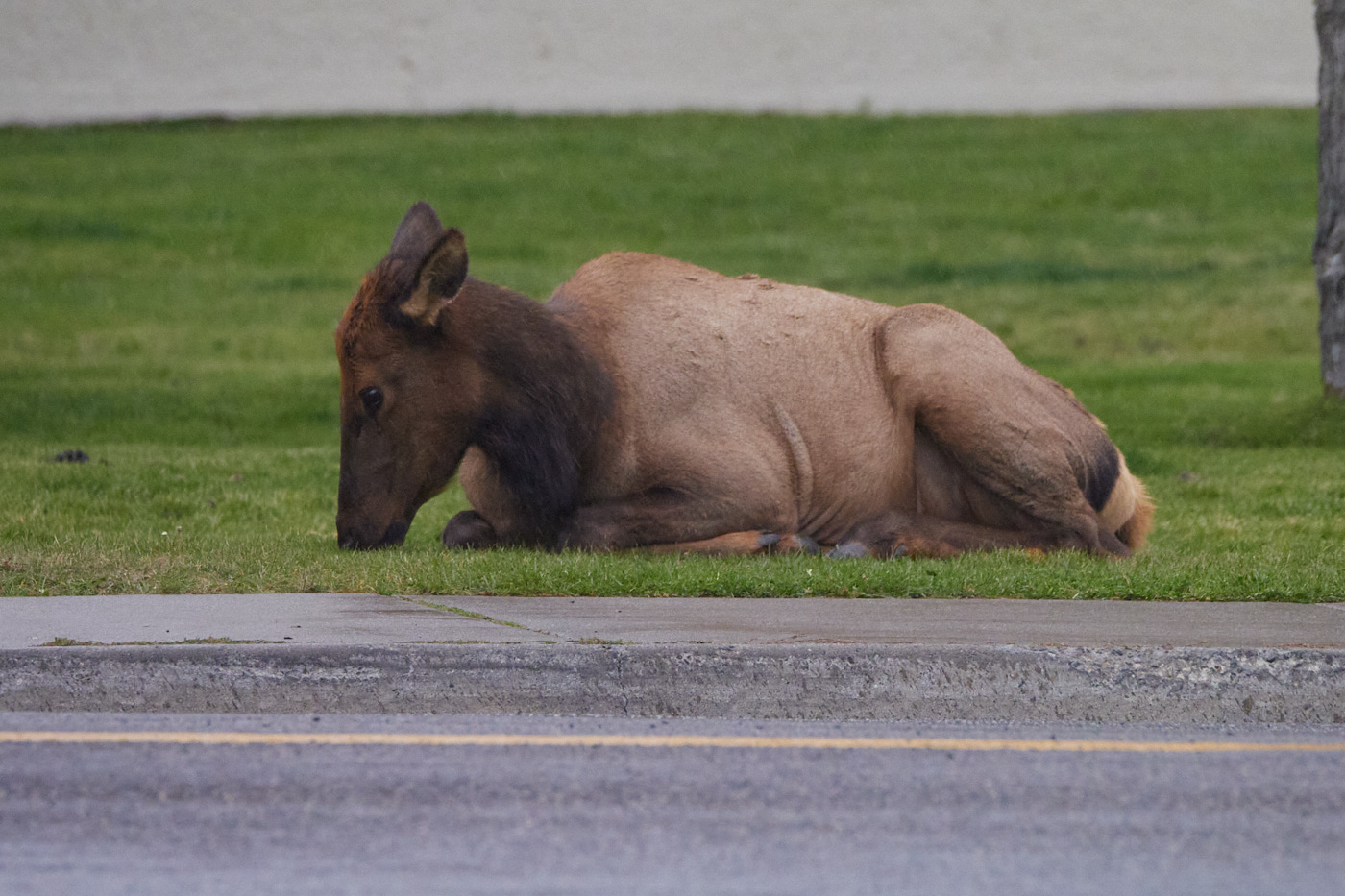 Nothing more idyllic than munching grass right next to the road.
×
× 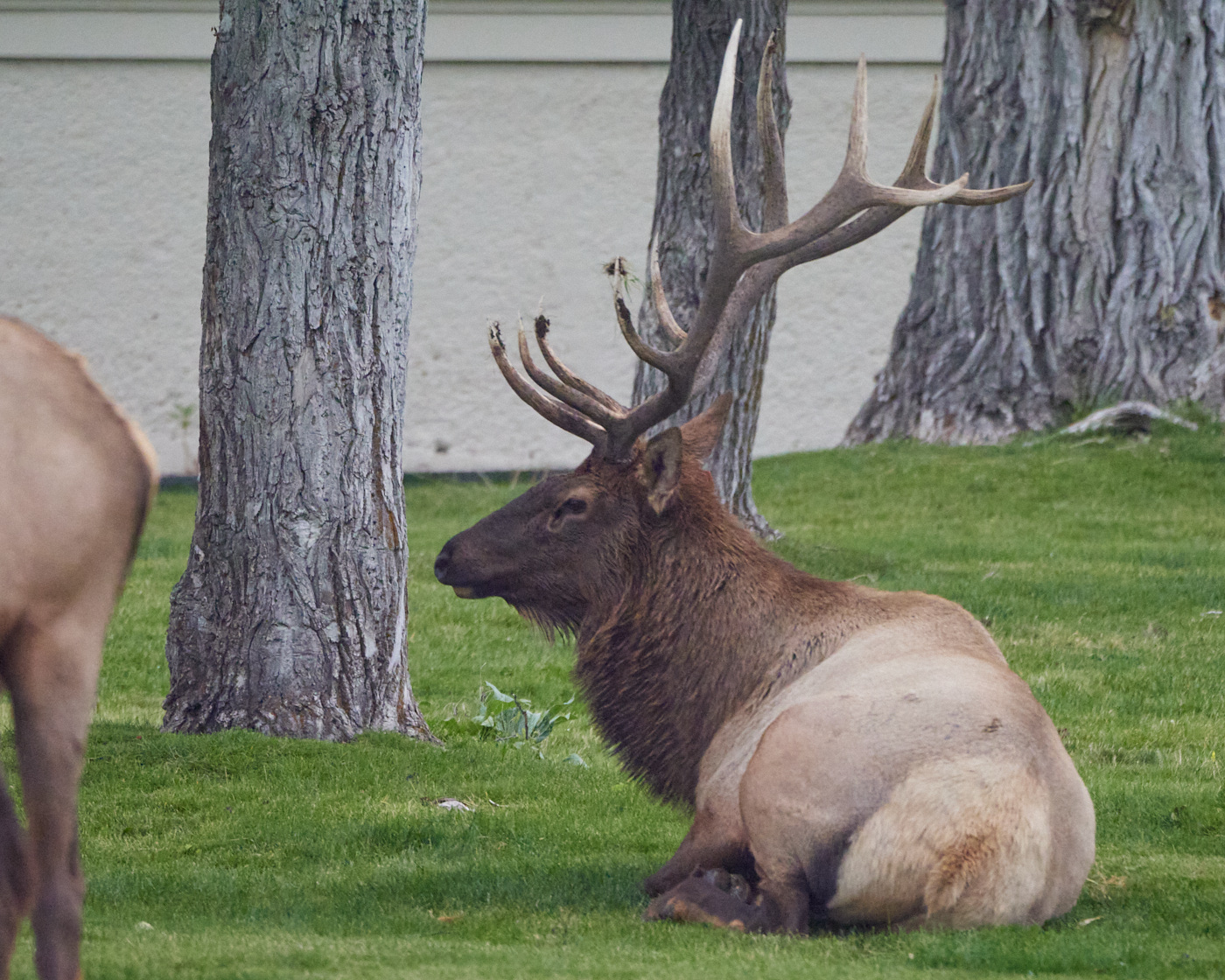 This lad is admiring that lady's rear. I think. I could just be projecting here.
×

I also apologize for the crooked framing in these next two. Fixing it would mean cropping some of that dank rack, and the dank rack is what brings the ladies to the elk harem. So crooked, the phot's remain. 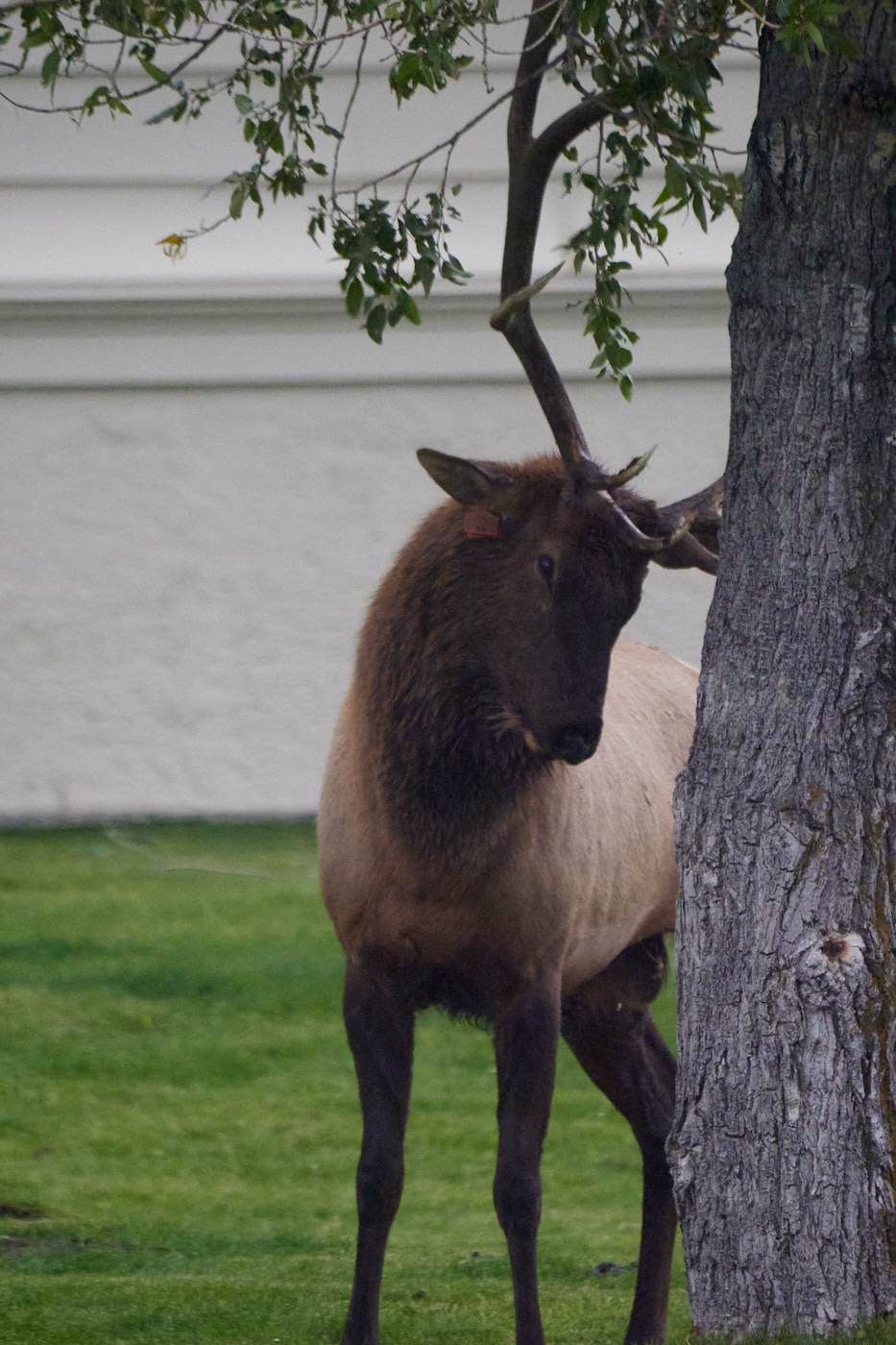 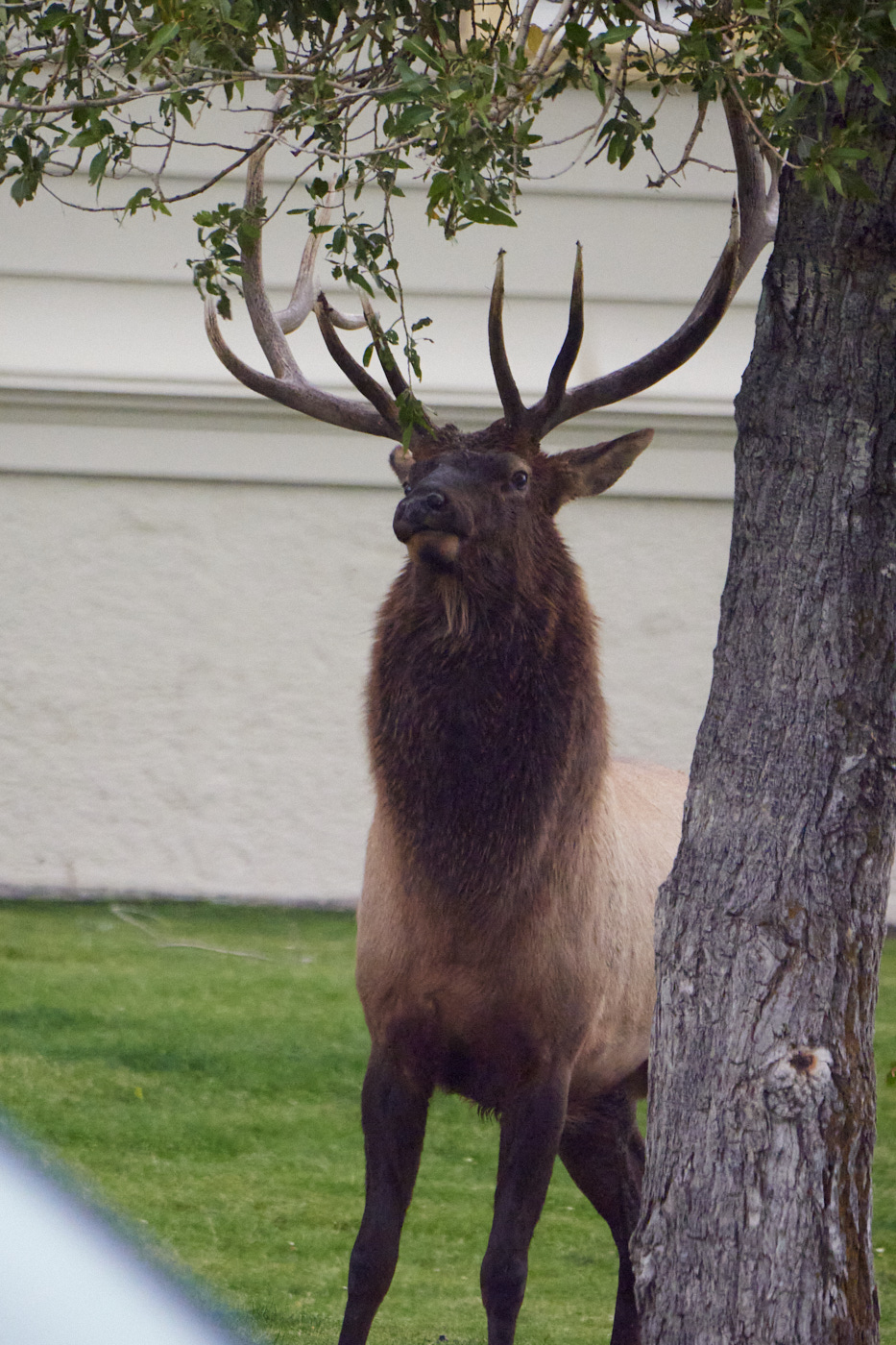 One Day's End And Another Day's Beginning

At the end of the day, I crossed out of the park (and Wyoming) and into Gardiner, MT for a warm (mediocre) meal. Lines were long, cost was high, but somehow, driving around switchbacks down the mountain seemed more appealing than breaking a backpacking meal out of my stash and cooking it at a campsite.

I took the pizza back to my campsite, where I set up my car camping tent.

Reflecting upon most of my first day at Yellowstone, I felt like the parts I enjoyed the most, felt were most special, and felt were "lowest risk" were some of the park's geothermal features.

As I lay in my tent floor, internet-free with my iPhone and its poor battery life, I added points to a downloaded map, coming up with a structured plan for the next day.

In the morning, I awoke to a coating of frost on the outside of my tent for the first time. I snapped a quick selfie, one of the few iPhone pics to survive my post-trip accidental phone wipe.

Though I had made reservations to sleep two nights at Mammoth Campground, when I booked them back in Pittsburgh, I was unable to reserve two nights in the same campsite.

Fortunately, many campsites that had been reserved were unoccupied, their denizens presumably not hearty enough for frosty tents and frigid temperatures. And perhaps, their ears were unaccustomed to the eerie elk mating cries, which did not cease with nightfall.

My next campsite was unoccupied, so I could pick up my free-standing tent and move it over there.


There Were Elk in the Way

Specifically, a cow elk was munching plants right in the campsite I was supposed to occupy. Close proximity was inadvisable for a number of reasons, including the desire to avoid drawing ire from any potential men elk lurking in the distance.

I kept my distance, and grabbed my camera, getting some elk portraits from a variety of locations around the Mammoth Campground. 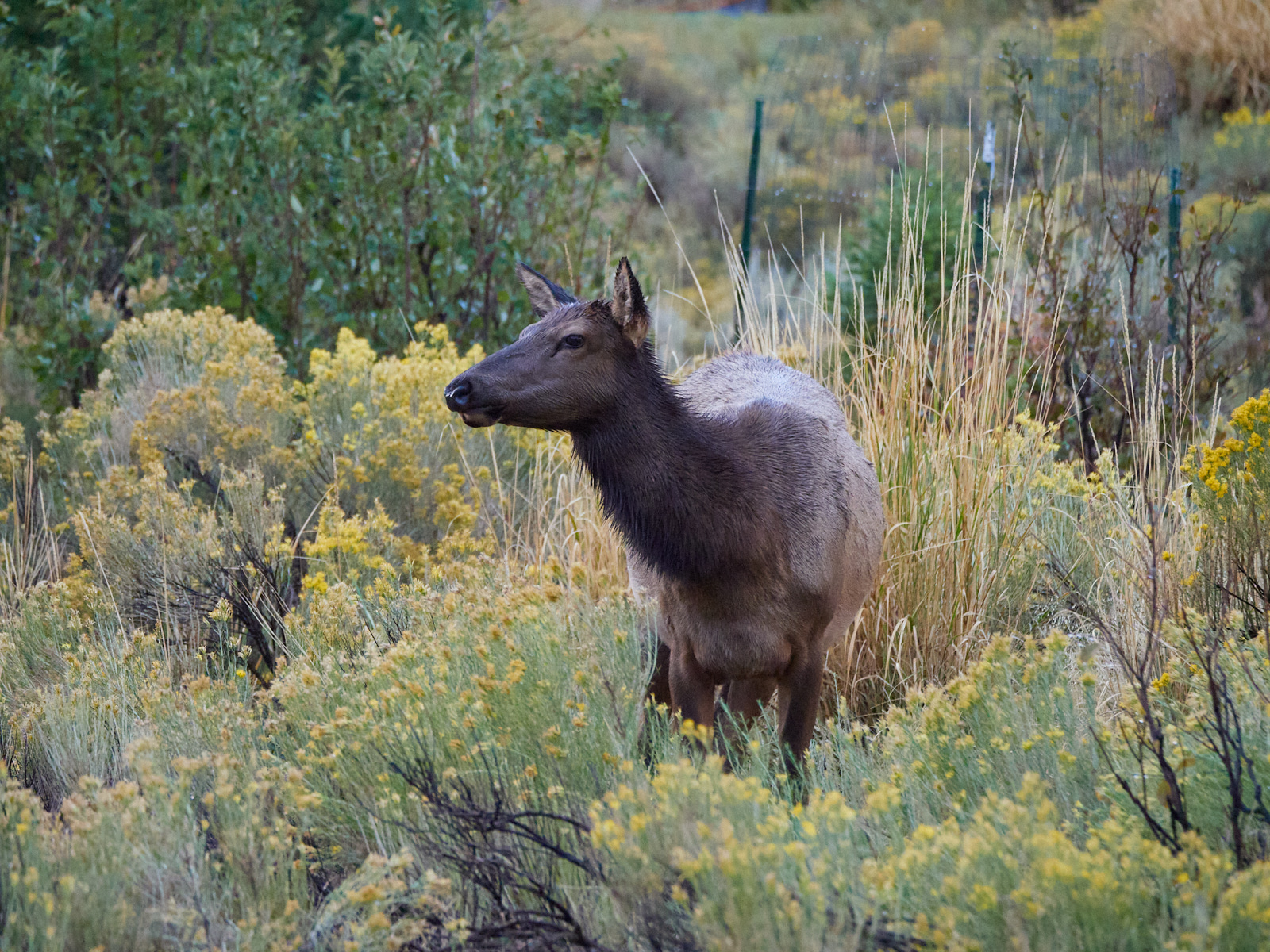 Lots of good vegetation to munch on.
×
× 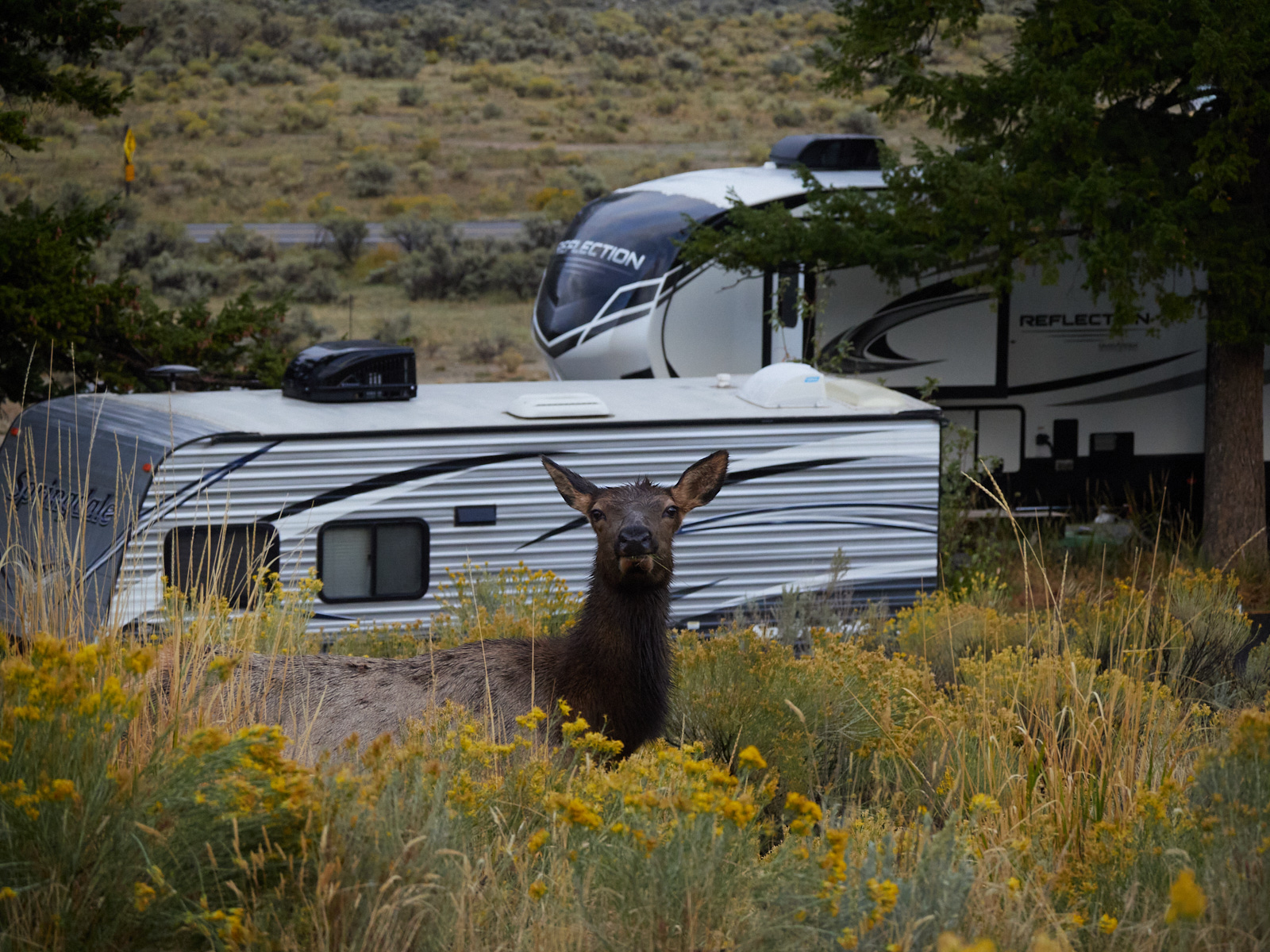 Nothin' more idyllic than an elk in front of a trailer
×
× 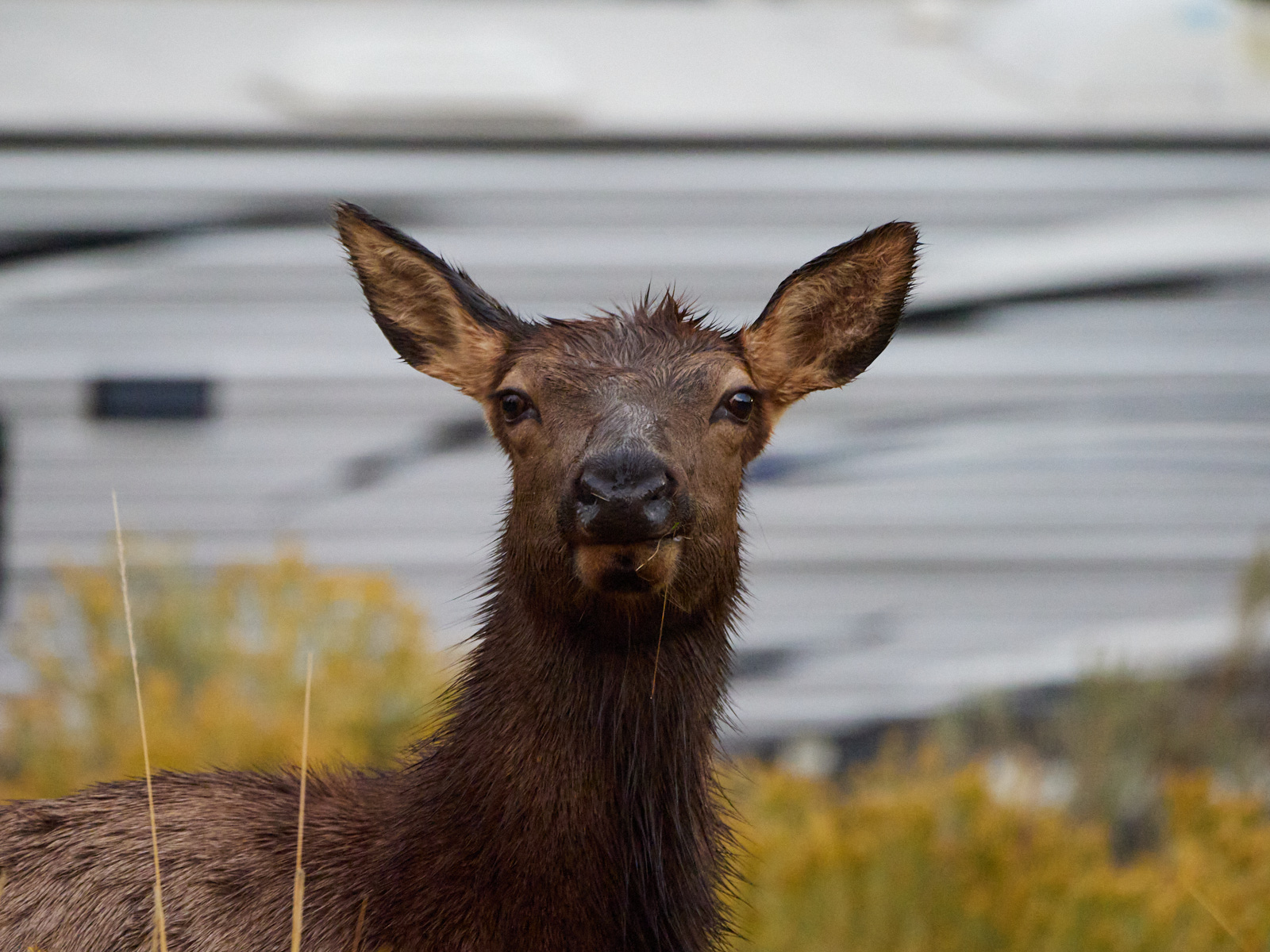 Headshot from the same perspective. What a face!
×
× 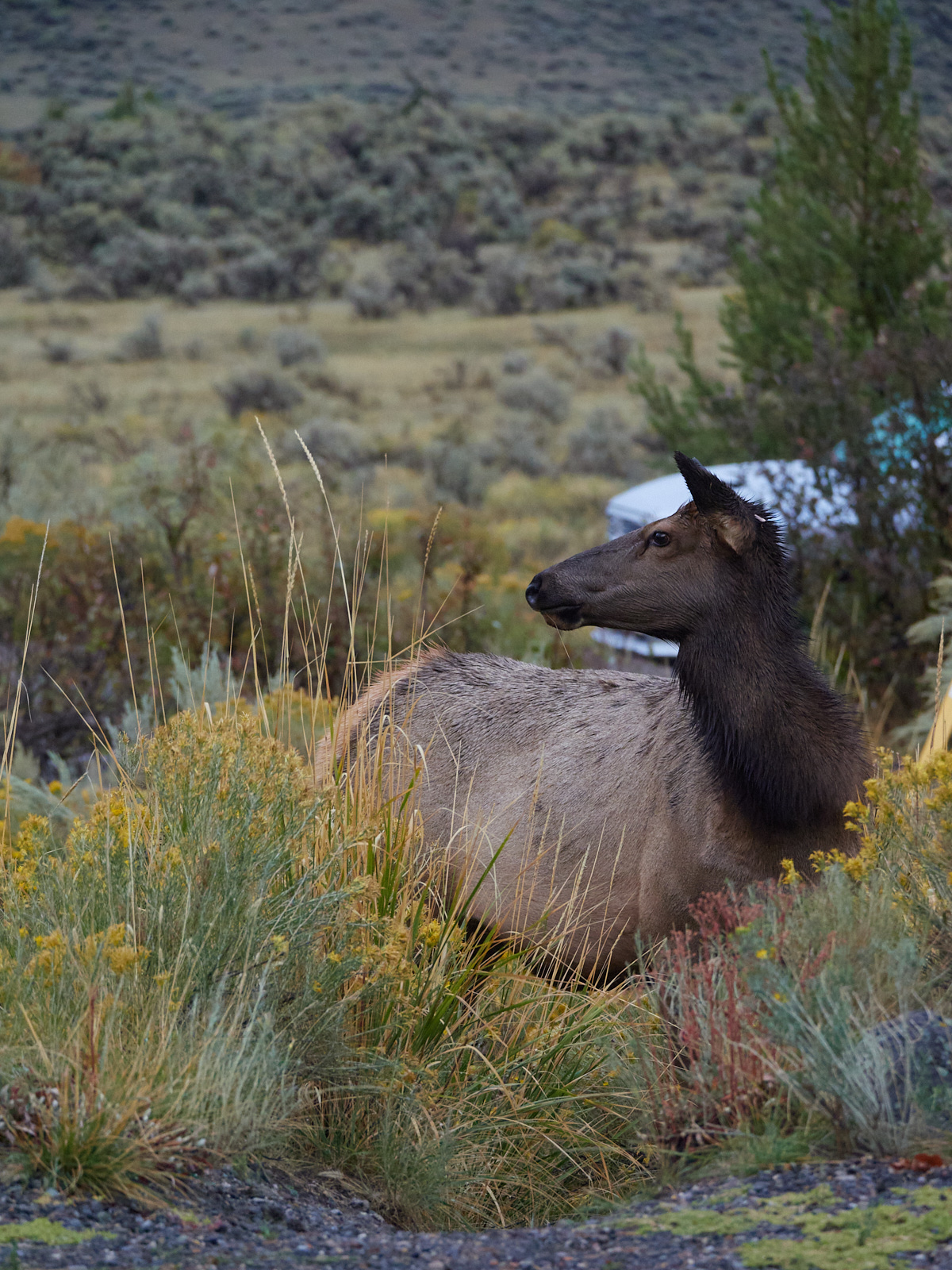 This elk is multitasking: chewin' on straw AND lookin' around.
×

Eventually, the lady elk moved far enough away, and I deposited my tent at its new position.

I left the campsite and drove southwards. Next stop: some of the park's most famous geysers, including one known to be elderly and devoted... 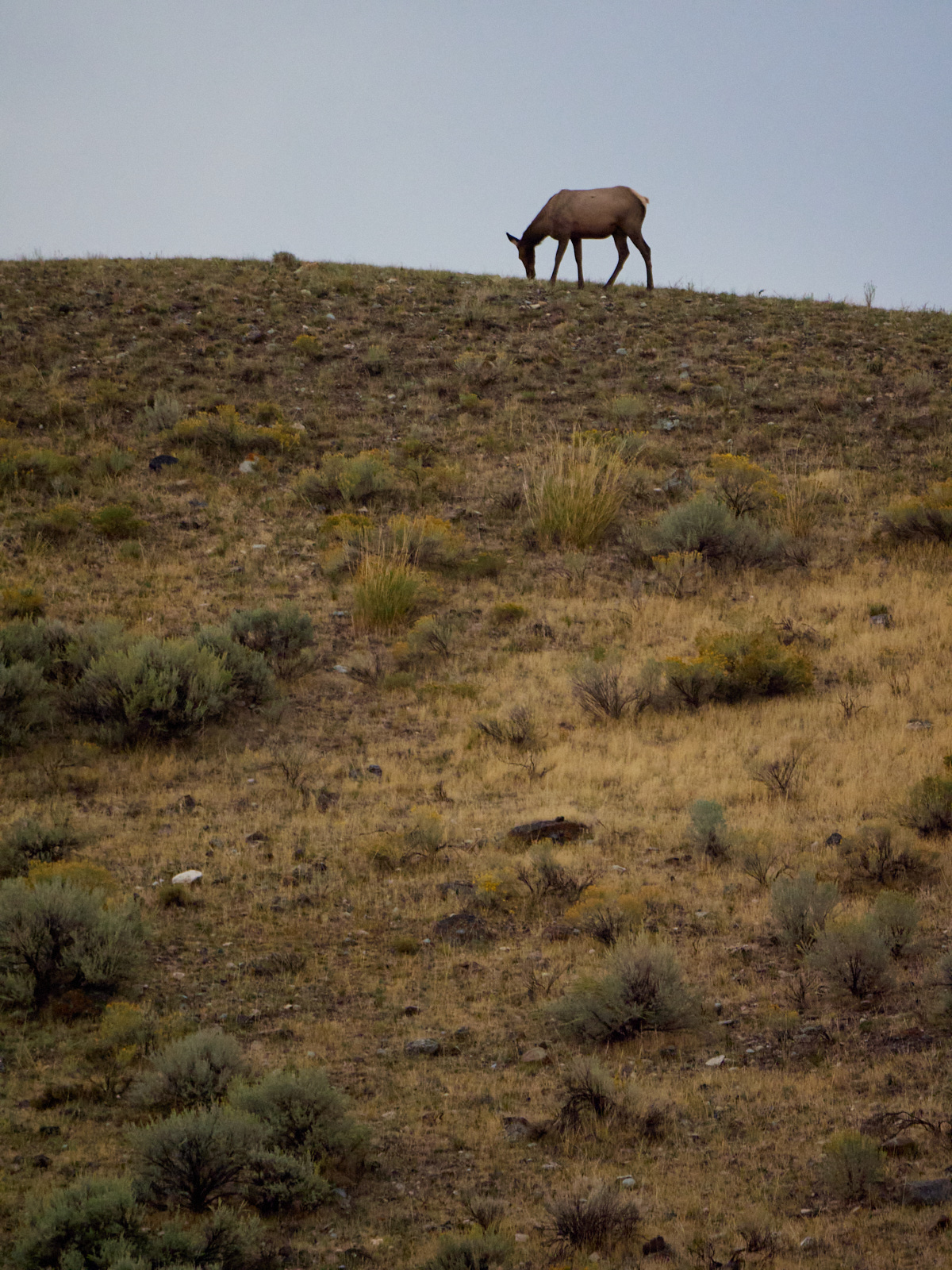 As I returned to the campground for my second night's stay, the elk were still hanging around the town of Mammoth. Alas, no rangers around to herd people away.

Signs advising people to keep far back from the elk remained. 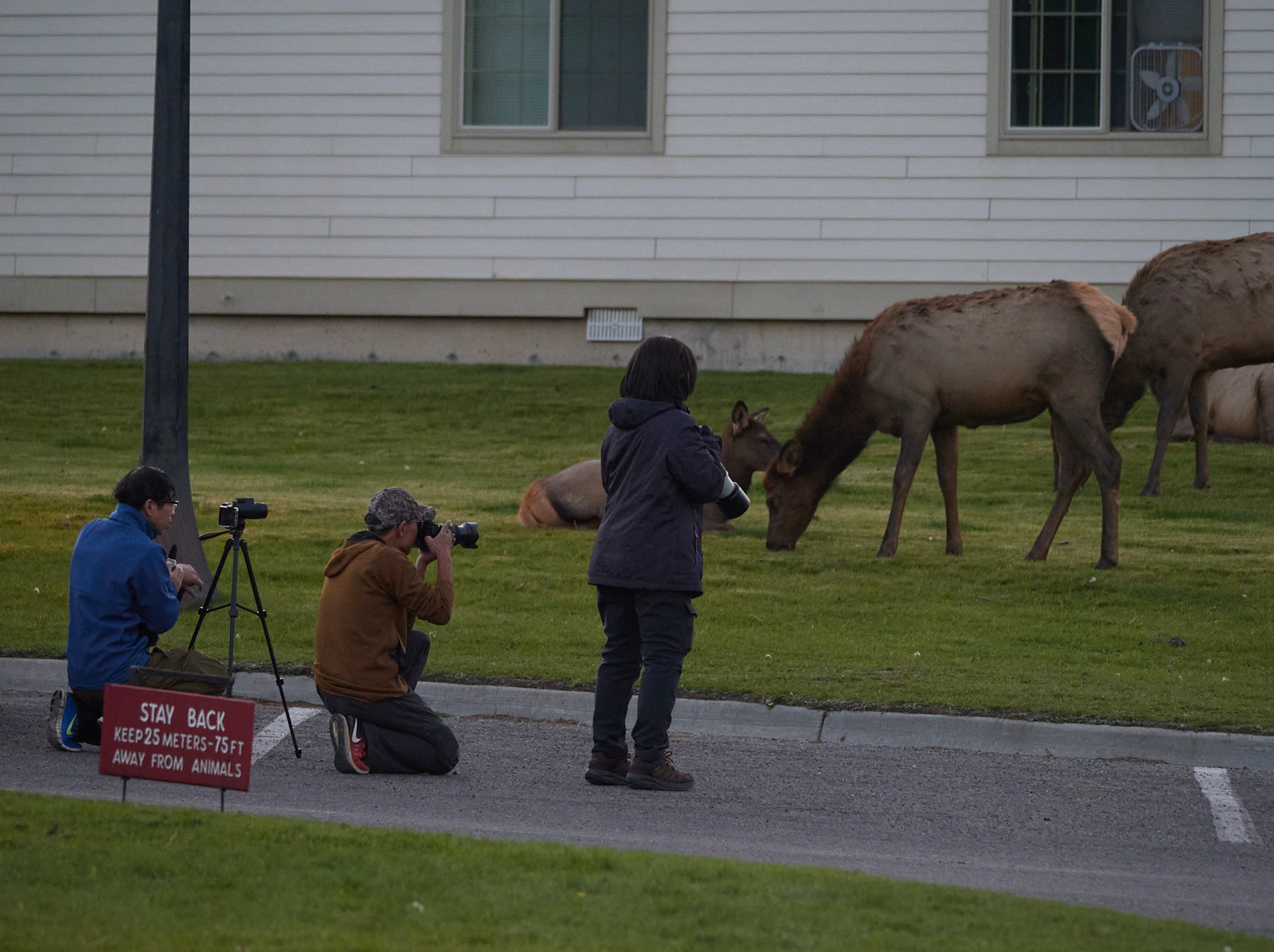 Fat lot of good those did, though.