I awoke on the twentieth of September, itching to see some more geysers and such. After waiting for an elk to move so I could relocate my tent, I jumped in my car and headed towards Old Faithful.

It was a cold Monday morning, and as I drove the snowy roads up into the park, I hoped that my destination, quite possibly the park's most famous attraction, wouldn't be too crowded when I got there. 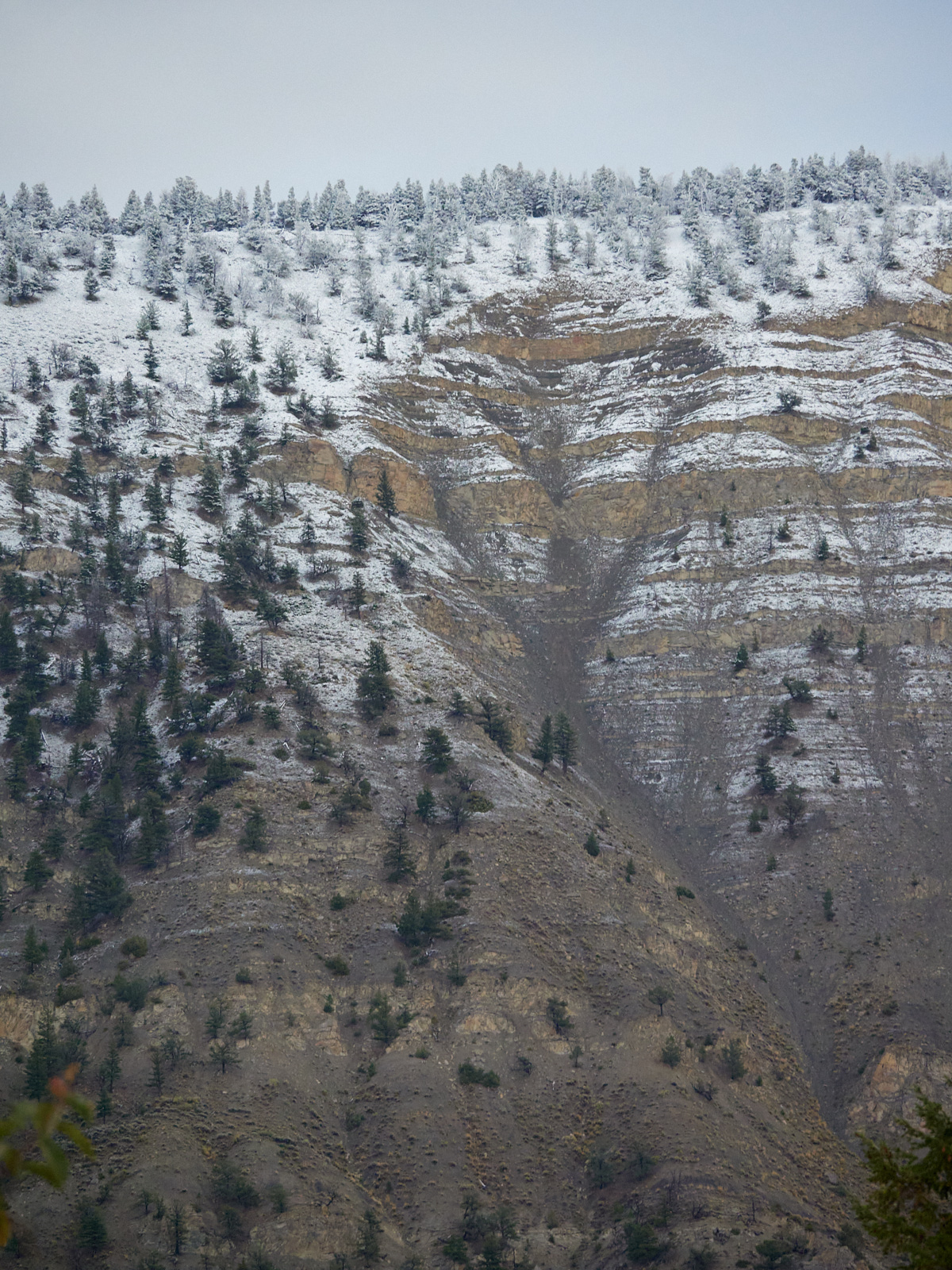 What could be more charming than the park's star attraction, Old Faithful?

Known for sending explosions of steamy hot water into the air at a regular schedule, this wonder of wonders is part of its own, larger geyser basin. Nearby parking areas, boardwalks, and gift shops are vast and well-sized to fit the load of tourists. 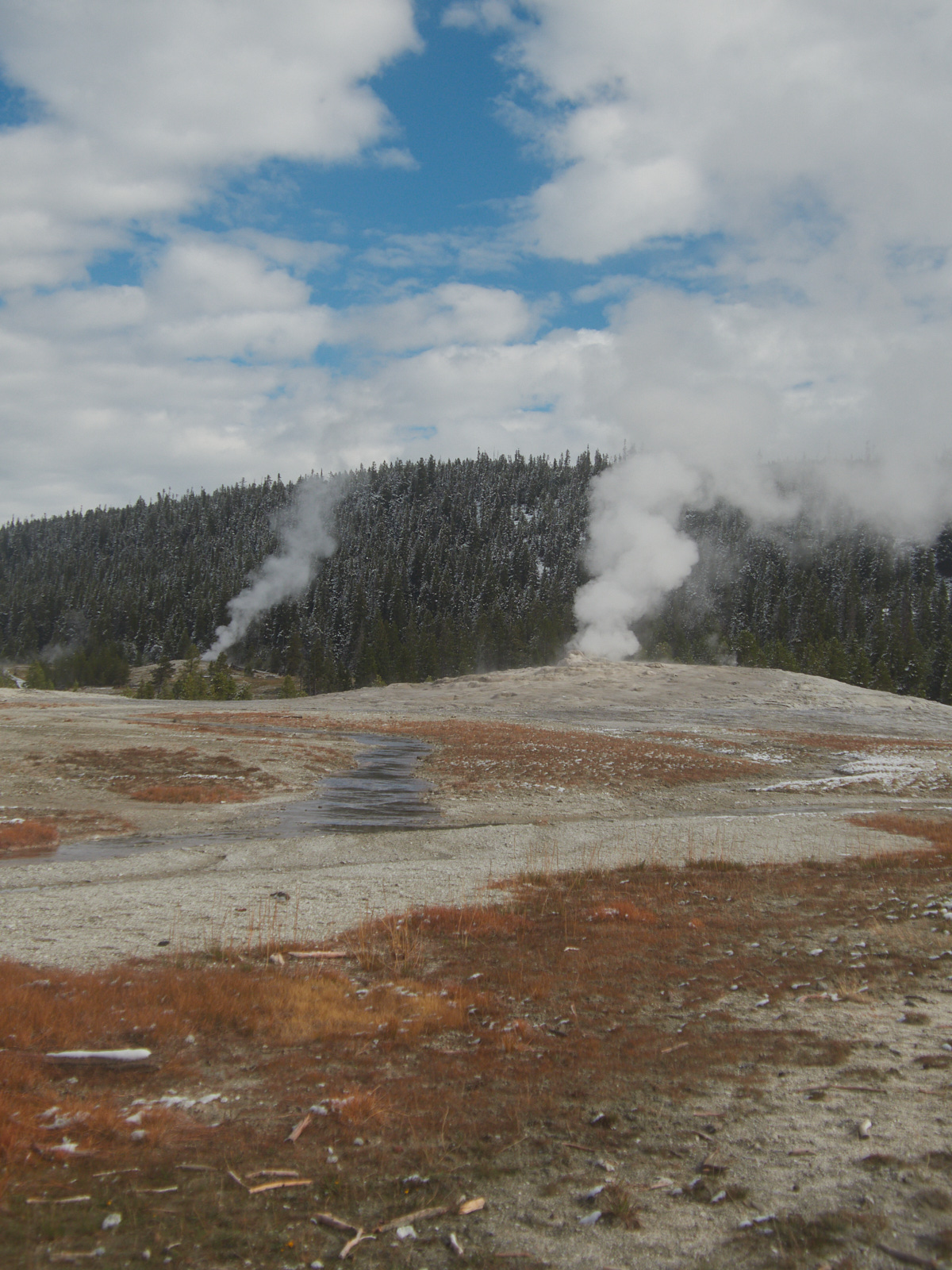 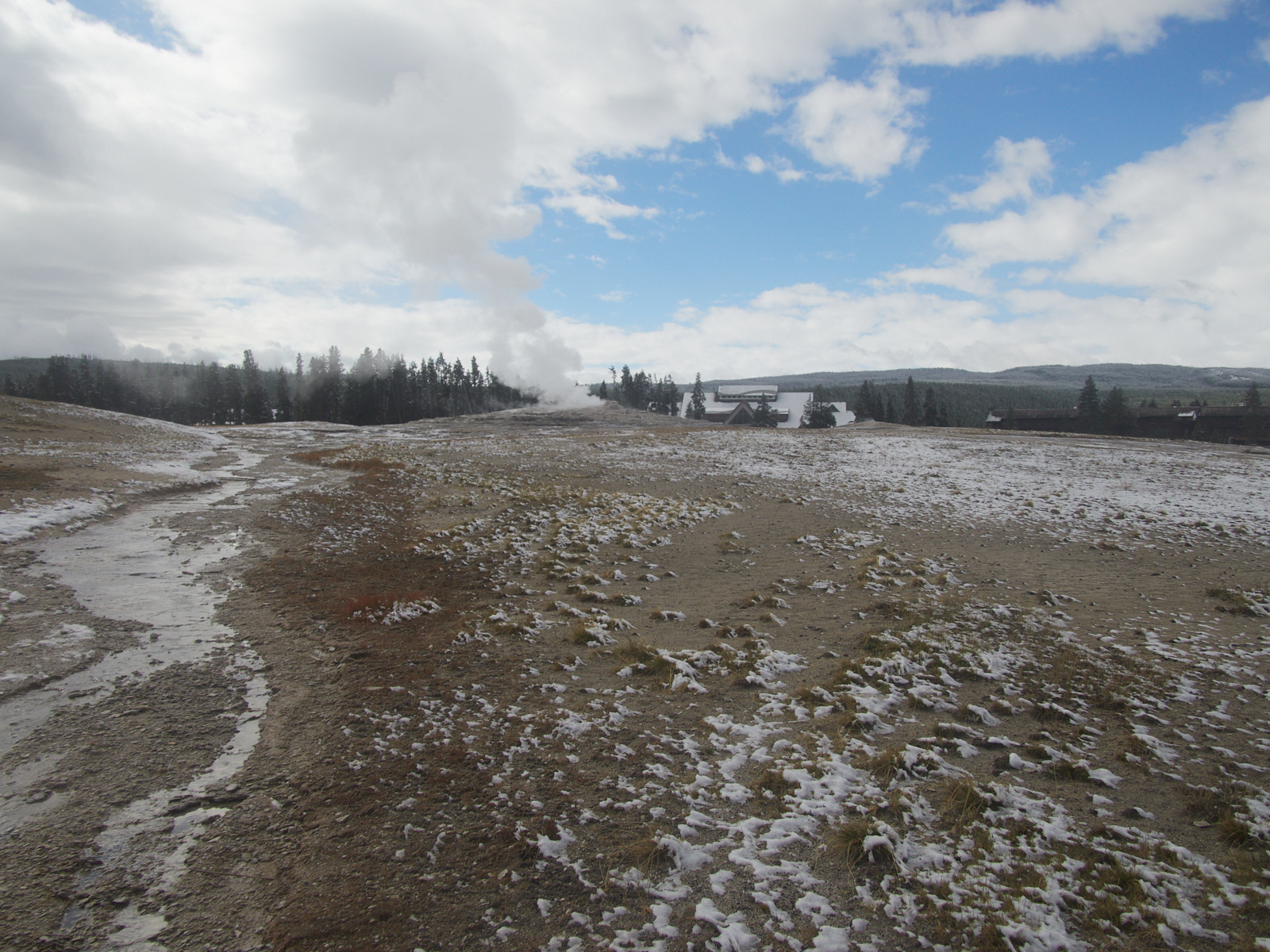 Yes, the geysers here are vast and famous for a reason, but the area lacks some of the intense color seen elsewhere in the park. In the meantime, my eyes were drawn to a buffalo in the distance.

In the meantime, as I meandered my way around the boardwalks, I had a brief conversation with a fellow park visitor who highly recommended the trail to Fairy Falls and the geysers beyond.

Given that the day was young, and warmer than yesterday, and that it was relatively close to Old Faithful (a.k.a. where I already was,) I elected to make it my next stop. 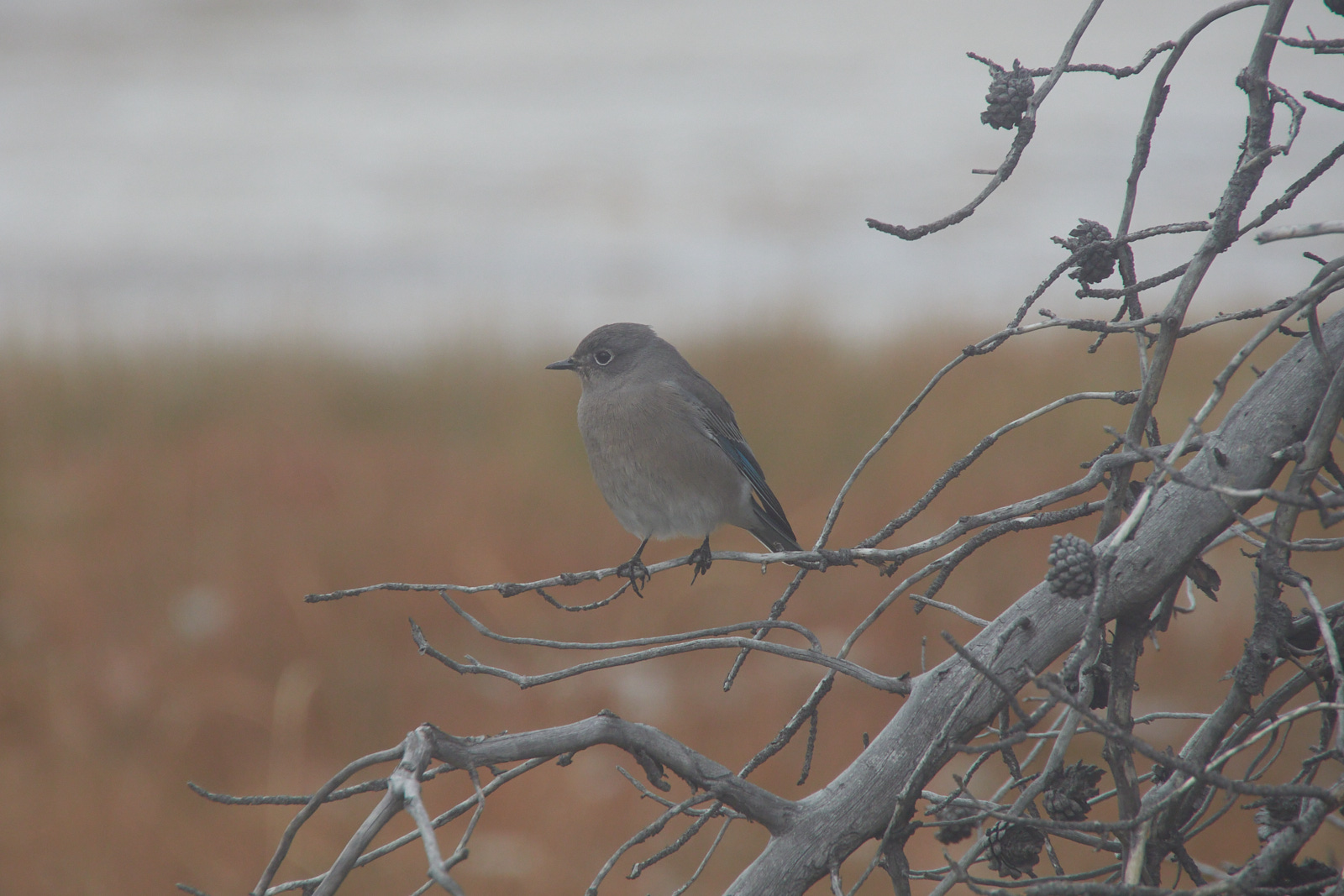 What? Did you think I visited Old Faithful and missed an opportunity to photograph a random bird!? And by, random bird, I mean a female Rocky Mountain Bluebird.
×

The parking lot for the Fairy Falls trail head was pretty packed. This isn't because everyone wants to visit the falls, but is instead due to the fact that it's situated near the Midway Geyser Basin, home to the famous Grand Prismatic Spring.

The earliest section of the trail is a boardwalk, shared with a path to the Grand Prismatic Spring overlook.

So, what of Grand Prismatic Spring and its colorful comrades?

With some reflection, I think it was the part of Yellowstone that stuck in my mind the most from childhood. Something about its vivid colors was just so compelling.

Alas, they looked much less vivid on this wintry Monday, obscured by steam hitting cold air, but still the landscape was stark and stunning. 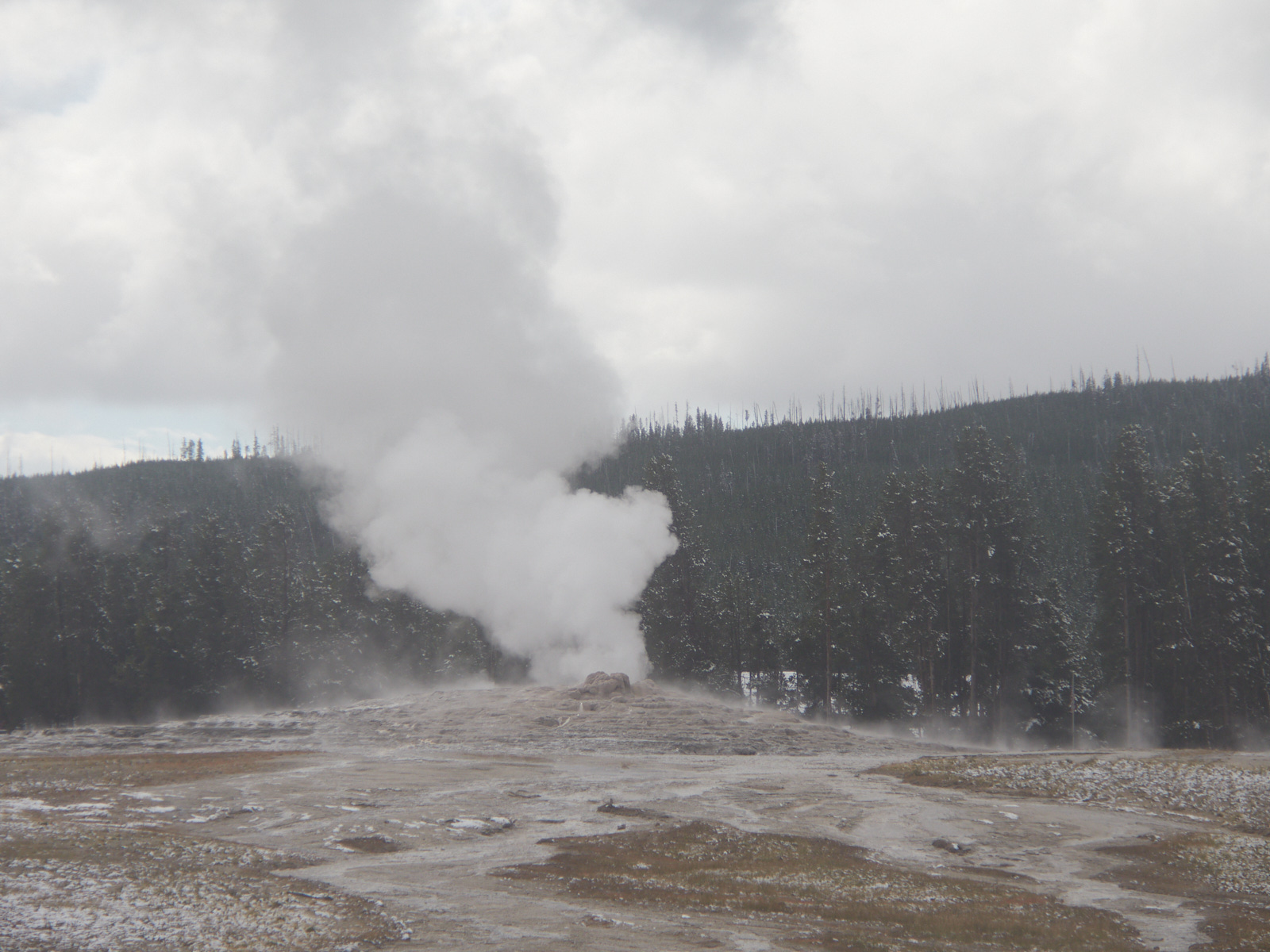 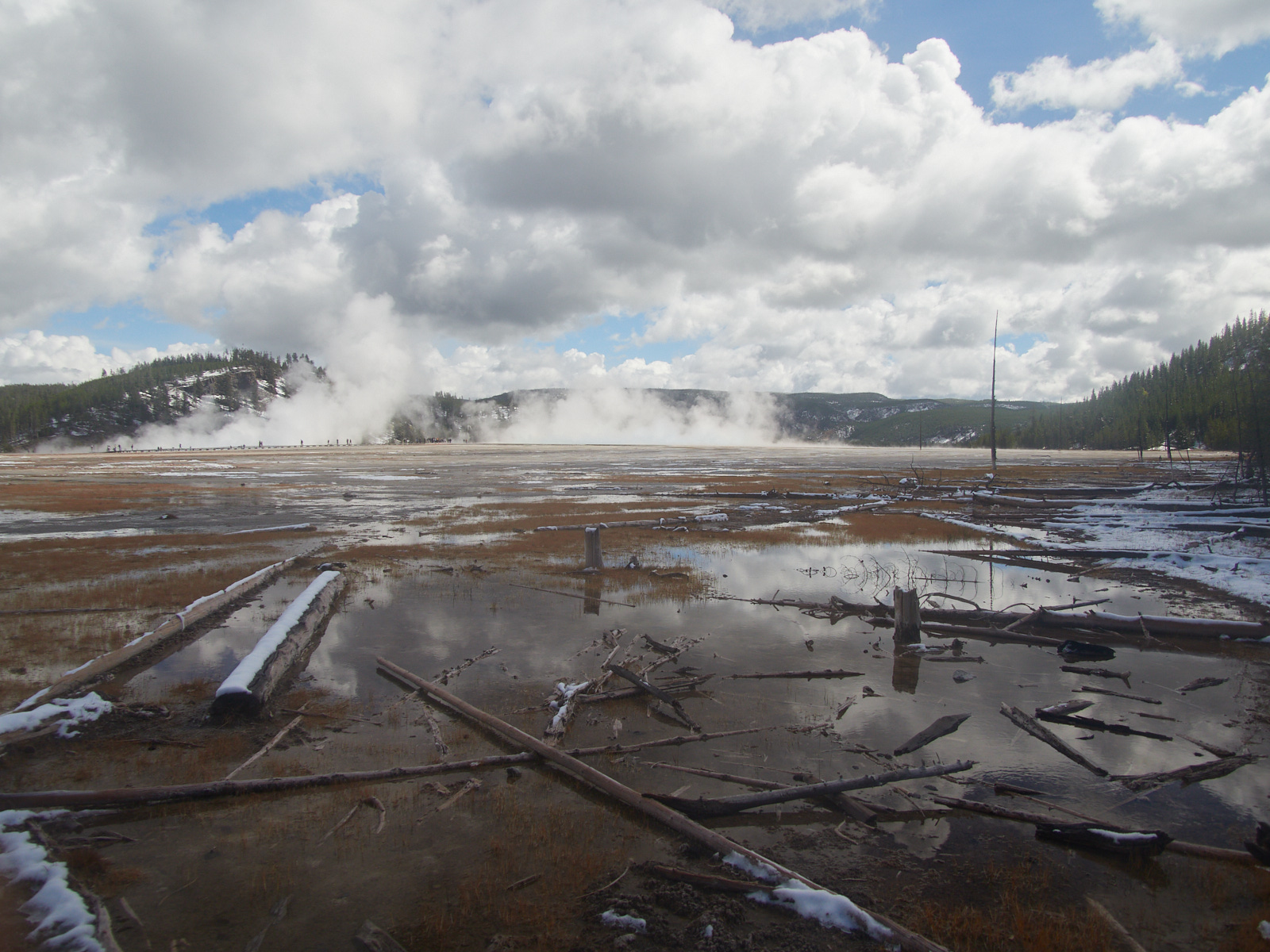 Eventually, the pathway becomes a wooded one. Squelchy, and occasionally rather washed out, but easily passable by the people who decide to follow the path to the waterfall..

Water levels are generally at a "low" towards Autumn, so it's unsurprising that this waterfall was more of a trickle than a roar. But still, with the pop of some yellow leaves, and the right angle, it was quite a photogenic trickle indeed: 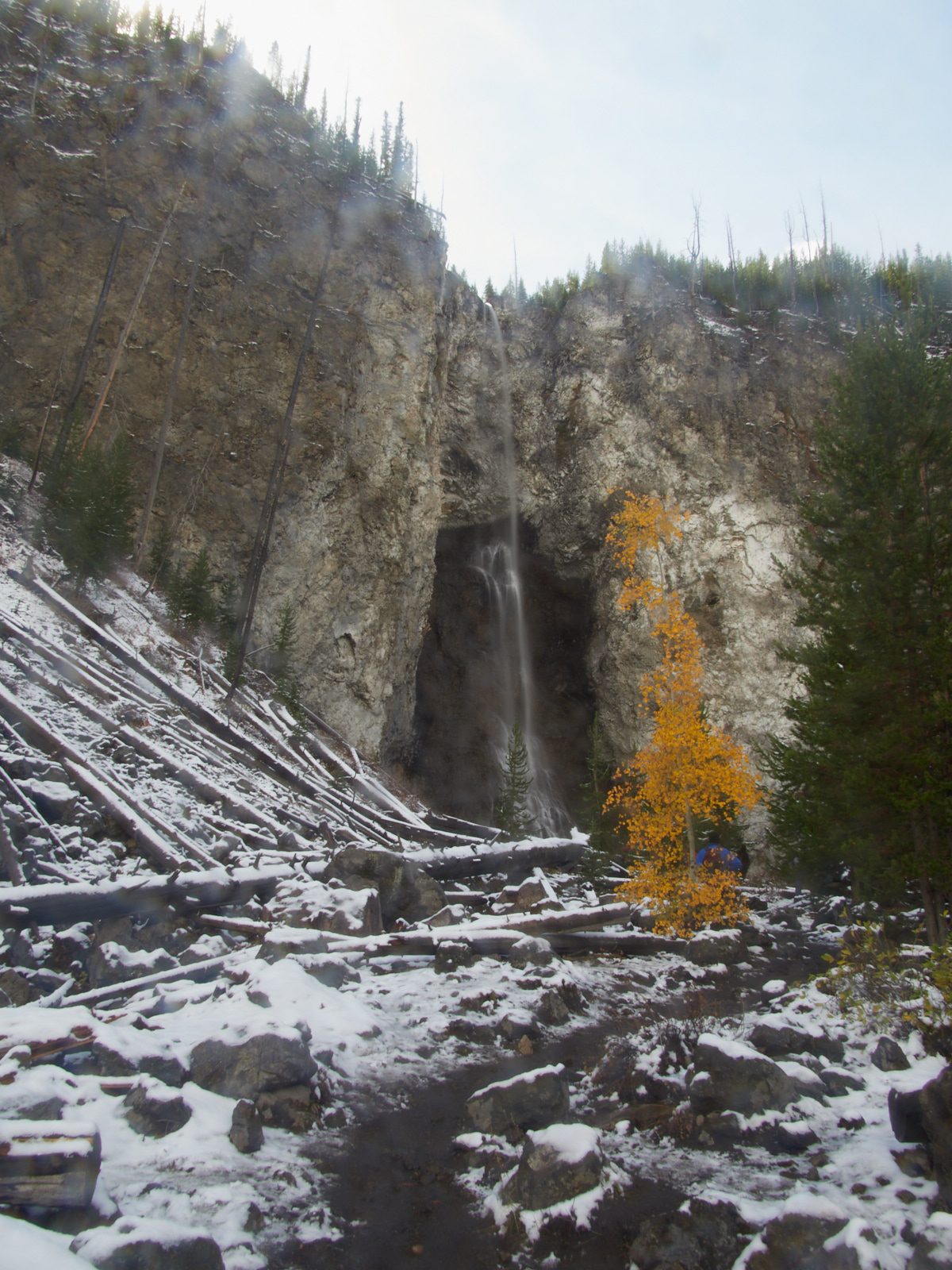 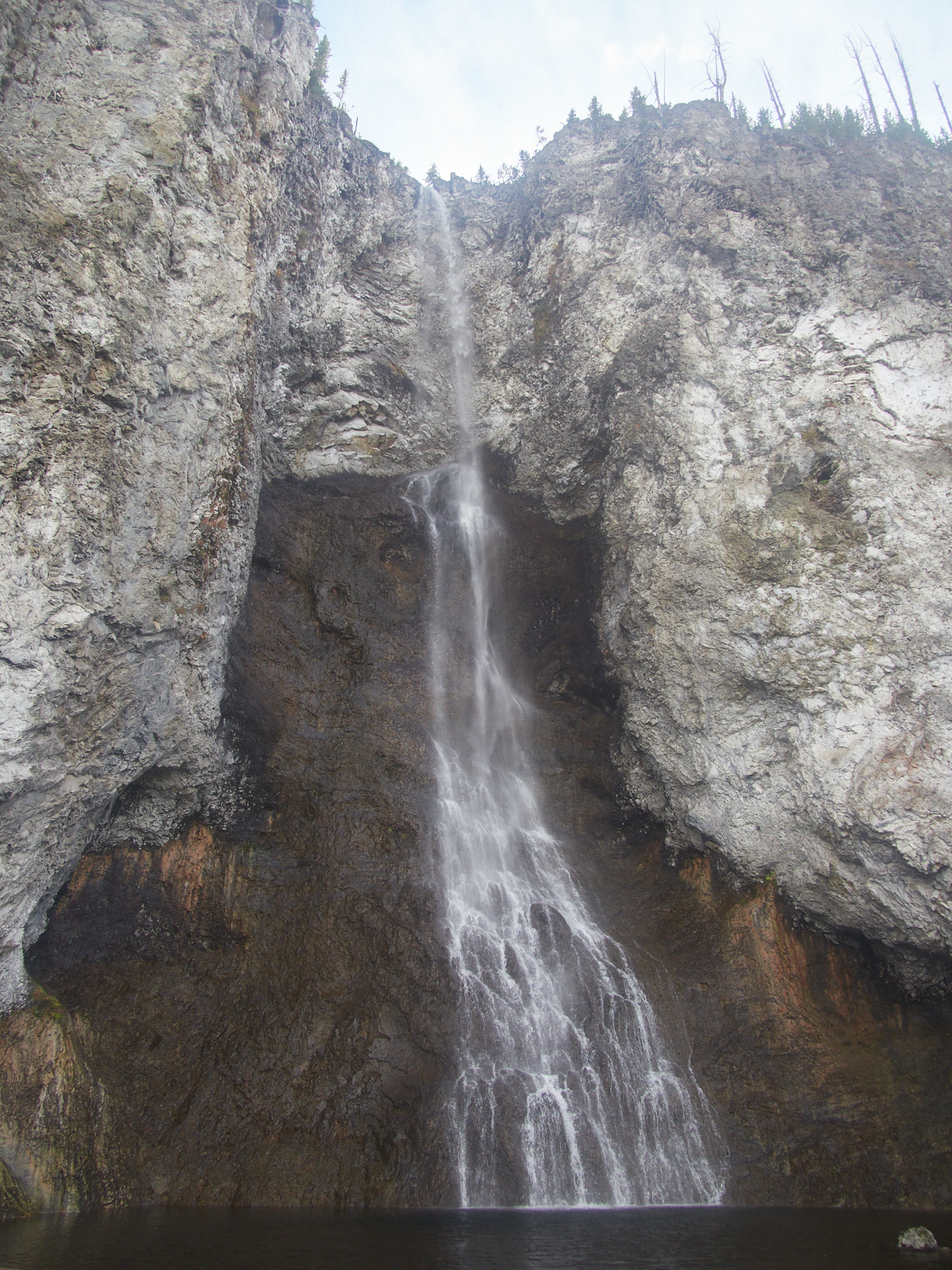 Of course, the falls are the main destination for most of the people who proceeded along the trail, so it's not entirely unexpected that their base was popular when I passed through. 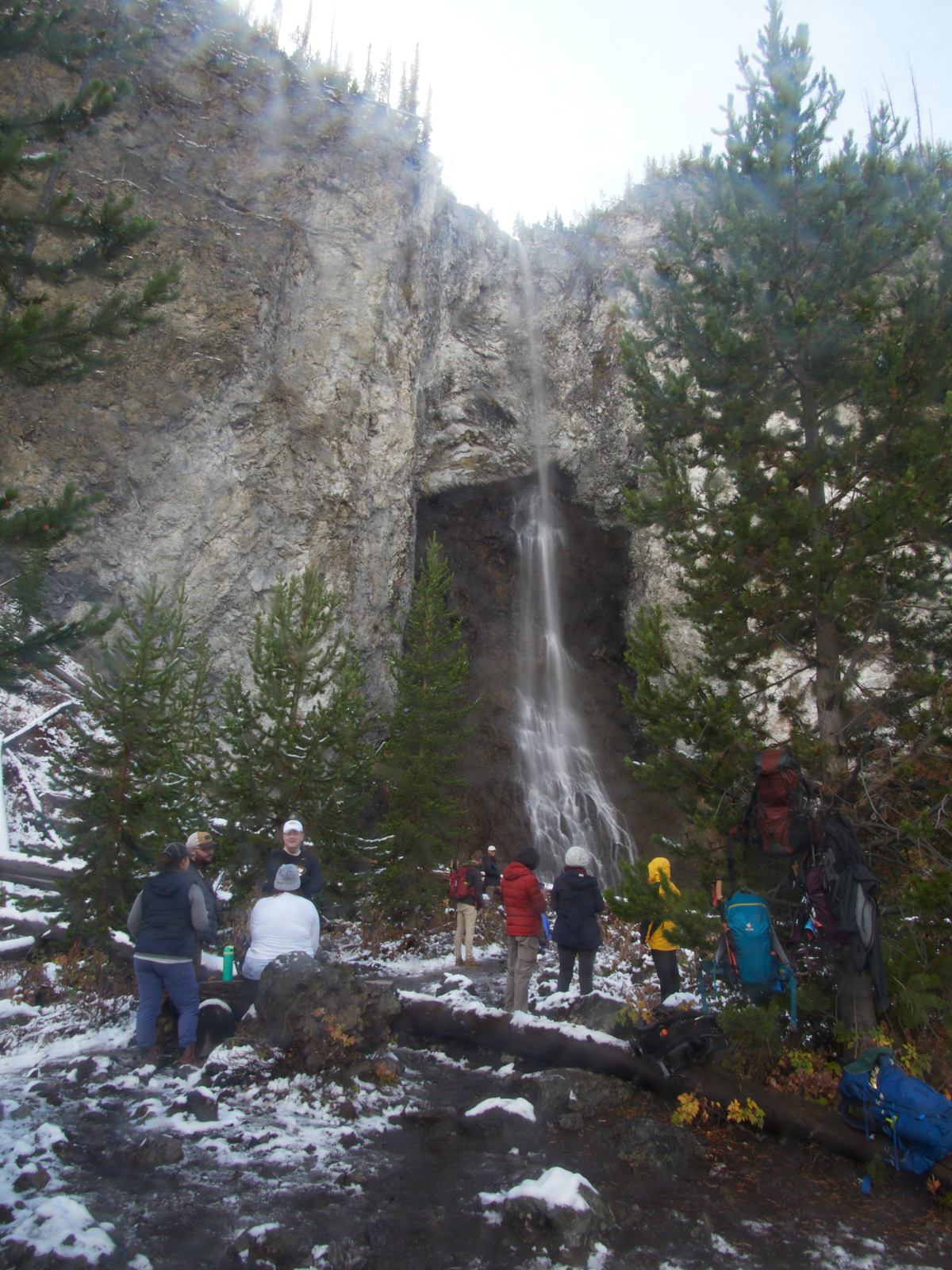 Continue beyond the falls, and you are well-rewarded.

After easily crossing fairy creek, the trail opened up, and it was far more secluded. 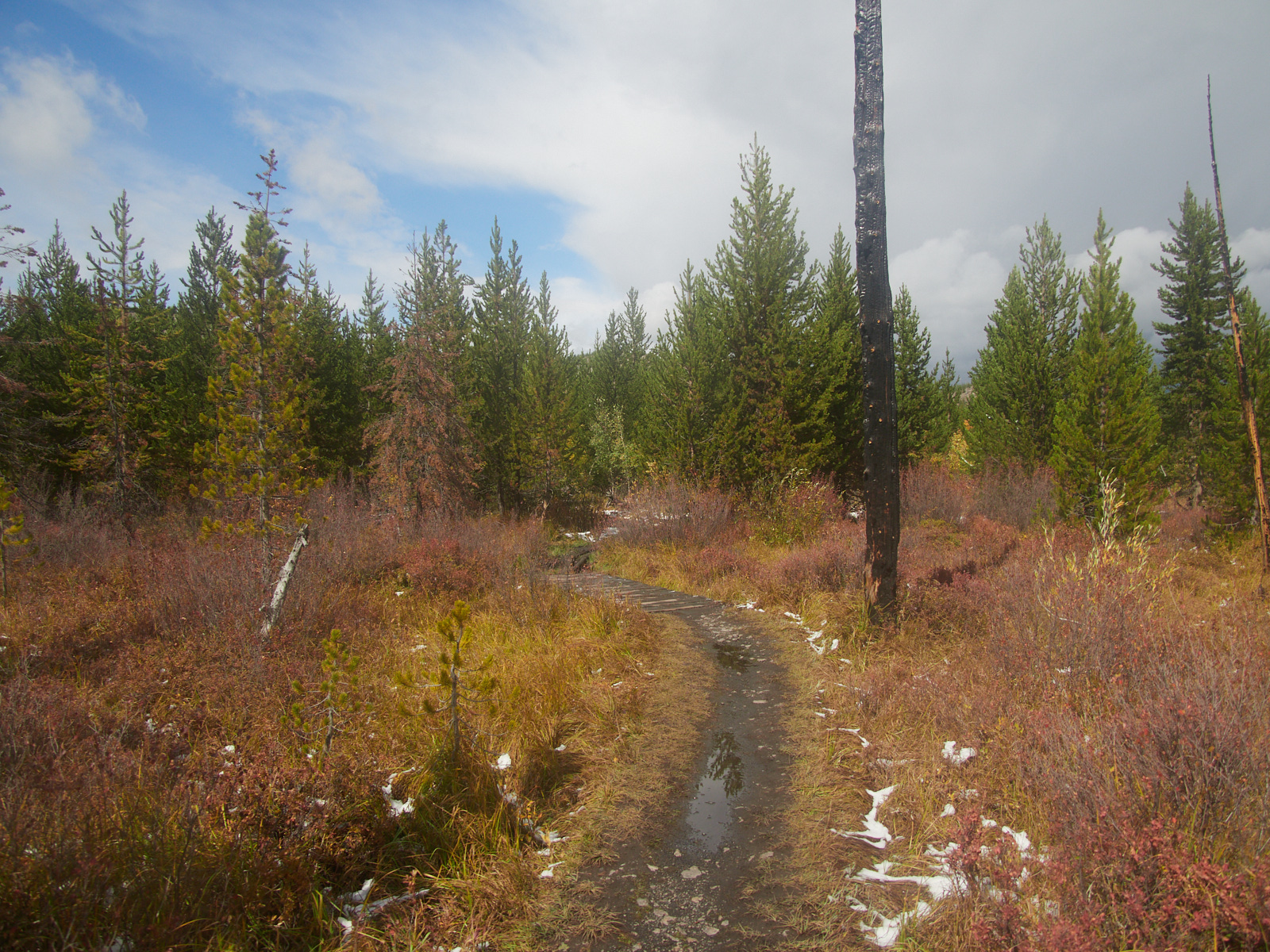 And, by the way, this is also where I took my all-time best chipmunk photographs! 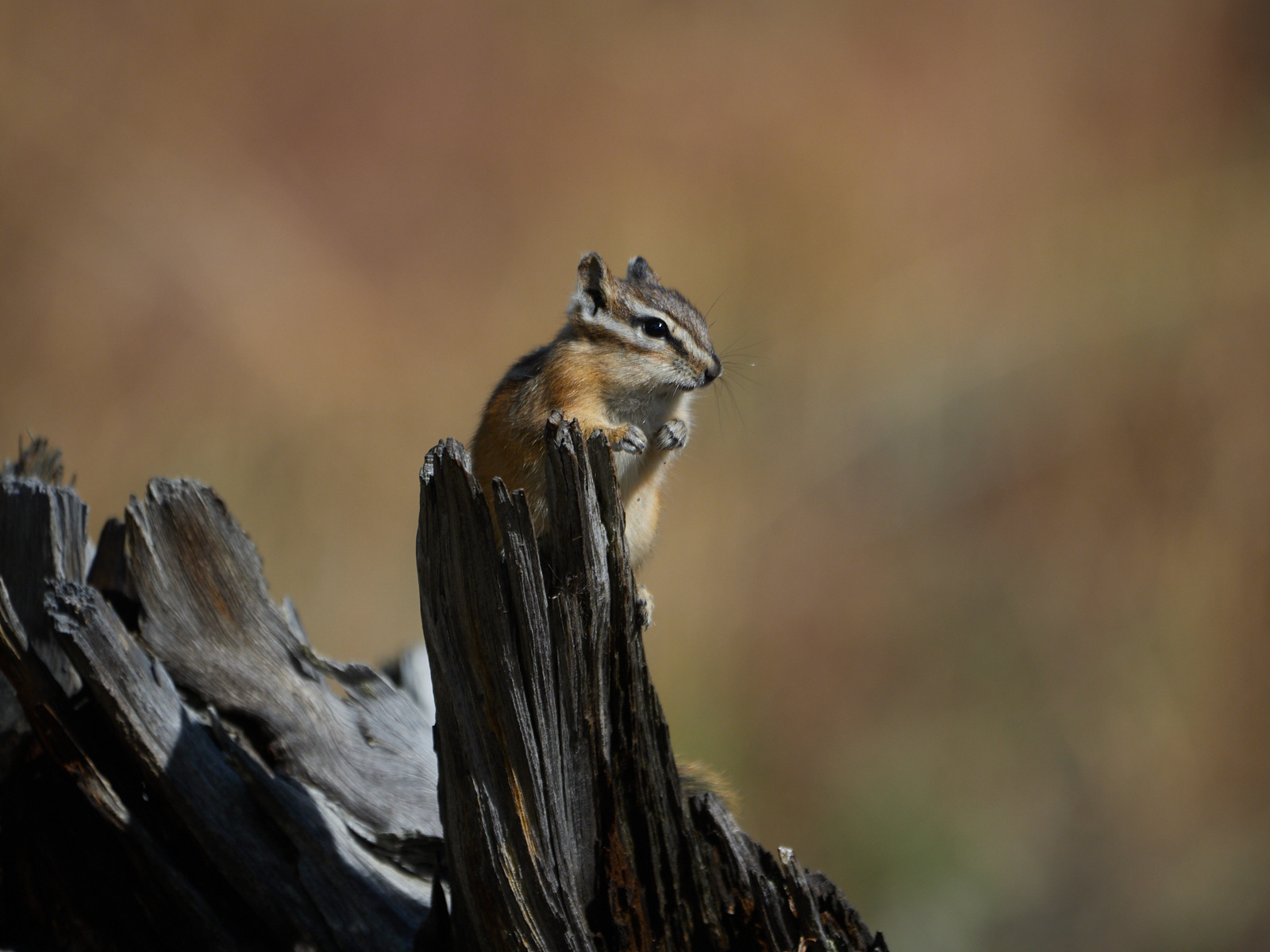 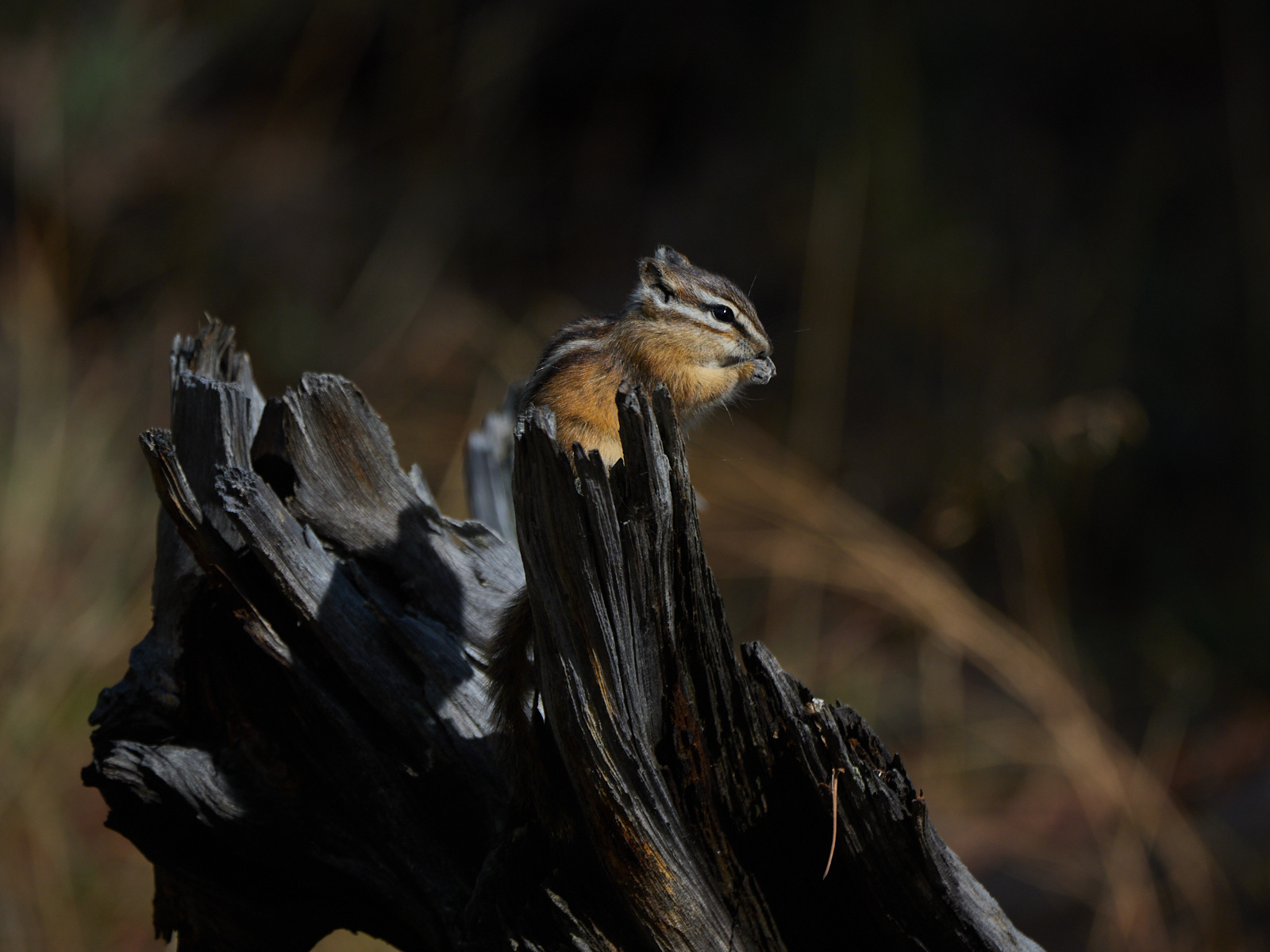 Continue along the trail... 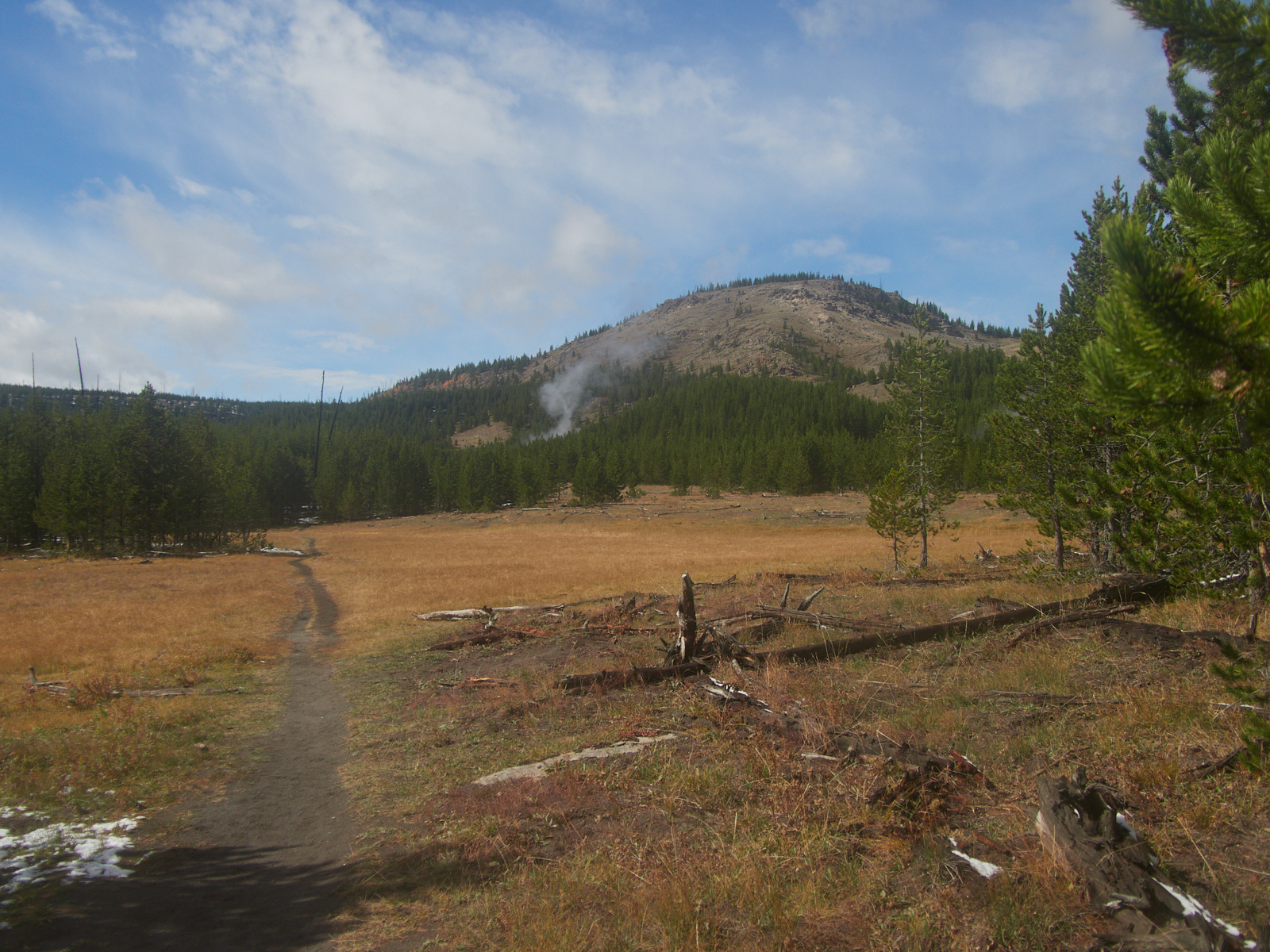 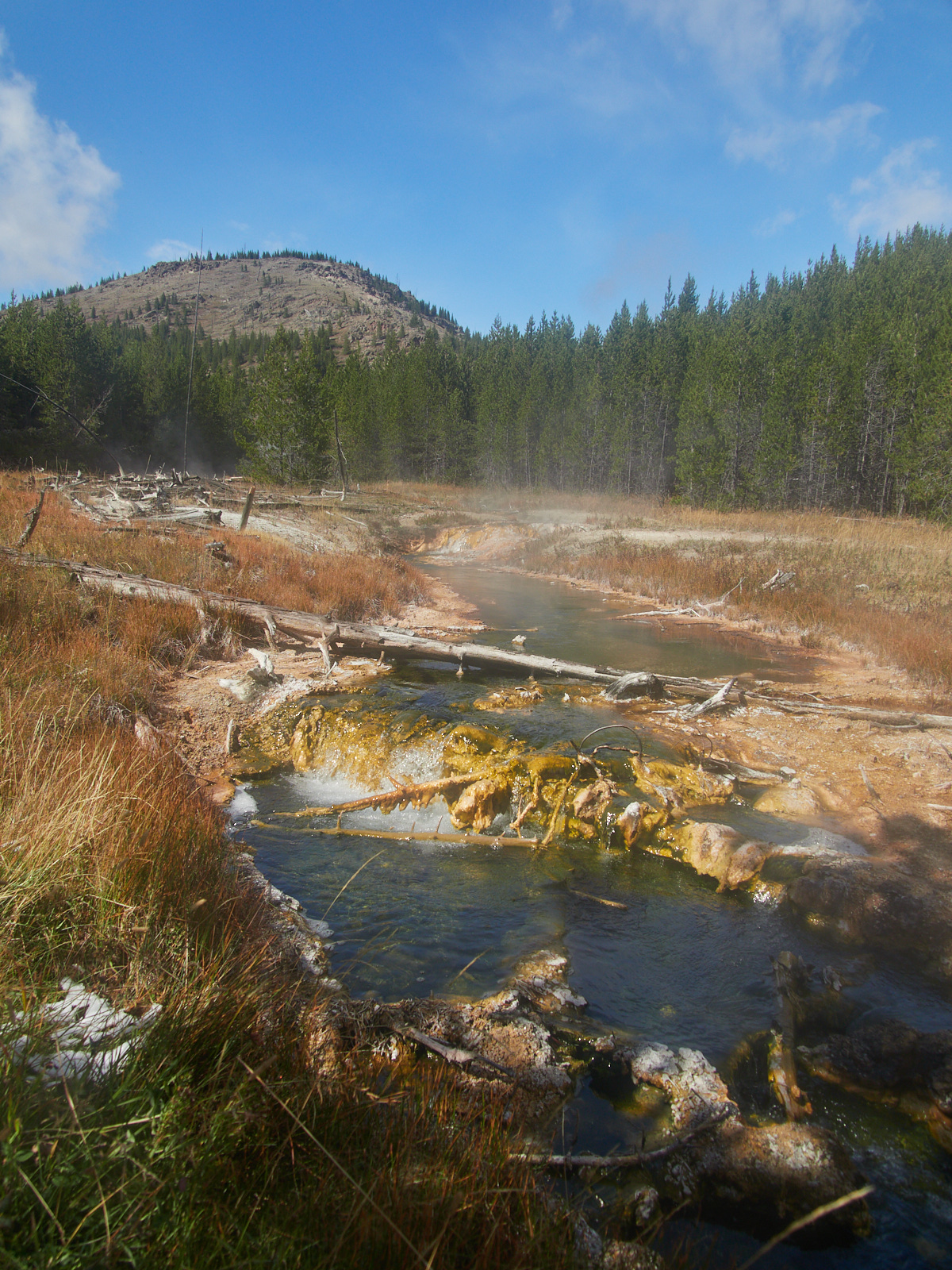 ...and you eventually reach Imperial Geyser.

Is it more impressive than geysers elsewhere in the park? No, but there are no boardwalks around this one, no baseball caps blown into pools of boiling water, and for a while, no souls near it but myself. 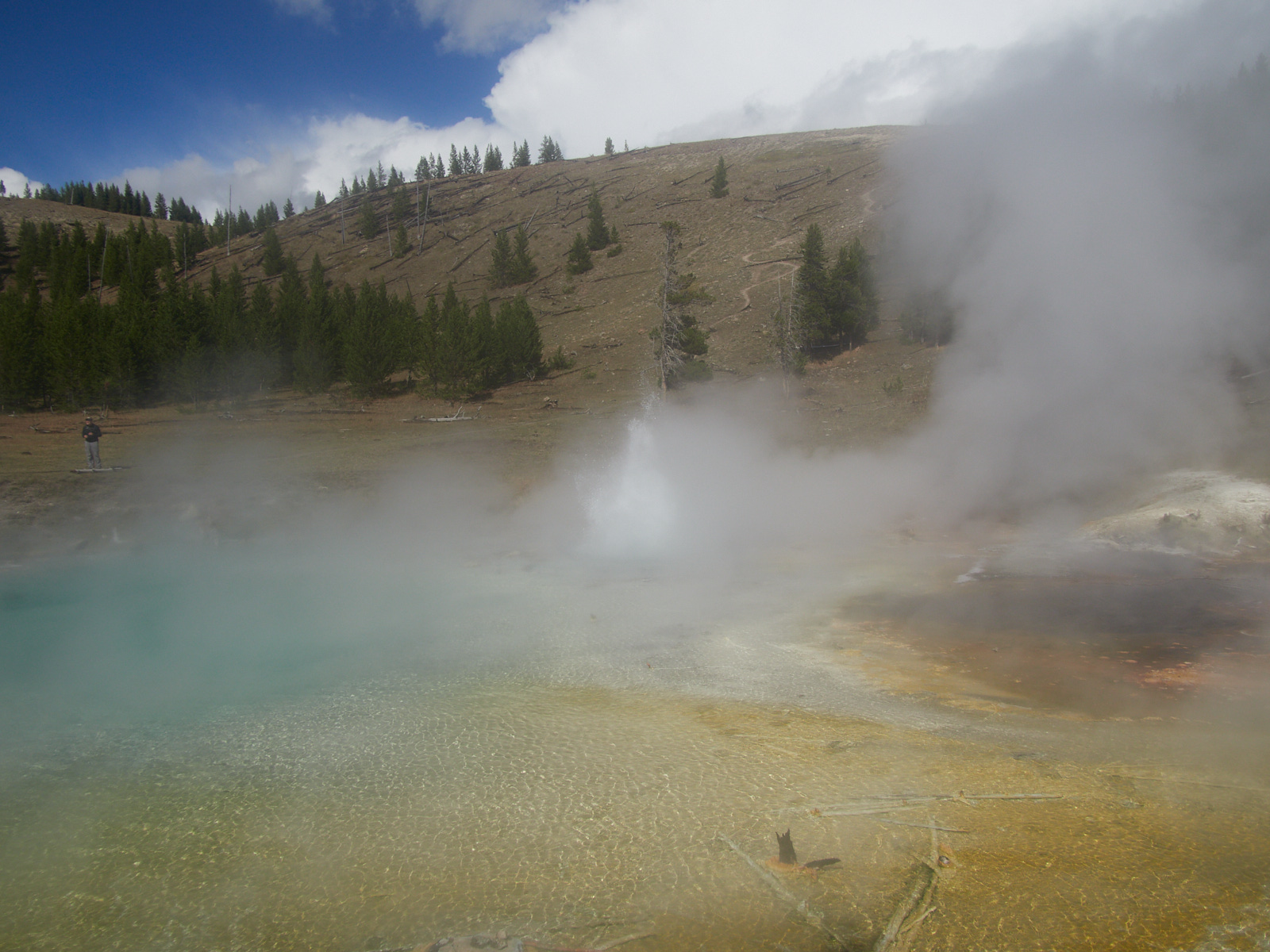 The trail appears to continue up the hill, and further sections could be explored
×

For a brief moment, I felt the sort of solitude and oneness with nature that people seek in these parks. Then, I headed back to the car.

Whatever I Did Next

Obviously, I had to check out the rest of the Midway Geyser Basin whilst I was in the area. 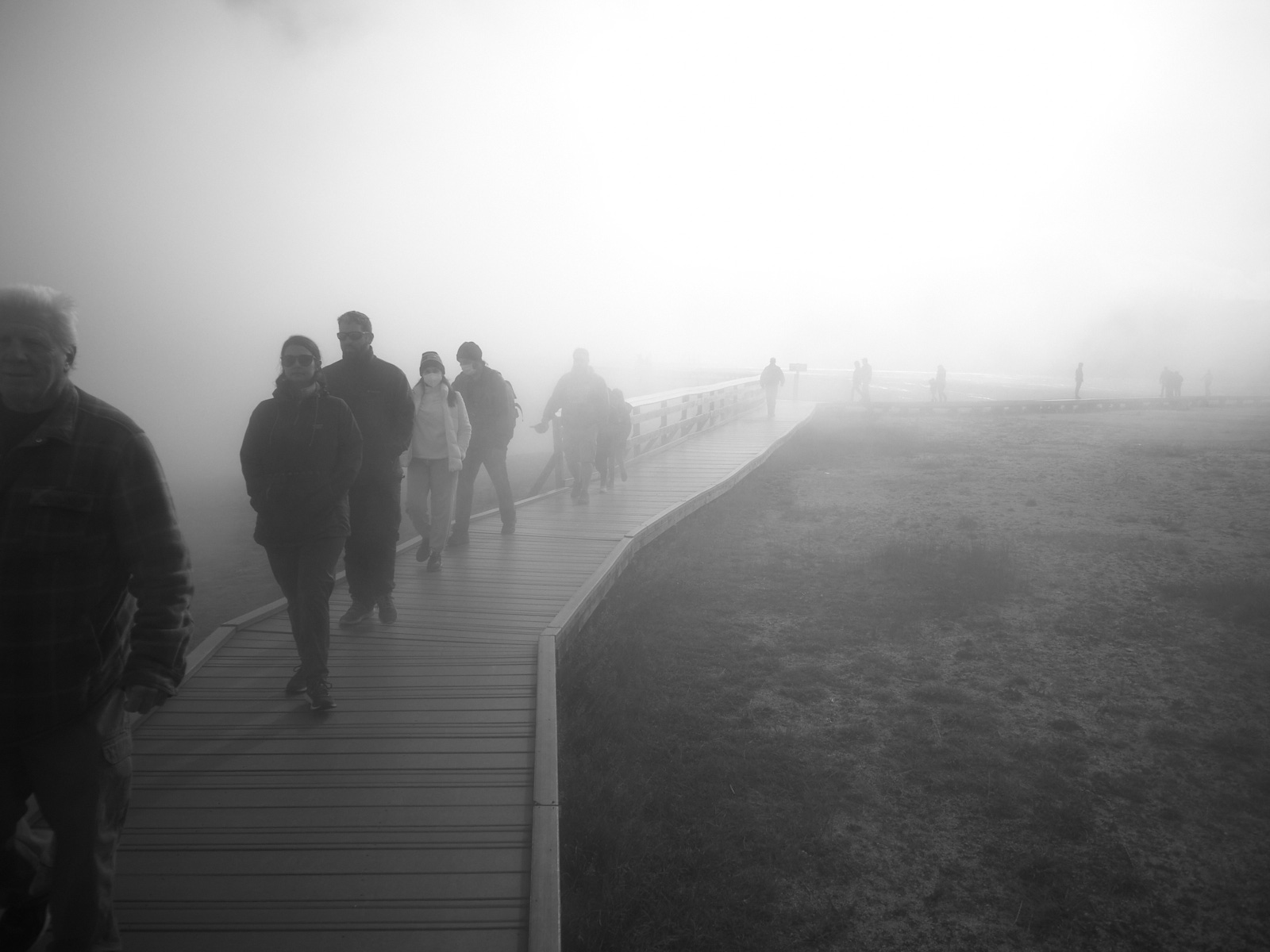 Minor artistic license taken, but I swear reality was close!
×
× 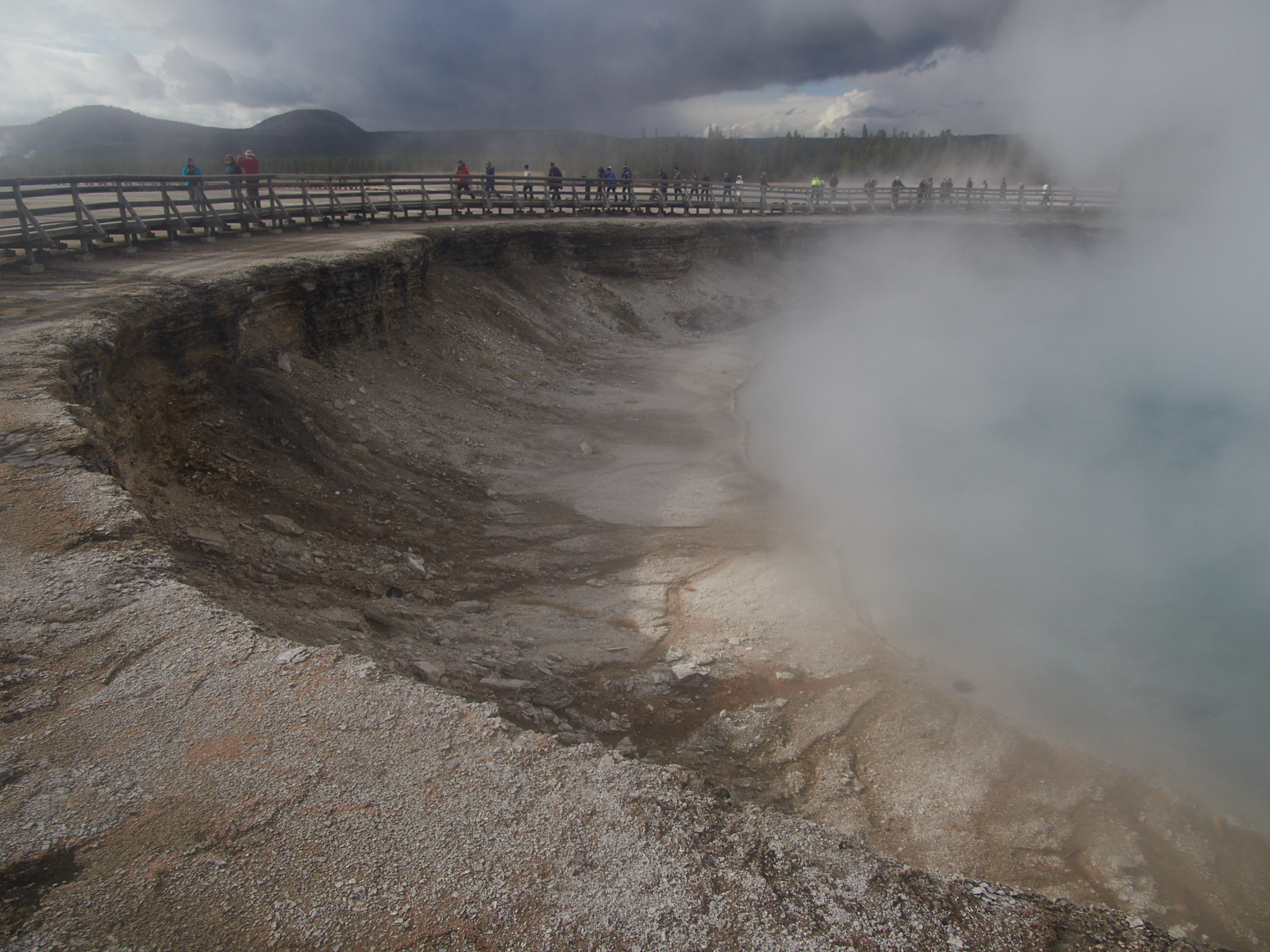 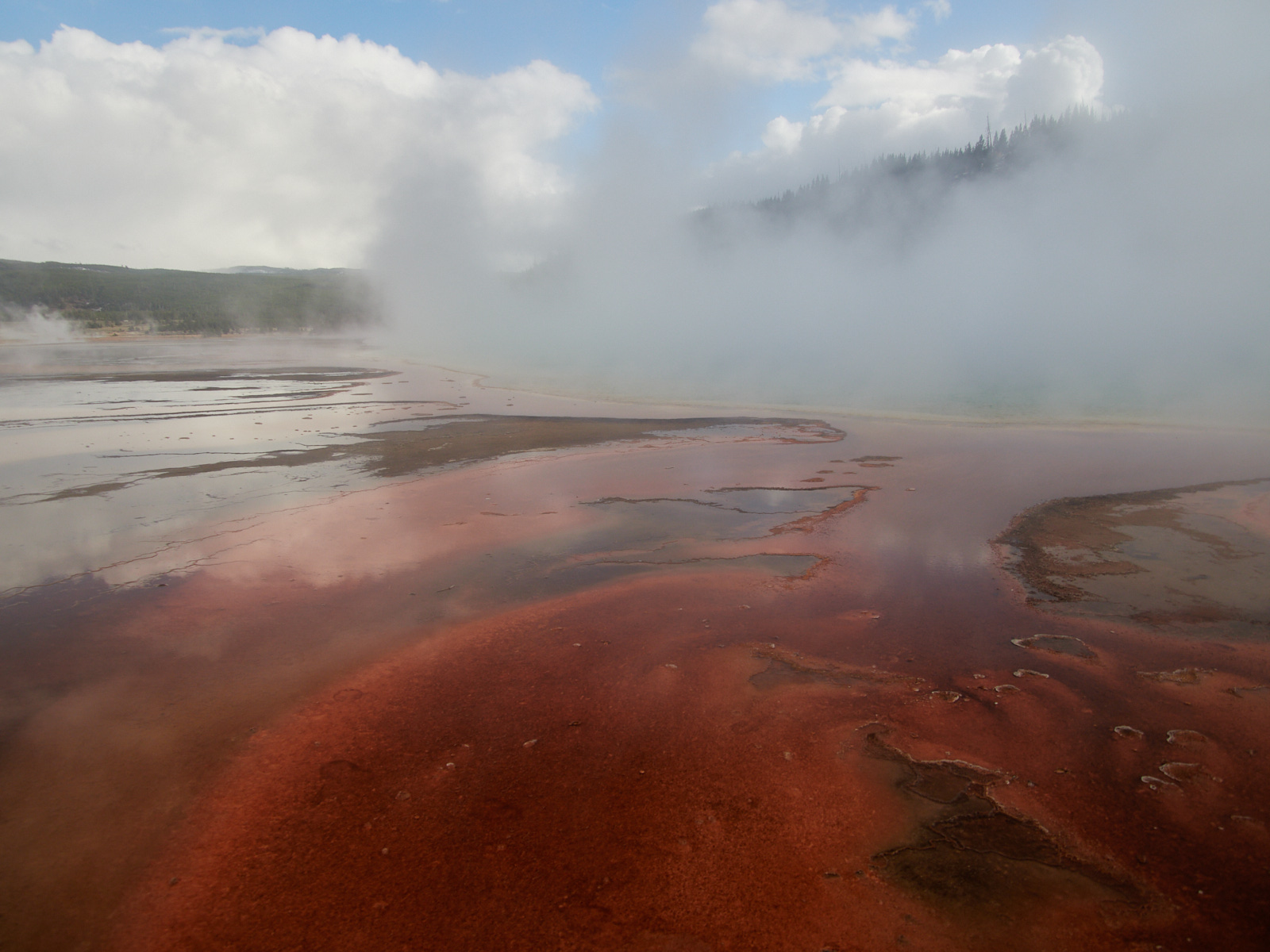 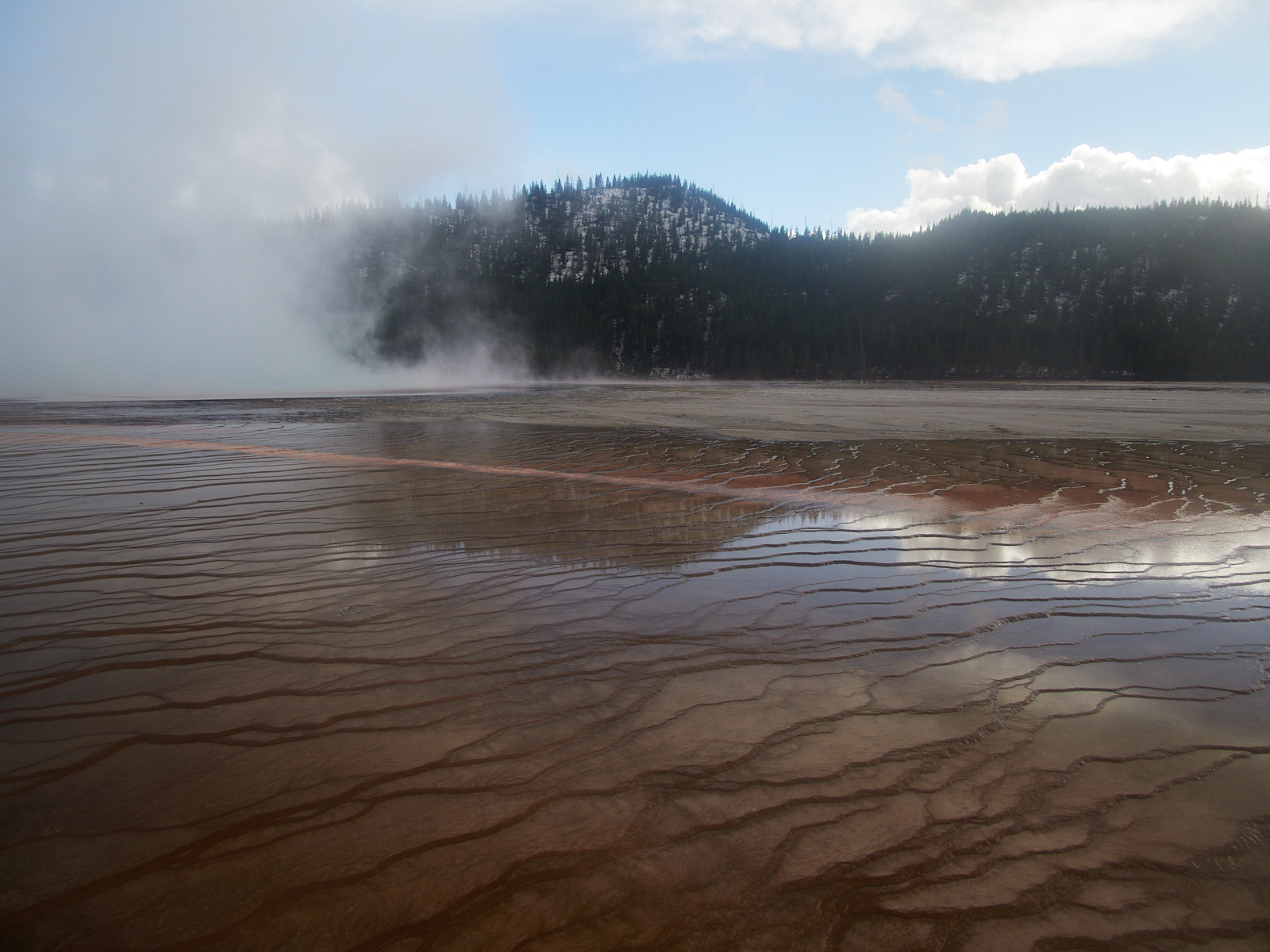 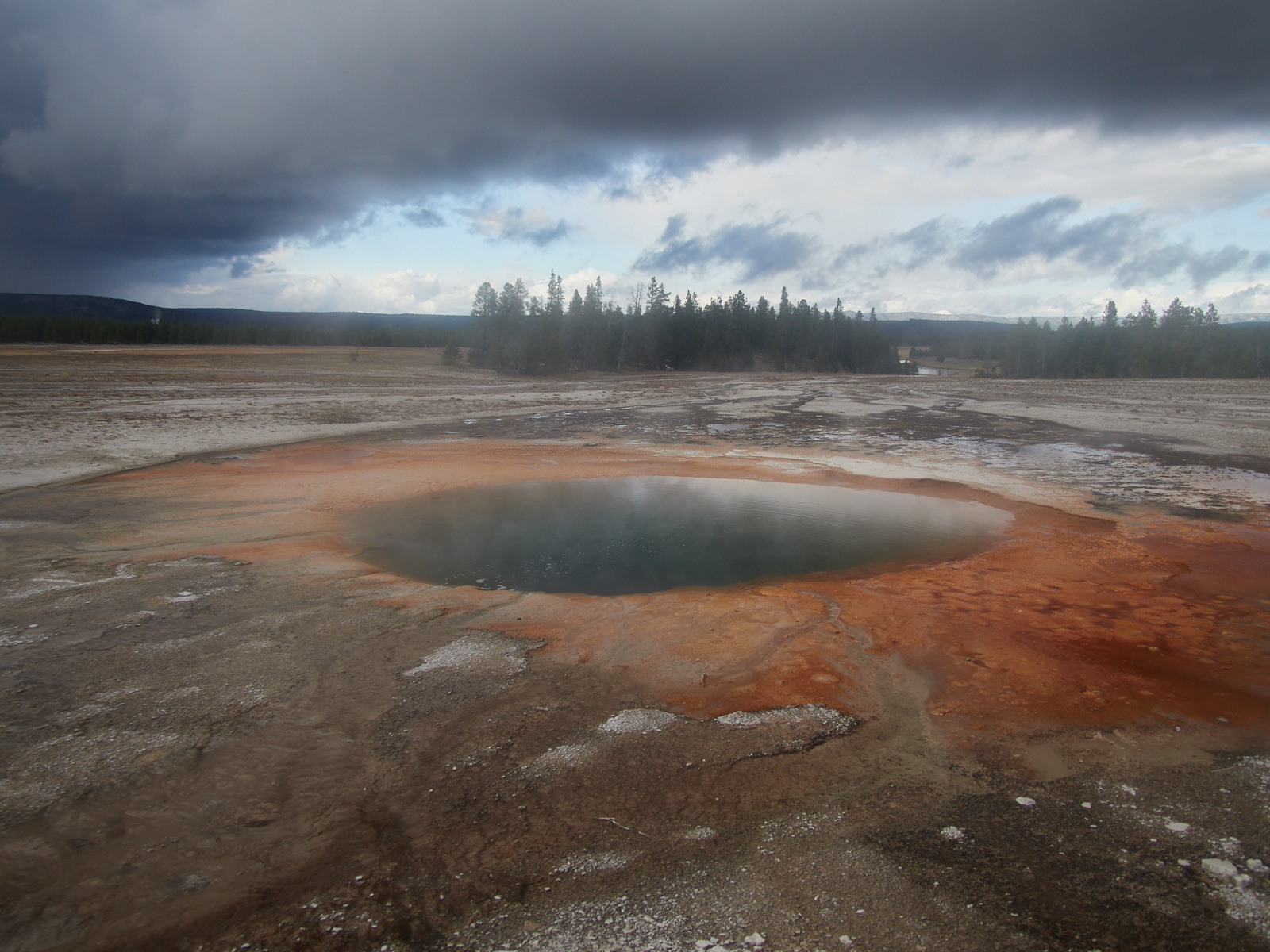 For my next stops, I continued along the path I had set for myself, hitting up arbitrary geothermal features that I marked on the map, and briefly doing a very lovely drive down Firehole Lake Drive and a brief stop at Gibbon Falls.

My final stop was the Artists' Paintpots, home to Blood Geyser. 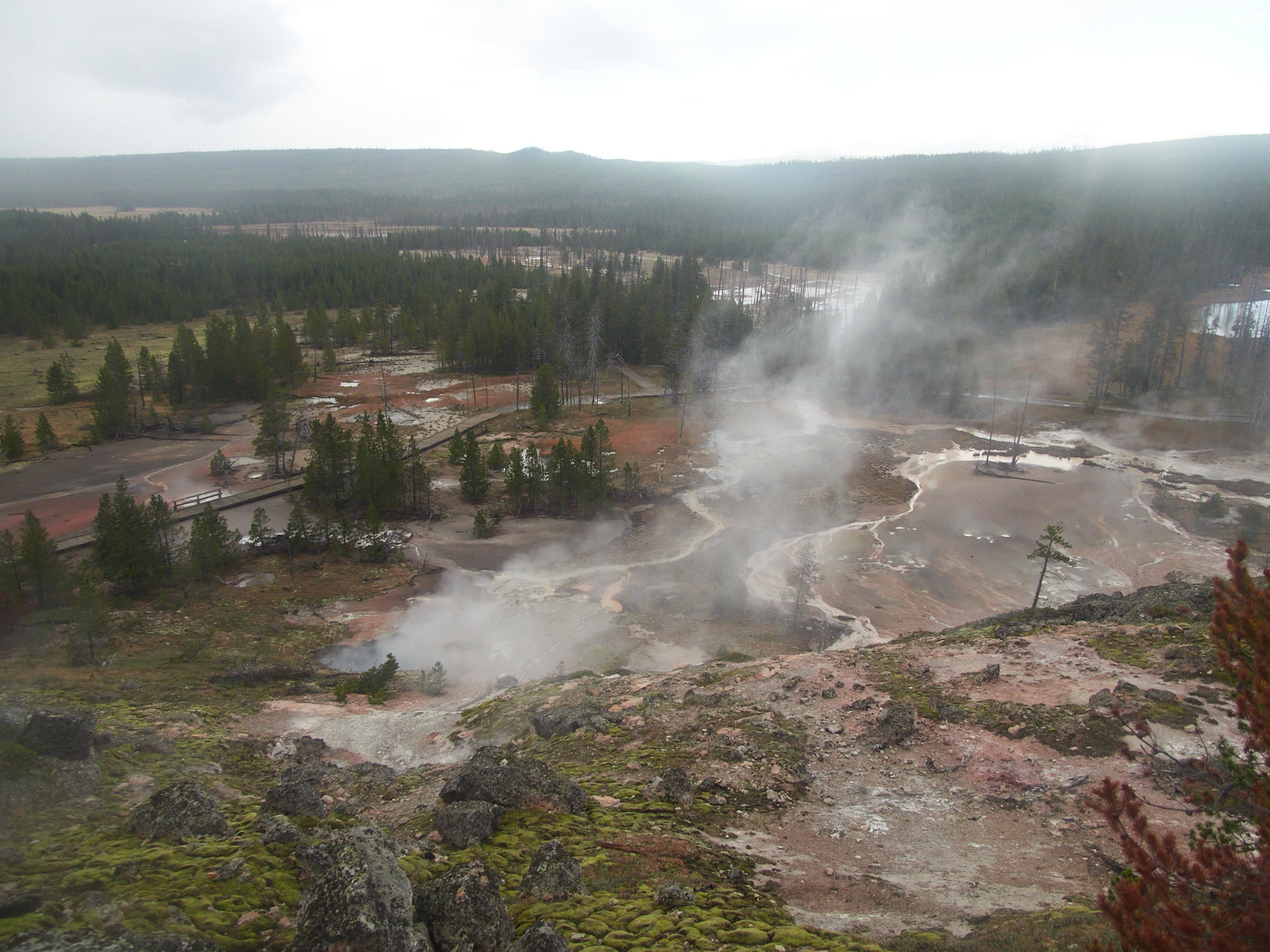 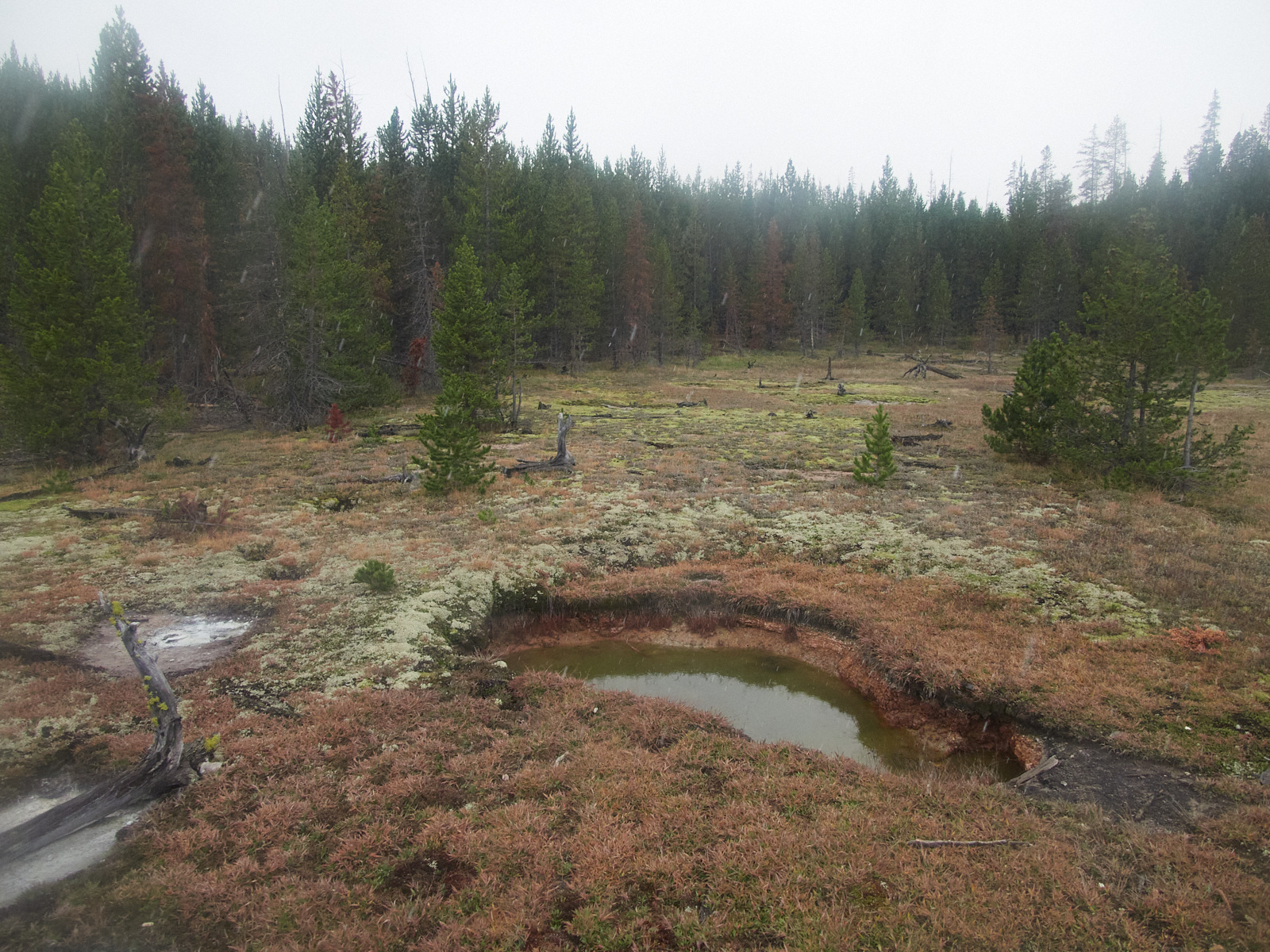 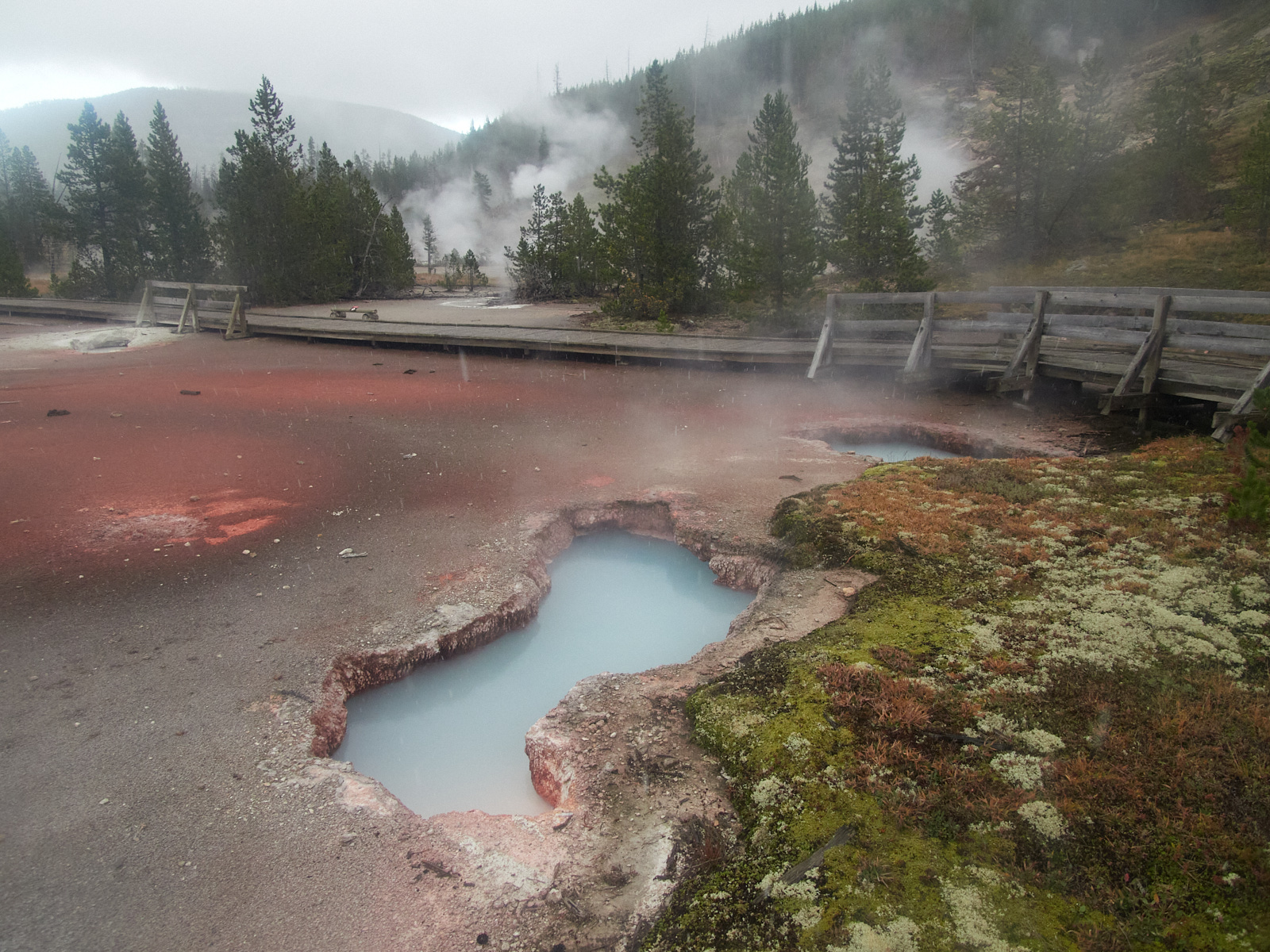 I decided to stop exploring because the snow, again, started falling.

As I completed a dinner run to Gardiner, MT, where my burger turned out to be much superior to Sunday night's pizza, I reflected on how quickly my time in the park had passed.

There are few places in the world as beautiful as Yellowstone, few places I'd rather pass my time at. Few places I'd find myself unpreparedly wishing for long underwear and hiking boots.

The next day would be my last in the park, and yes, a last chance to steal glimpses of its beauty and unusual geothermal features. After that, I would be staying in the Colter Bay Campground, visiting the Rocky Mountains.

I only hoped that my tent would be less frosty there...