Given the amount of mileage I had hiked over the past two days, I was pretty beat.

My original plan was to spend the night just across the border into Oregon, but my original Airbnb booking cancelled on me. (No surprise given my track record with Airbnb.)

This meant that I was instead heading to a campground further north, and this decision also motivated my lack of a breather before starting out on one last Redwood Hike.

(Okay, okay, I did stop for a burger and peanut butter milkshake first, but that hardly restored my sapped stamina from the past two days.)

My location: Jedediah Smith Redwoods State Park, just east of Crescent City. And gosh, was it worth a visit!

It was home to some of the most idyllic sections of forest, where golden rays of light just hung in the air, between the big trees.

Despite taking in a lot of beauty, and taking my all-time favorite forest photos (so far) I also managed to miss the area's two star attractions: the boy scout tree itself, and the waterfall at the end of the trail.

The trail (not unlike myself) was worn, and I turned back early and skipped an all important unmarked side trail. (Alas!)

Getting to this trail is itself an adventure, because you basically get to drive on a mud road that's about a single lane wide in most sections, past ginormous trees. I hate to claim that the drive is as scenic as the trail, but it almost is. It certainly rivals it.

And, I certainly couldn't resist snapping a photo. 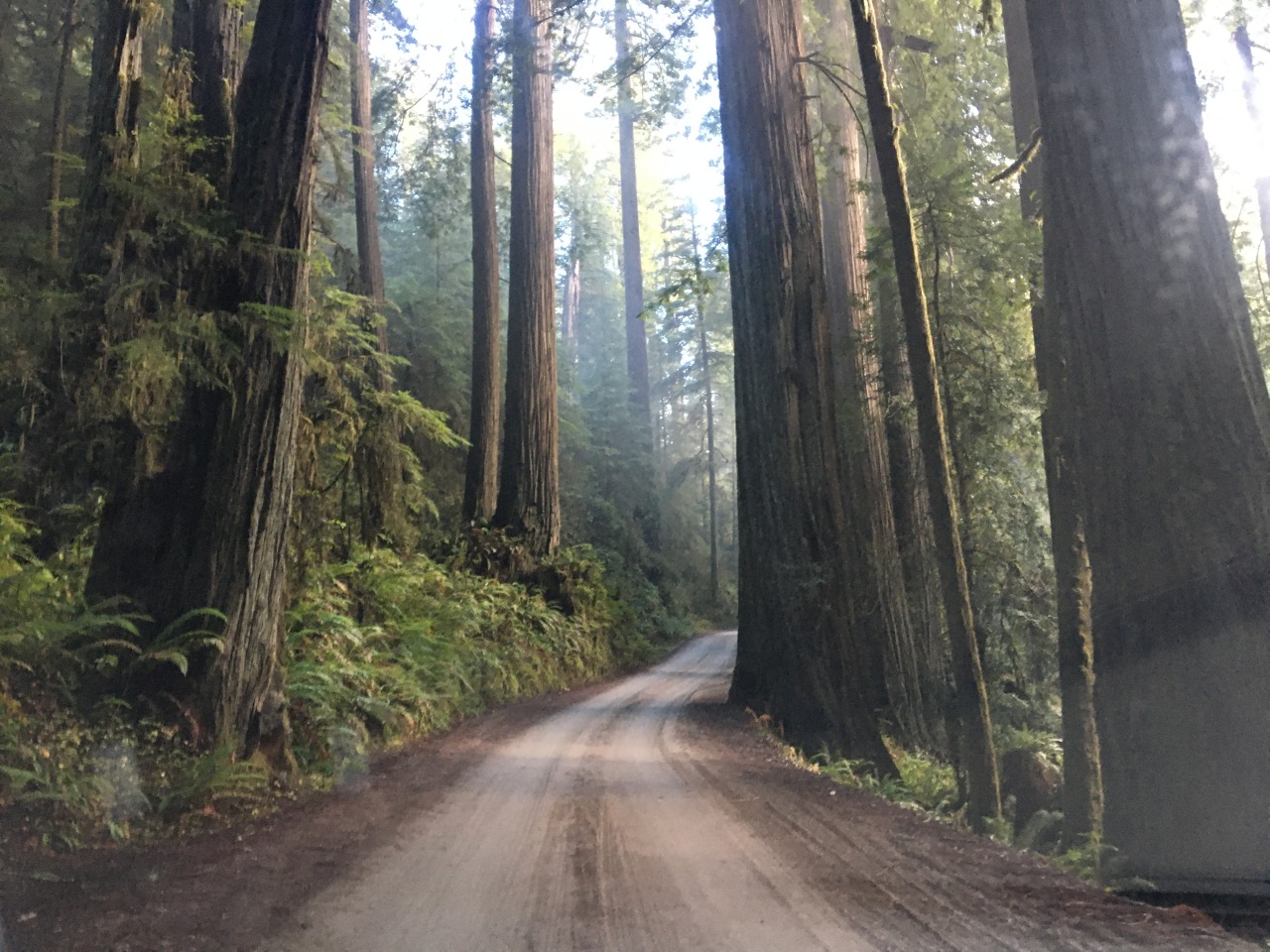 I had no trouble finding parking and embarking on the trail itself.

David Baselt's Redwood Hikes website has a very useful webpage on the trail, which provides quite a lot of useful detail. 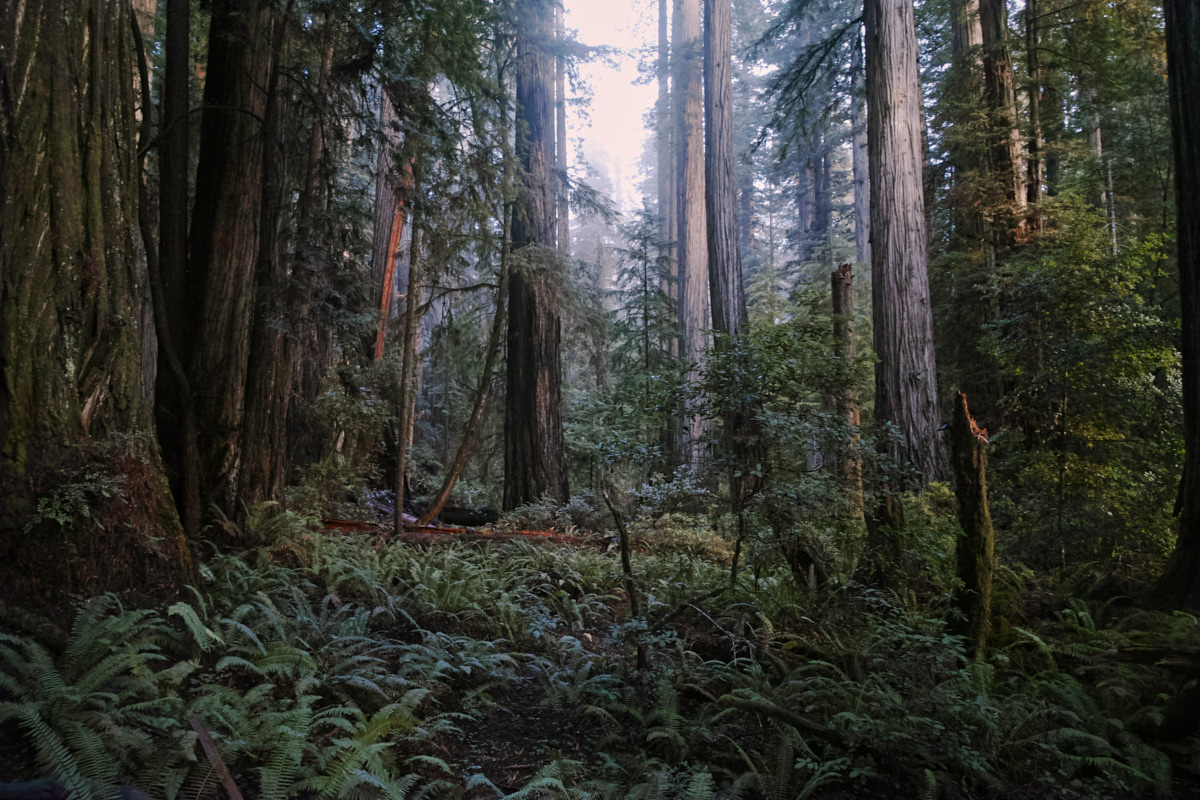 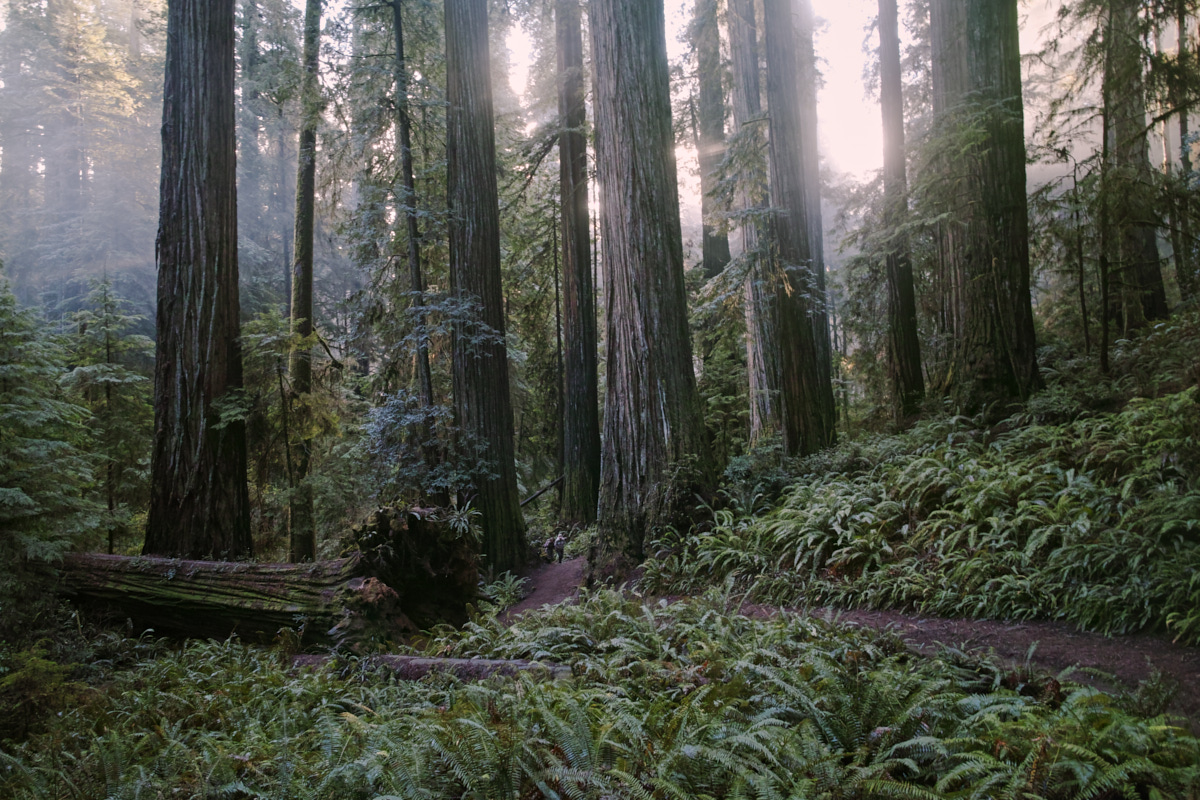 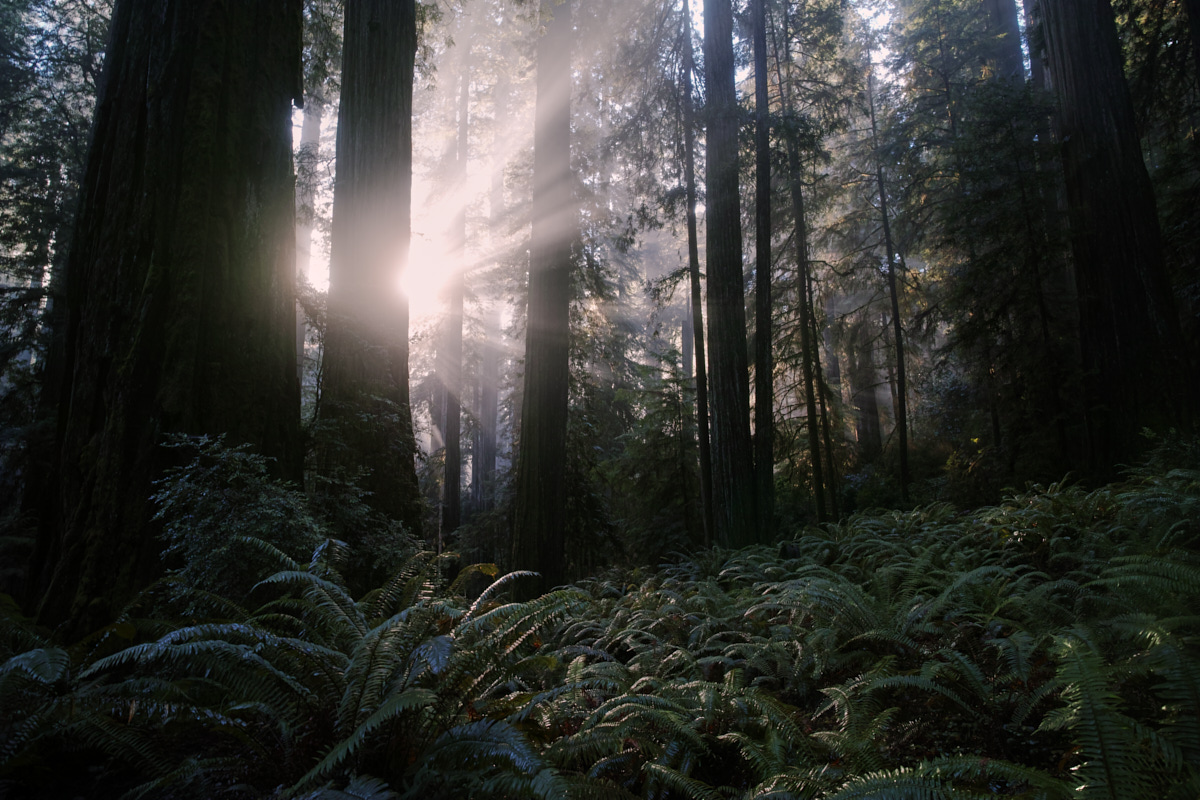 One point is the following:

"Due to heavy use the trail has become wide and somewhat rough, with lots of exposed roots for the entire length of the hike, and some areas are a little muddy even in summer."

This is most certainly true, and the terrain definitely could be more pleasant to walk along. 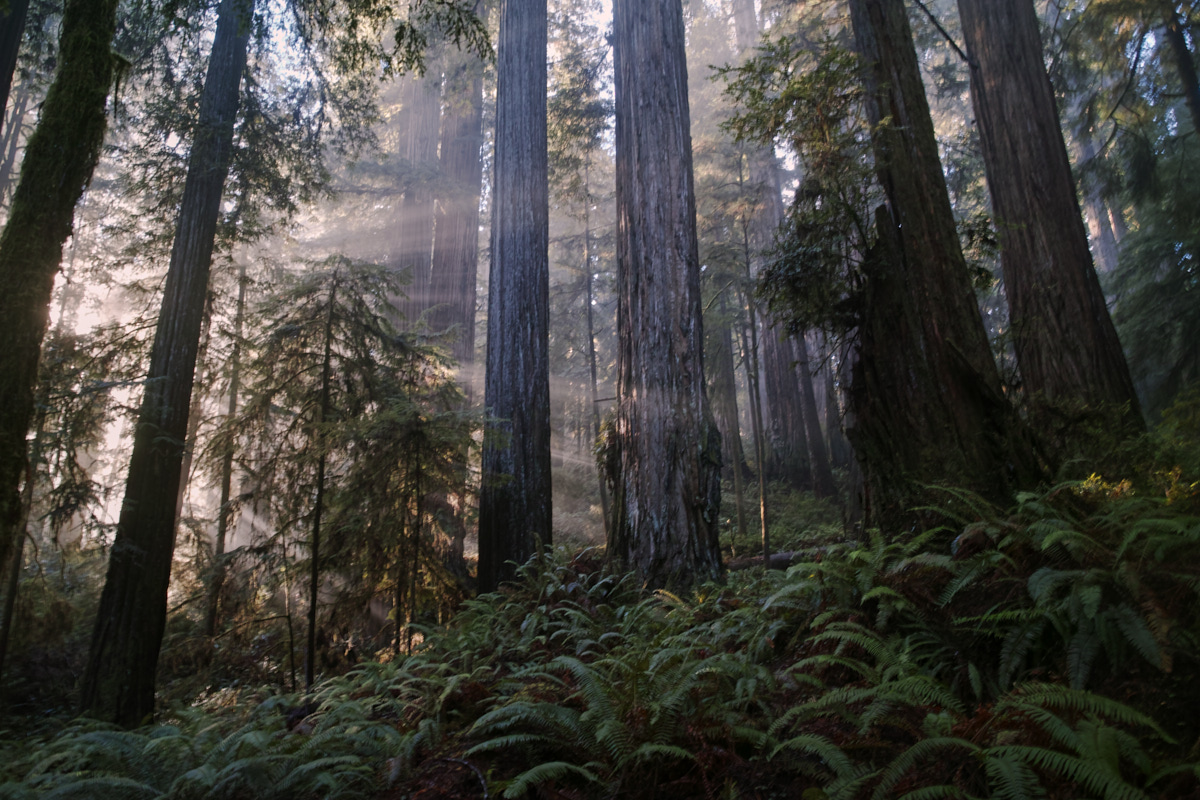 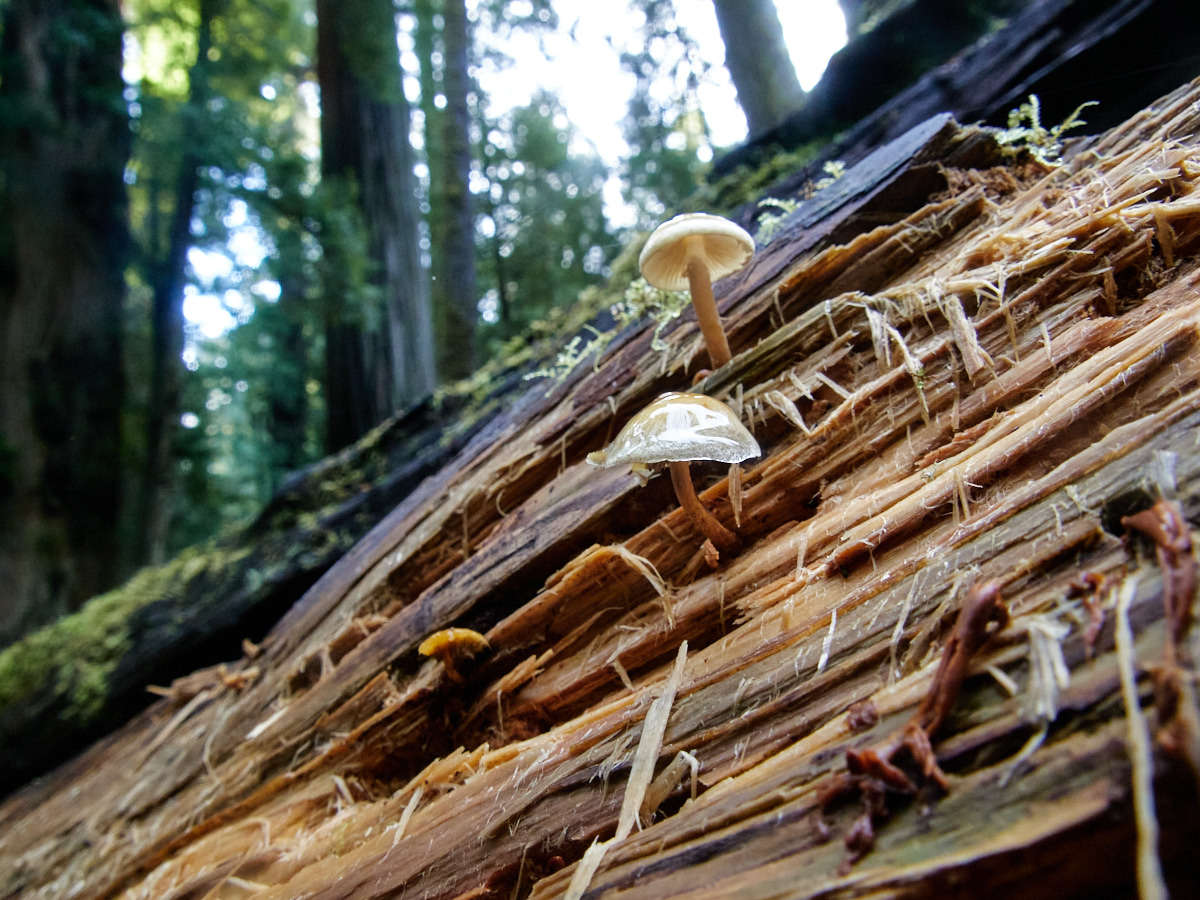 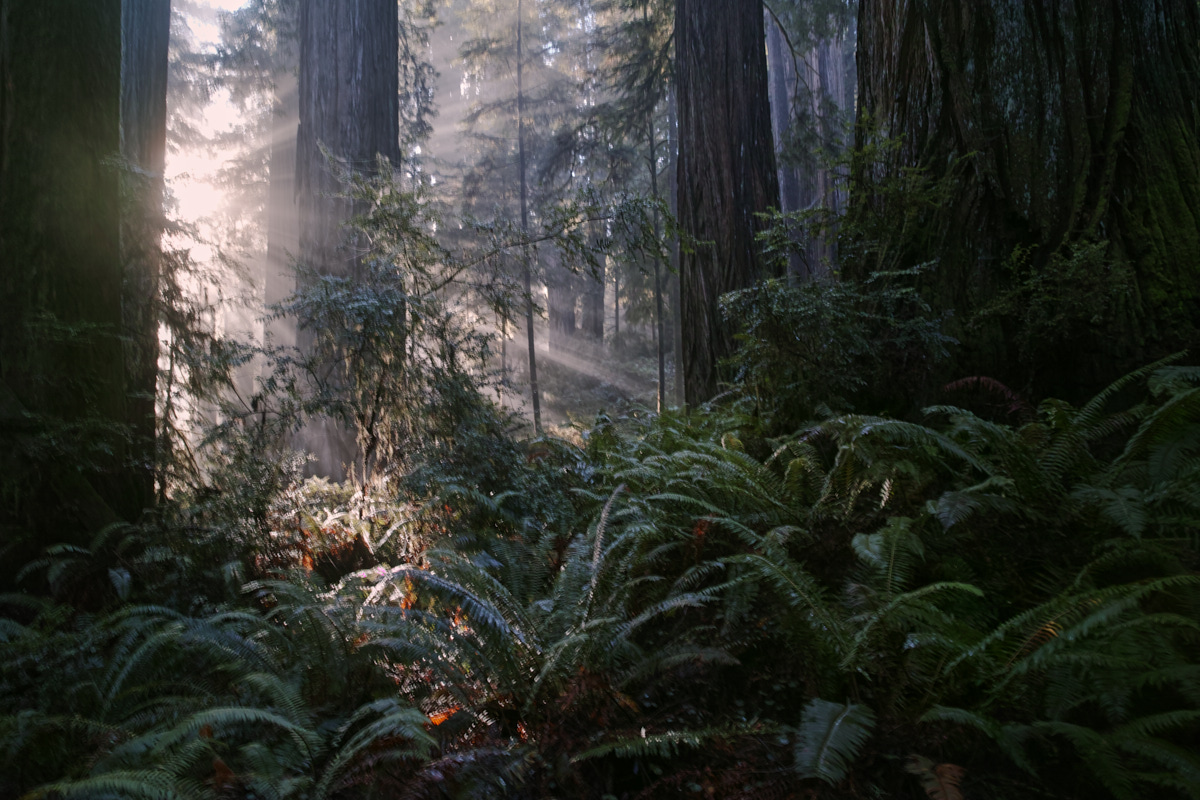 And let me quote David Baselt again, one last time:

"The Boy Scout Tree Trail is best on a sunny day. Jed Smith’s unique brilliance is a big part of what makes this trail so great, and the woods can get kind of drab when the sun isn’t out."

I think this is true as well. I took most of these photos towards the earlier part of the hike, and as I went on, the sun seemed to dissipate a bit. The trees felt smaller, the area less spectacular. I started to feel a bit less magic, and that's a damn shame.

Because there is a lot of magic to take in here! 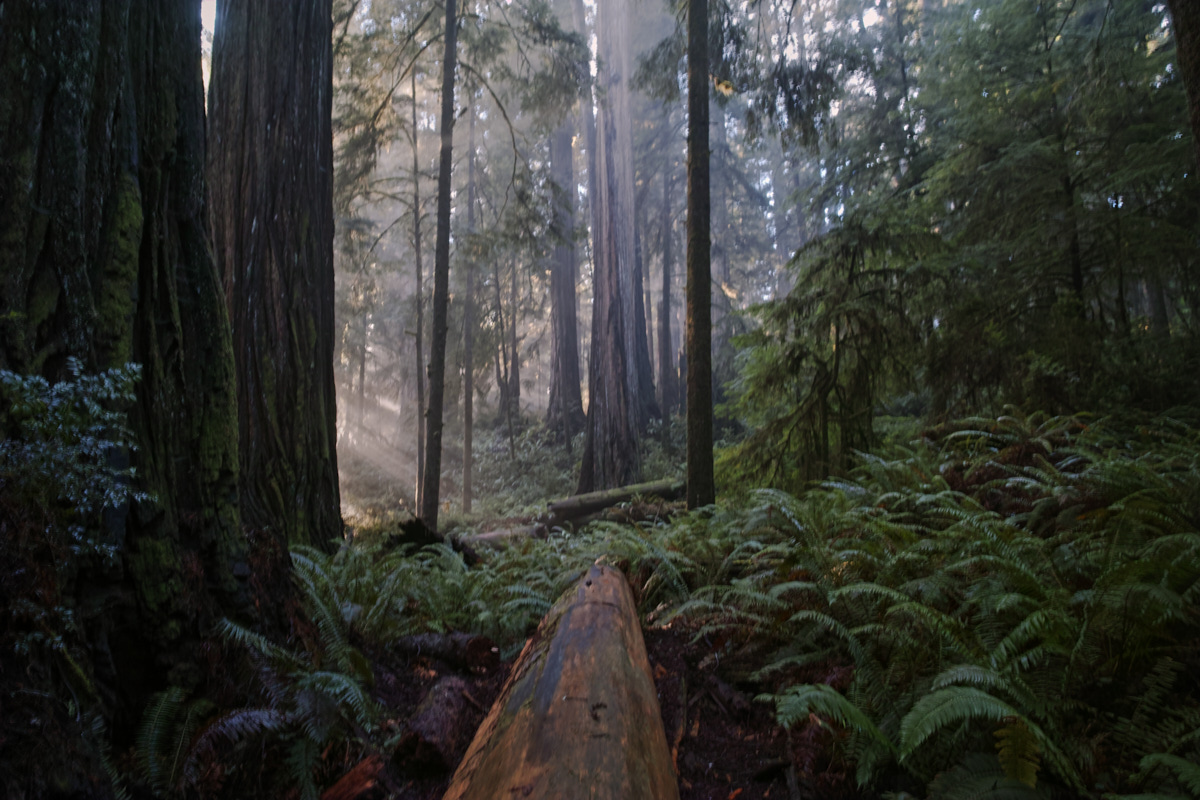 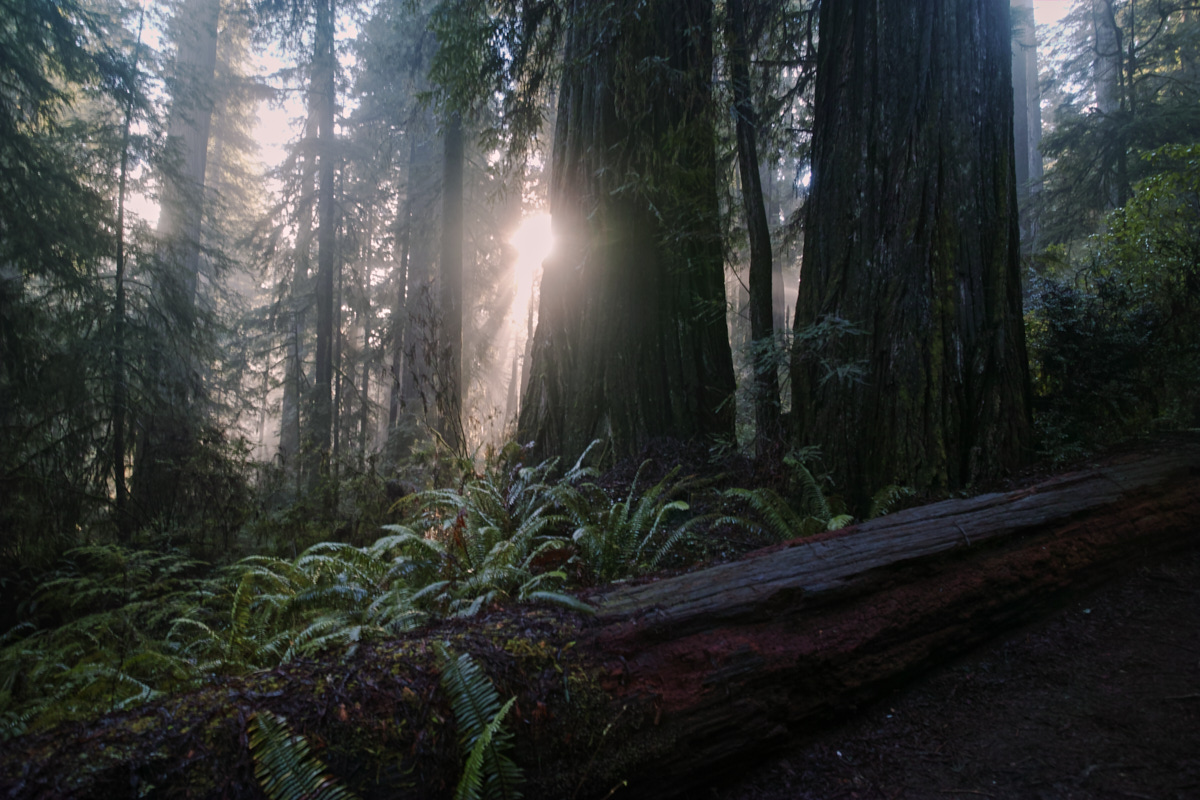 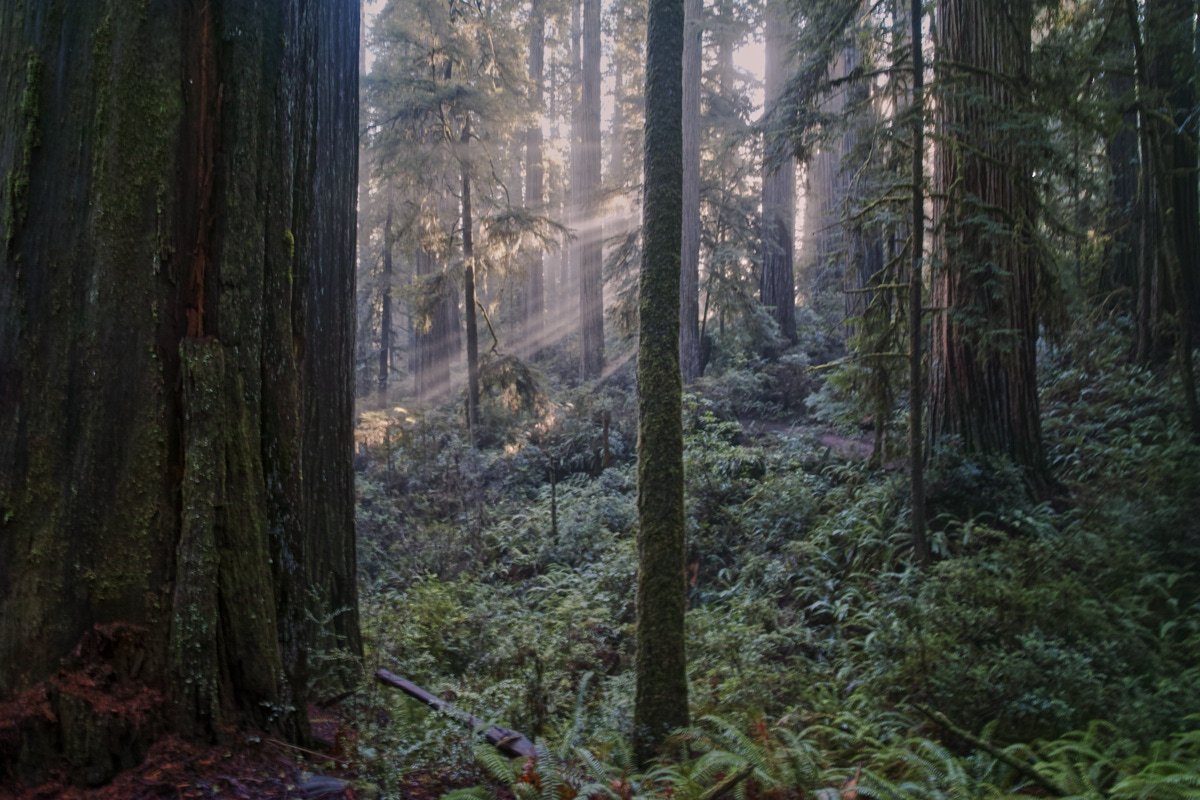 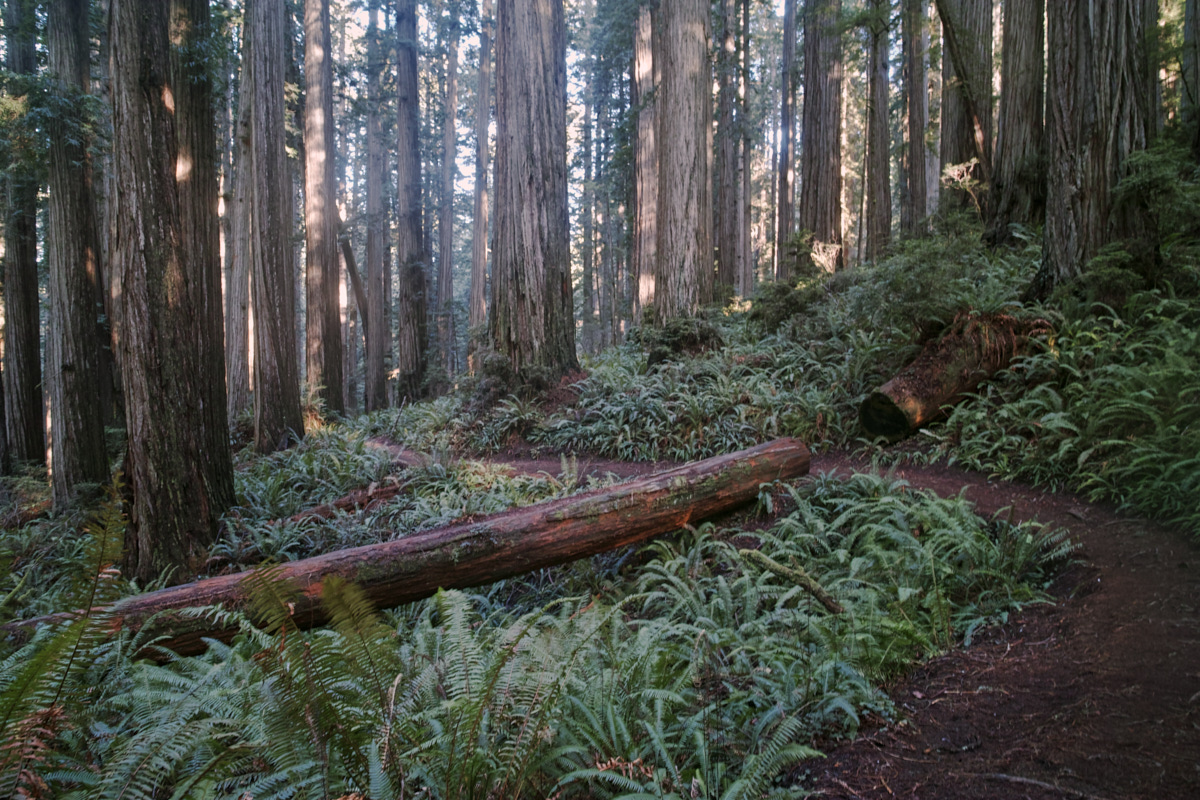 So much magic that I put so much less effort into choosing only the best photos to post. They're all winners, right?

(Feel free to disagree, but maaaaan was there just some cool lighting earlier in the day.) 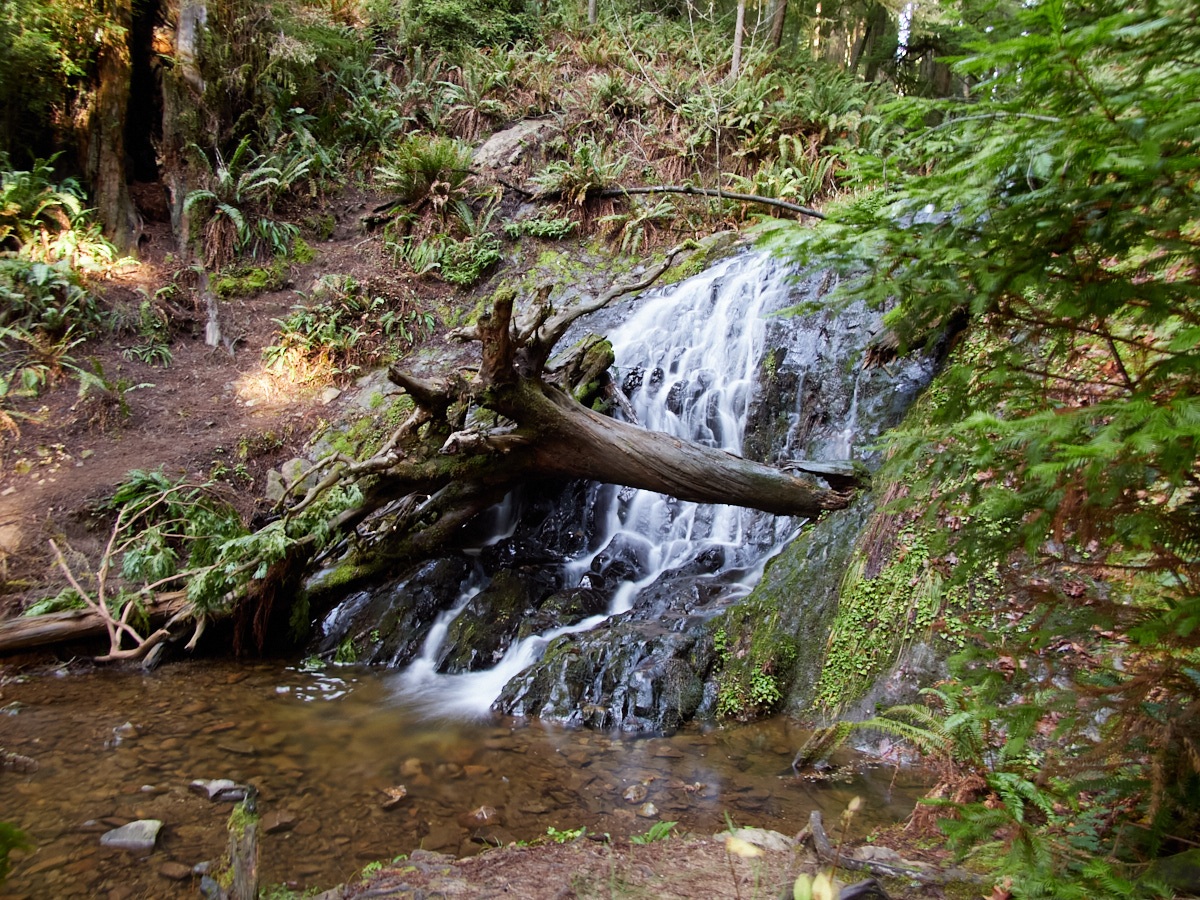 This is about where I turned around. Not too far to head to the waterfall.
×

Eventually, I reached a small stream, with what looked like a small waterfall. Not a great ending, but a place where I reassessed the state of my mind and body, the up and down of the trail, and the longer than desired drive to where I was staying that night.

On reflection, I turned around.

Looking at these photographs now, I wish I had kept going for just a little bit longer, to see if there was some more magic in the woods, to check out the actual climactic waterfall at the end of the trail. To soak in and savor my last moments of Redwood brilliance in the January sunlight.

But, no. I listened to my legs and my eyelids, and it was probably the smart choice.

After the Boy Scouts

I drove back down my new favorite dirt road, and stopped back in Crescent City at my new favorite Armenian-American BBQ joint for a pulled pork wrap and an Armenian coffee.

Then, I crossed into Oregon, where the cost of gasoline was immediately a dollar cheaper. (I can only imagine how astronomical the cost of gas is around Crescent City with our latest runs of war and inflation...) 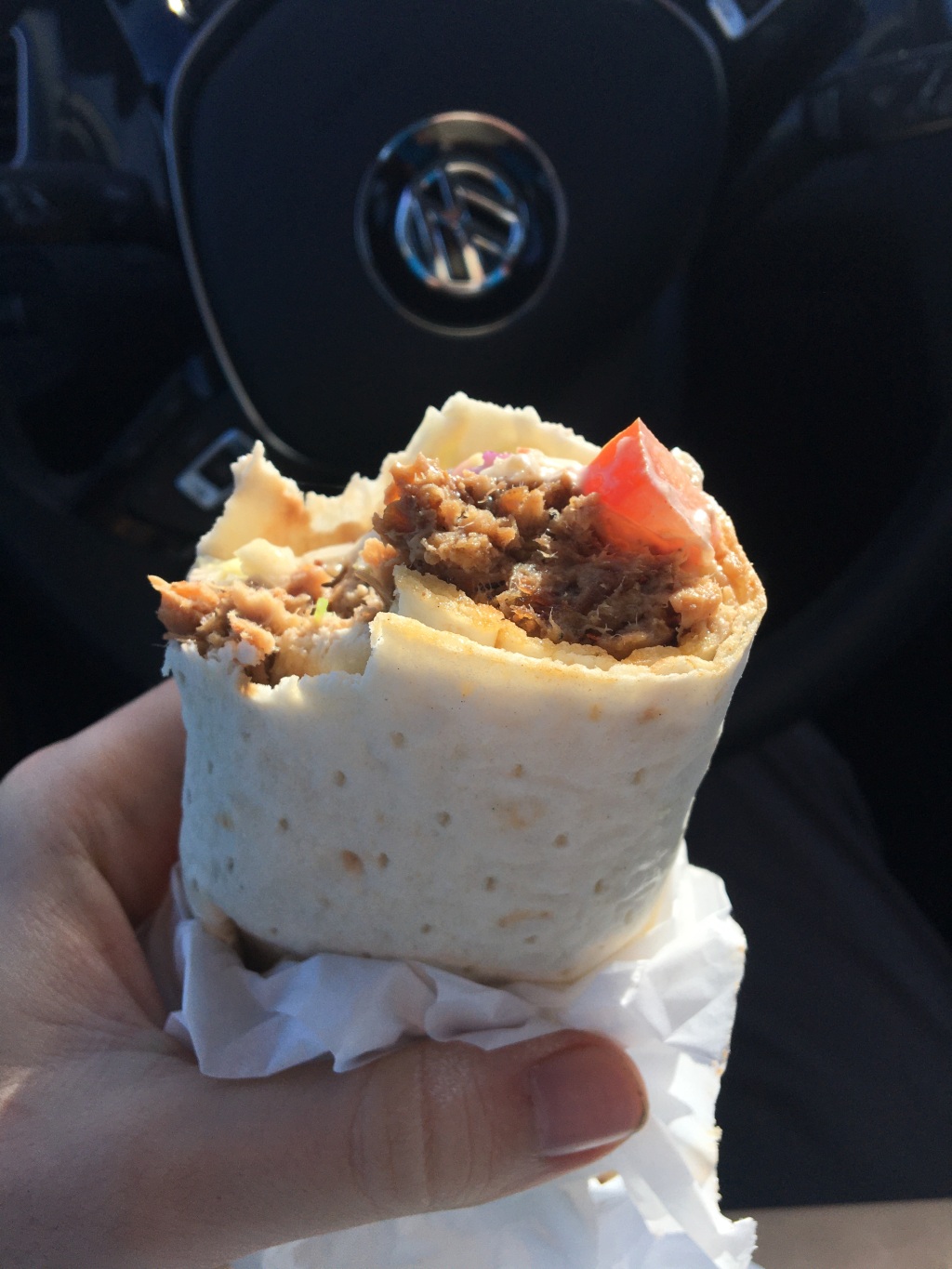 Most of the rest of my days heading northward would be spent in Oregon. My three-day weekend exchanged for a return to a digital nomadic lifestyle and a smattering of randomly chosen budget accomodation: indoor on workdays, outdoor the rest of the time.

No longer would I take the time for long, long hikes, but I would still have the time for waysides, stopovers, and bird watching.

I made virtually no stops on my way north from California, though. Just the Pistol River State Scenic Viewpoint. There was little point in stopping to take in the scenery most elsewhere when it was blanketed in a thick coat of fog. 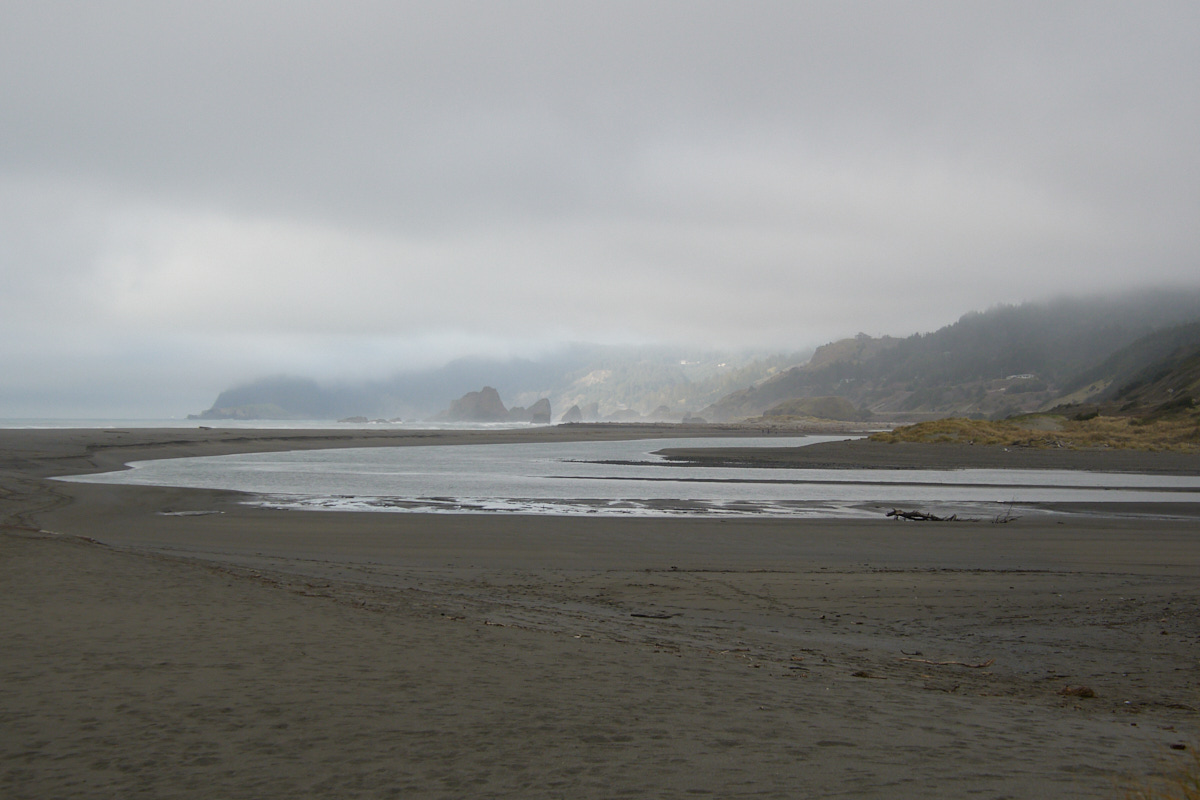 Eventually, I made my way to Sunset Bay State Park for a sound night's sleep. 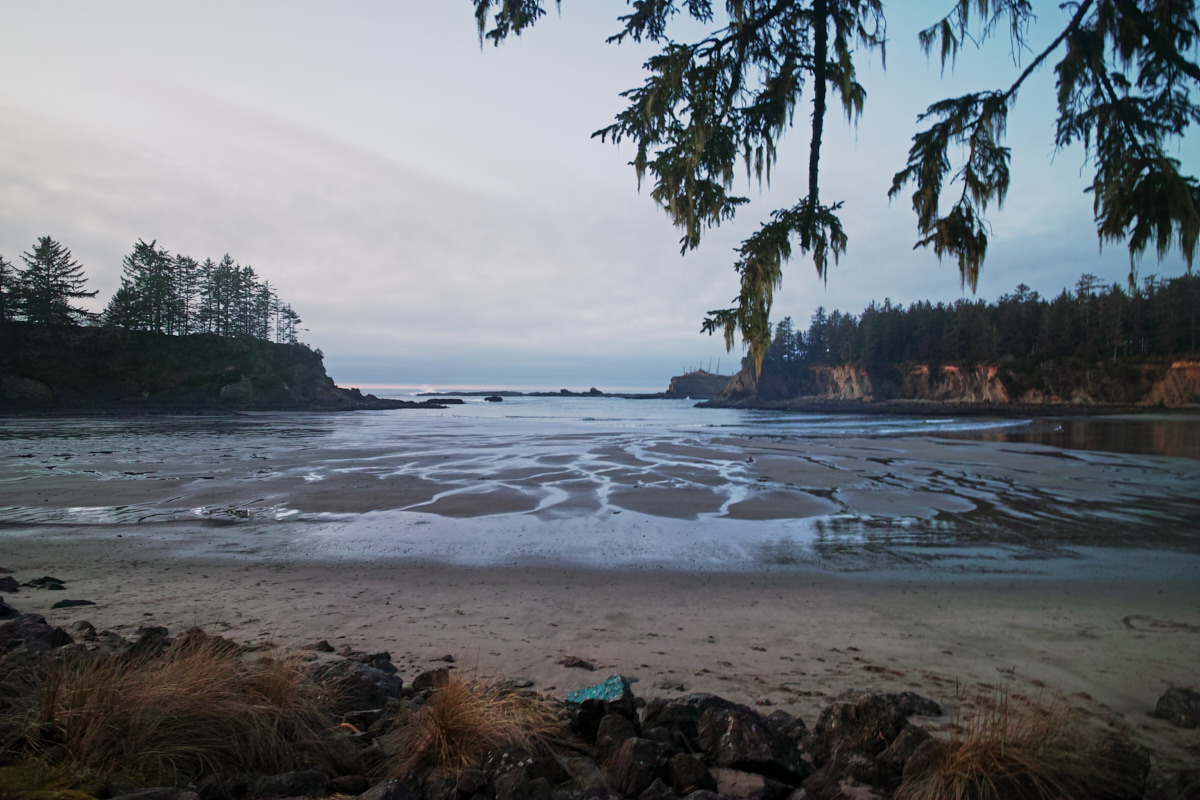 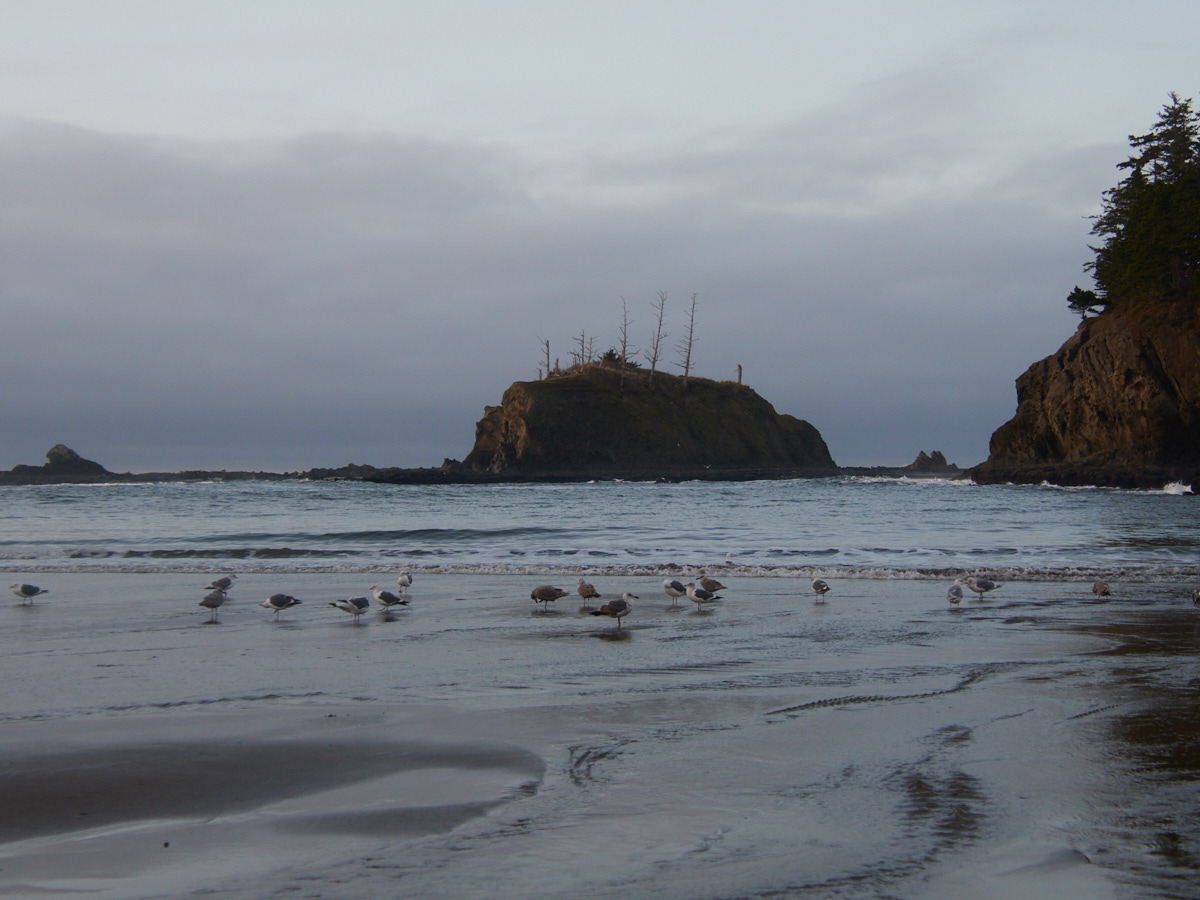 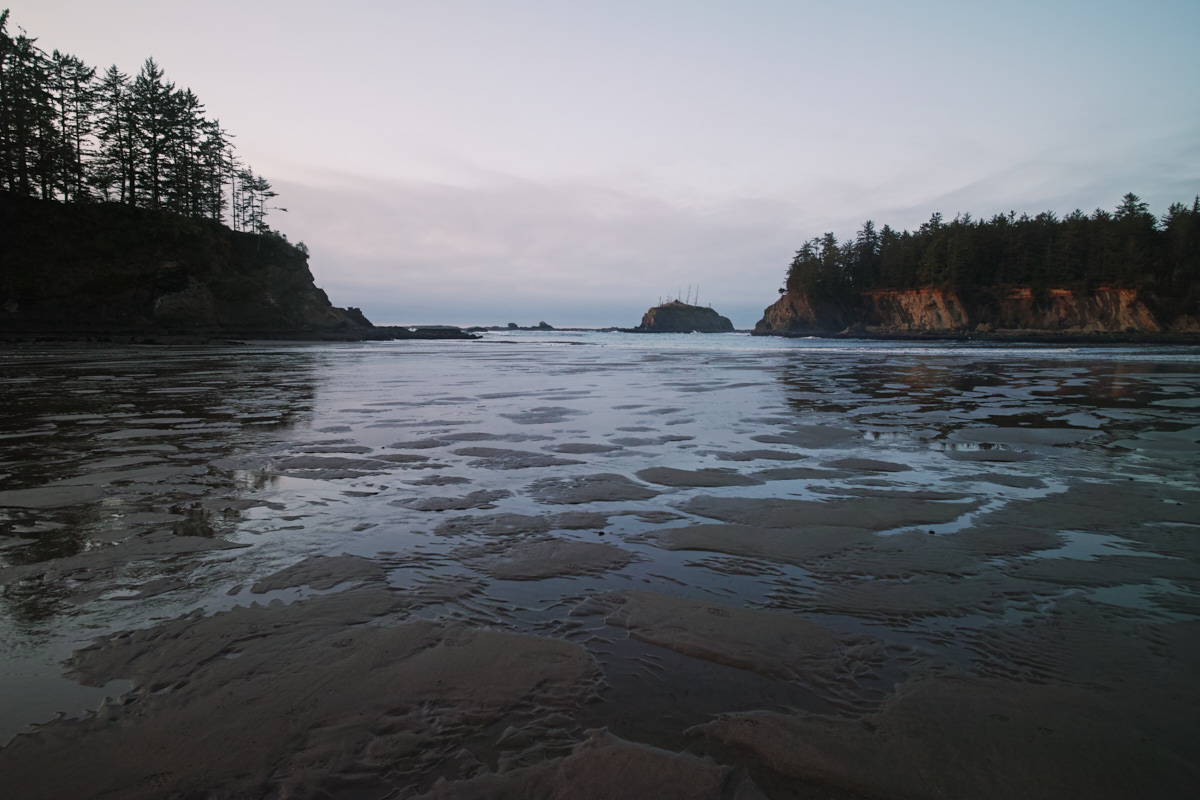 Little did I know I would wake to an unpleasant surprise.