Waking up in the Black Hills, I could already feel the throngs of tourists encroaching.

I opted to skip stopping at Mt. Rushmore, and bought a coffee and bagel in the highly patriotic town of Keystone. Neither were stellar, but they were both adequate insofar as things inside my belly go.

Onward, I drove for two-ish hours into Wyoming, and onto my first destination, a certain famous butte.

The name "Devils Tower" was first given to this butte in 1875 by Colonel Richard Irving Dodge, likely due to a misunderstanding in the interpretation of native names, which generally are more along the lines of "Bear's Lodge." As you can imagine, the new name provokes some ire, as does the idea of changing it...

For many tribes, the geological structure is a sacred place, and climbing it is sacrilegious. As a compromise, the national monument encourages climbers to not partake in climbing the tower during the month of June when many ceremonies are held near the grounds. However, it's a soft ban and some assholes climb it then anyway. 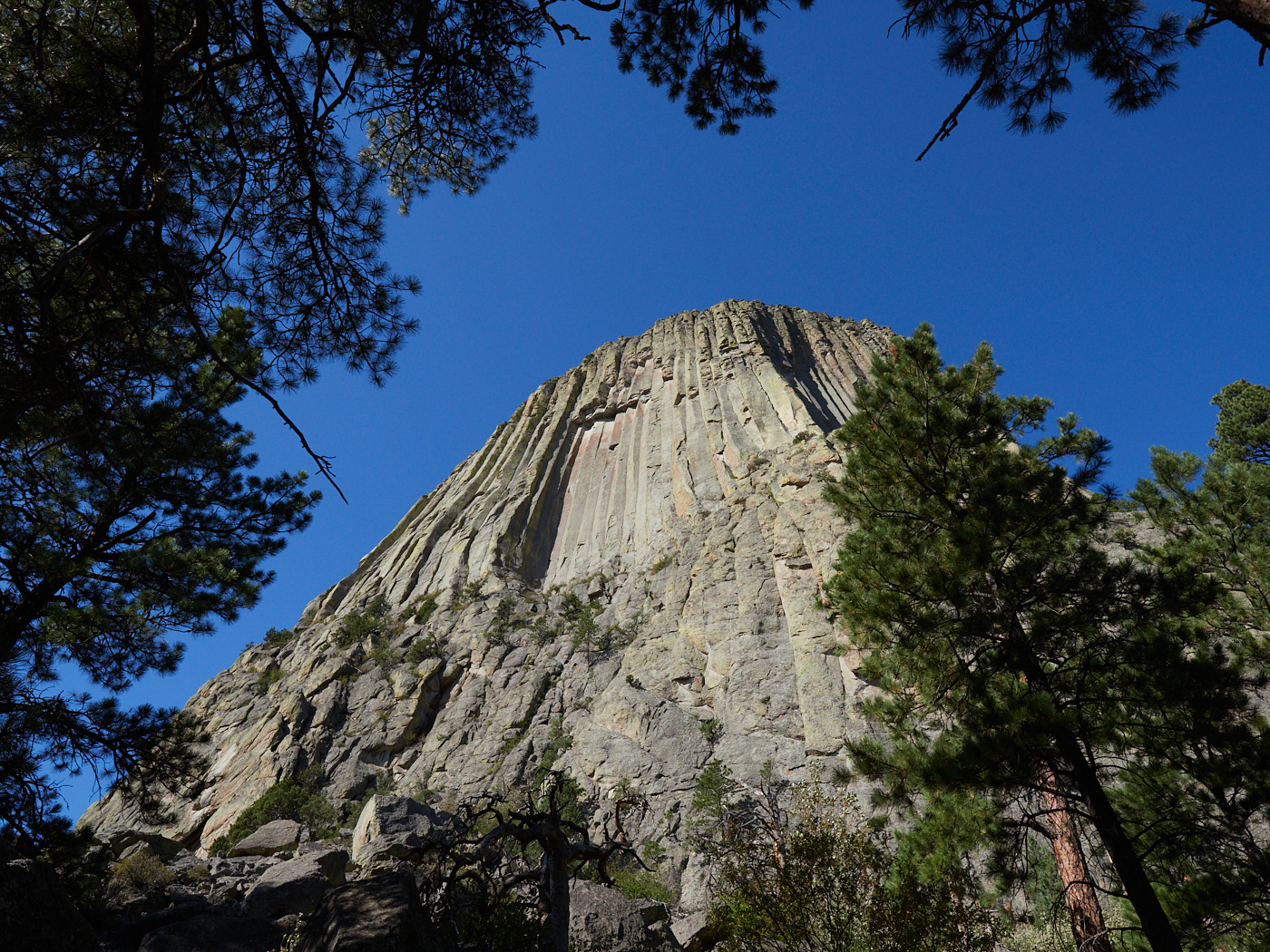 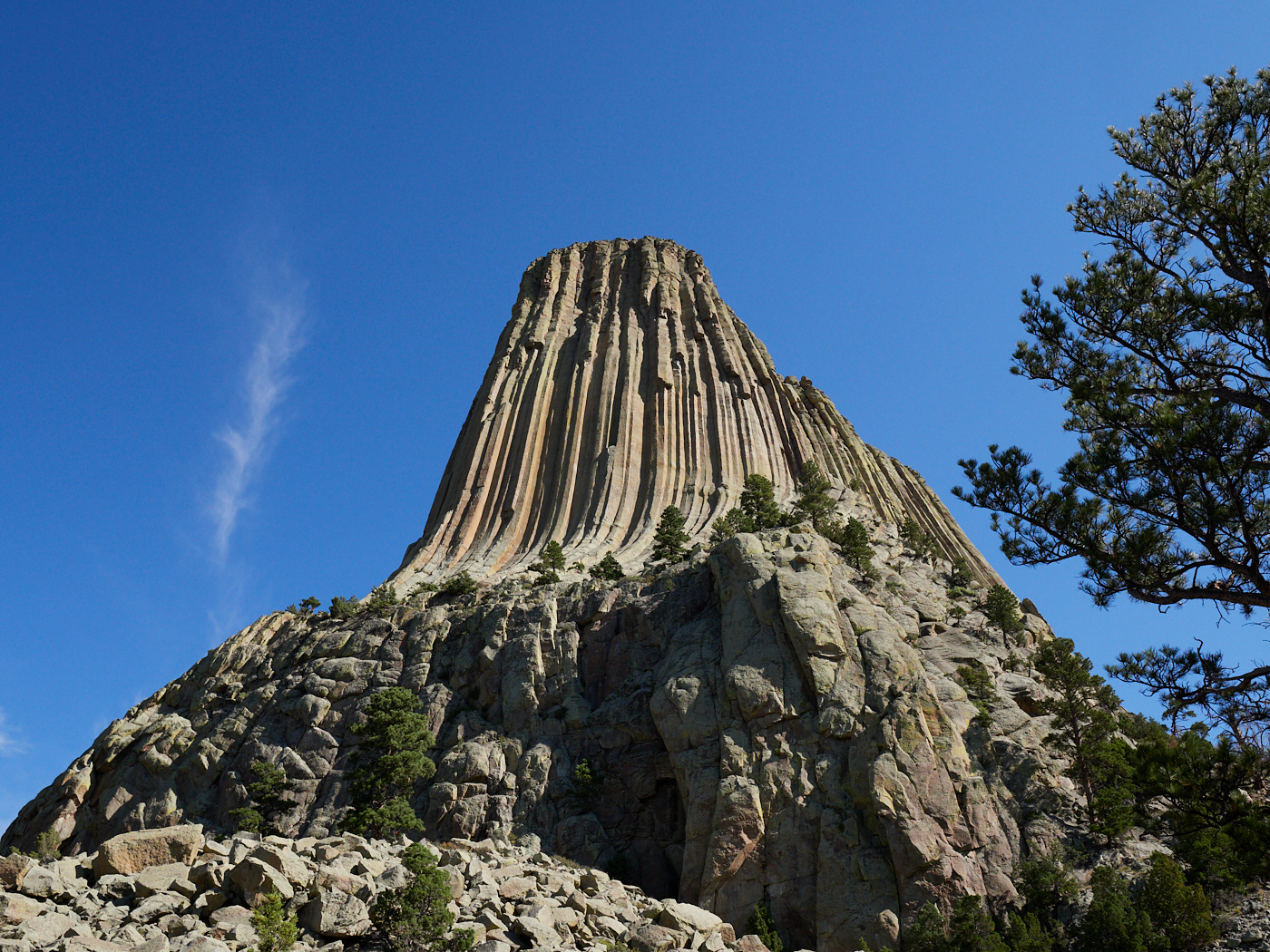 I rolled in at mid-morning. The parking lots were stuffed, the gift store had a line out the door due to COVID-era maximum allowed shopper limits, and the bathrooms had a line too -- easily the worst of anywhere I visited on my entire trip.

I came, I saw, I walked the trail around the base of the beautiful butte.

It was short & sweet and an excellent vantage point for various views of the tower itself, as well as climbers and birds. 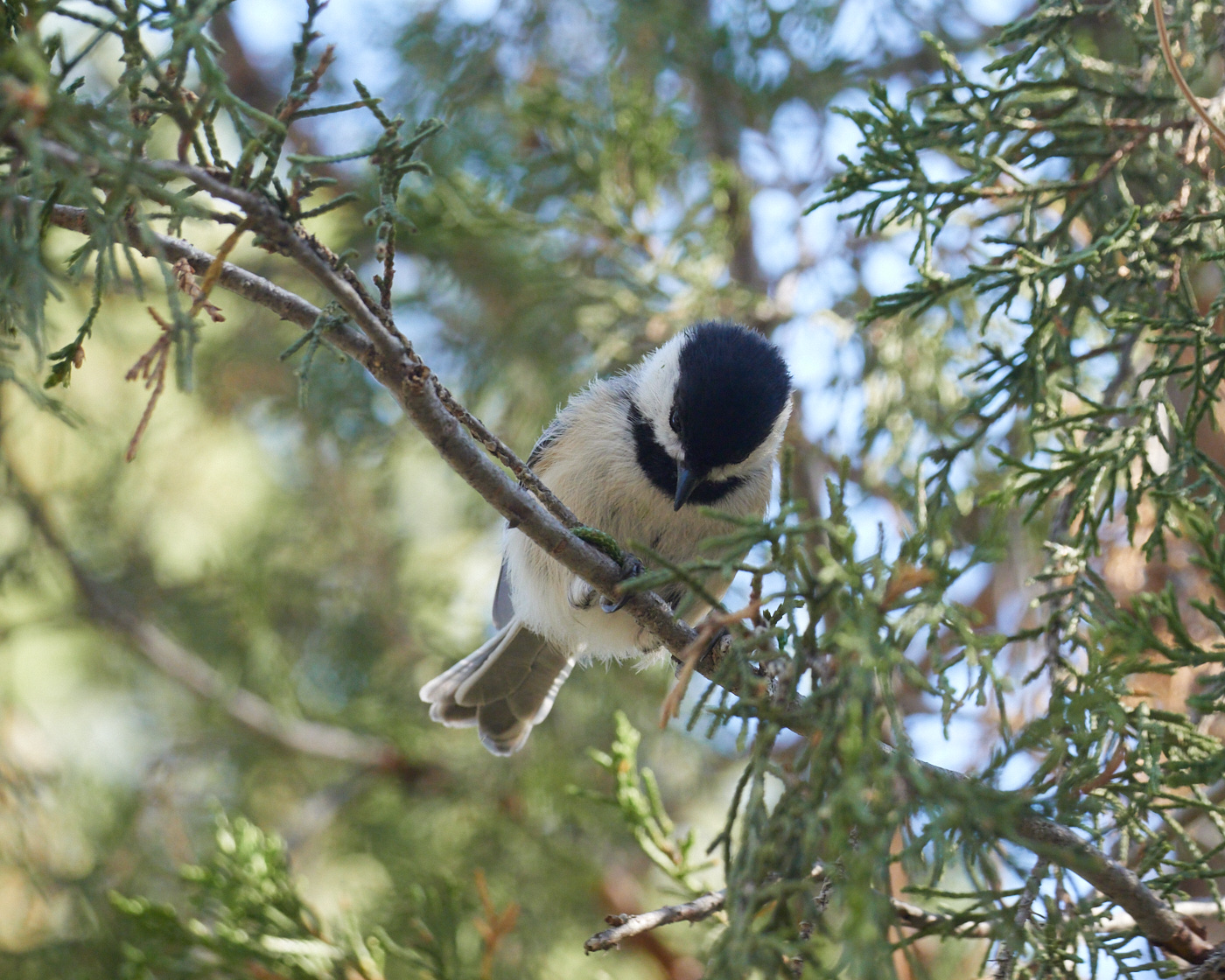 This is where I would have had a REAL good chickadee photo if I had realized the AF/MF switch on the lens was in the wrong position five seconds earlier than I did...
×
× 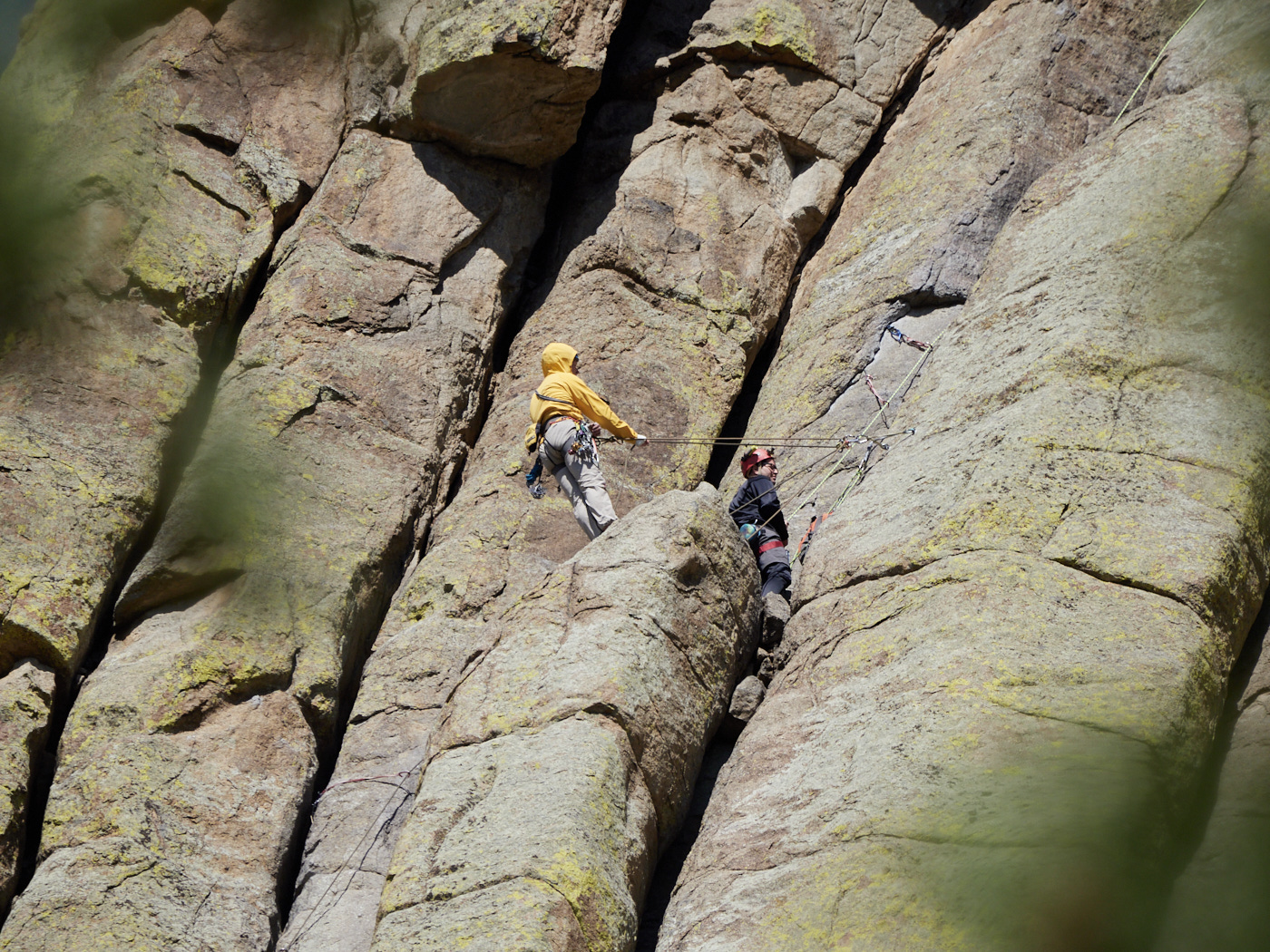 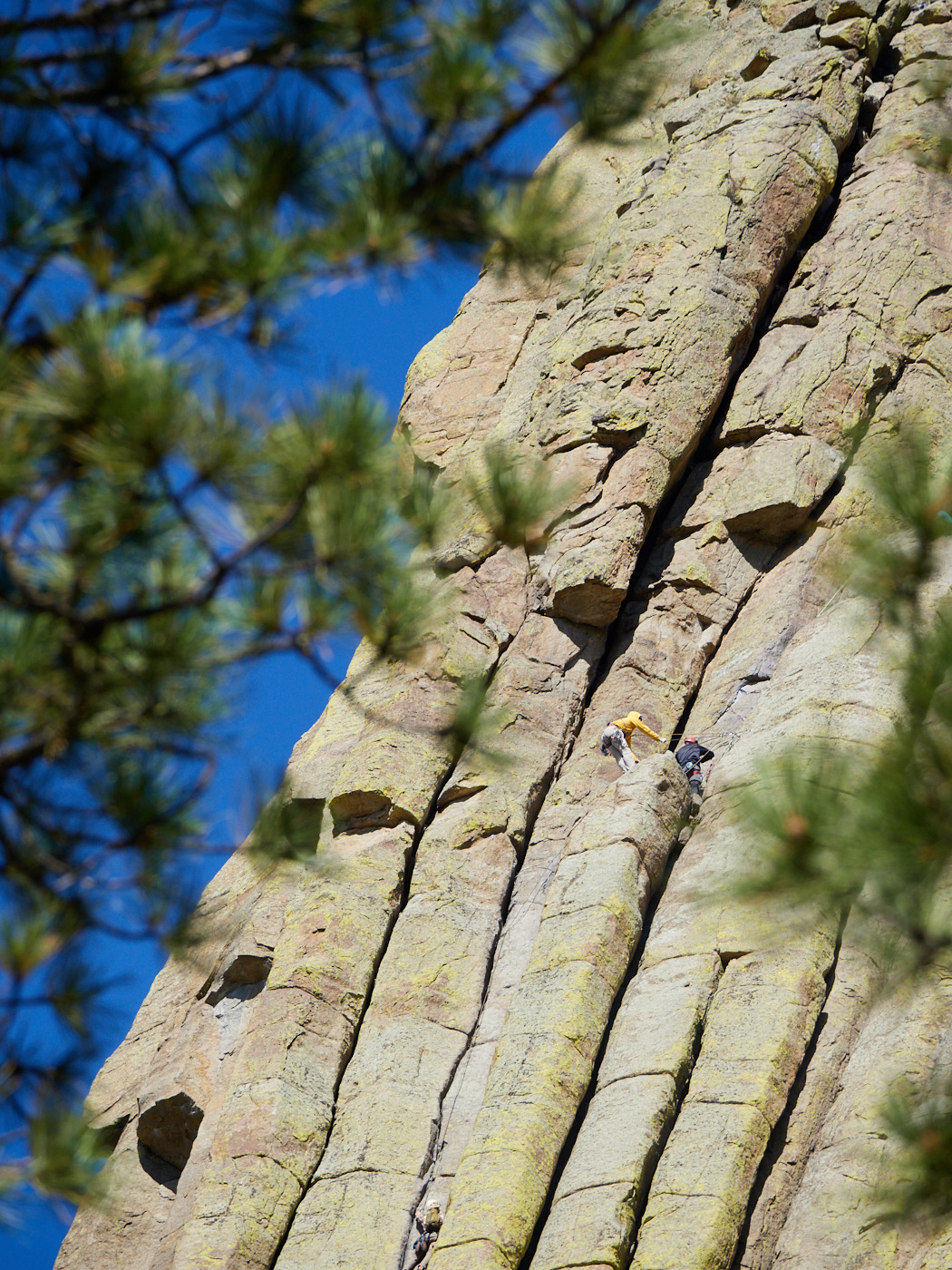 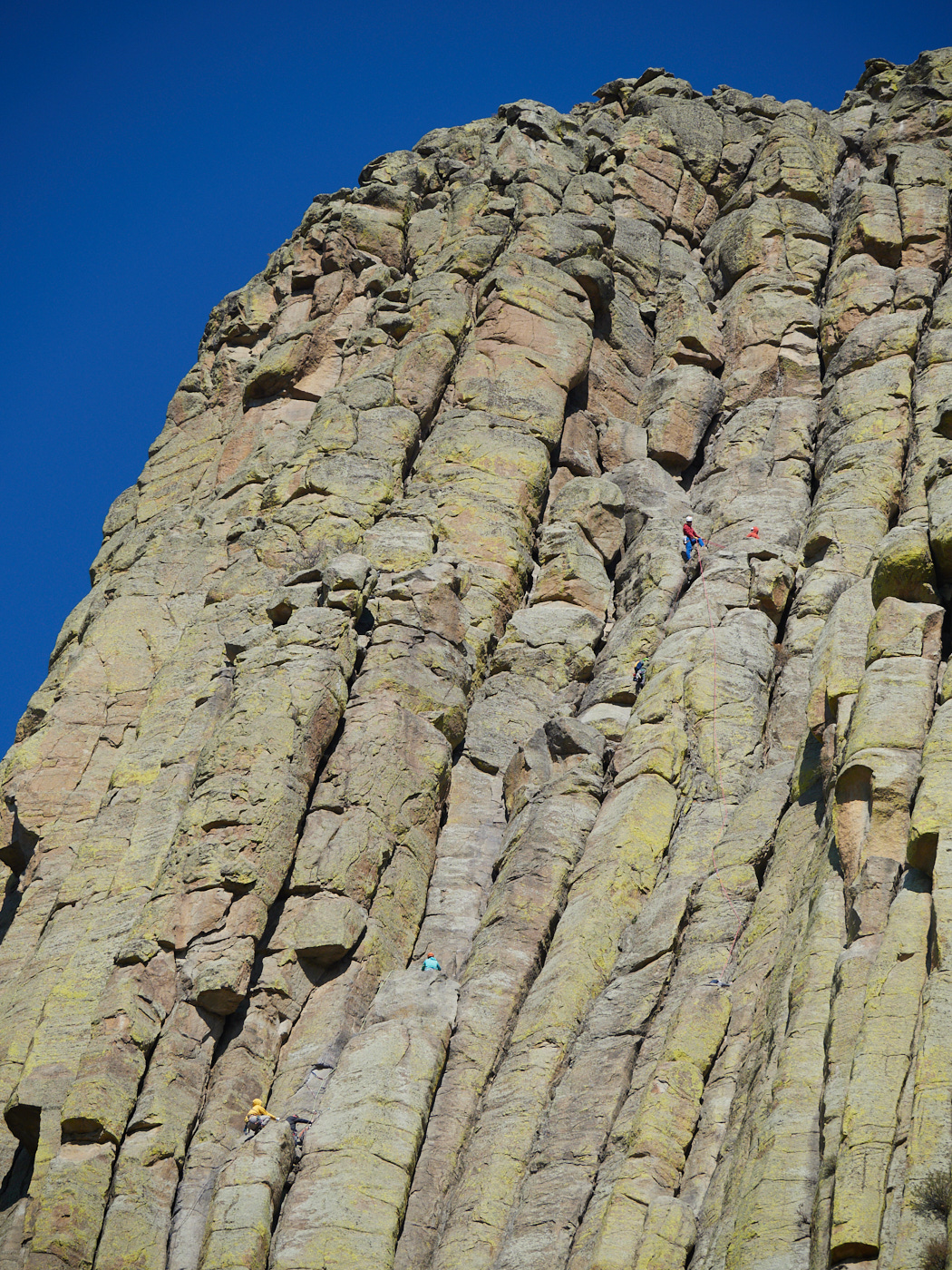 After my walk, I dropped a few postcards off at the nearby post office, and continued on my way, deeper into Wyoming...

Somewhere between the butte and my next destination, I stopped for lunch at a packed Frida Kahlo-themed Mexican restaurant. There I delighted in hearing lots of Spanish, enjoyed a delicious burrito, and was puzzled by the presence of flyers advertising the town's upcoming "Back the Blue Rally."

Is that what Frida would have wanted?

I hadn't sketched out a solid plan for Wyoming and beyond, but I figured it would be best to take a scenic route and stop somewhere interesting on my way from Devils Tower. A detour to visit an ancient medicine wheel seemed like a good idea. 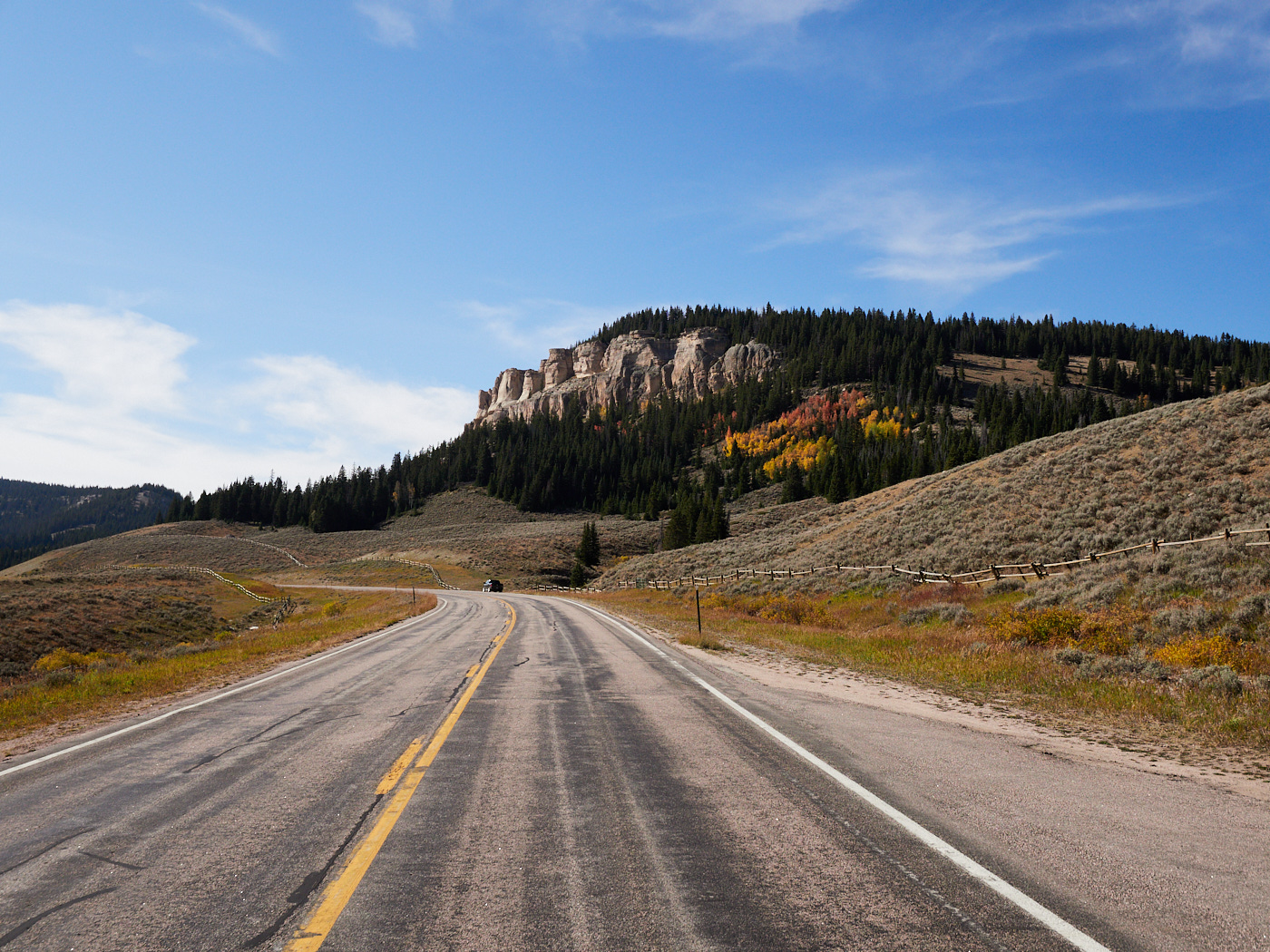 Incidentally, I will say that this section of driving was my absolute favorite stretch of highway on my way westward. 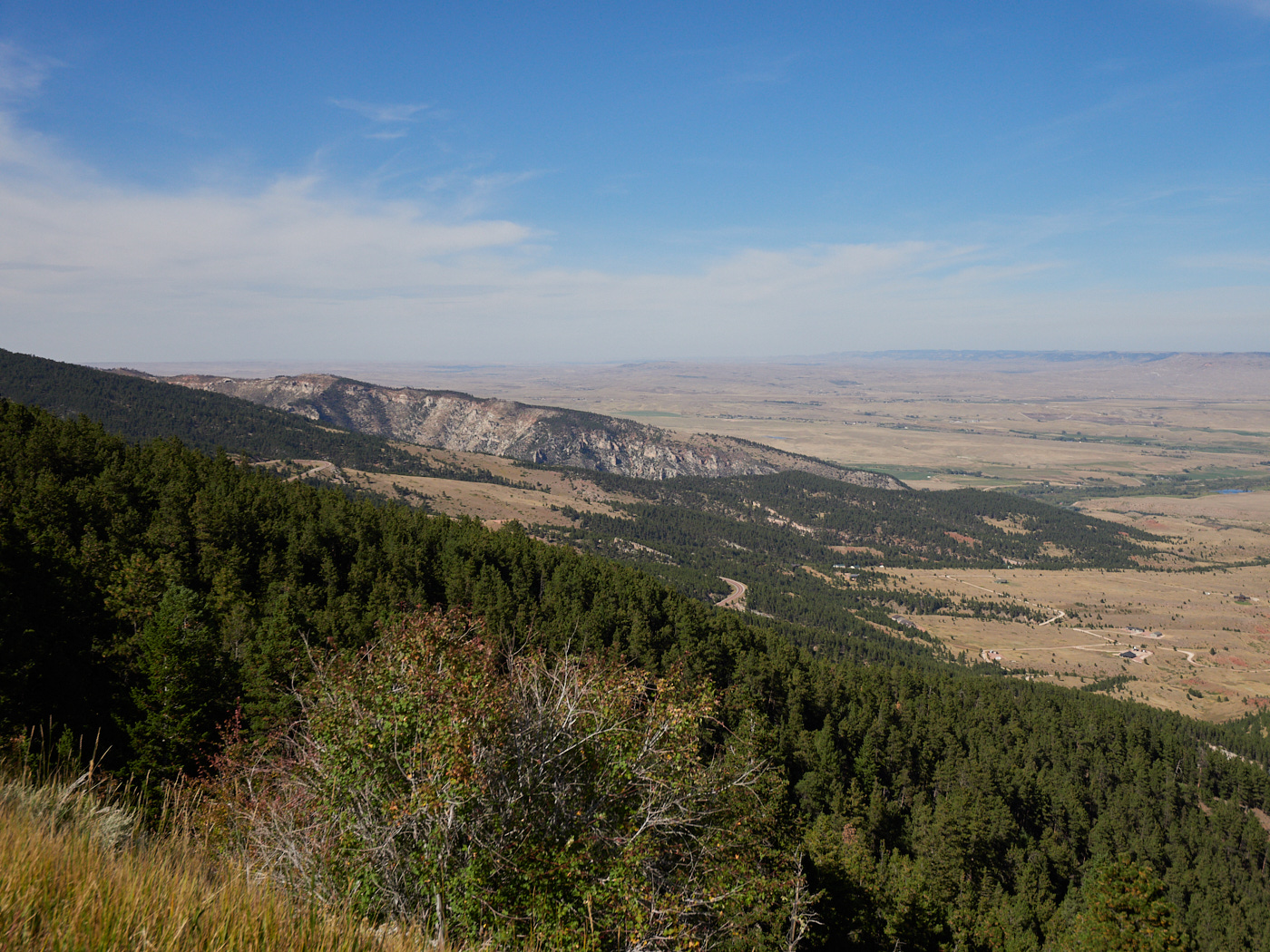 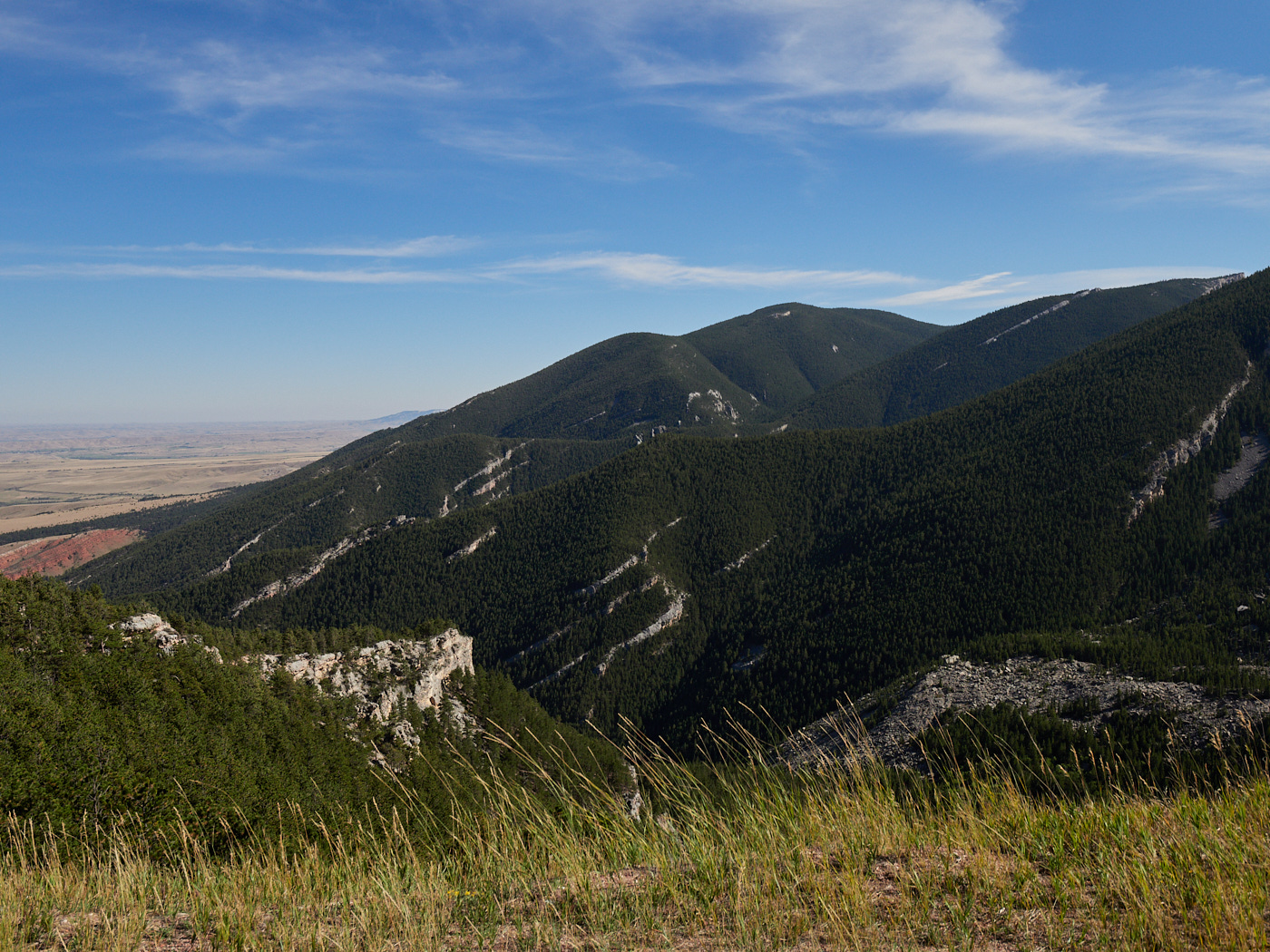 Of all the places I passed through so far, other than the Black Hills of South Dakota, the place that impressed me the most (relative to my lack of expectation) was easily the Bighorn Mountain range in Wyoming. It's big, beautiful, and... well, almost devoid of tourists. Perhaps its location: just far enough from Yellowstone not to get too much spillover traffic helps out with this.

The hike to the medicine wheel is short and easy -- it's a walk along a gravel road (closed to most motorists) that eventually brings you to the fenced sight. The only difficulty is, of course, the fact that you're at an elevation of 9642 ft. But, as long as you take it slowly, it's easy to take in the scenery. 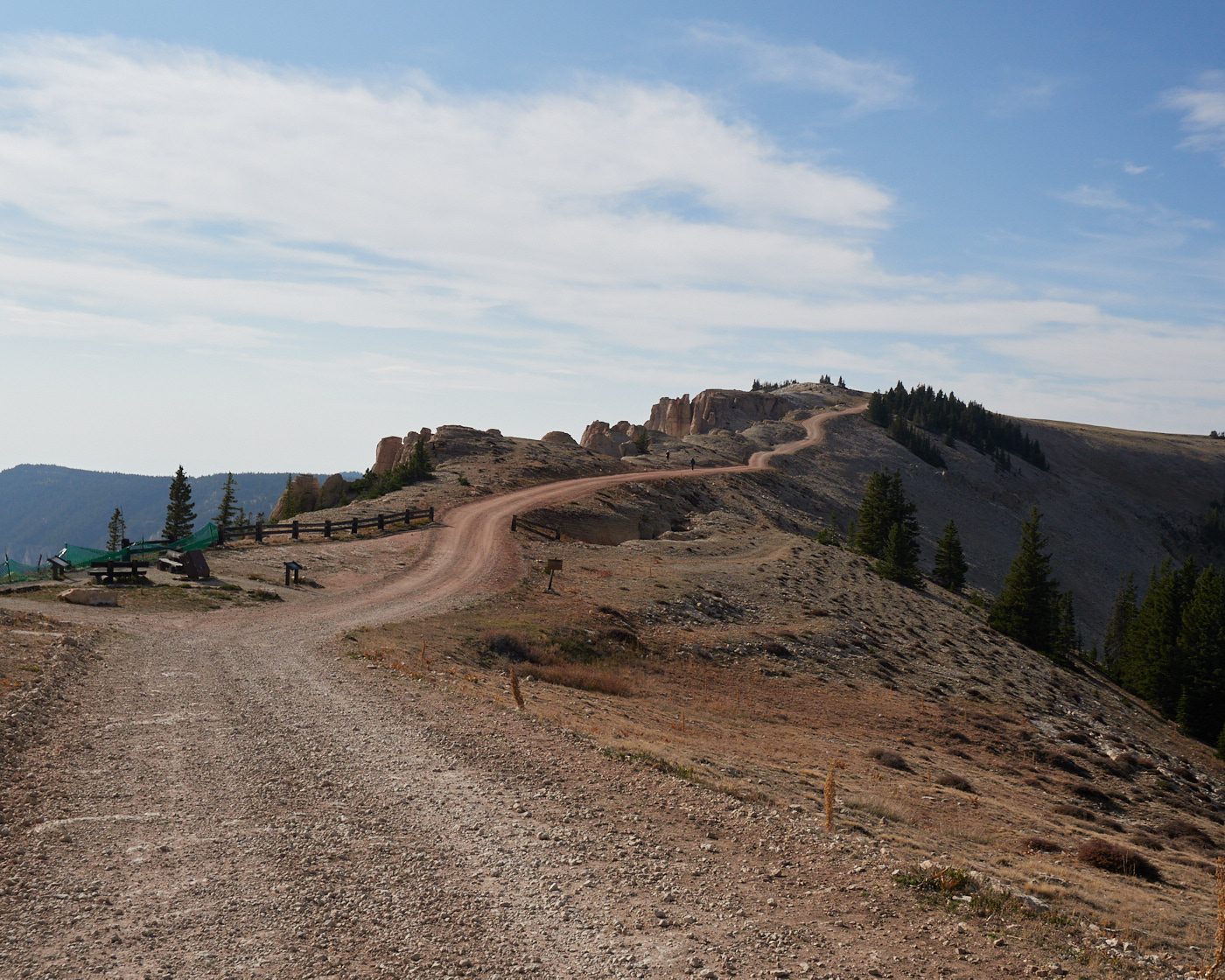 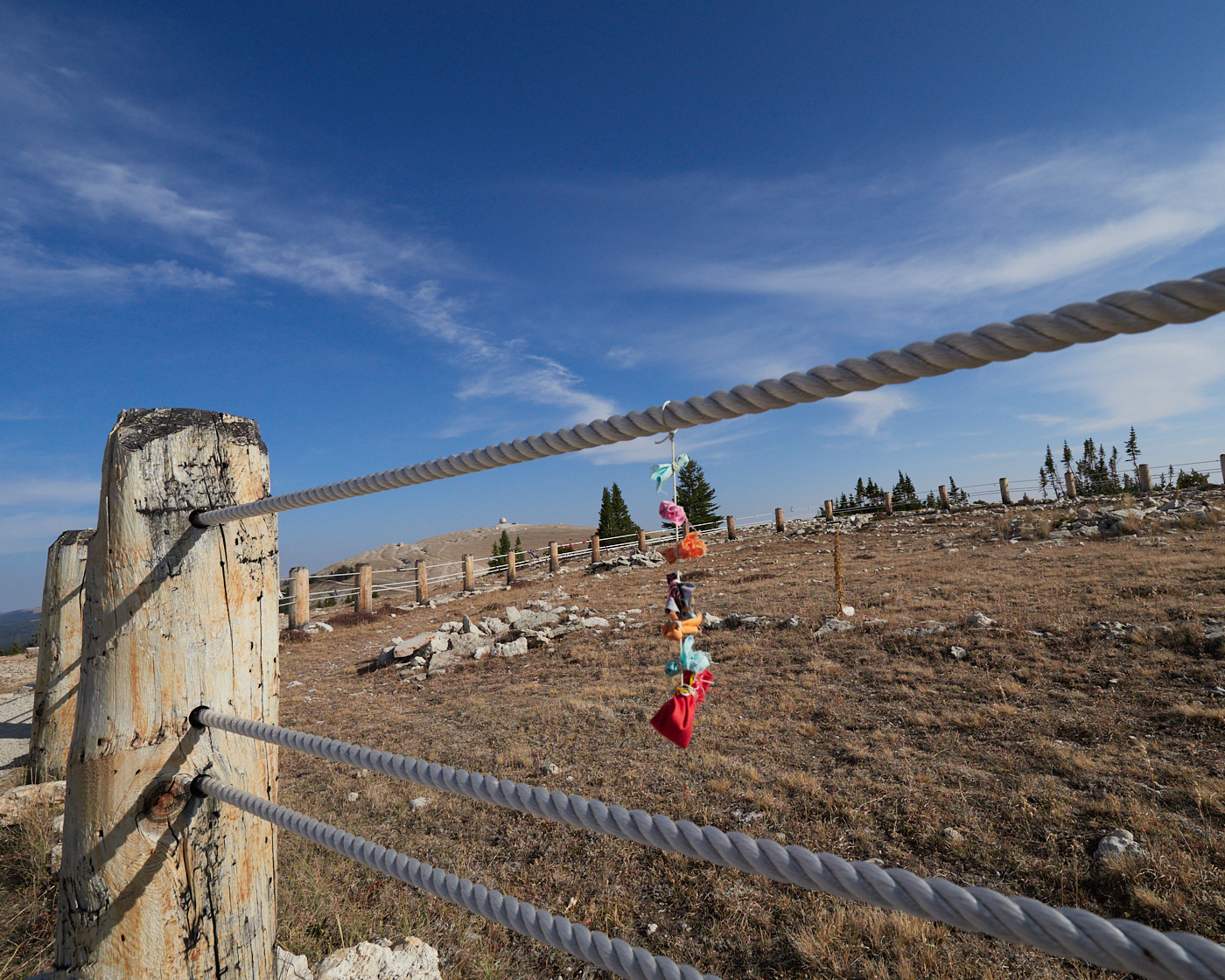 The Medicine Wheel itself is of unknown origin and age. It's sacred to a number of indigenous peoples, but none claim to have built it. It's 75 feet in diameter, and has 28 spokes. 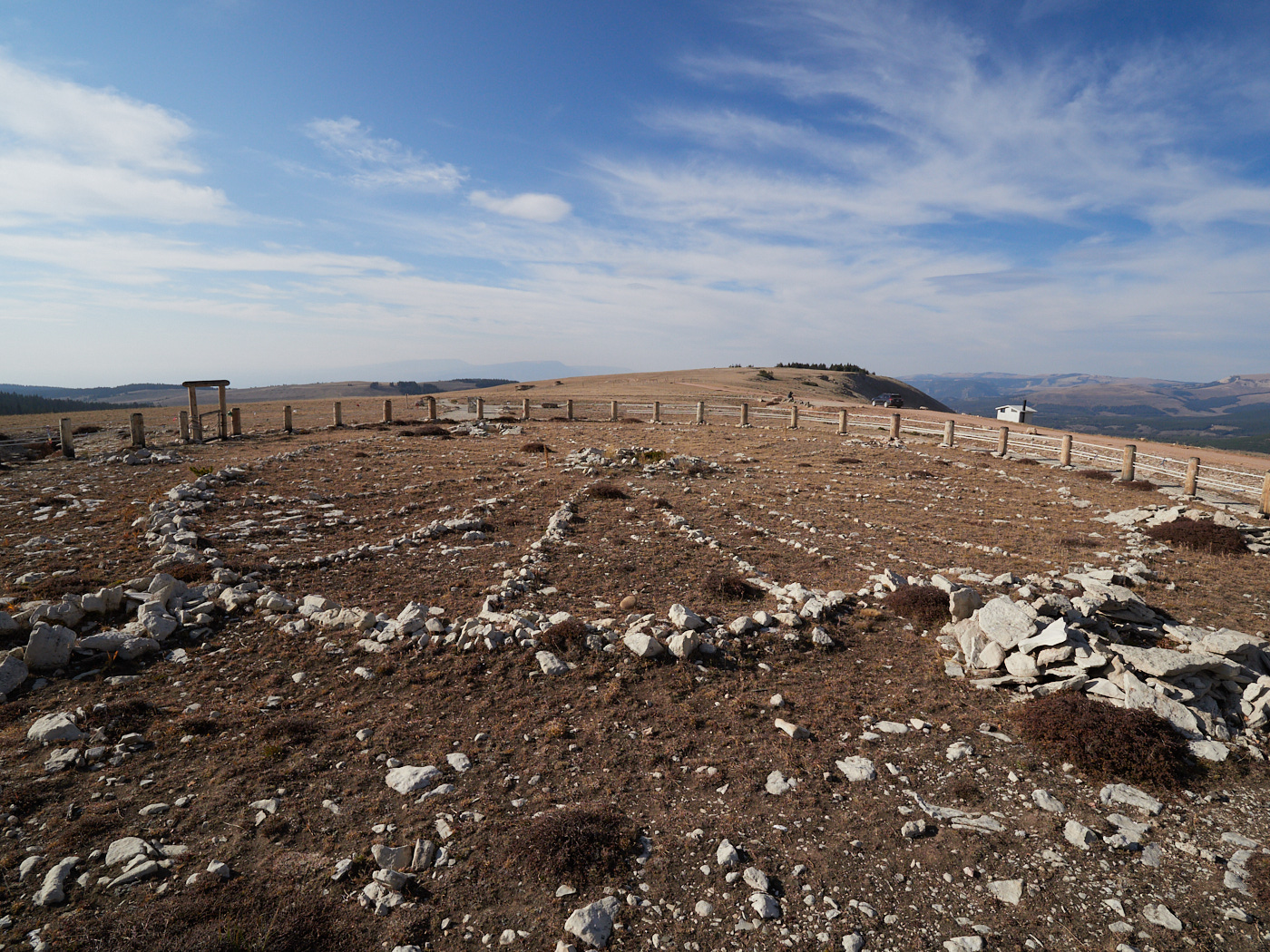 Sleep, Sleep, And Shower Too

I did pass a few primitive government campsites on the way down, but I was really hoping to check into a motel room, get a shower, and sleep in a clean bed.

I carried onto Lowell, Wyoming, where "Googley Schmoogely" told me that I could find a cheap motel.

Guess what? NO VACANCY.

I stopped by another motel that seemed fairly empty, perhaps due to the construction being carried out directly in front of it. I rang the doorbell to no avail.

It was about fifty minutes' further drive to the nearest next town, Greybull. There was a KoA there, and a brief phone call seemed to confirm that I could get hooked up with a tent site. It seemed the most reasonable prospect.

I did not want to drive for that much longer, but it was a beautiful drive past prairies and some of Wyoming's own badlands, as the sun set. I quickly checked in, demonstrated poor drowsy parking skills, erected my tent, and opted to walk into town for a hot, outdoor meal at Lisa's Western Cuisine & Spirits.

At the restaurant, I had a nice conversation with a fellow who was making a solo motorcycle trip, staying in motels. He seemed to think it absurd that I was camping, but he was more than pleased by the Wyoming weather. Dining outside was a much more palatable prospect then in his homestate of frigid Arizona.

He also highly recommended a YouTube channel from one Traveling Robert, which I'm yet to check out, but which helped inspire his own trips. Ever the egotist, I think I was thinking I could make my own vlogs about travel... which, I don't care to. 😉

At the very least, a spot of conversation, a warm shower, and some laundry machine use were a very satisfying to a long day. In total, I had probably driven for around 9 hours and 500 miles in addition to my brief hikes.

The next day, I would unwind... right?