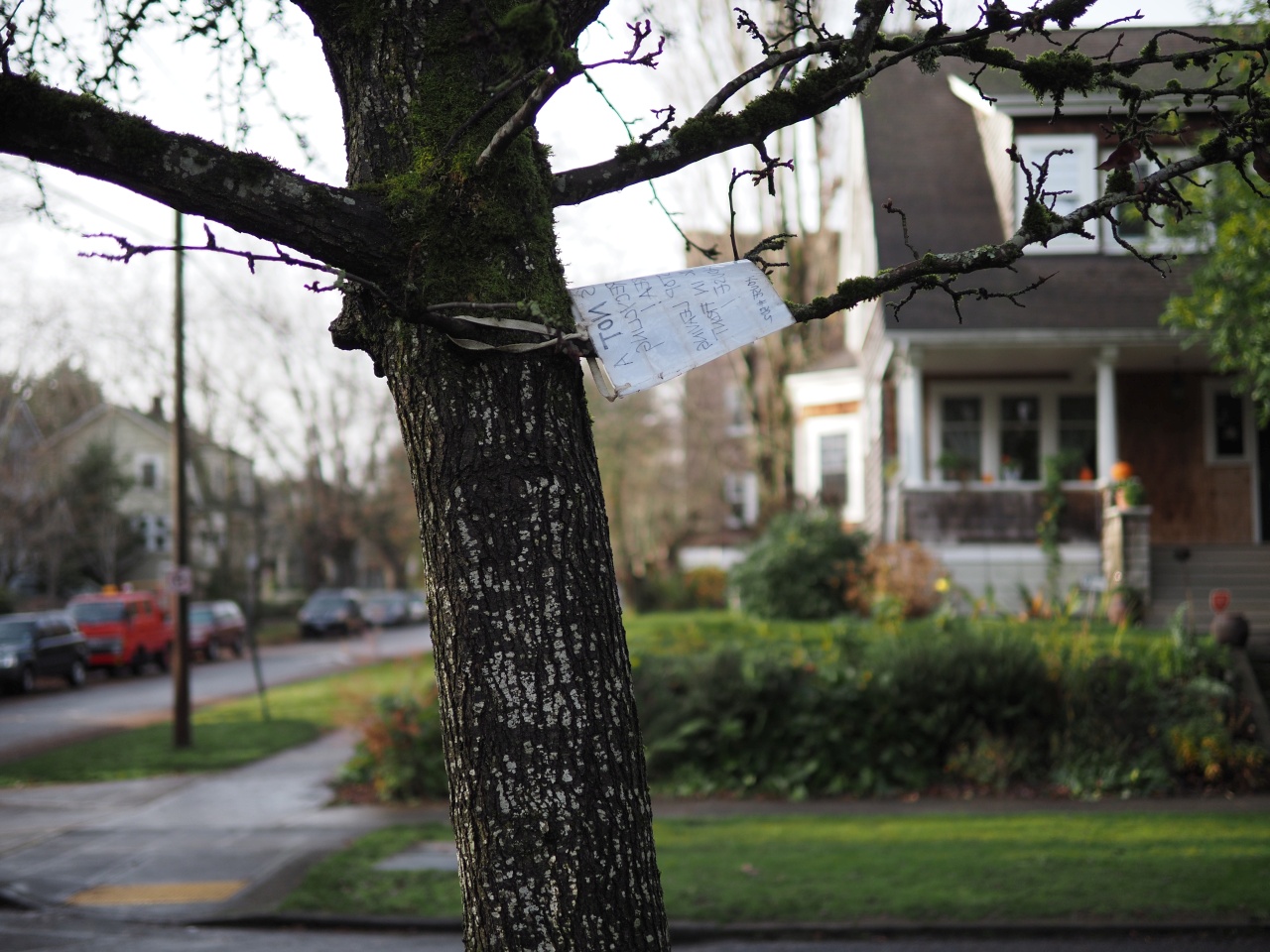 This house's “don't throw garbage here” sign is flapping in the breeze, as per usual.
×

After visiting family for Thanksgiving, I returned to Seattle.

On my first weekend back in town, I got a cheap vacuum cleaner, and I cleaned my apartment. Then, I got a coronavirus booster shot, and collapsed into lethargy.

Since then, I've been bouncing around, seeing people and doing stuff, or alternatively, getting my blog closer to some semblance of updated or completed. Oh, heck, I also did some baking too.

I've also been very much enjoying some of the quieter pre-holiday workdays, and have been taking advantage of some flexibility in order to catch a bit of sunlight... and yes, some ducks.

This then is a hodgepodge of topics and events... and even then, I'm leaving out a solid half of my photographs. 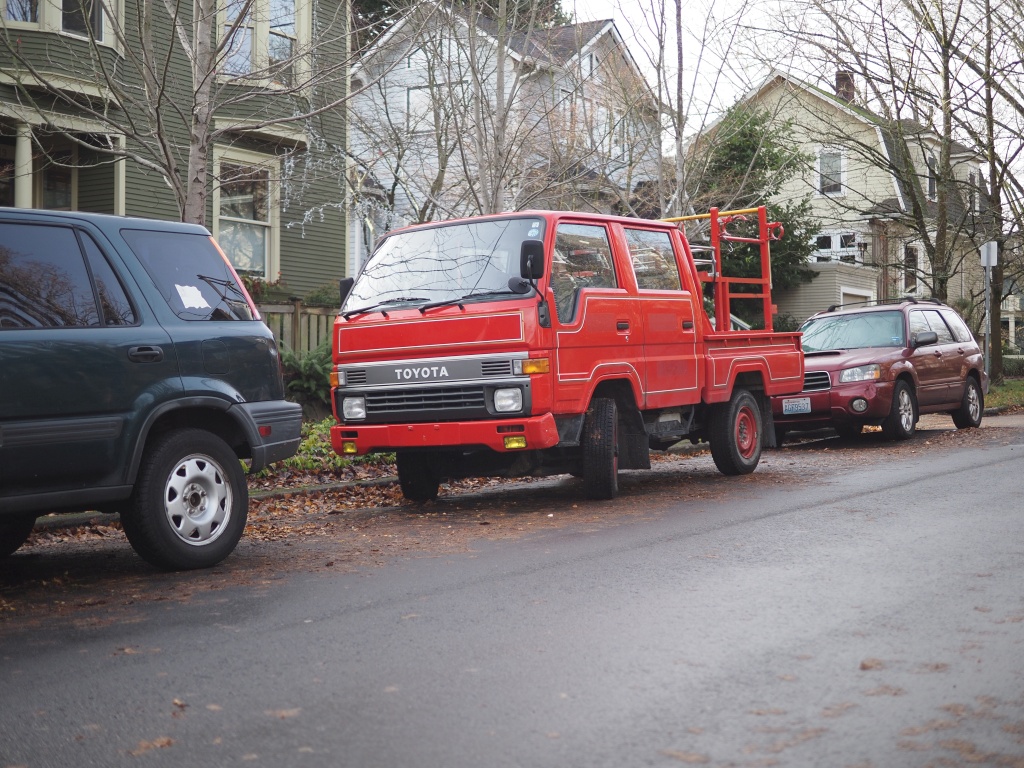 A Japanese-styled truck I often see parked around Capitol Hill. Bonus points for figuring where this was shot with relation to the last photo...
×
This element did not display properly. Do you have JavaScript enabled?

Boost Me Up, Scotty 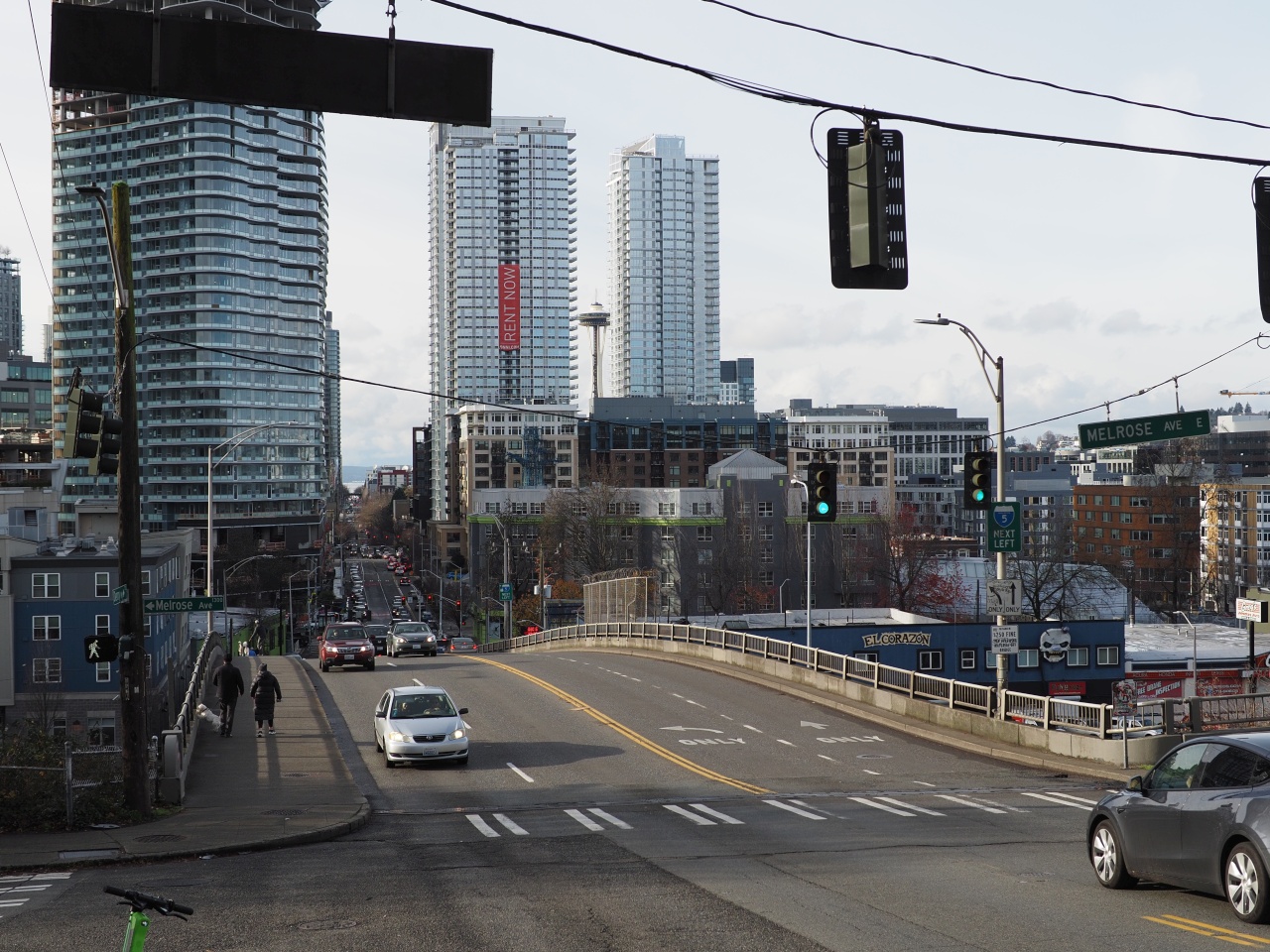 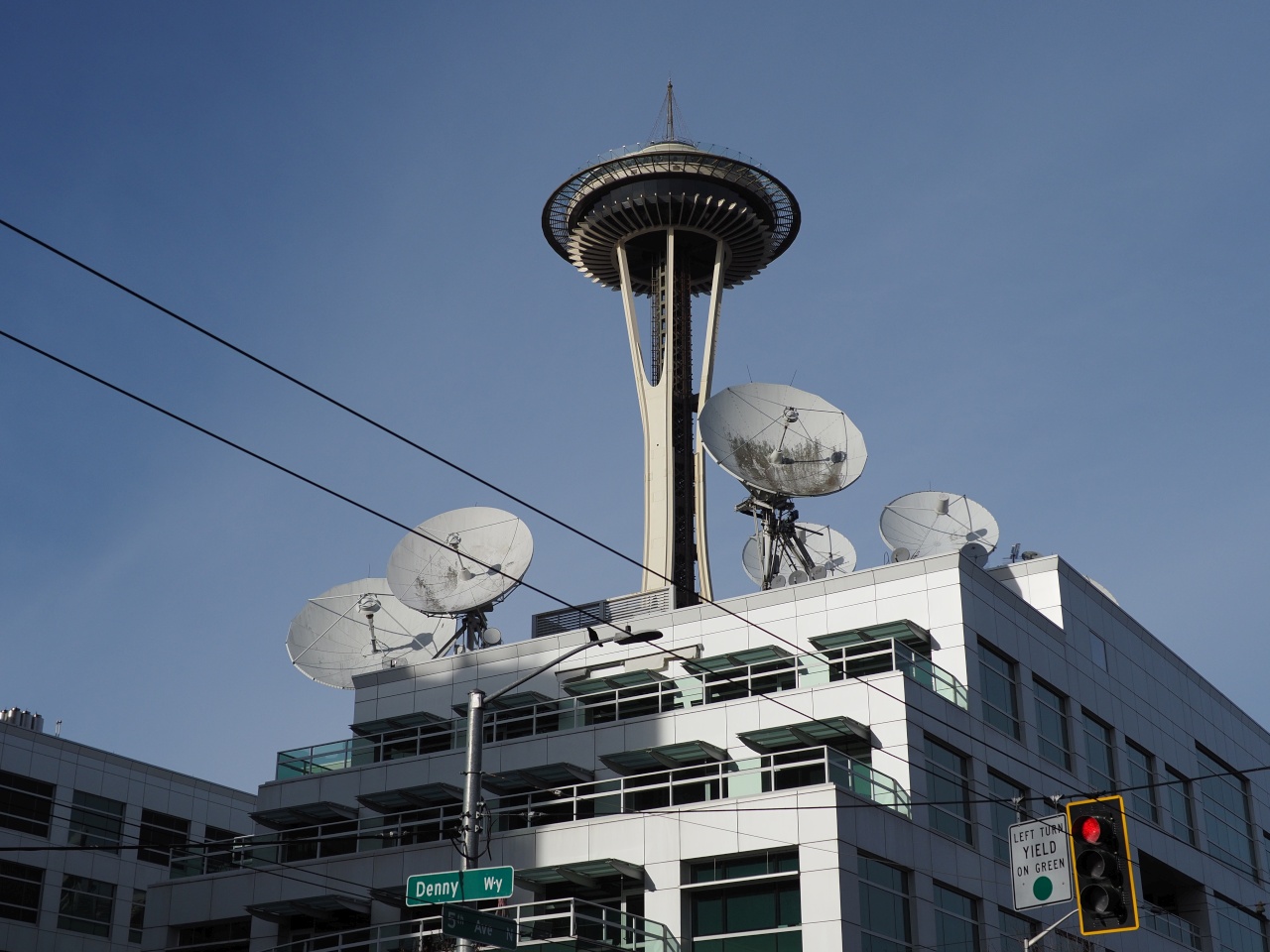 The Space Needle is a remarkable building.

You can photograph it from virtually any angle, and it will look the same.

I took some Space Needle photographs on a long day's walk before I went to get my COVID shot, and now that I've looked at them, I don't know that I'm that interested in taking any photos of it anymore. 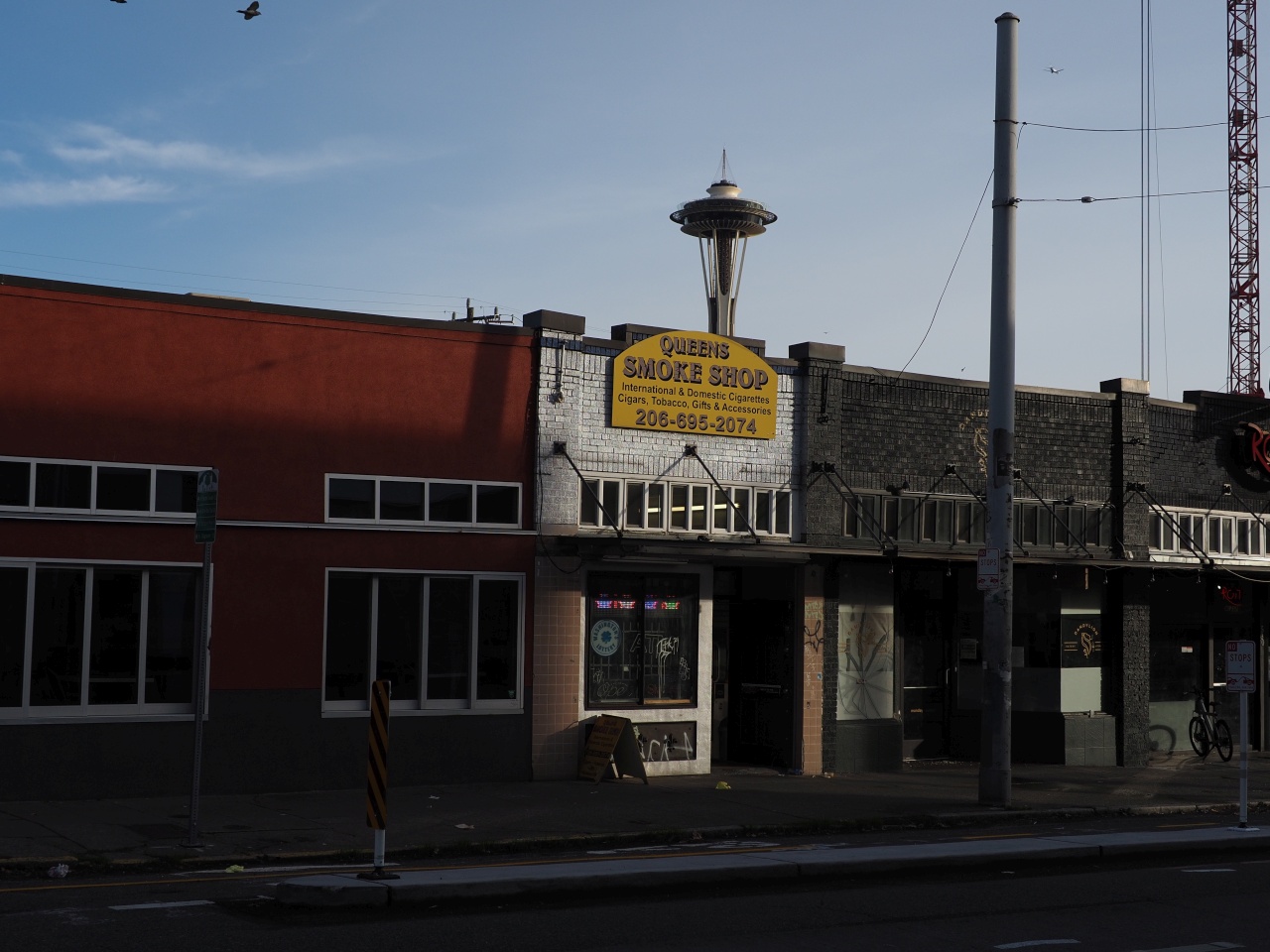 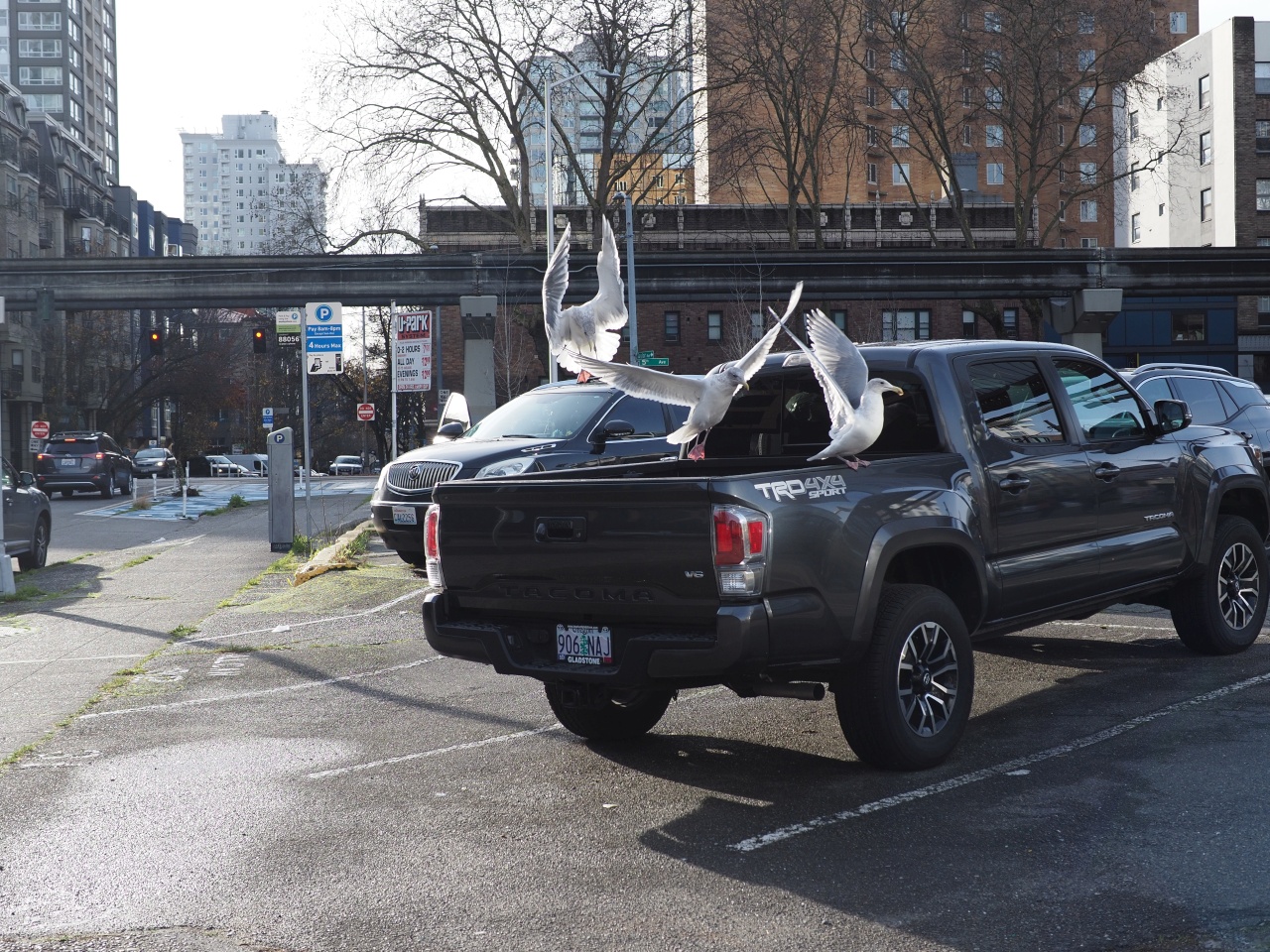 I also wandered past some seabirds hanging out in someone's truck, had some decent Korean food, and picked up a couple of records. I simply cannot pass up good, cheap jazz fusion, and I am delighted that I now have a bit of Mahavishnu Orchestra and Al DiMeola for whenever I want my kind of guitar pyrotechnics. 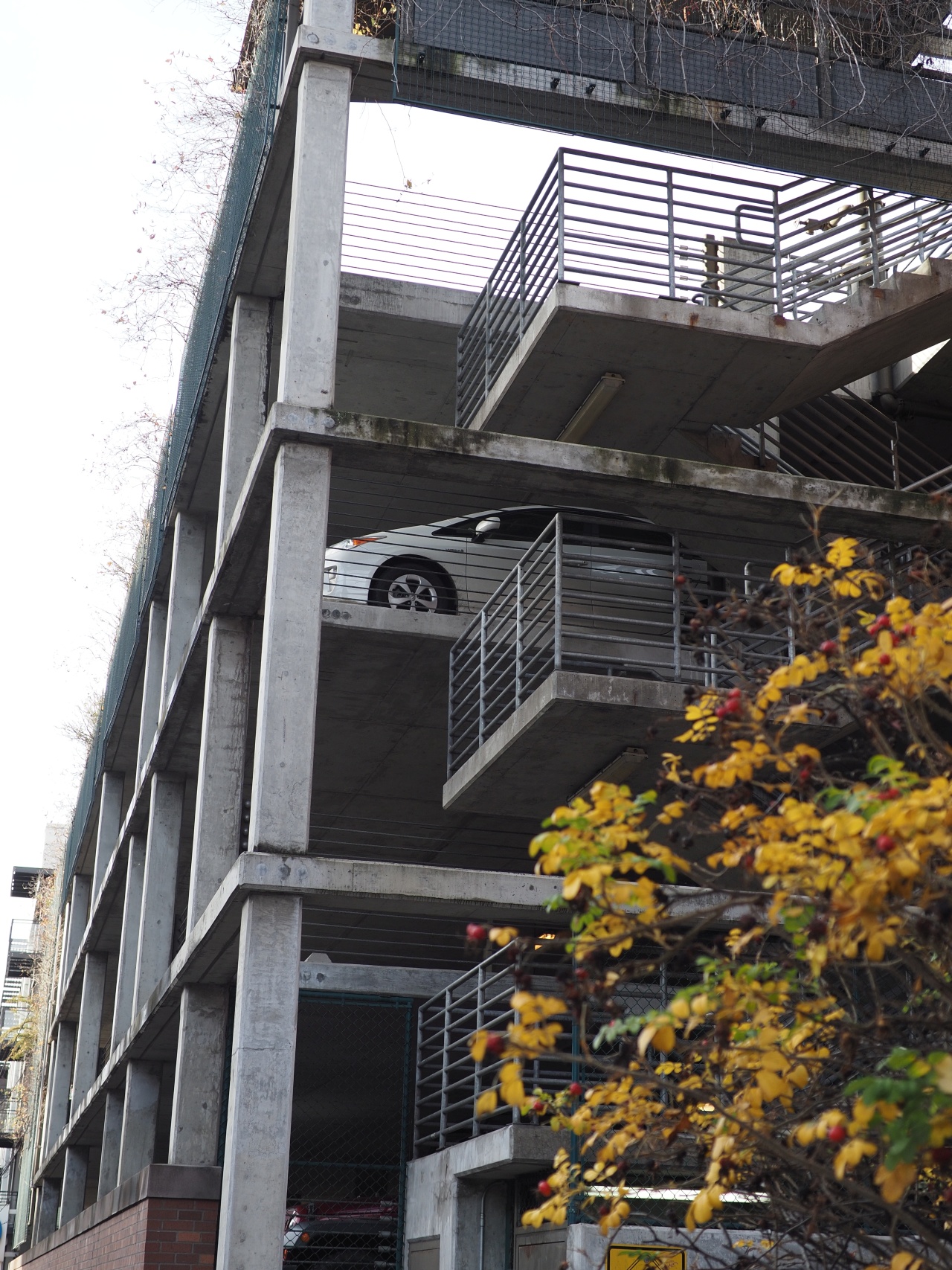 I managed to somehow accidentally recreate the precise walk from a former colleague's favorite hotel (the Holiday Inn, with its free breakfast vouchers), to the corporate meeting center, now repurposed as a mass vaccination site.

(Frankly, this particular stretch was a walk I could have done without repeating.)

They were taking walk-ins, but because I had an appointment, I was able to skip part of the line-waiting. I got a colored wristband which indicated my vaccine type, and was herded up and down various hallways and staircases by a plethora of workers.

Not too long afterwards, I got the jab, got my white card updated, and I was back outside.

I felt a little tired, so I hopped public transit home.

My reaction wasn't severe. Just fatigue, lethargy, a desire to sleep all day... And, a few feverish dreams.

In one of them, in the middle of the night, I was running down a hill. As I ran, my teeth were rattling in my mouth, and I felt like they must be clenched, or about to fall out. It didn't feel right.

I became aware that I was asleep and decided I needed to wake up, to figure out what was going on. But, I couldn't move. I was somewhere between sleeping and waking, immersed in sounds and imagery, and I started to panic a little.

In this moment, I felt as though I had imbibed hallucinogen, or maybe just a bit like a character in a Philip K. Dick novel. I realized that I was stuck in my situation, and that panicking would only make it deeply unpleasant. I accepted my lot and calmed myself.

And, the sounds and imagery calmed themselves too.

Not too much later, I was able to roll over and pick up my phone. I was thinking I needed to call for medical attention or something. But, no. My phone wasn't working. It was just flashing images.

Ah, this must be what my brain thinks my phone does, I realized. Pretty accurate.

With a bit more effort, I actually roused myself.

My teeth were fine.

It was the middle of the night.

And after I calmed myself some more, I went back to sleep.

It's natural that vaccines combined with our own fatigue help lead to fever dreams, and sleep paralysis isn't an uncommon phenomena. It's rare, though, that I find myself between the sleeping and the waking. It isn't something I would necessarily seek out, but with a calm mindset, it's really not so bad.

Not long after that restless rest, my vaccine symptoms wore off, and I was back to business.

Work, and also... working in the kitchen?

Only my most astute followers (a.k.a. only the algorithms, not the humans) know I they've been reading the blog Whisk Kid since 2009 or so.

In the early days, the combination of recipes, photography, and personal anecdotes made for a compelling read, one that helped influence my conception of what a blog could and should be.

Though I have to admit that I only attempted to (and succeeded at) replicating the recipe for that rainbow cake that went viral in 2009 before I was once again unceremoniously banned from my family's kitchen.

The charge? Making too much of a mess.
The verdict? Definitely guilty.

Her recipe for one bowl masala chai blondies immediately caught my eye.

You see, I like blondies. I don't think I ever had them growing up, but when I spent two years living with Slayback, he used to make them occasionally and they were delicious.

I also love tea, including masala chai. The thought of combining the two, and the thought of the recipe taking only... "one bowl" was intoxicating...

But, I had to go grocery shopping first.

I decided to visit Grocery Outlet for the first time. There I found pretty good deals on tangerine-flavored sparkling water, pre-sliced provolone cheese, and... no brown sugar for sale whatsoever.

After a bit more driving, I arrived at a Seattle staple, Uwajimaya's flagship store in the International District.

And so, I bought some Dark Muscovado, though I knew full well while I was doing so that I might be changing the color from blonde to brunette. At $6/lb I had hoped that the sugar would be as lovely as the package said it was.

Let me tell you, I opened it and had a taste, and I absolutely must say it is. My sweet tooth does not go so far as to tell me that I should eat pure sugar. But that Dark Muscovado was so tasty on its own that I knew combining it with the other ingredients would lead to something special.

I made a few other changes to the recipe, substituting ghee for butter, and a 7x11 pan for an 8x8 pan. Owing to the increase in surface area, I decreased the baking time by about five minutes.

Also, I forgot to buy vanilla extract, and was bailed out by Chelsea who had come over to play Mario Kart, and thus became my first taste-tester.

I think the tea flavor didn't really come through in my resulting bake, and the cinnamon and ginger were the most present spices. Combined with the dark muscovado, the brunetties had almost a gingerbread flavor, while retaining a bit of a spiced edge.

In short, they became a perfect holiday treat.

I brought most of them to work in order to keep myself from eating them all.

This is why you should always bake for an audience.

Plans for hikes got curtailed by hot chocolate, headaches, and the need to get holes drilled in my front bumper to mount a new Washington license plate. (Maybe I will elaborate later...)

But in the meantime, I have plenty of reason to go over to Volunteer Park & practice bird photography on the local flock of ducks.

Bird photography is a tricky endeavor, and it's harder when there's overcast skies and limited light. 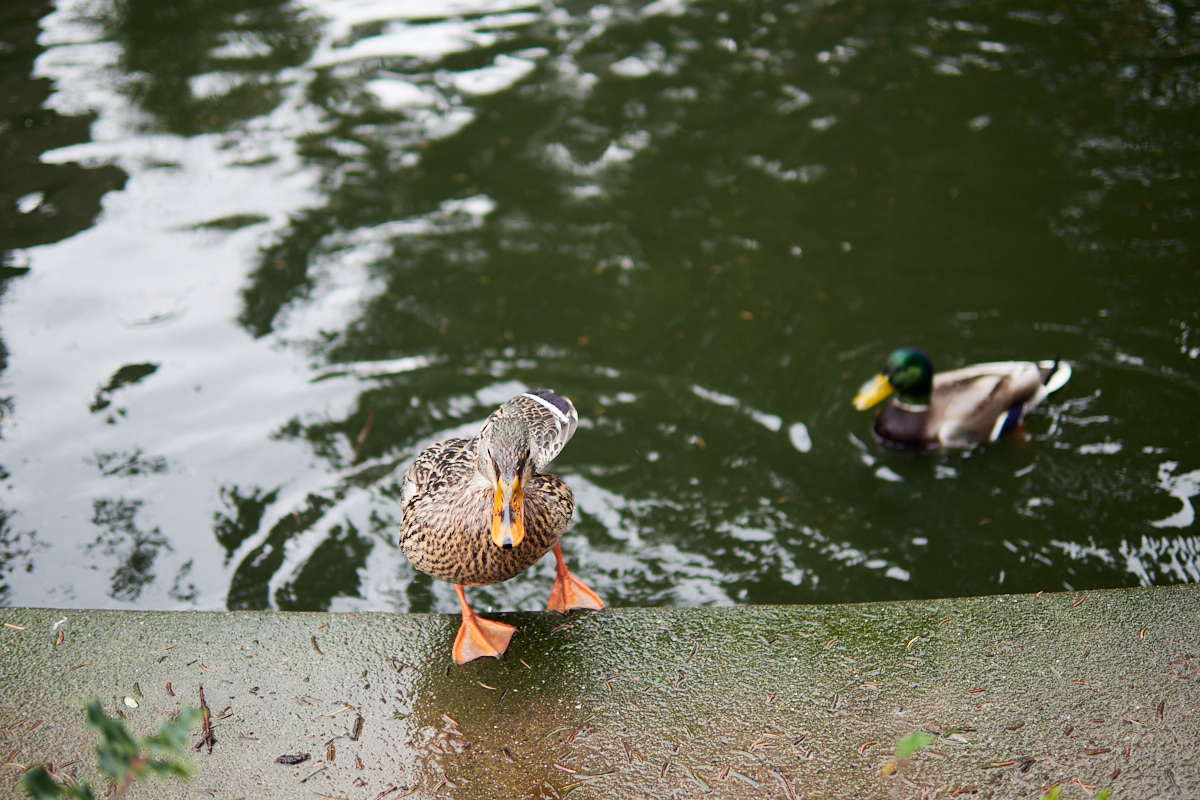 It's harder when the subject doesn't do much of anything interesting.

You want there to be some character. A reason your duck photograph stands out. 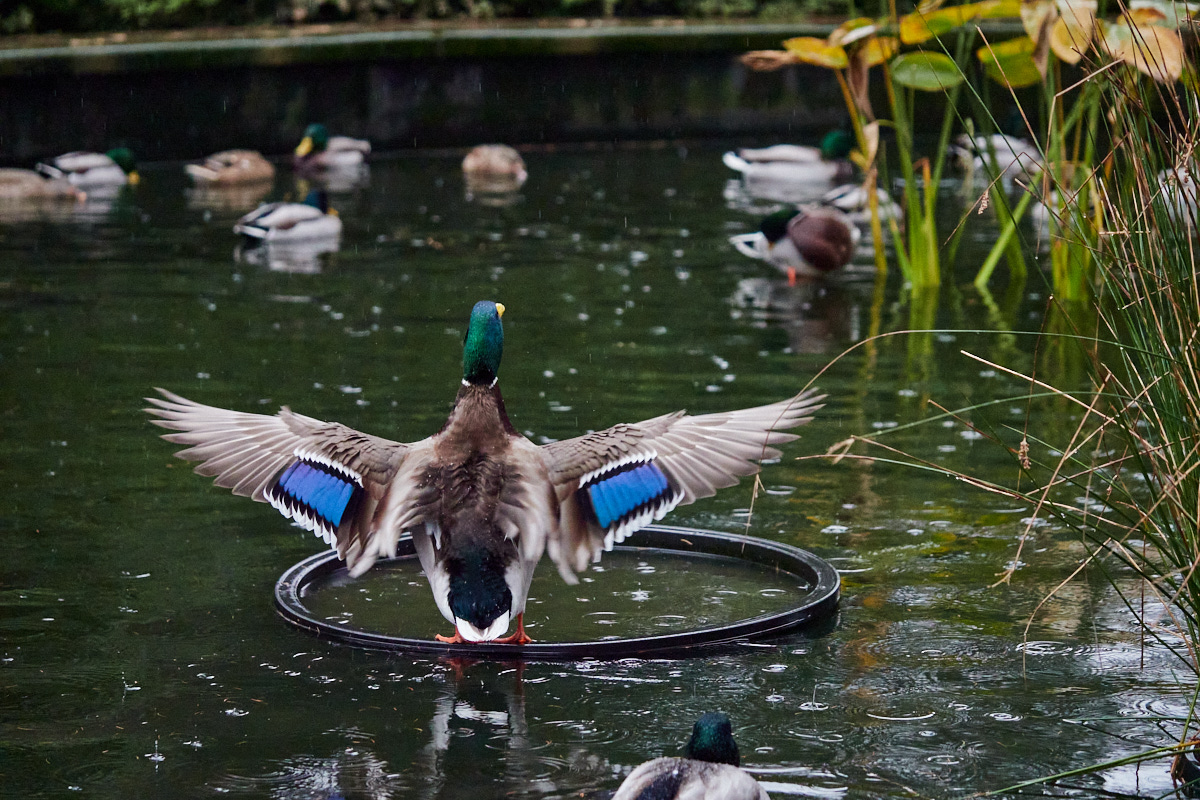 It's harder when the subject does something interesting.

Wings flap ridiculously quickly, and detail can become a blur if shutter speeds and autofocus don't keep up with the subject.

I don't know that any of these duck images are new personal favorites of mine. Maybe with a bit of editing they could be, but as is, no.

But, I enjoyed taking them, and continuing to better learn how to use my camera in the first place. 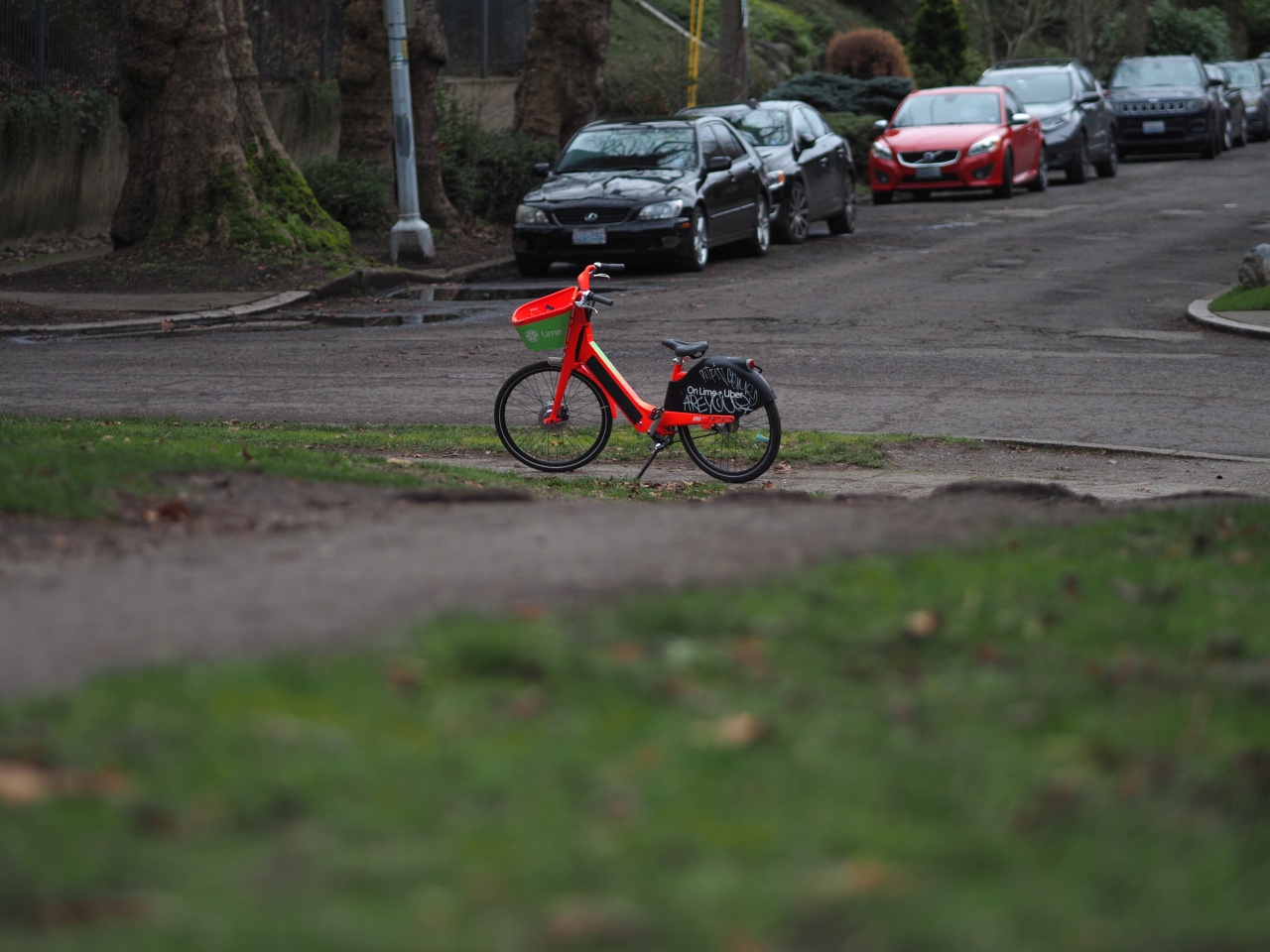 And there you go, that gets me through most of December... so far.