Last weekend I decided to go on a stroll and check out some of the “beaches” along the shores of Lake Washington in Eastern Seattle.

We'll get there in a bit, but first, excuse me whilst I soapbox. (After all, I'm posting this on Black Friday, and I can't think of a better day to complain about politics...)

Like the United States and its West Coast cities in particular, Seattle is a microcosm of inequity. On the one hand, you have a lot of extremely rich people living in the area, including a couple of current/former wealthiest people alive. *Cough cough* Jeff, Bill, Etc.

On the other hand, you have a large homeless population, who are routinely dehumanized and criminalized. And, a lot of people in between struggle with the cost of living, which is bumped up by the population of highly paid tech workers.

Seattle does have a reputation for being left-wing, but in certain ways it very much isn't. Generally Democrat, yes, but not leftist. The 2021 election results illustrate this starkly. Democrats won almost every (non-partisan) office, but the chosen candidates were those with a pro-business streak, and without too many radical ideals. 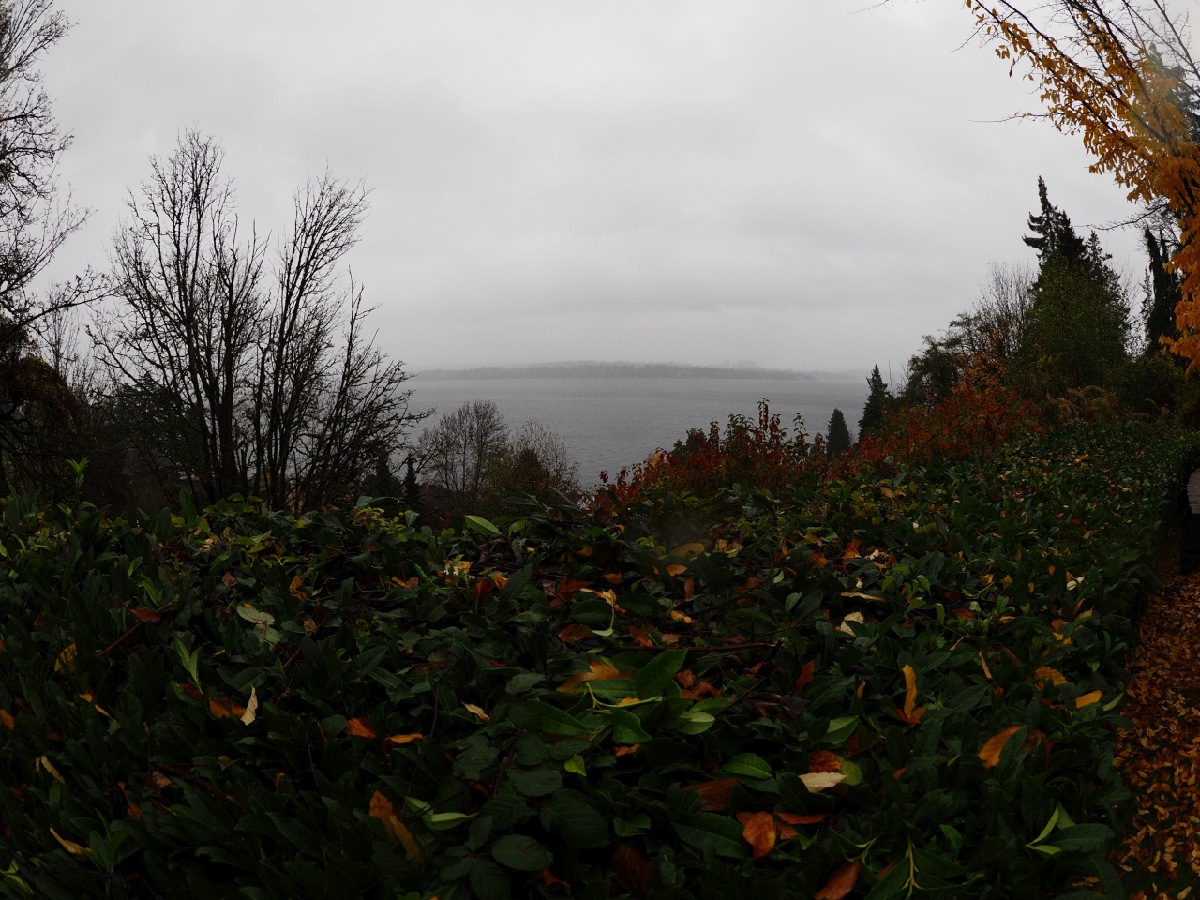 Hills and vegetation, and Lake Washington in the background...
×

For residents of Seattle's District 3, the elections aren't over yet. An effort to recall city council member Kshama Sawant is going to ballot on a special election on December 7th.

You may wonder why this didn't go to ballot on Election Day. Strangely, despite Sawant supporters' attempts to collect additional signatures in support of the recall (including Sawant's own signature), recall campaign organizers somehow missed the deadline to have the question posed on the general election ballot. Thus, there is a surprise election between Thanksgiving and Christmas, a month after Election Day. Certainly not a recipe for high turnout.

The charges for the recall? Using city resources to promote a ballot initiative ("Tax Amazon") without public disclosure, letting protestors into city hall, and ostensibly leading a protest march to Mayor Durkan's residence. The recall is being held without any verification of the charges, and if the "No" vote succeeds, the Sawant will be removed from city council.

Sawant, meanwhile, helped push through the first $15 minimum wage in the U.S., support initiatives that involve taxing Amazon, or say... calling out shoddy landlords. She's a rare far-left council member with what critics call “utter disregard for the city’s business community”, which is exactly why I certainly support "no" on this recall...

I mention these things not just to soapbox, but because they're relevant to today's little photo walk. 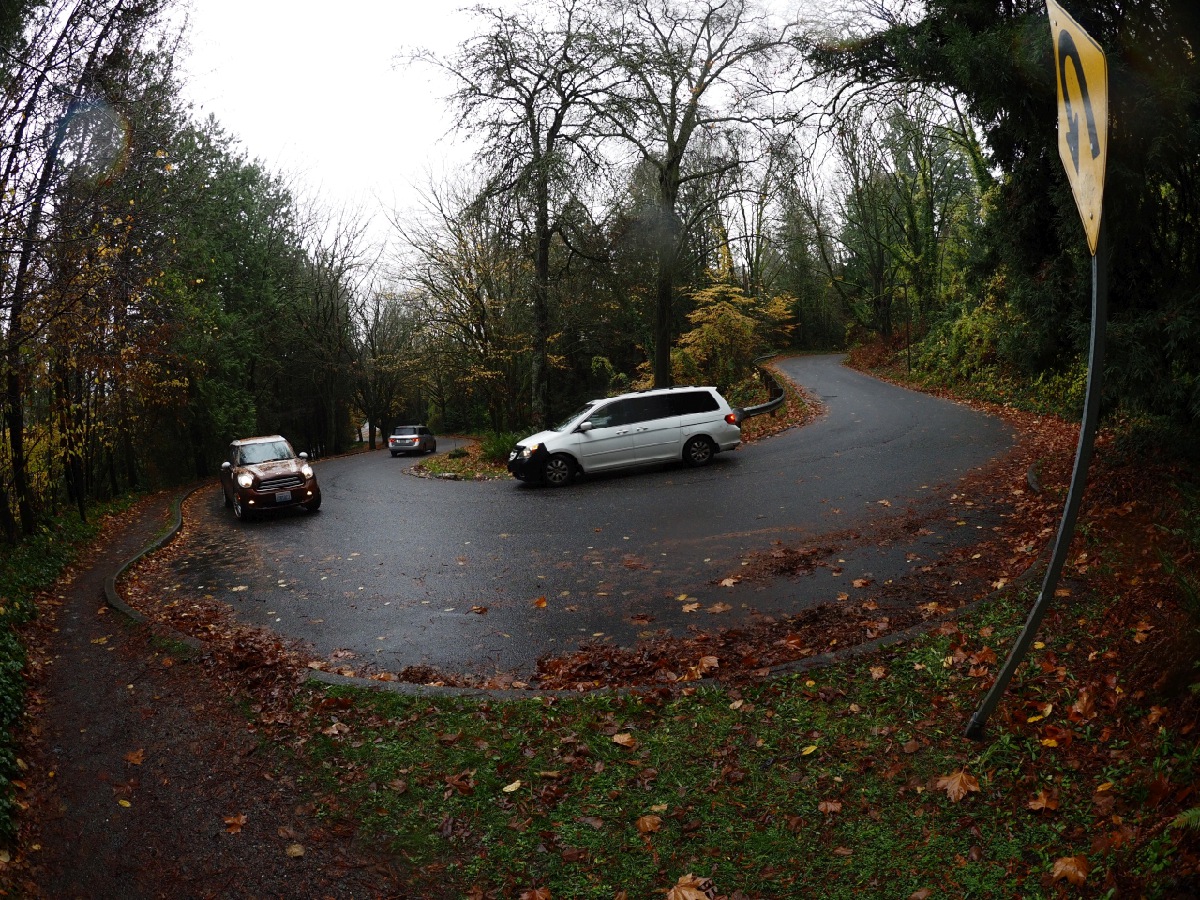 Sure is a great sidewalk they have on this perfectly standard Seattle road.
×

To get to Lake Washington from my apartment, I crossed through the Madison Valley neighborhood, then descended into the neighborhood of Denny-Blaine/Harrison, passing a private school whose tuition fees exceed the median American's annual income.

As I wandered nearer to the lake, the number of ginormous houses and fences increased exponentially.

Depending on the house, I either felt like I had been absorbed into Zark Muckleberg's Metaverse and got trapped on the McMansion Hell feed, or like I was looking at the outside of the rich family's house from Parasite.

I will admit that when I saw a fake renaissance house with giant bulging turrets, or a brick colonial that looked oh so historical, except for being four times the size of a normal house and somehow having a two car garage built in... I couldn't help but chortle a bit to myself. 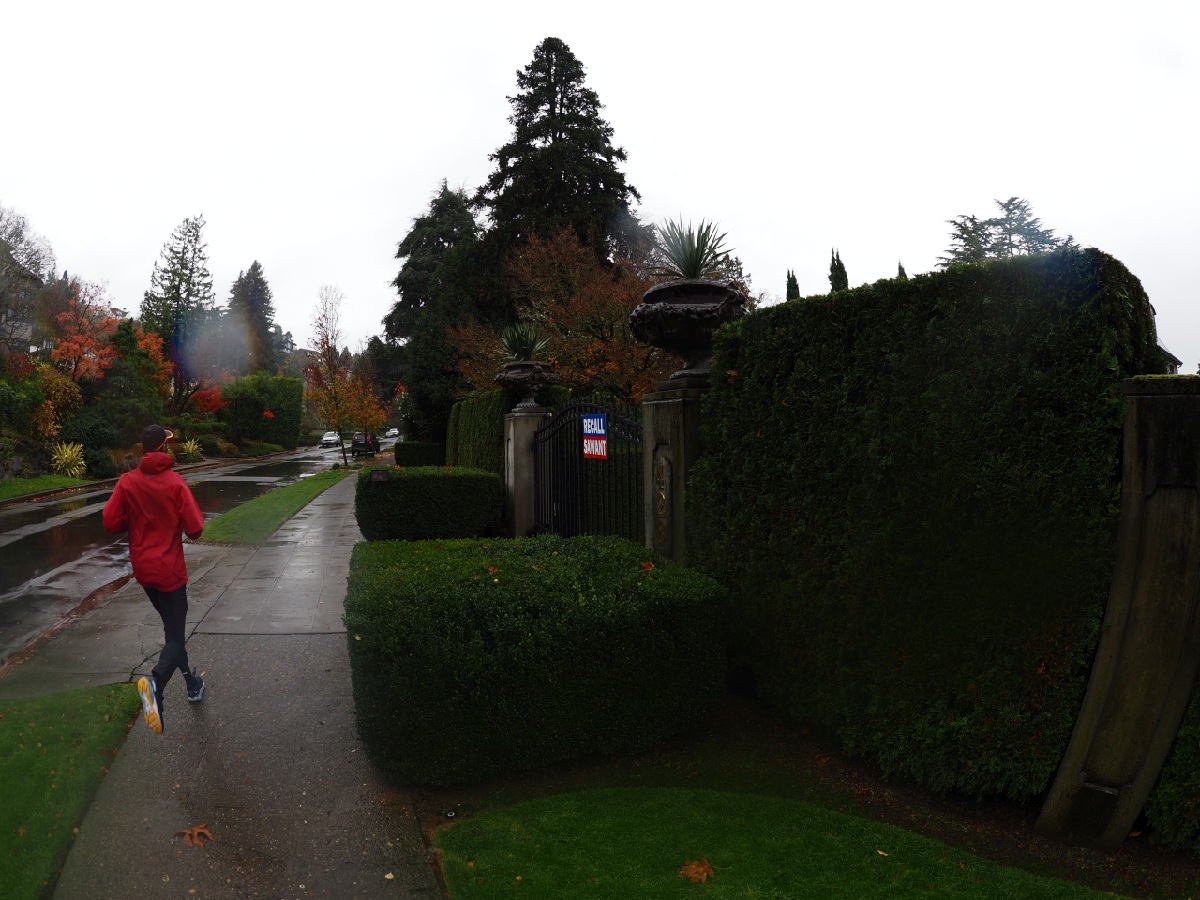 The more Parasite-esque houses tended to have giant walls of huge windows looking out upon the lake. Some of them had giant flat-walled windows in the front of the house too, which meant that to an outsider like myself, the living room furniture (and the people sitting on it) looked like a laboratory specimen, illuminated between two pieces of glass for prying outside eyes.

I didn't walk around snapping photos of these houses, because I'm not a voyeur or someone that wants to incur the wrath of the numerous security companies whose signs litter the road. After all, by definition a fortress must be fortified. 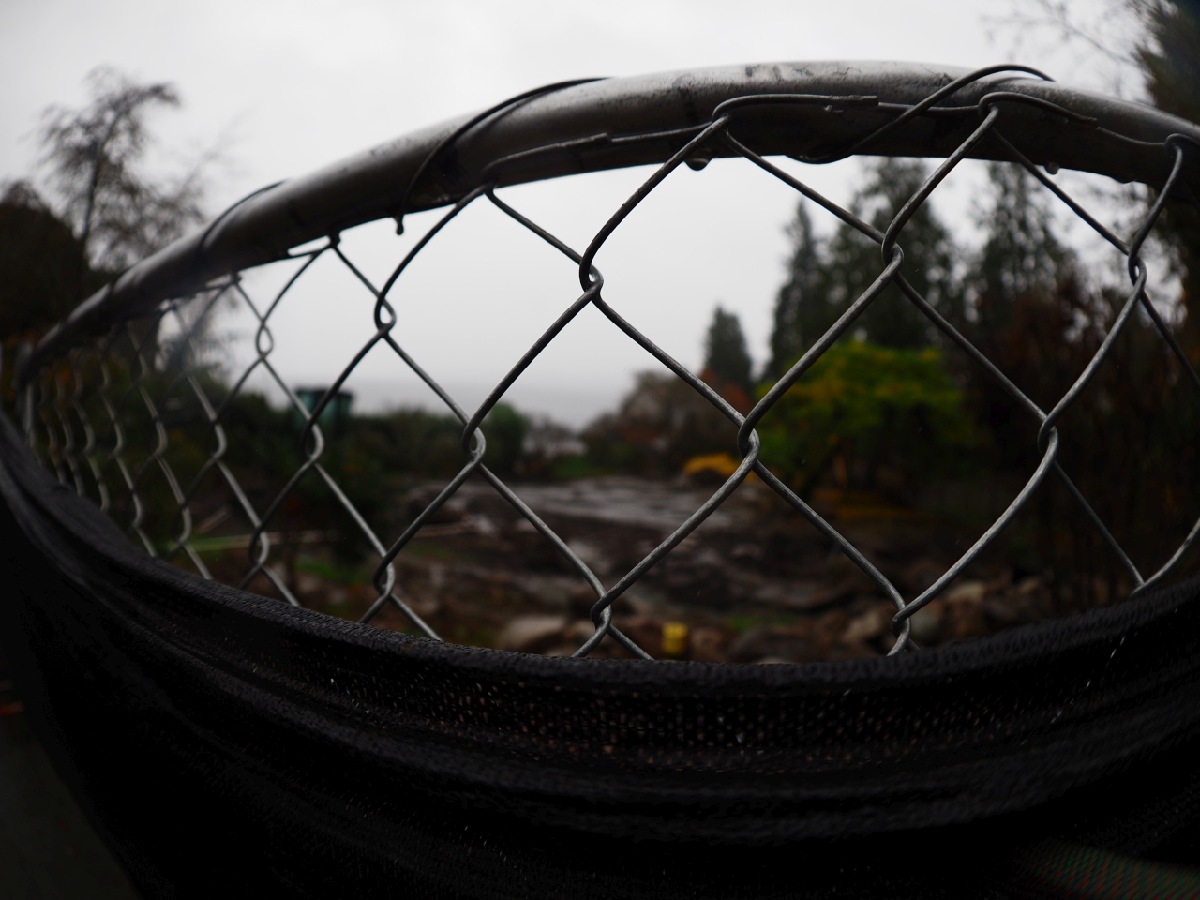 So once we walk past fence after fence (most of which are just short enough to allow my 6'3 self a lovely view), we eventually reach some “beach access points.” 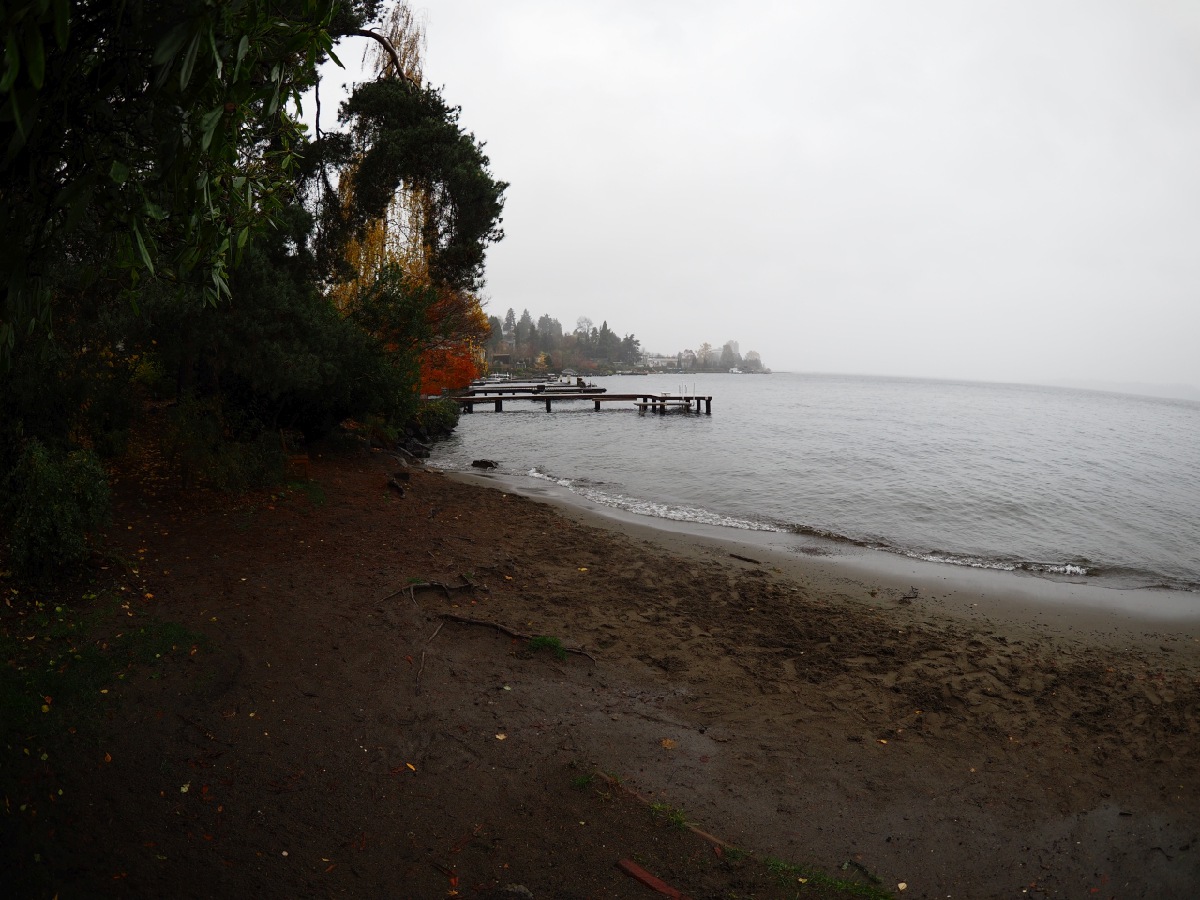 These are shown on Google Maps as if they are public parks. And, indeed they are. Of a sort.

The first one I visited was a lackluster patch of sand. The path to it was so poorly marked I wasn't sure whether I was about to accidentally trespass onto some mansion's front lawn, or down another mansion's driveway. 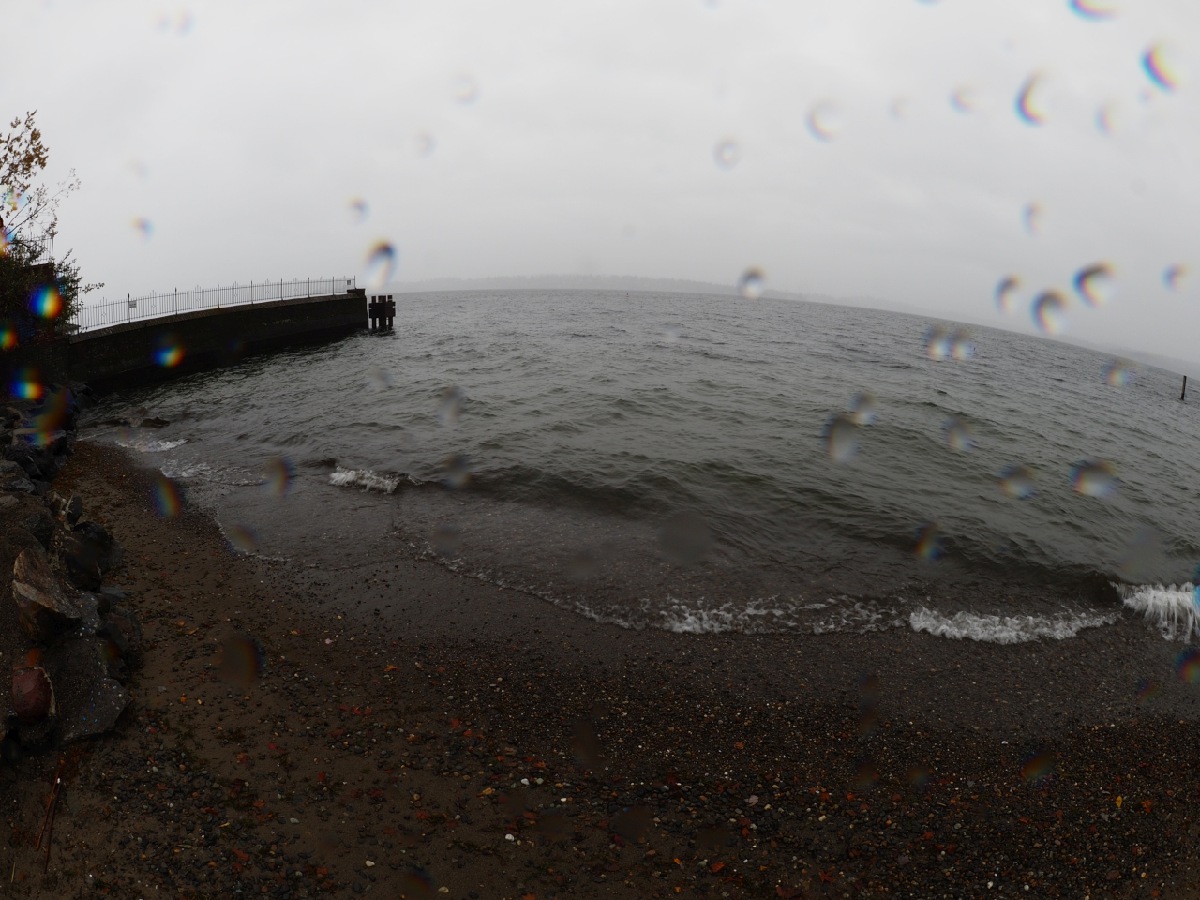 Instead, I found a narrow strip between fenced walls, where a couple of wooden chairs were left set up. This beach access was public, but I guess it was private enough.

The nearby Denny-Blaine park is larger and boasts a parking lot, but is similarly unexciting, with its excellent view of walled off piers with "NO TRESPASSING" signs. I did like the recycling bin graffiti though. 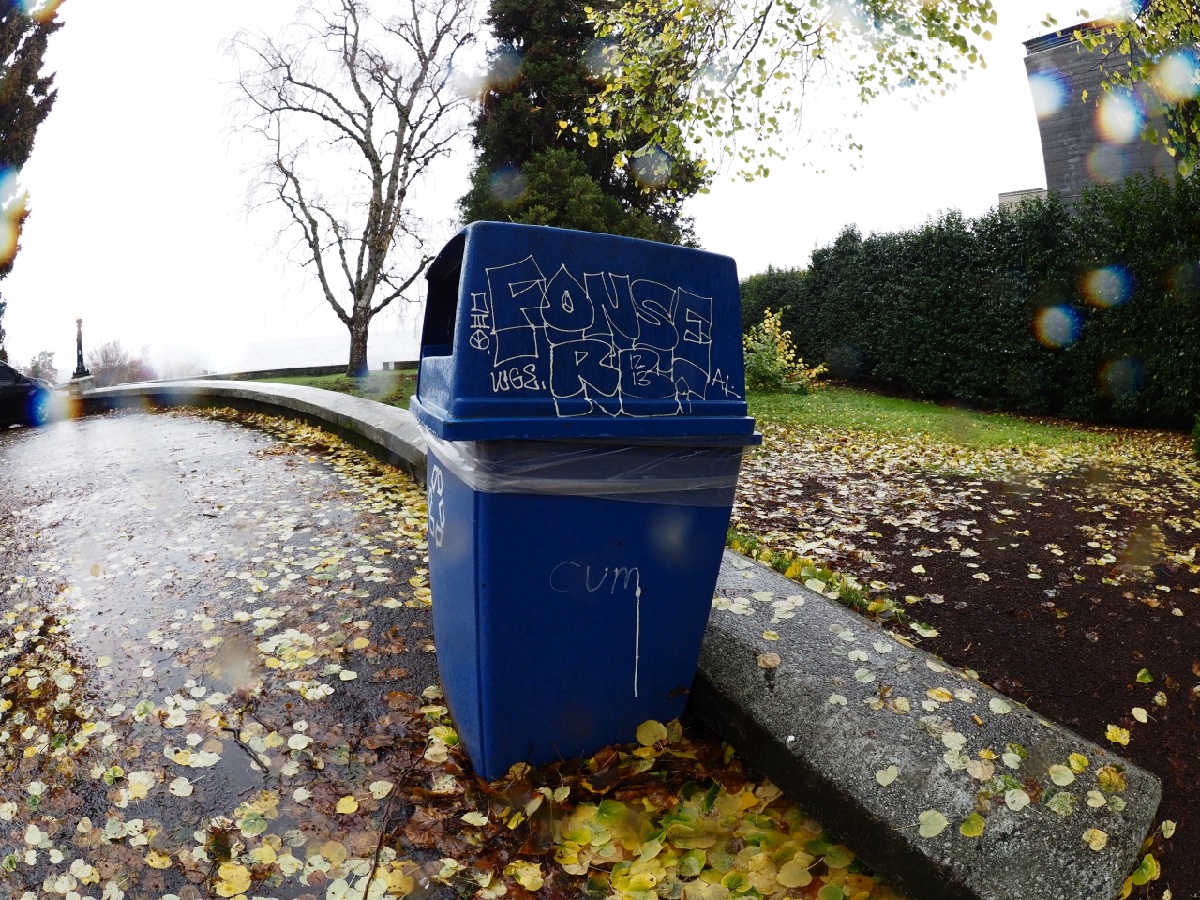 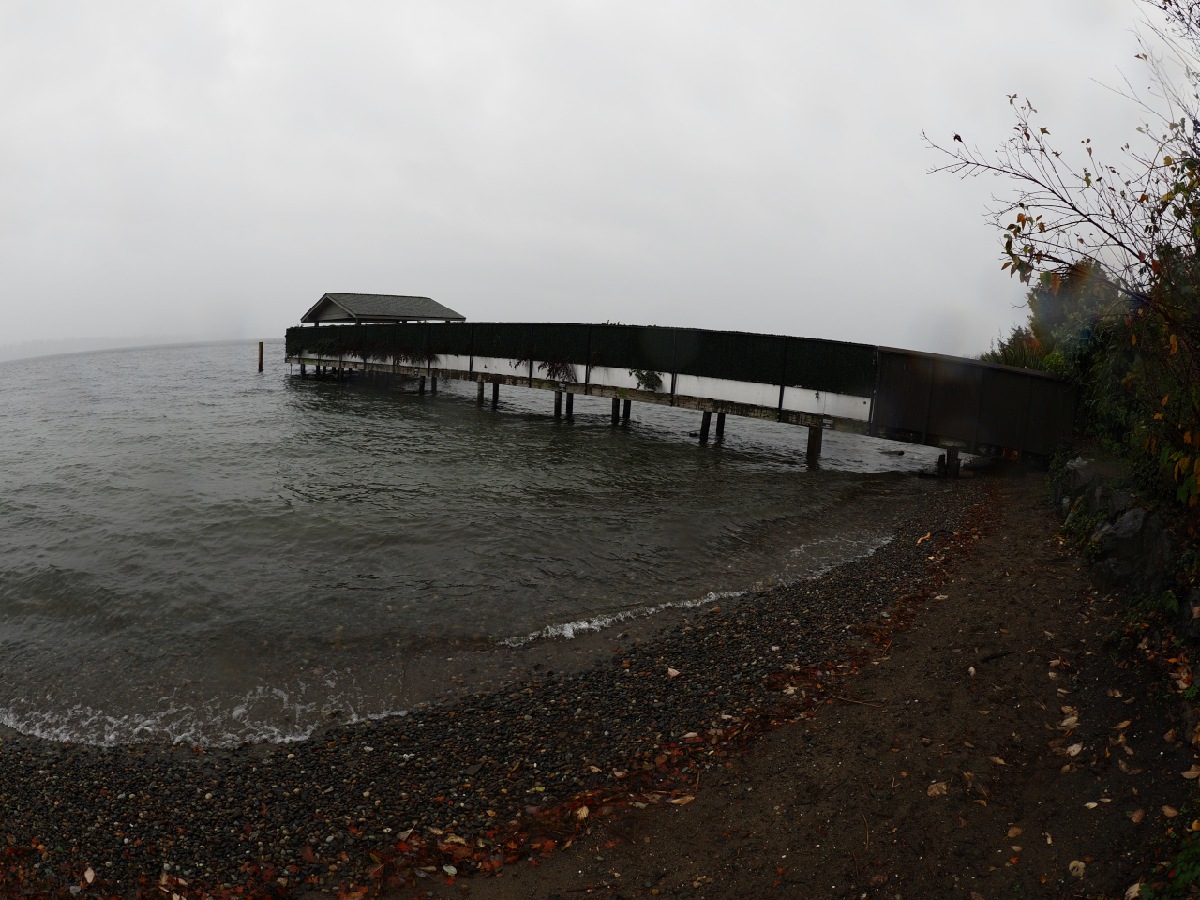 ...and I didn't realize it while I was walking there, but it turns out I was within spitting distance of the house where Kurt Cobain passed away.

Narby Viretta Park became a makeshift memorial, with graffitied park benches and a rock. I will probably visit in the future. Neighbors have not permitted the erection of any permanent memorial. 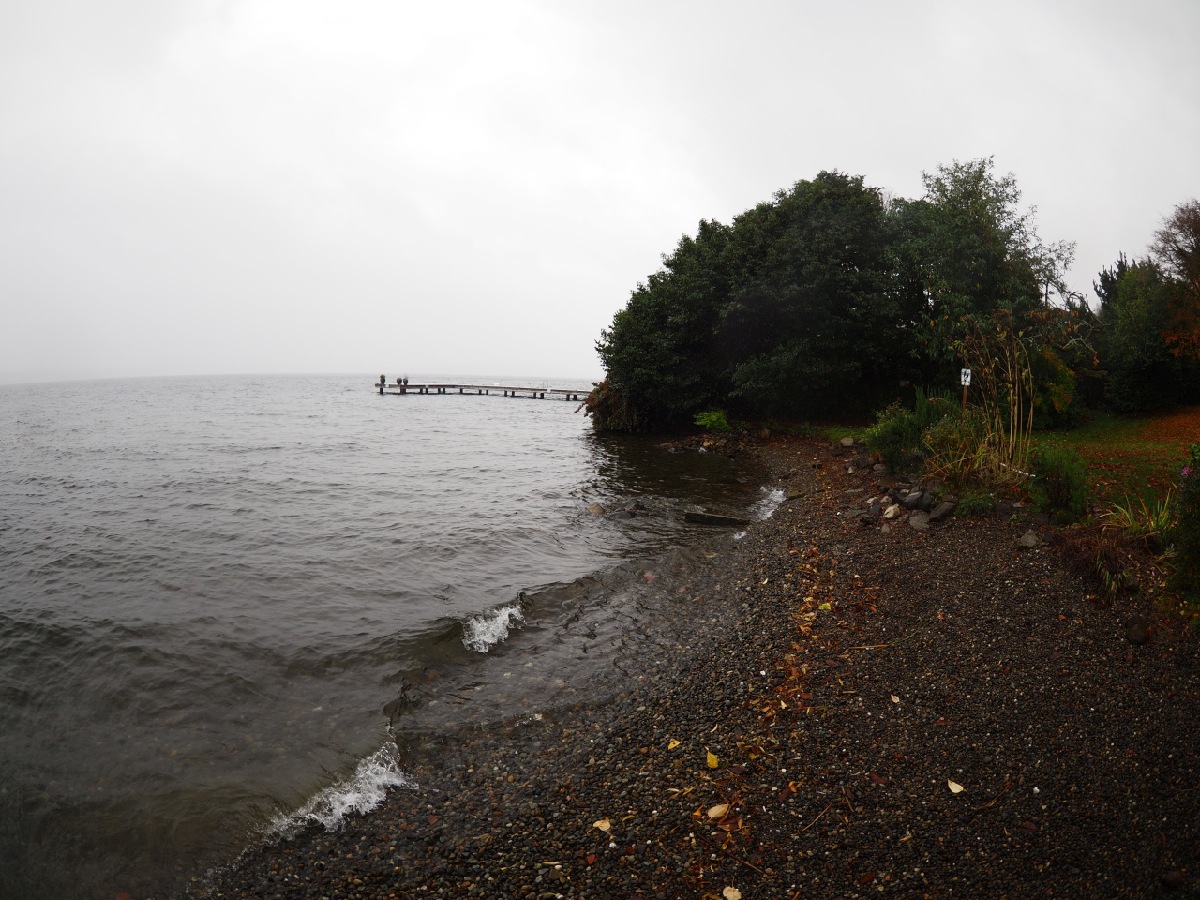 Walking past gated home after gated home is somewhat tiring, and I couldn't help but imagine that I would find other beach access points as dejecting as the ones I patronized, so I was looking for something else to do.

A glance at Google Maps on my phone told me that the "Valley of the Gnomes" was a short walk away, so over there I went, up a beautiful set of city stairs. 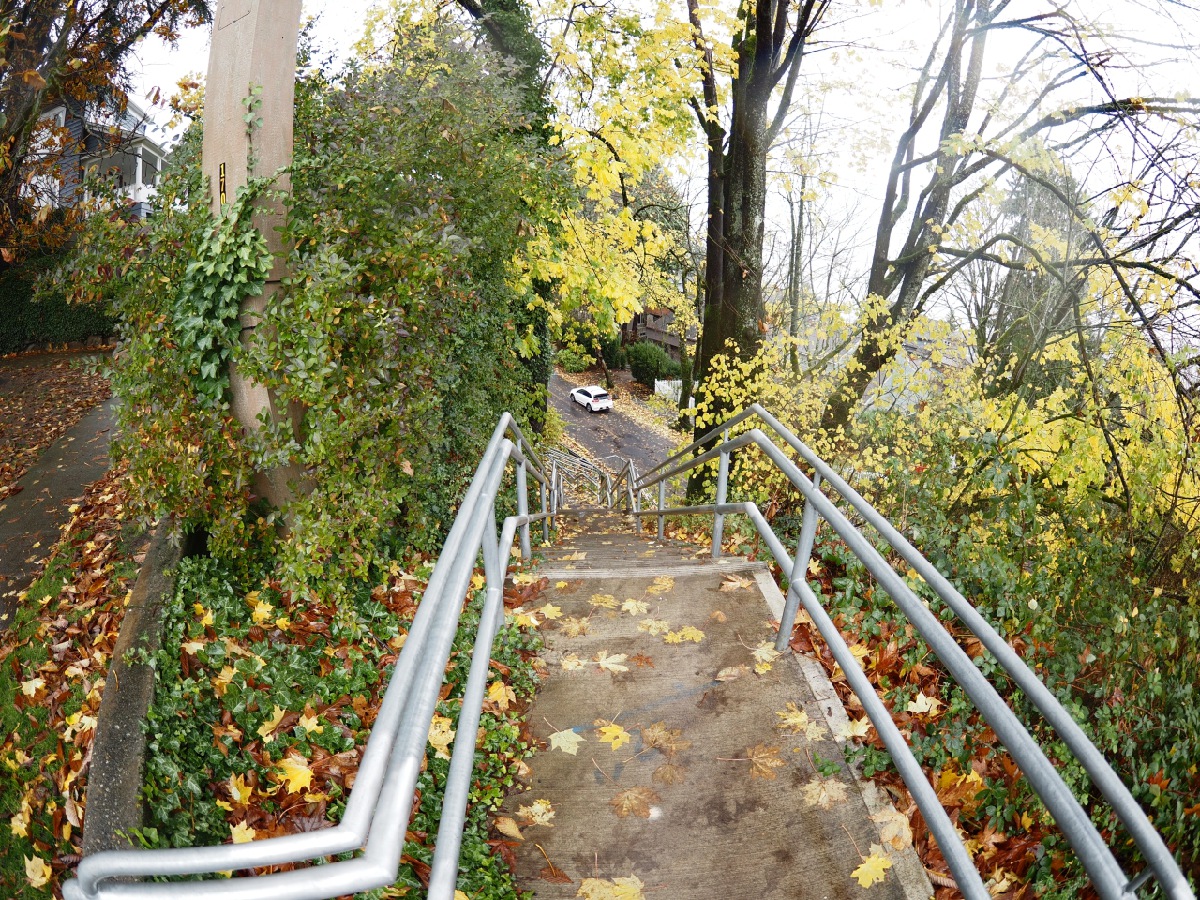 So, what is the Valley of the Gnomes? It's a really cool wooden walkway that posits a simple challenge to visitors. 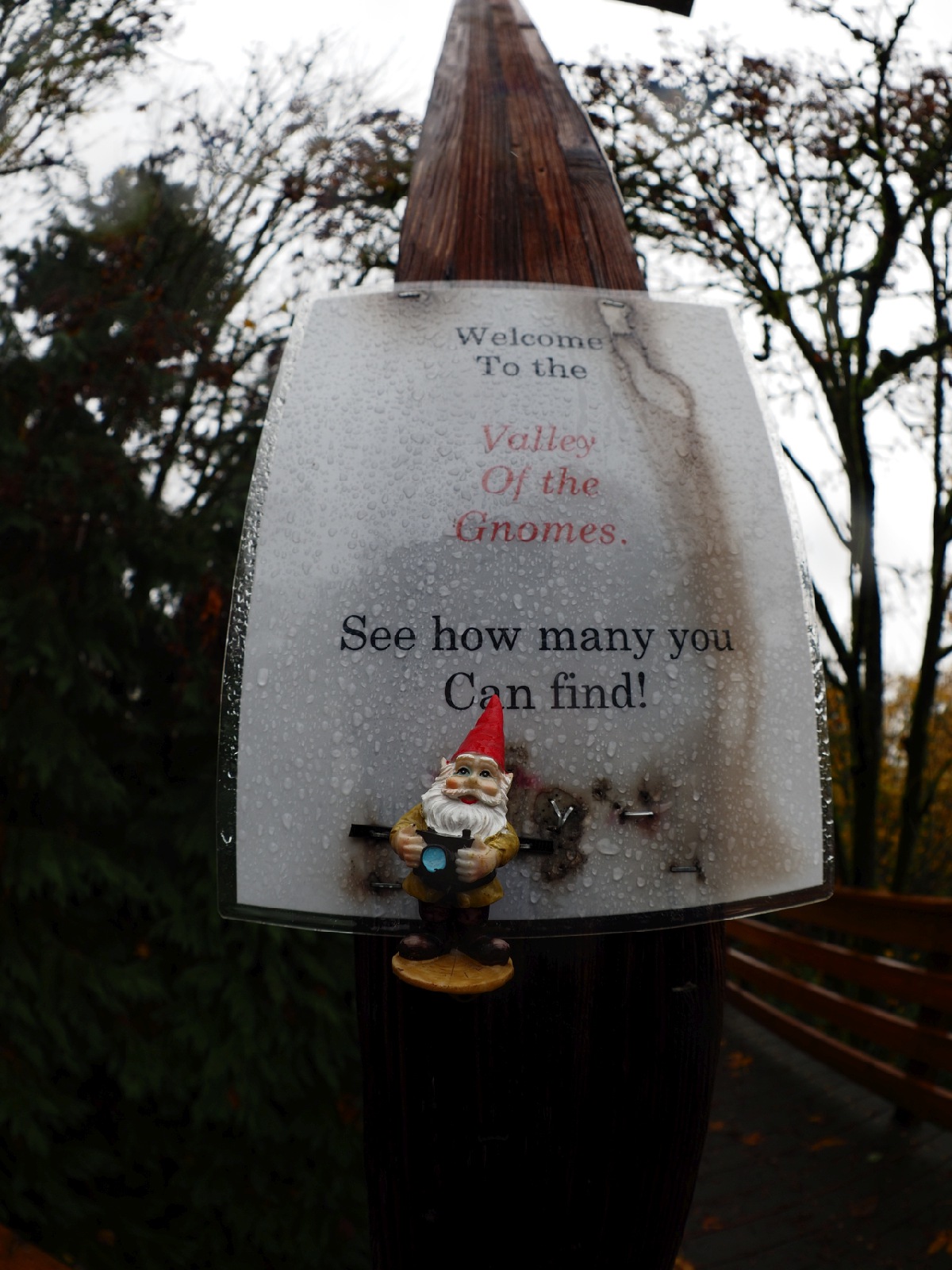 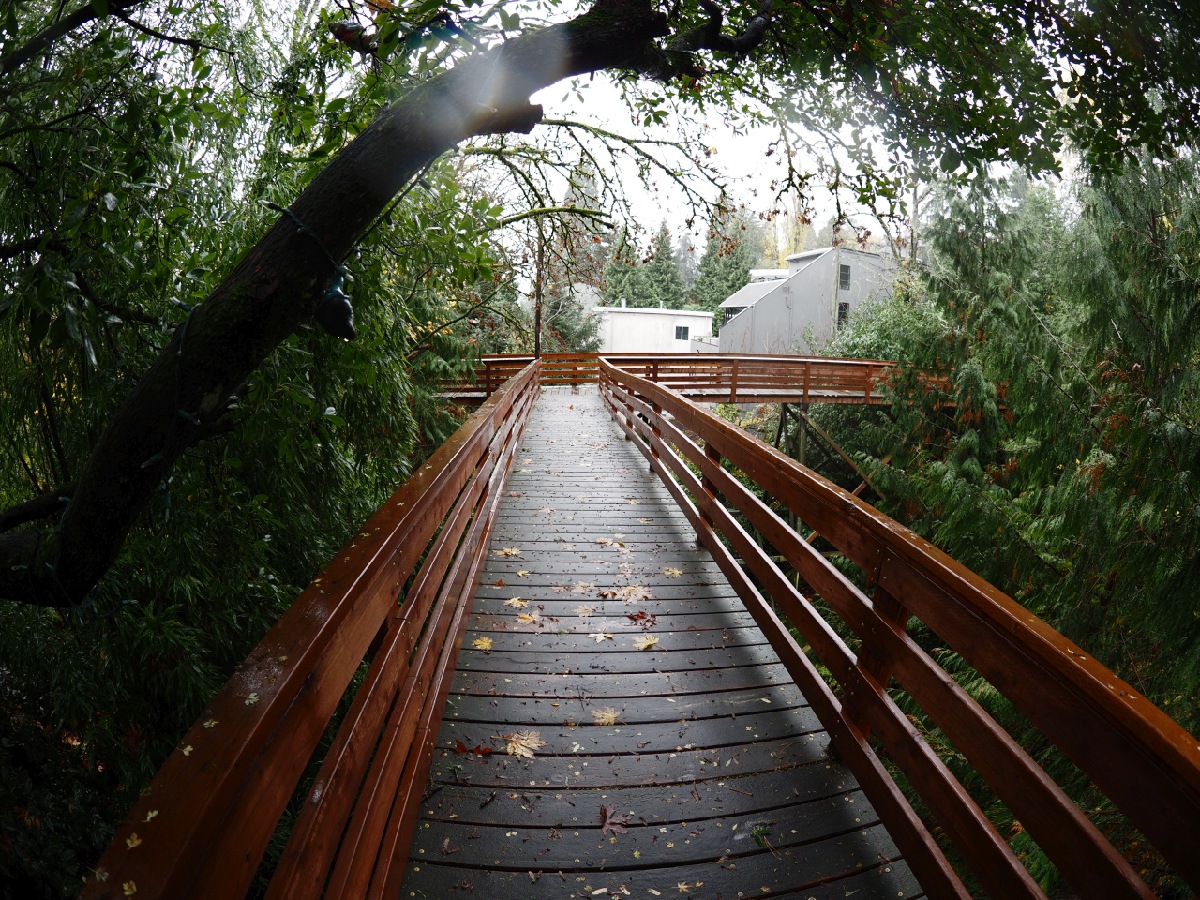 The walkway itself is really cool, seeing as how it is quite high and wooden, and there are plenty of gnomes, most of which I will not reveal to my readers. 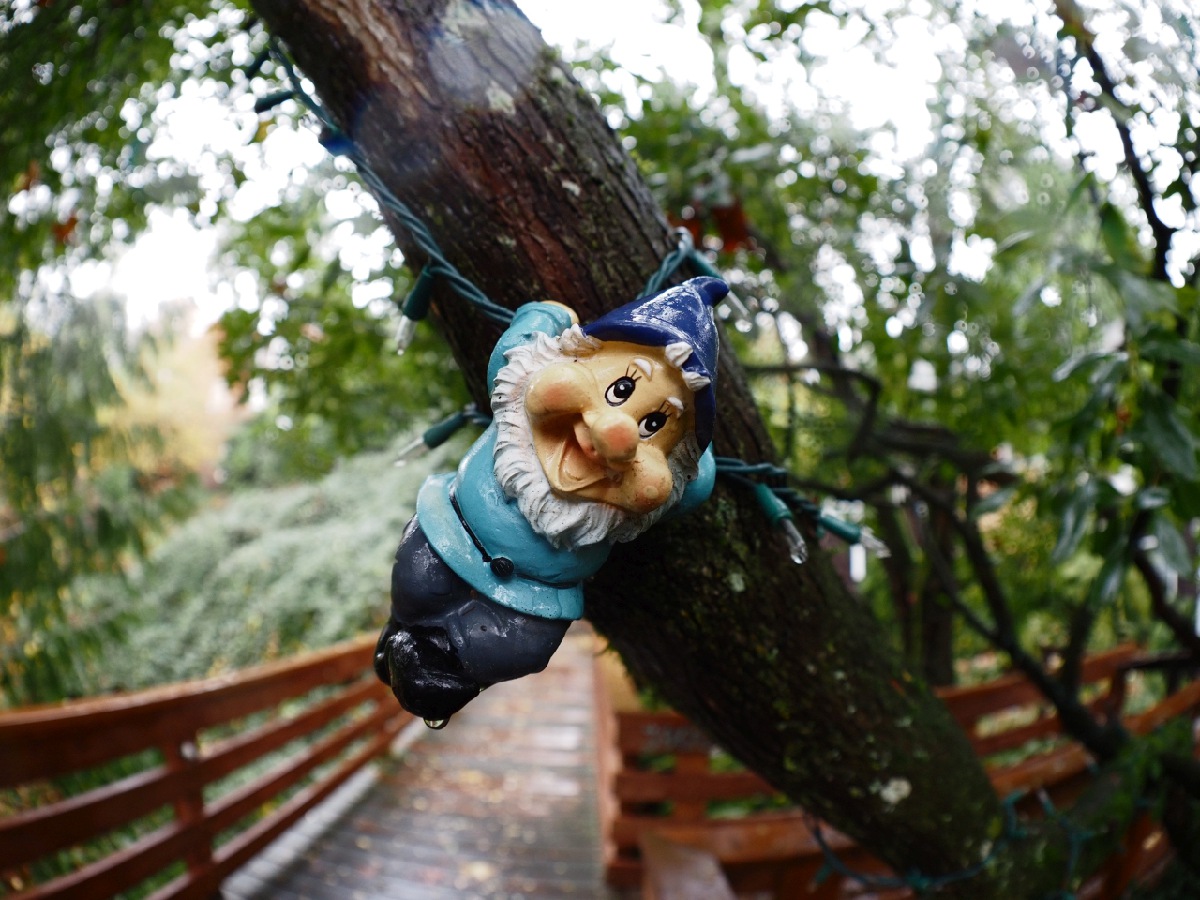 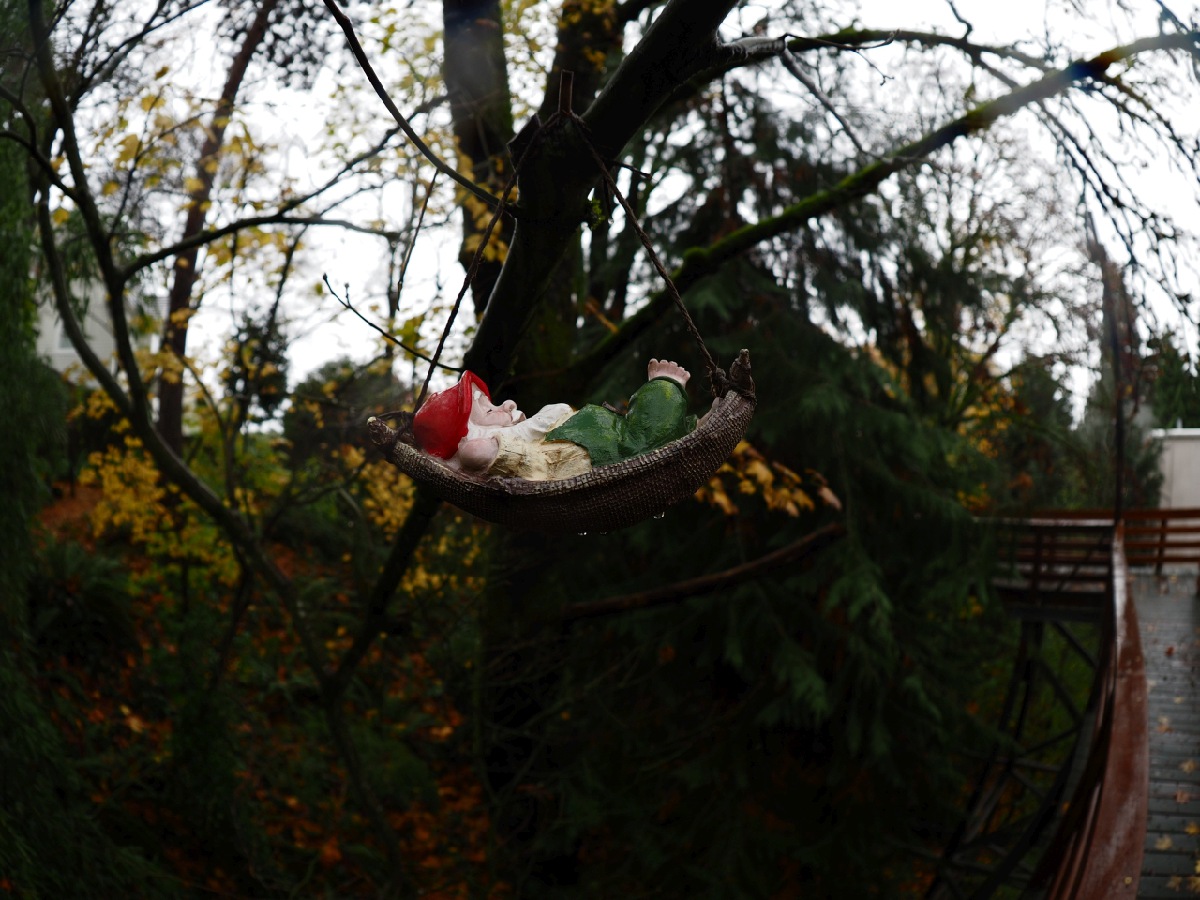 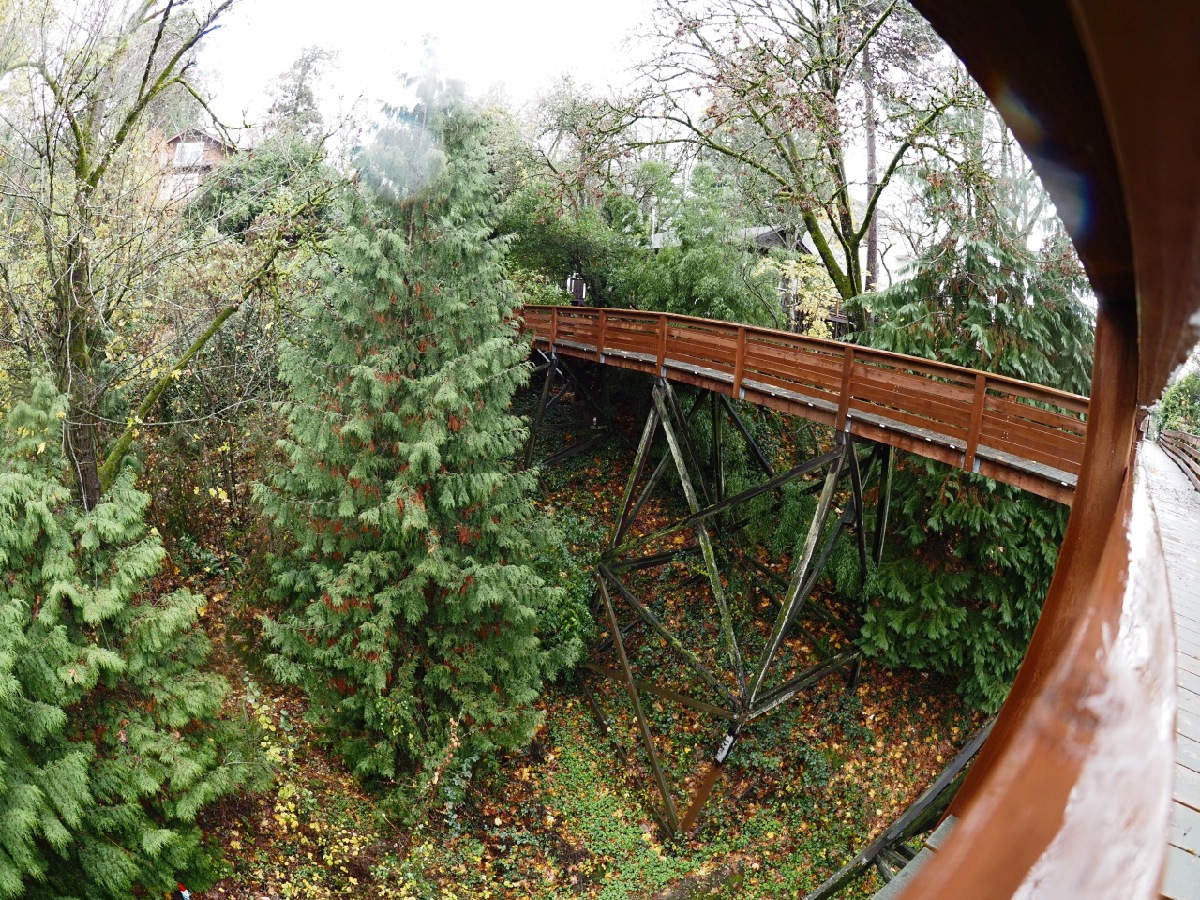 Trying to show off the height of the walkway with the weirdest composition possible.
×

So, hey, if you ever feel down about politics while walking around multi-million dollar homes, there's nothing like a valley of gnomes to cheer you up, eh?