On my last morning of the trip, I awoke with a splitting headache, and decided I didn't really need to hang out around Cannon Beach.

Nearby Ecola Creek State Park was inaccessible due to sinkholes, so I proceeded north to the town of Seaside. I stopped for a bagel and coffee. They were almost passable.

Afterwards, I stopped at Fort Stevens State Park. My expectations were low, but this park, nestled in the northwestern-most corner of Oregon, turned out to be quite a beautiful place...

Come for the Shipwreck, Stay for the Batteries!

Fort Stevens state park is located at the tippy top of Northwest Oregon. For me, the attraction wasn't just that its name was so similar to mine. It was really that it had a beach with a nice lil extant shipwreck on it.

The Peter Iredale ran aground here in 1906 and never sailed again. By the time its crew were ready to try getting it back in the water, its hull had filled with sand, and it was deemed a lost cause. 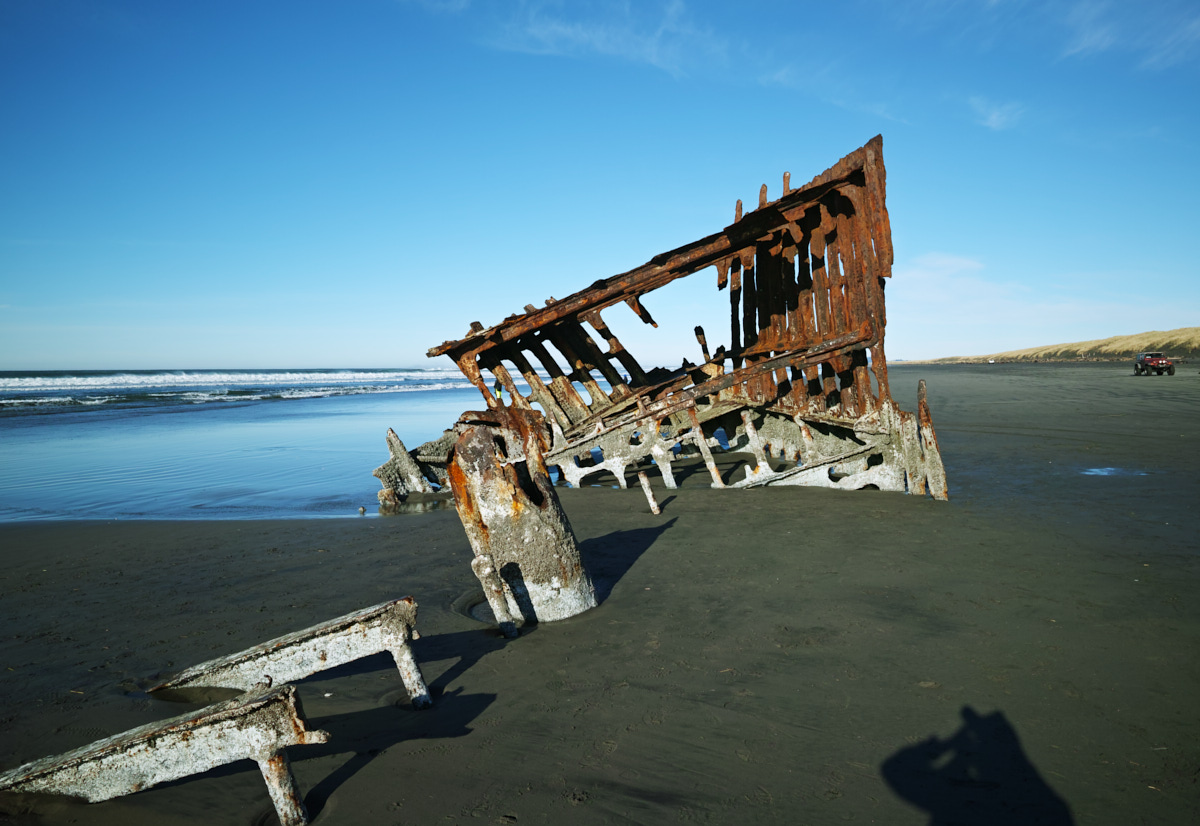 Visiting a shipwreck sounded pretty cool to me, so that was the first place I visited. It turned out to be pretty small and uninspiring. And surrounded by tourists. It was not a great place for me to try to get person-free shots with a wide angle lens. But, I tried anyway. The rest of the beach walk, however, was nicer. 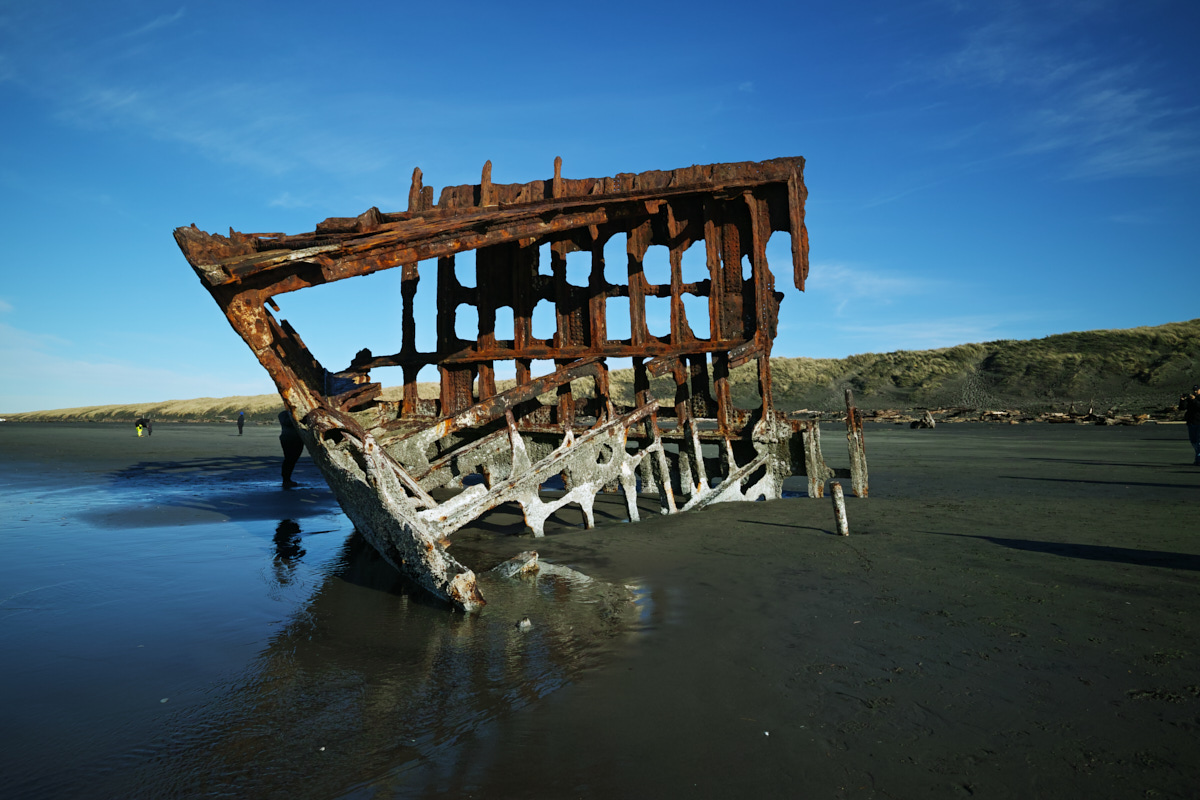 How I strive to present the shipwreck in photos...
×
× 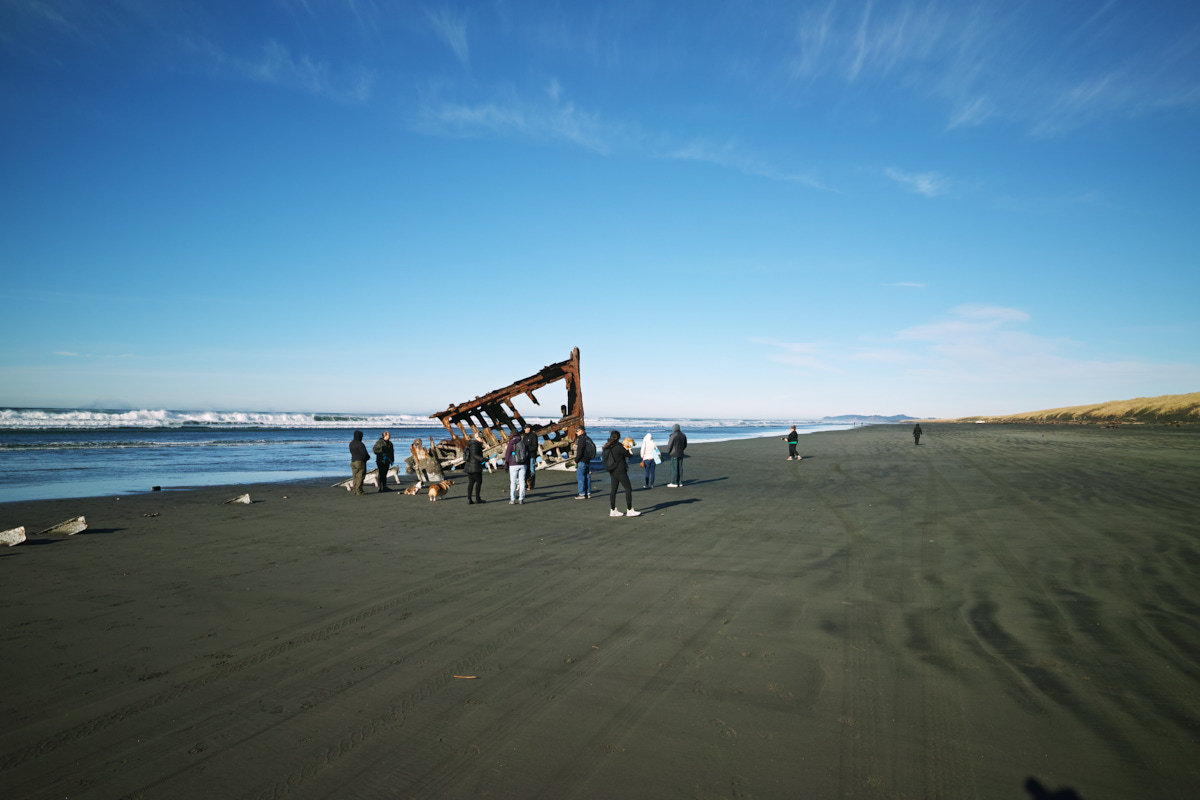 Most of what I saw in reality.
×

After a nice little beach walk, I explored the park further. I'm not big into chest-thumping ra ra ra for America, so I didn't think that I would find the whole fort aspect of the place to be all that interesting.

I was totally wrong about that. The little museum, and the old military batteries are super, super cool.

I don't think I had ever wandered through such an ugly, decayed set of concrete bunkers before in my life, as I did when I visited Battery David Russell... 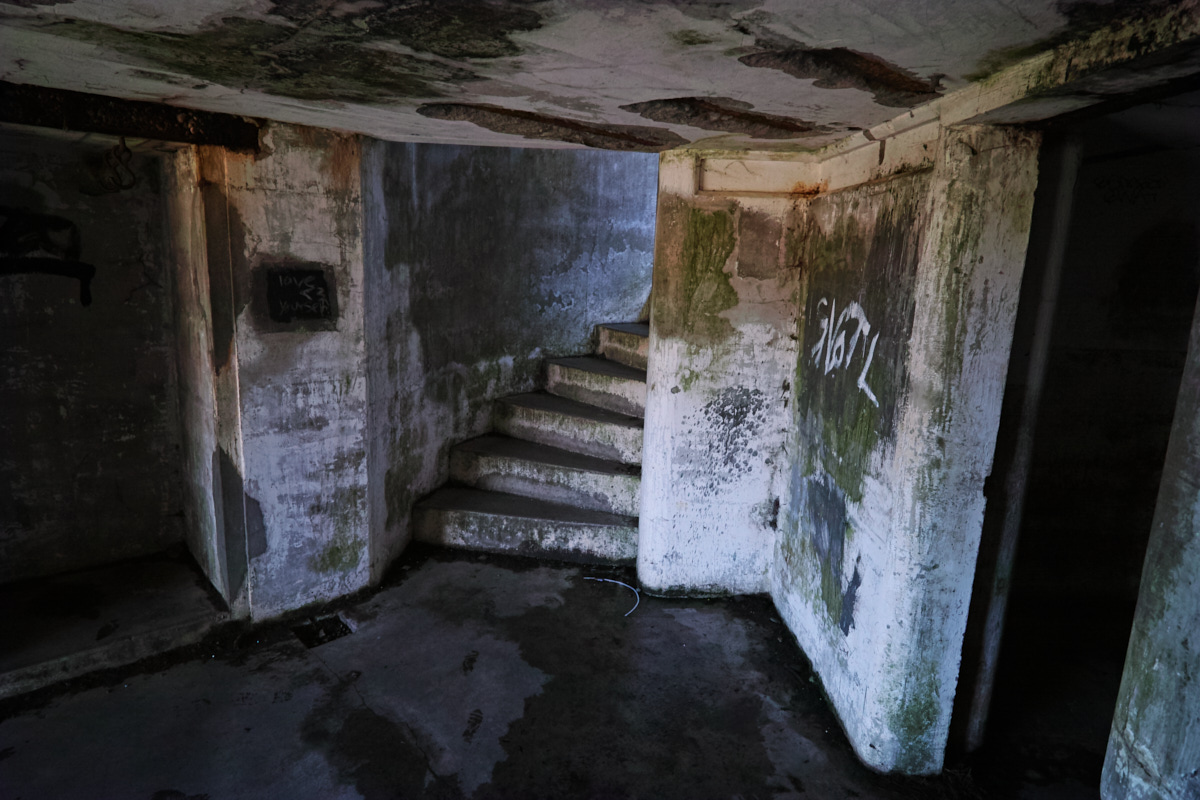 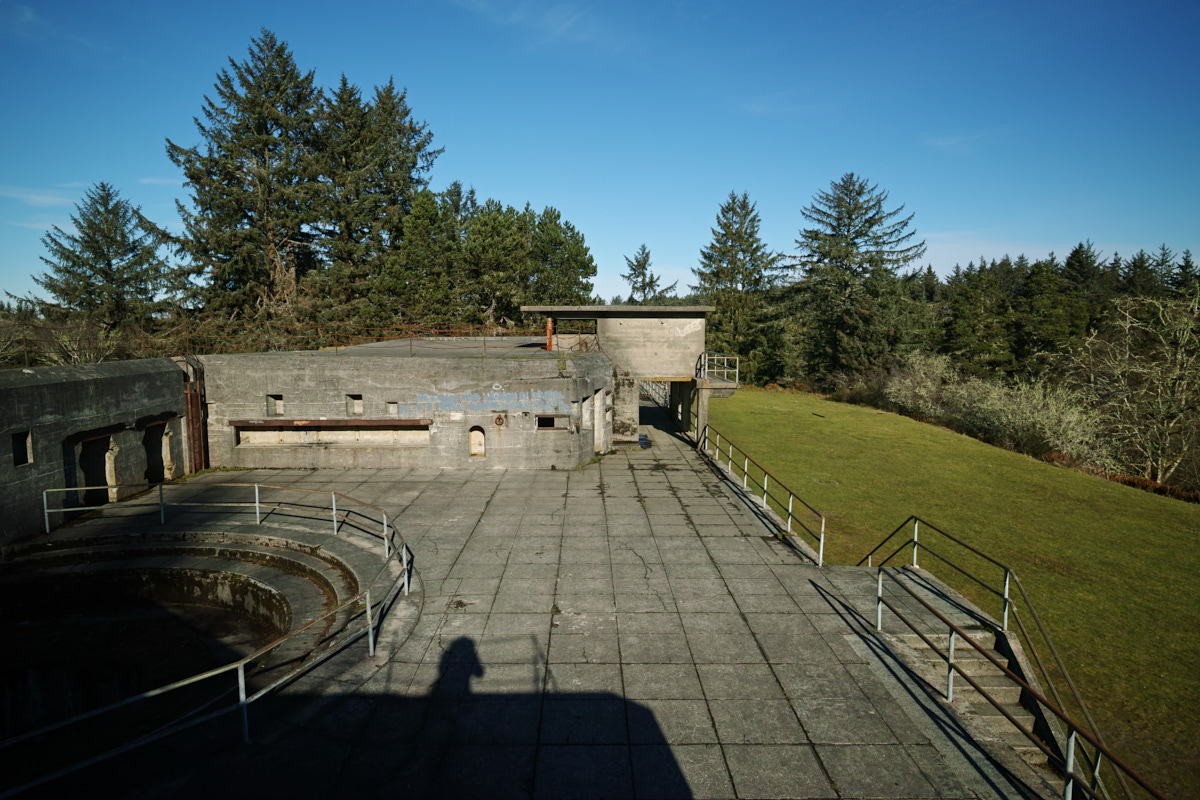 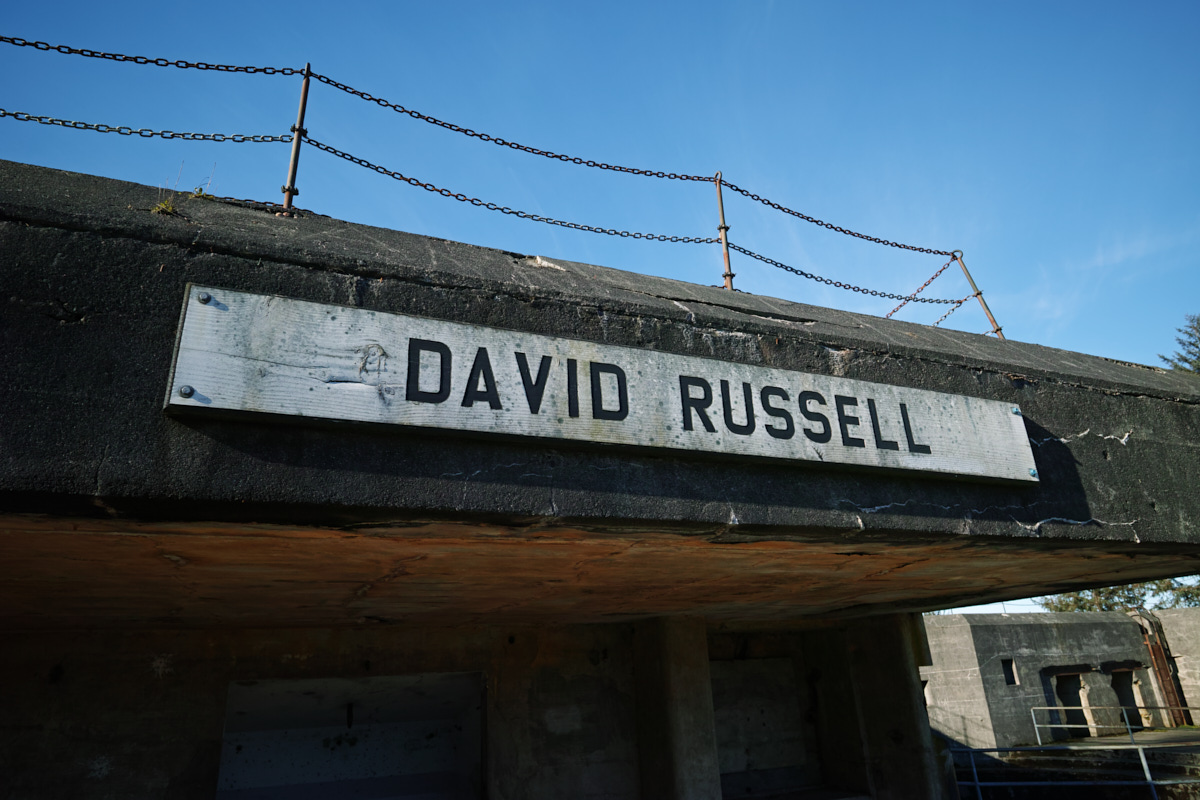 In terms of intrinsic historic interest, Fort Stevens was home to the only Axis Powers attack on a U.S. military base in the continental U.S. during World War II. 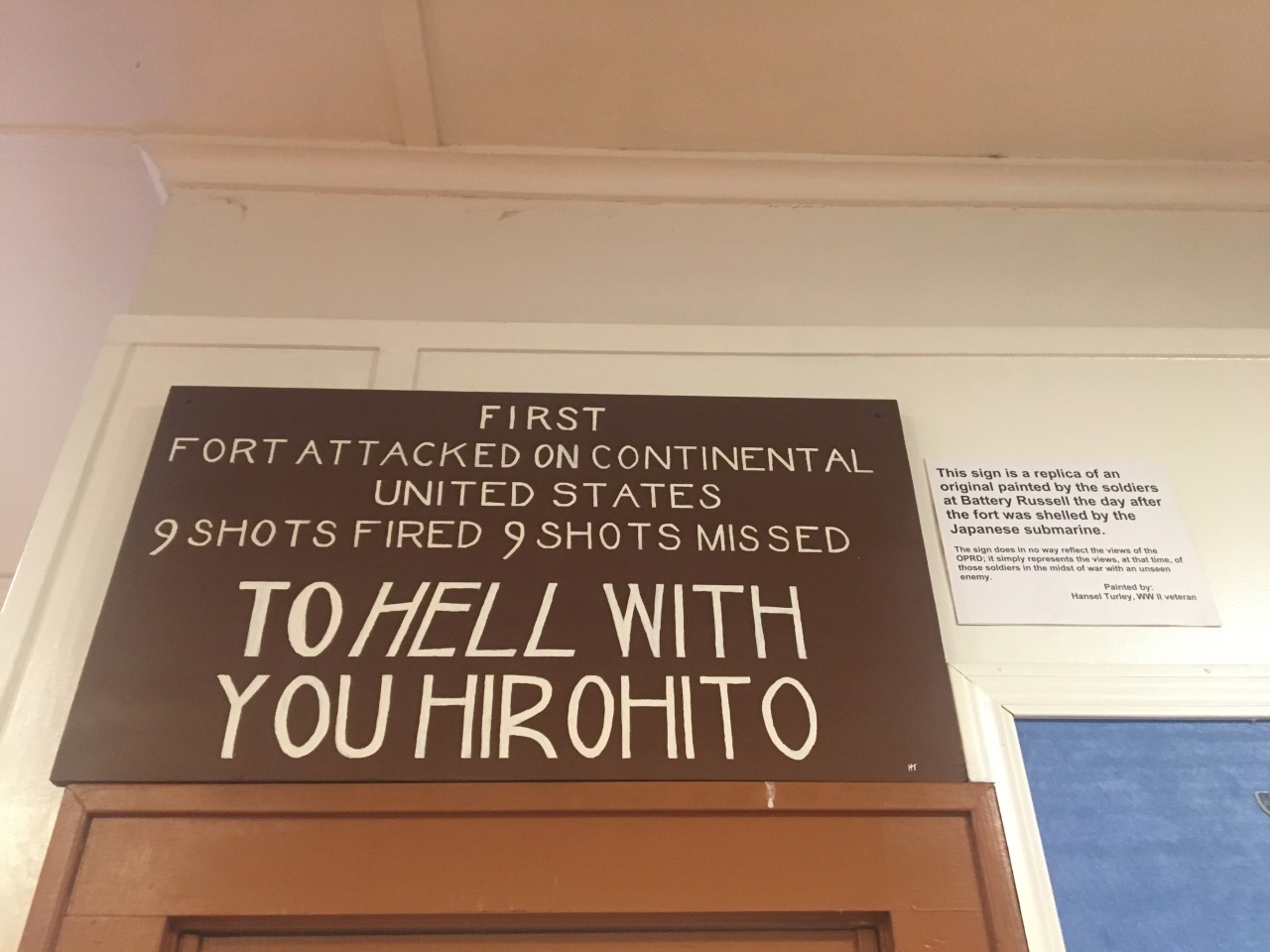 Essentially, a Japanese submarine snuck into the Columbia River, following fishing boats in order to avoid mines. The captain targeted Battery Russell and fired nine shots, all of which missed. The commander of Ft. Stevens ordered a blackout and forbade the U.S. soldiers from returning fire, which helped hide their positions.

The Japanese submarine captain is later quoted as saying that if he realized how much heavy artillery was pointed in his direction, he never would have fired in the first place. 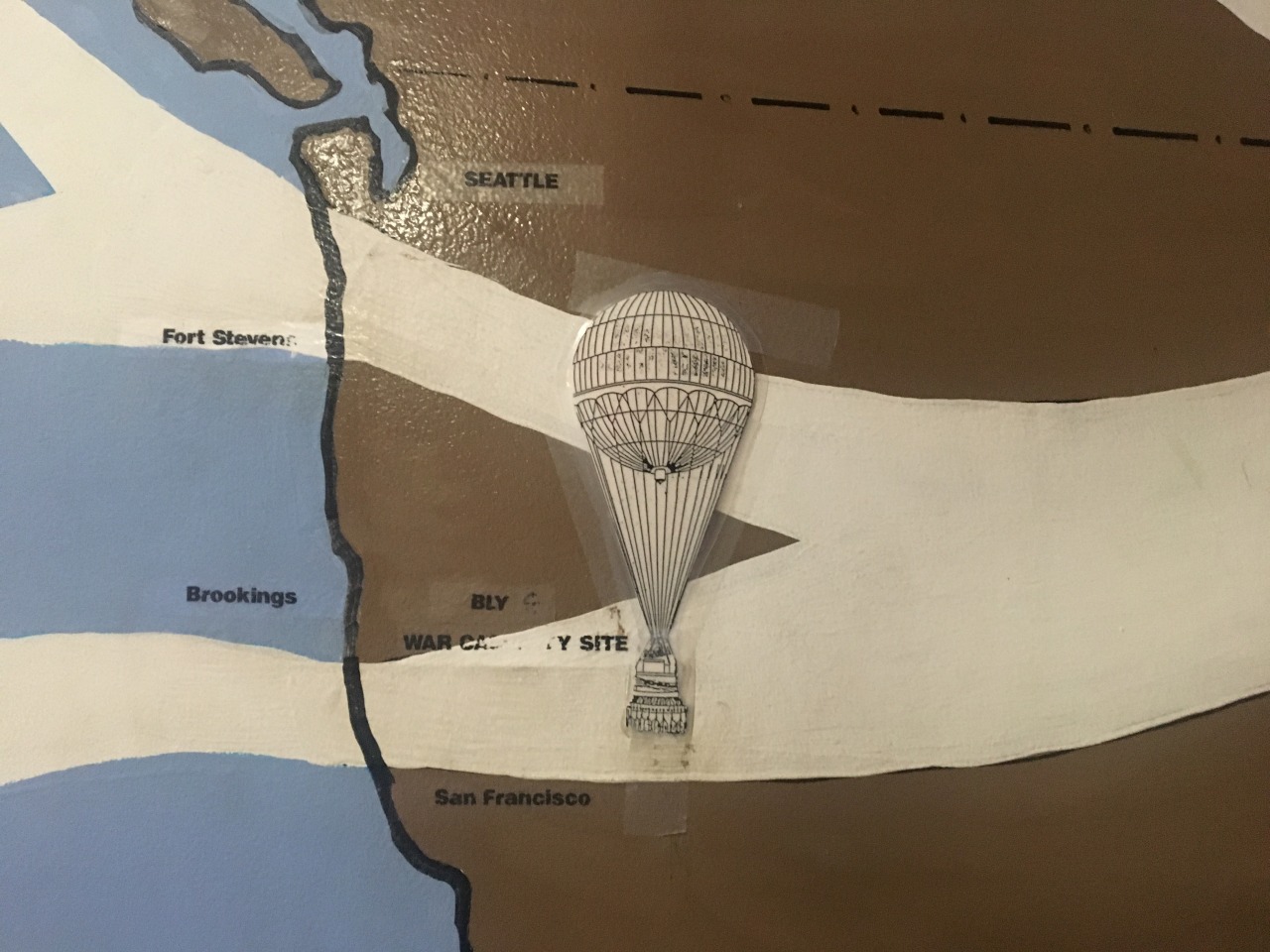 The museum's depiction of an unsuccessful last ditch Japanese proposal to bomb the United States via unmanned hot air balloons.
×
× 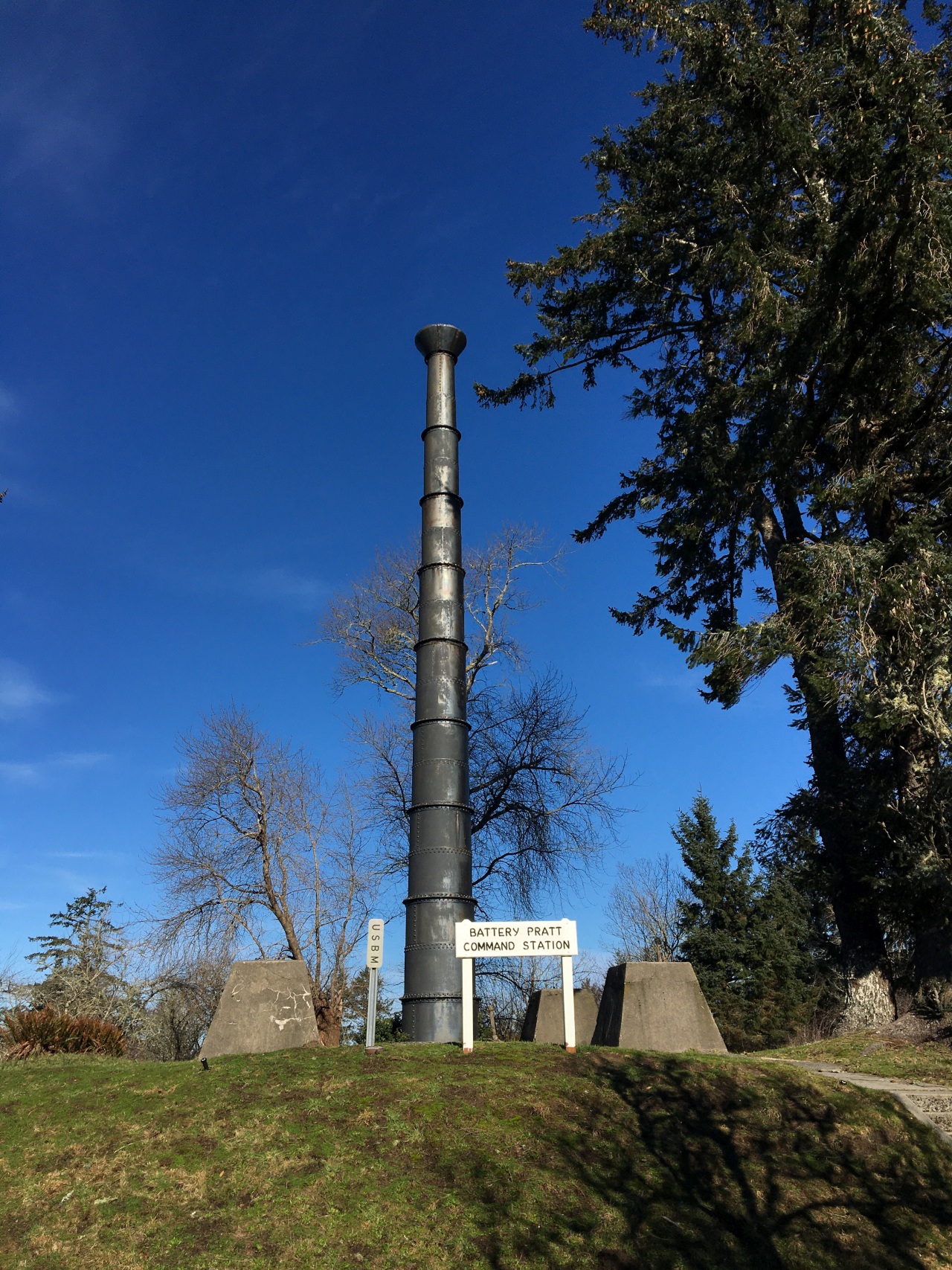 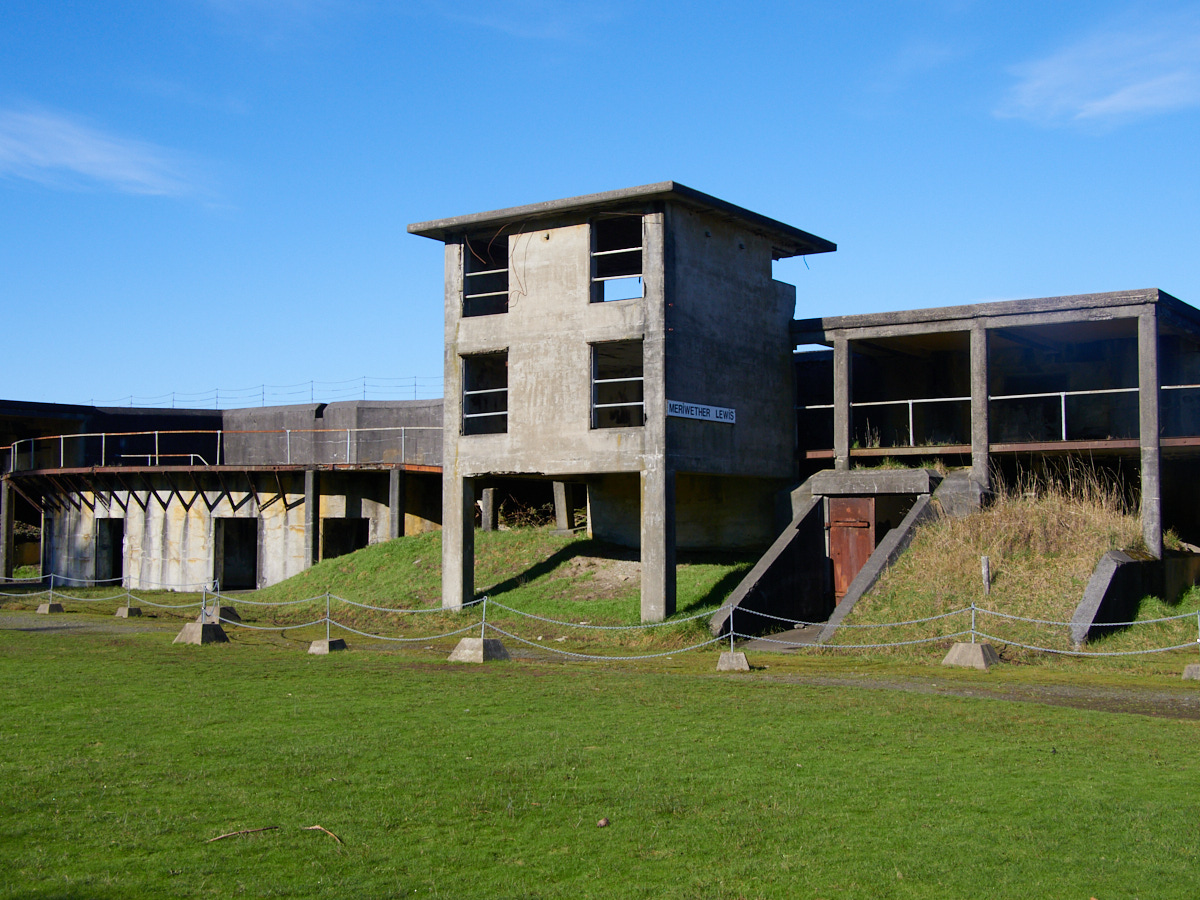 Lewis & Clark National Historic Park is nearby, with a replica of Fort Clastopp, the place where they regrouped to head back east after their lengthy cartographic journey. I paid it a visit because I had some time to kill before I was thinking of getting dinner in the town of Astoria, OR.

There is a small museum devoted to the expedition. The museum presents their journey as inevitable and necessary in the clash between empires for fur-trading. Yikes!

Here, there are replicas of the camp (which being made of untreated wood in a rainforest, rotted many years ago.) 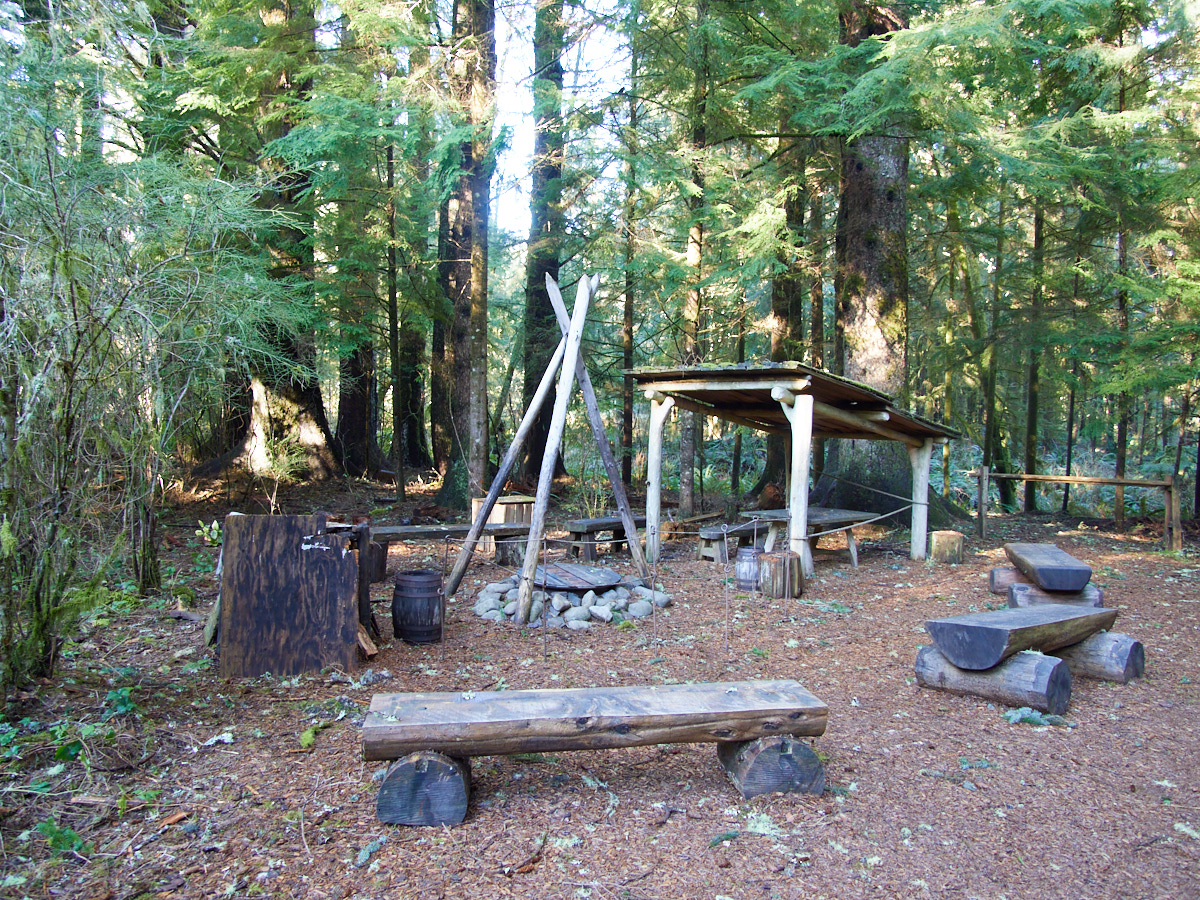 More interesting and more captivating to my eye was the nearby short Netul River trail which led me to an a boat launch that was home to some replica wooden canoes. This was a very pleasant walk indeed. 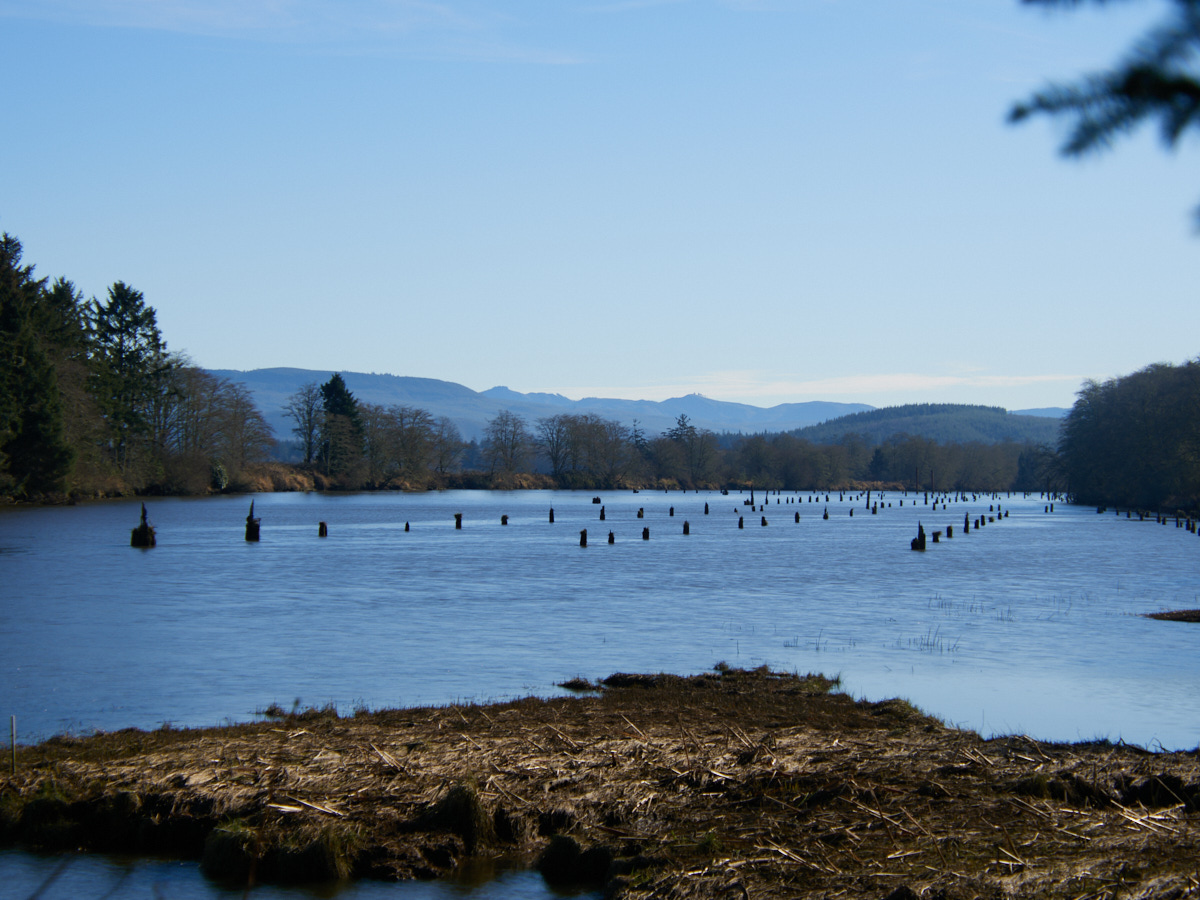 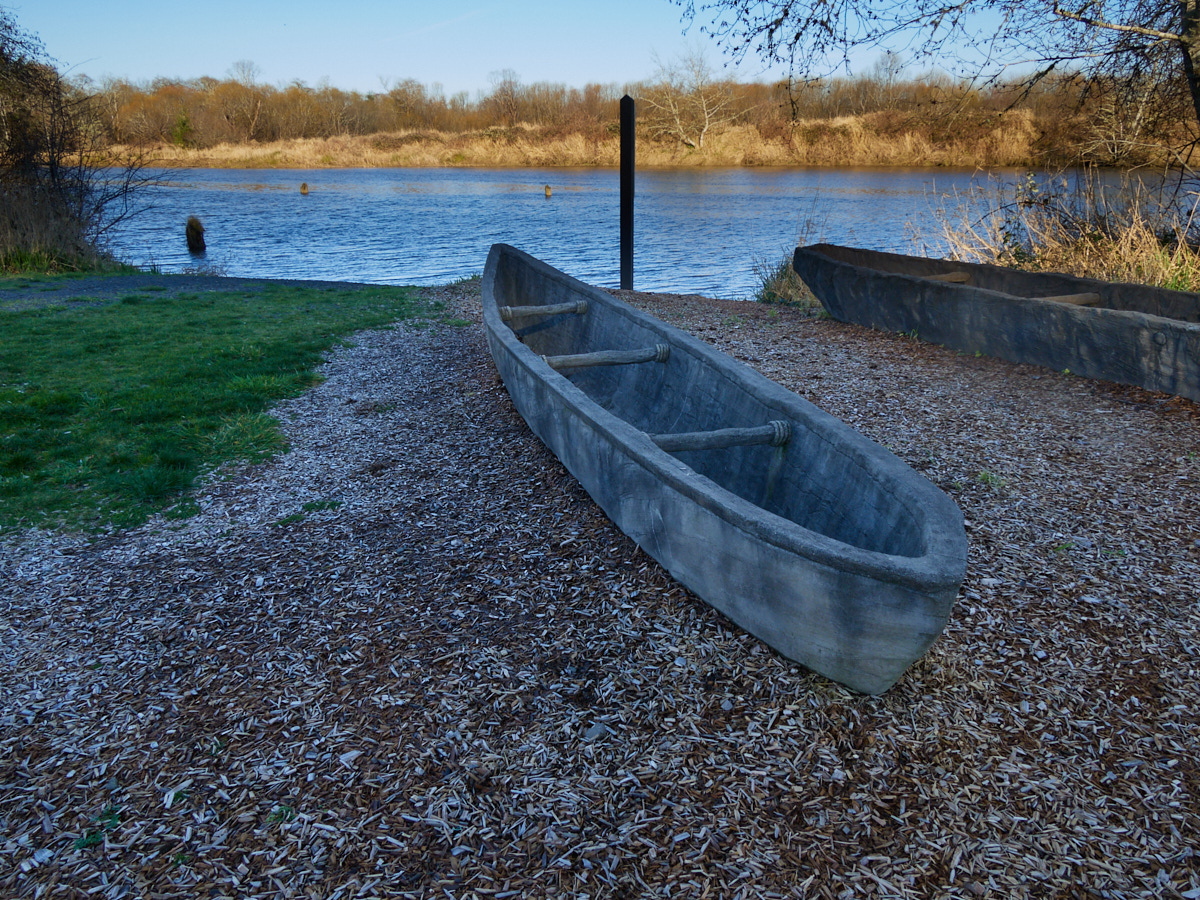 The Early Evening in Astoria

From there, I hit Astoria, Oregon where I planned to buy a cup of coffee and some dinner. 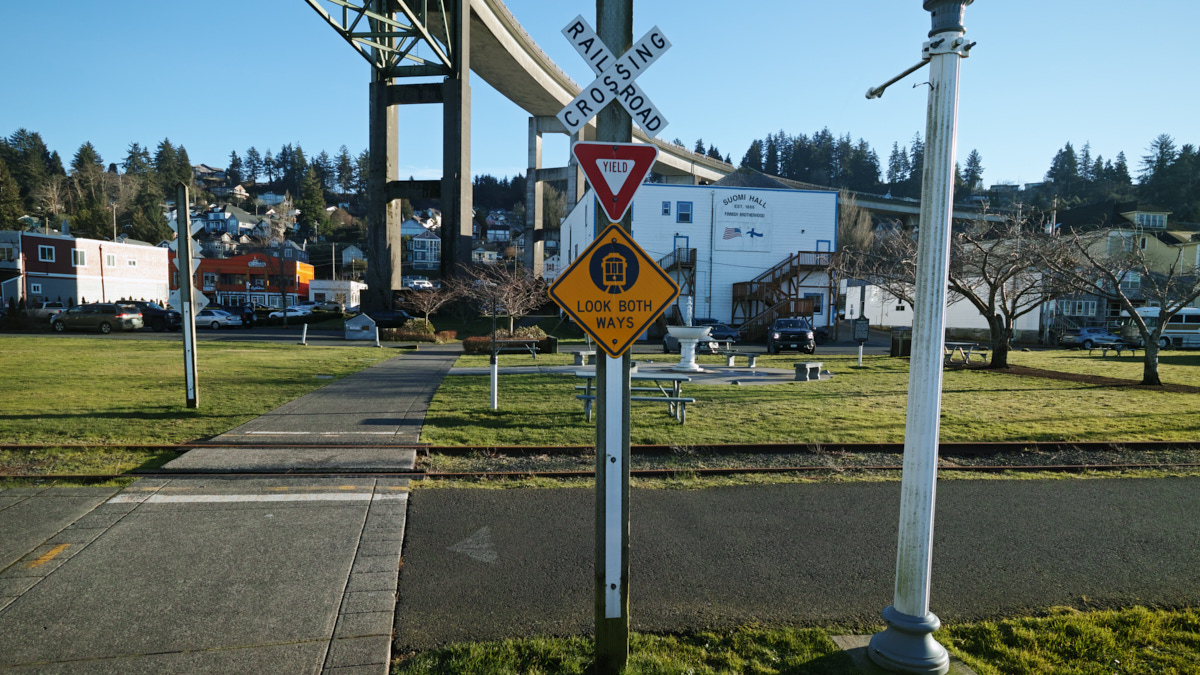 It seemed to be quite a fledging town, easily the seaside town that struck me as the one with the most going, and which seemed like it would be the most pleasant place to live.

I checked out part of the Riverwalk, which parallels the Columbia River, including crossing underneath the Astoria–Megler Bridge. At a little over four miles in length, it's the largest truss bridge in North America. 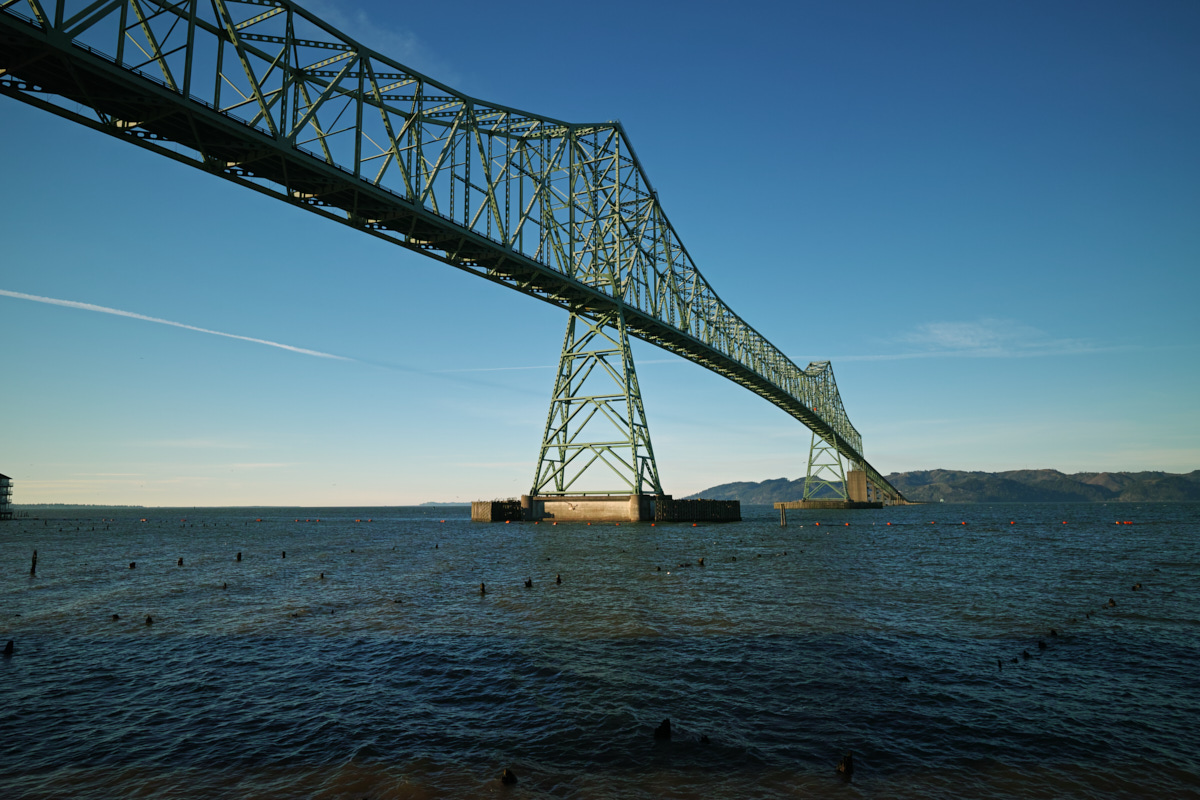 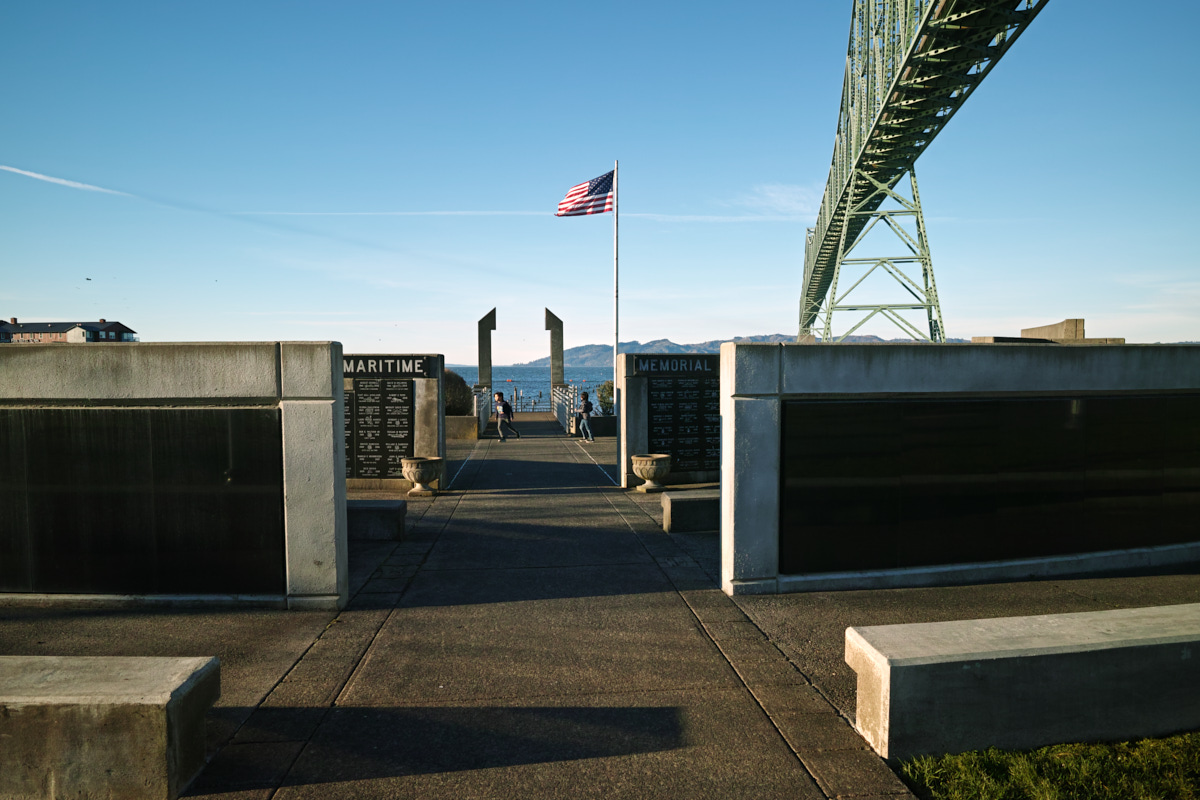 I poked around a few of the shops in the commercial district. Antiques shops, bars, arcades, cafes and eateries abound. I took a look at some Finnish design, picked up a very nice latte from a very nice book shop, and eventually settled on a sausage sandwich from a nearby Italian deli. 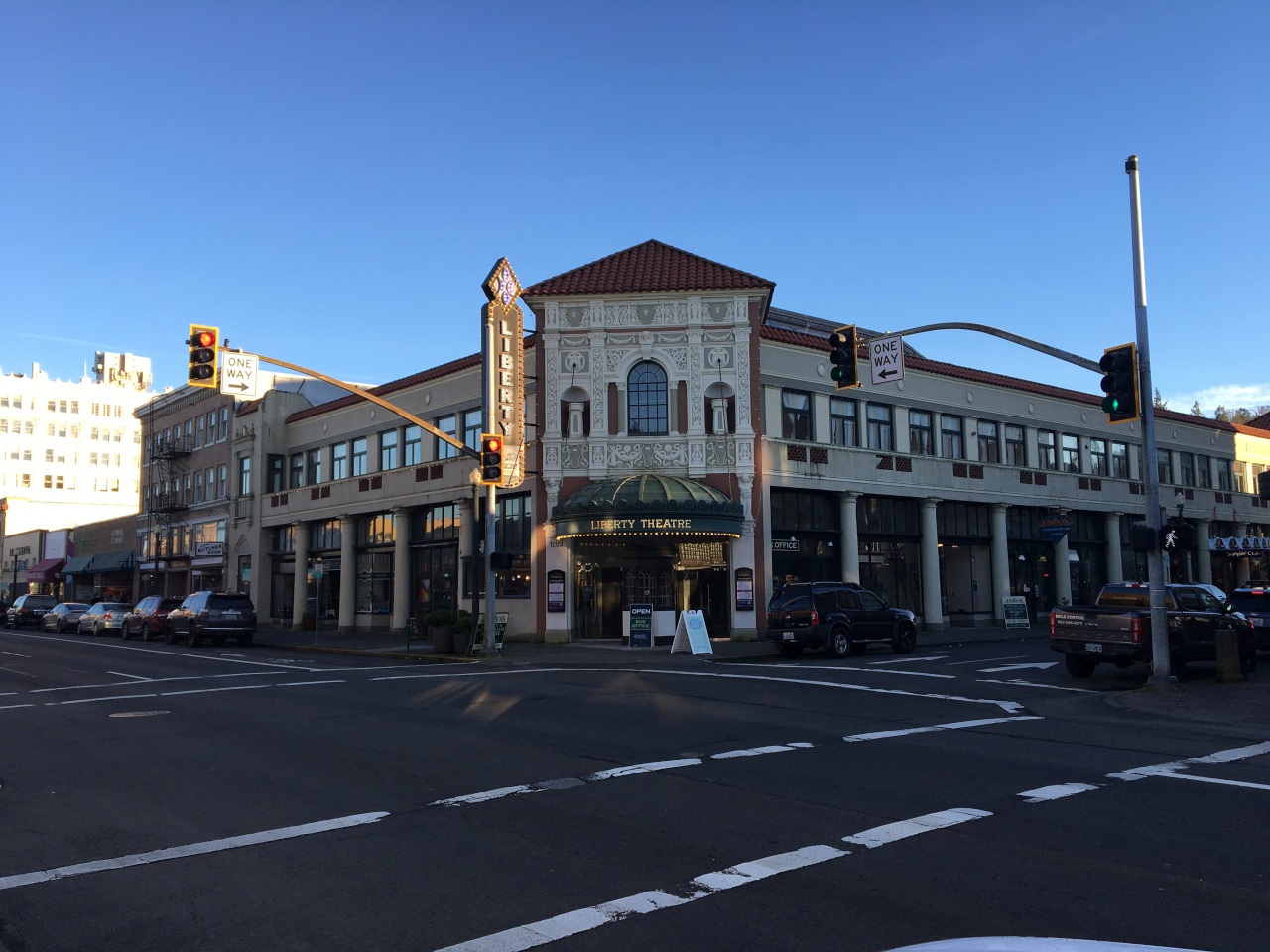 And then, feeling the magnetic pull of my own bed, I hopped on the highways, for a three hour drive back to Seattle, spanning sunset and twilight.

I slept soundly that night.

The following days, I still felt a bit under the weather and tuckered out, so I stayed in and avoided seeing anyone. Not long thereafter, I self-tested positive for COVID-19.

I was glad I had taken so many precautions and avoided being indoors and unmasked during my visit to California and Oregon. I was vaccinated, I was boosted, and yet Omicron still got me. At least I had a frozen chicken pot pie I picked up in Astoria to comfort me...

I left for California and Oregon because I felt hemmed in by Omicron and the dreary Seattle winter. I encountered dreary Oregon winter, and California fog, and I came home with my own nascent case of Omicron. And yet, I did not regret a thing.

The Oregon coast and the California Redwoods are positively beautiful. I would have much preferred to stay healthy, and to have planned my trip in such a way that I didn't wear myself down so much. And yet, I am also thrilled that I got to see, experience, and hike through so much beauty.

Perhaps, then, it's no surprise that as soon as I recovered from Omicron, I wanted to start planning my next big road trip...