Earlier this month, I decided finally got around to signing up for the "Olympus Test & Wow" program.

As far as I can tell, this promotion has been running for quite a number of years now, without any regard for the shifting landscape of photography or the sale of Olympus's camera division.

The Test & Wow program works thusly: if you are lucky enough to live near one of the ten or so retailers who are in the program, you can fill in a form and then borrow some nice Olympus kit for four days free of charge. Obviously, I decided to borrow the most expensive thing possible: the Olympus 300mm f/4 Pro.

You're prohibited to use the equipment for commercial purposes, and your sole goal should be "testing." As a consequence, I have elected to host these photos on Flickr at maximum resolution under a Creative Commons Non-Commercial Share-Alike license, rather than to host them privately.

(Side note -- the code that embeds the Flickr images here is janky and not totally bug free, so if something doesn't display, just click the link on that image to see it.)

What could I do?

Step one: go to where birds are. As far as I could tell from the internet, one of my best bets was the Skagit Wildlife Area-Wiley Slough, a mere hour-ish drive from Seattle. And let me tell you, it's a popular spot, both for birding and for birds. Binoculars and tripods abound.

The weather was just about perfect. It was overcast, but not too drizzly, which meant that there was lovely, diffused light around at mid-day. It wasn't too foggy, either.

I spent a good while walking around, very much in tune with my surroundings. There are a few birds that I spotted that I did not manage to photograph well, but that's okay. I'm honestly blown away by the quality of some of these photos, and absolutely overjoyed that they exist, and that by some miracle of life... I am the photographer. 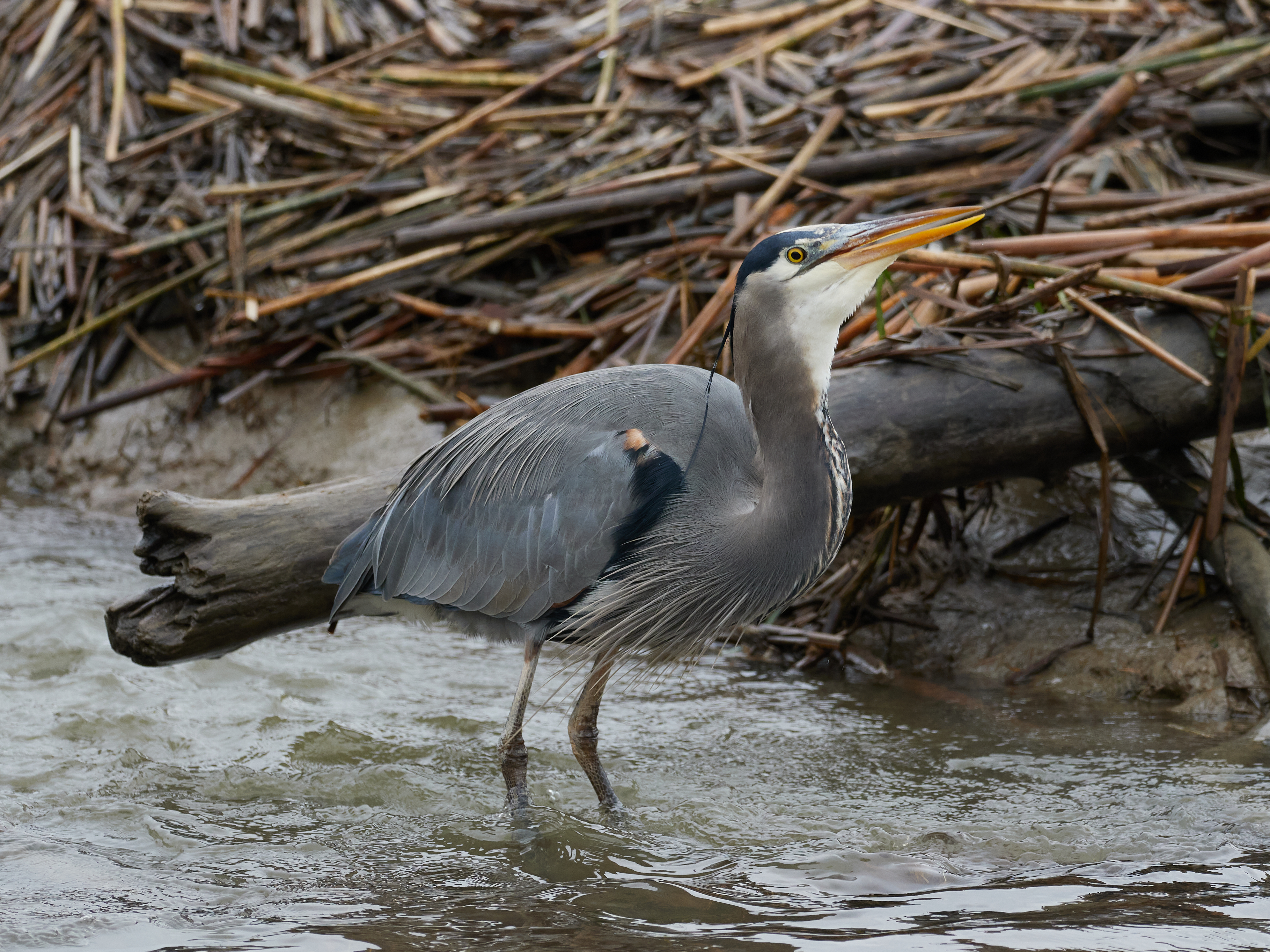 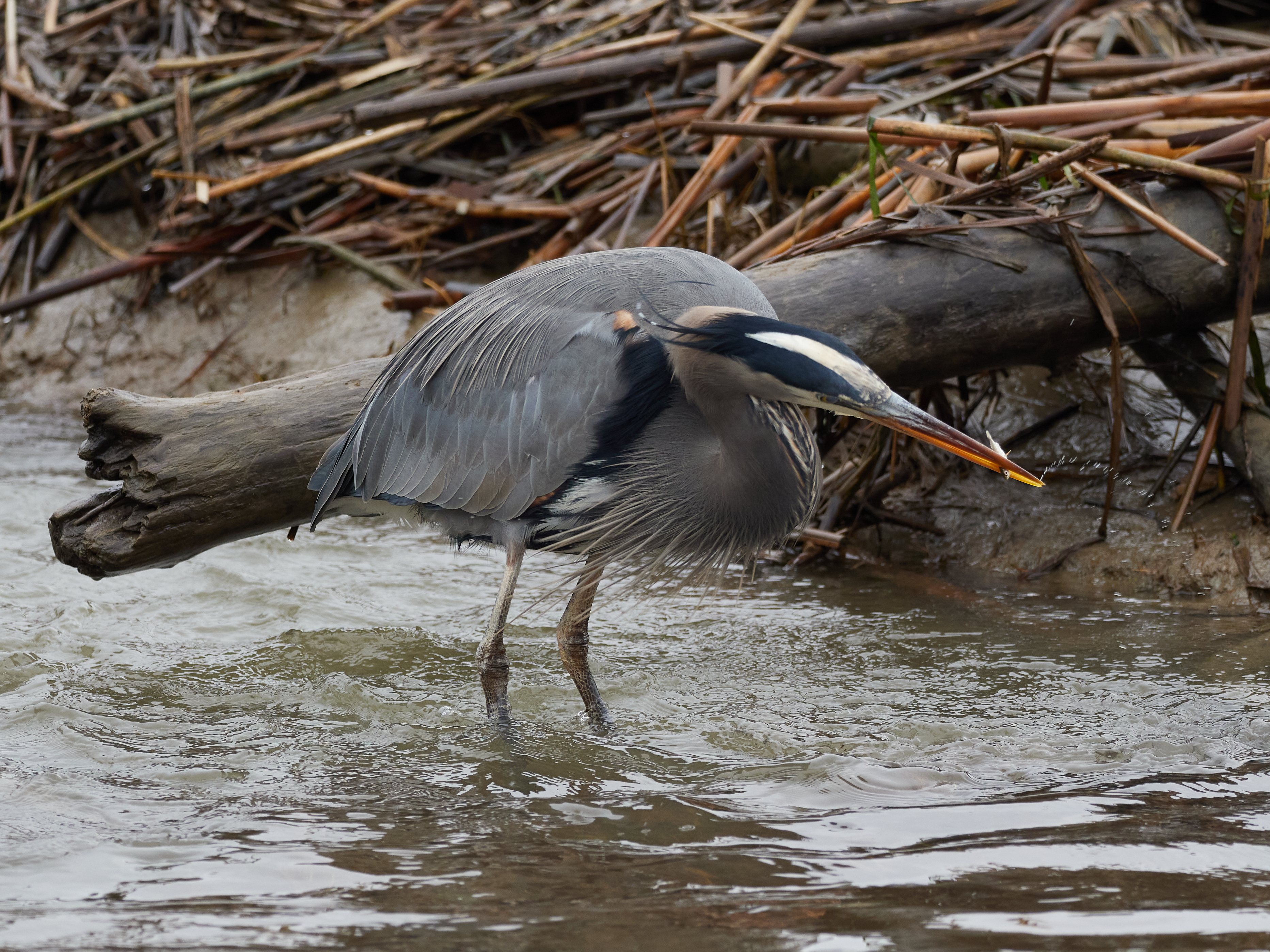 There's something magical about watching the little fishies disappear into the heron's gullet...
× 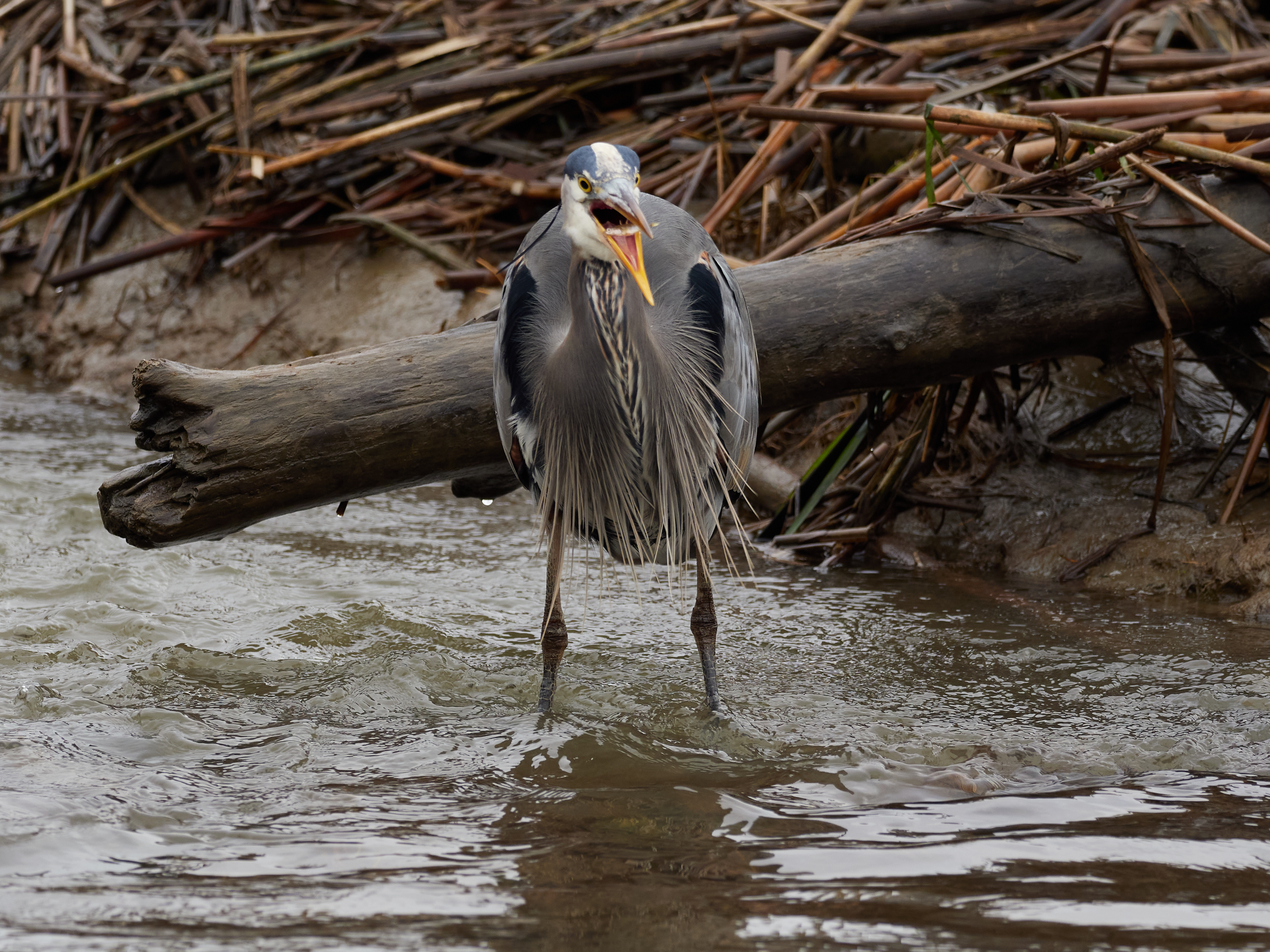 All this fish's troubles would shortly end
× 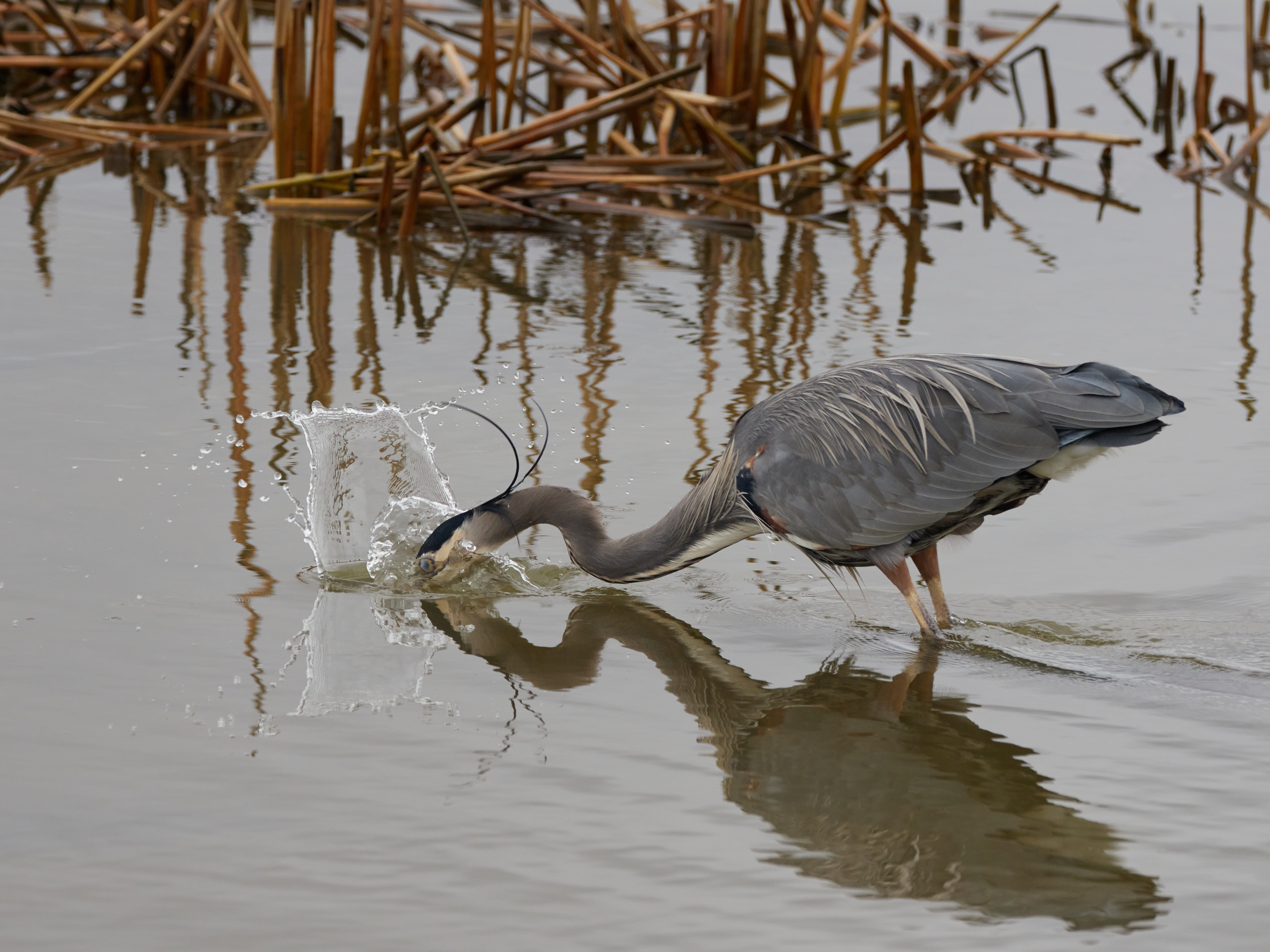 There's also something magical about this heron's hardcore hair flip

When I first spotted a heron at close distance, I was pretty mystified that no one seemed to pay 'em much attention. Later I realized just how many herons were around the area, and joined the throngs of birders in ignoring various more distant herons. 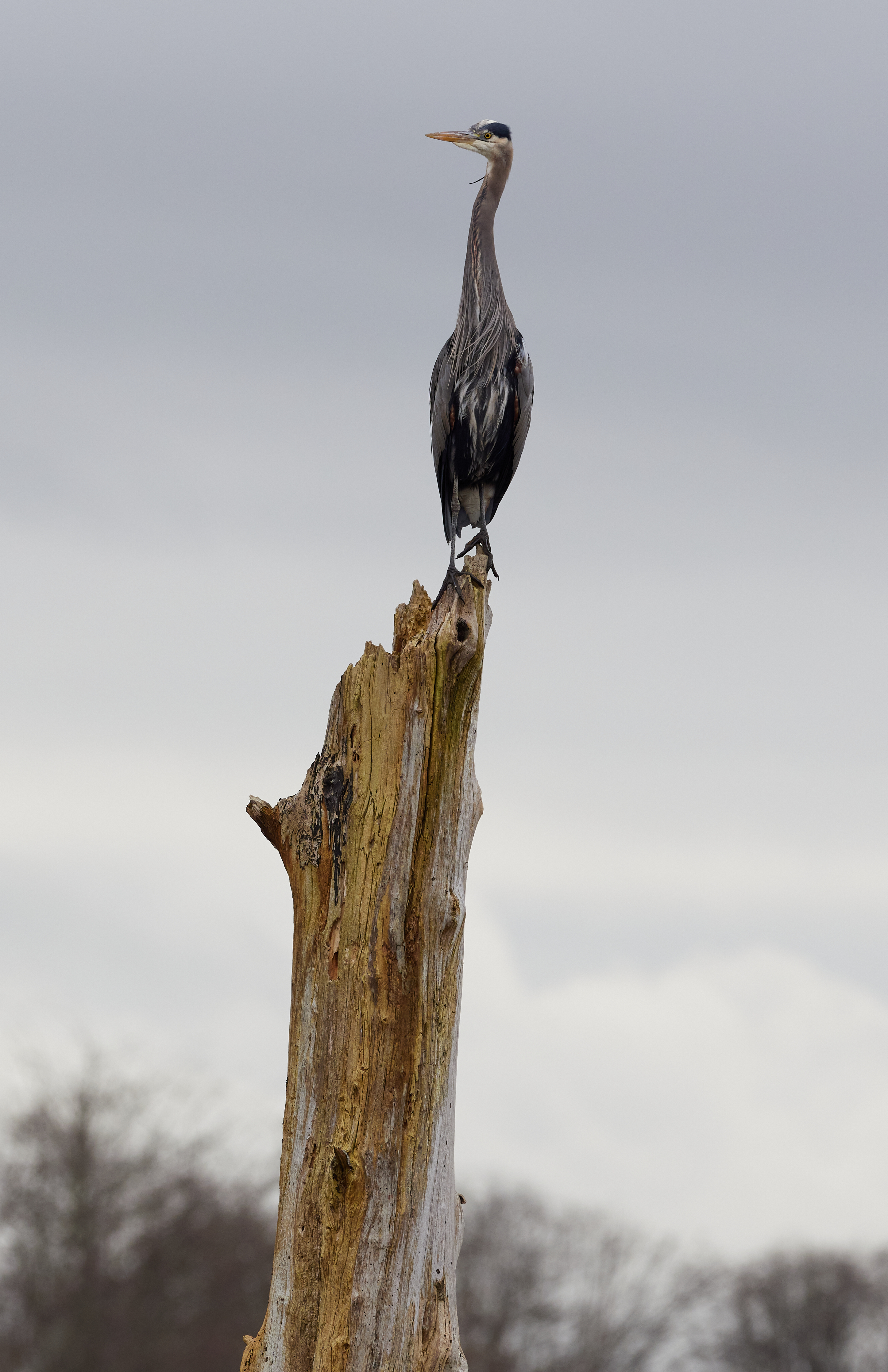 I printed an 11x17 glossy of this, which is currently next to my bed
× 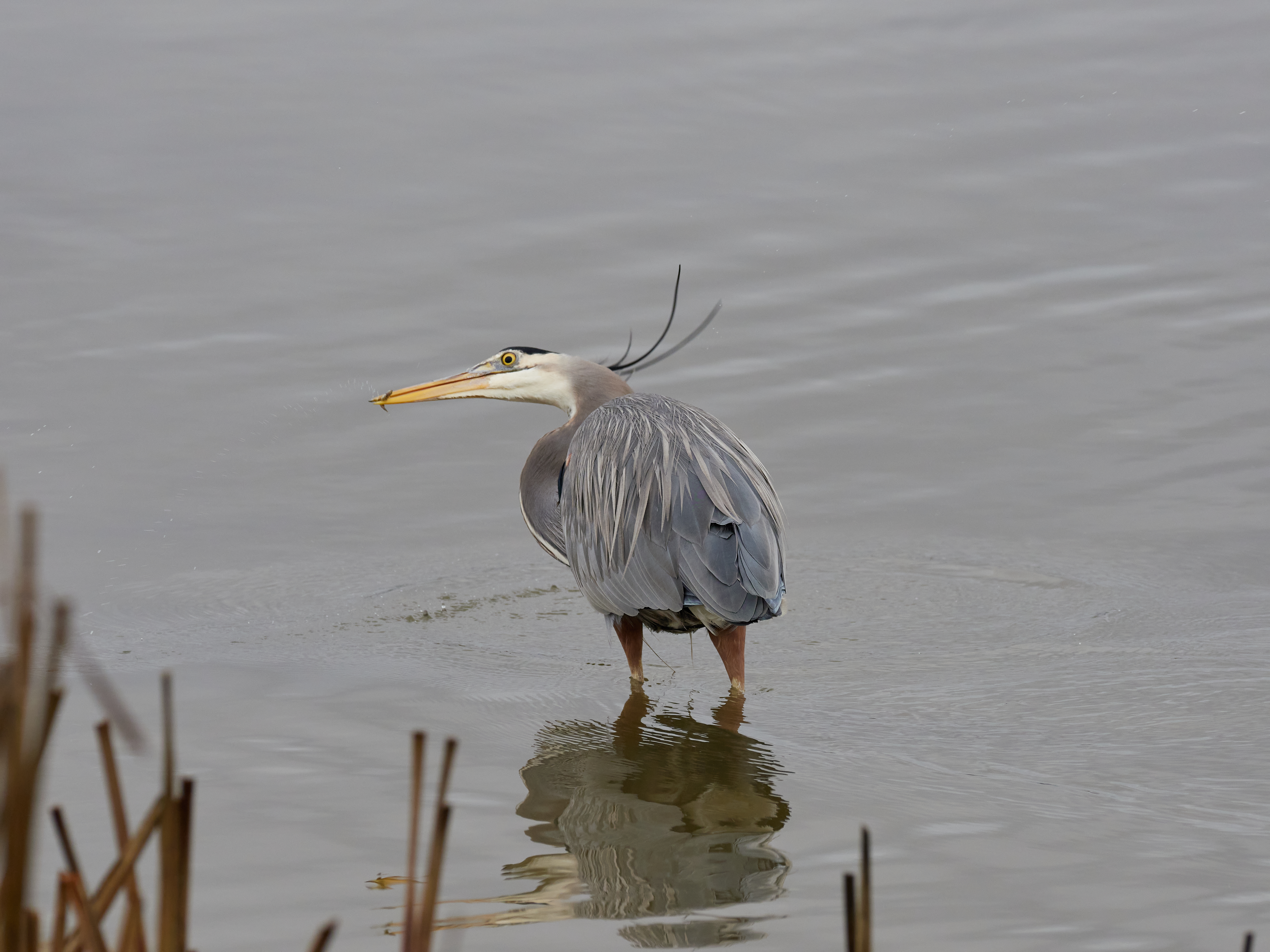 Have you ever met a more gorgeous model? I haven't!

Of course, there were more than just herons around. There were swans-a-soarin' 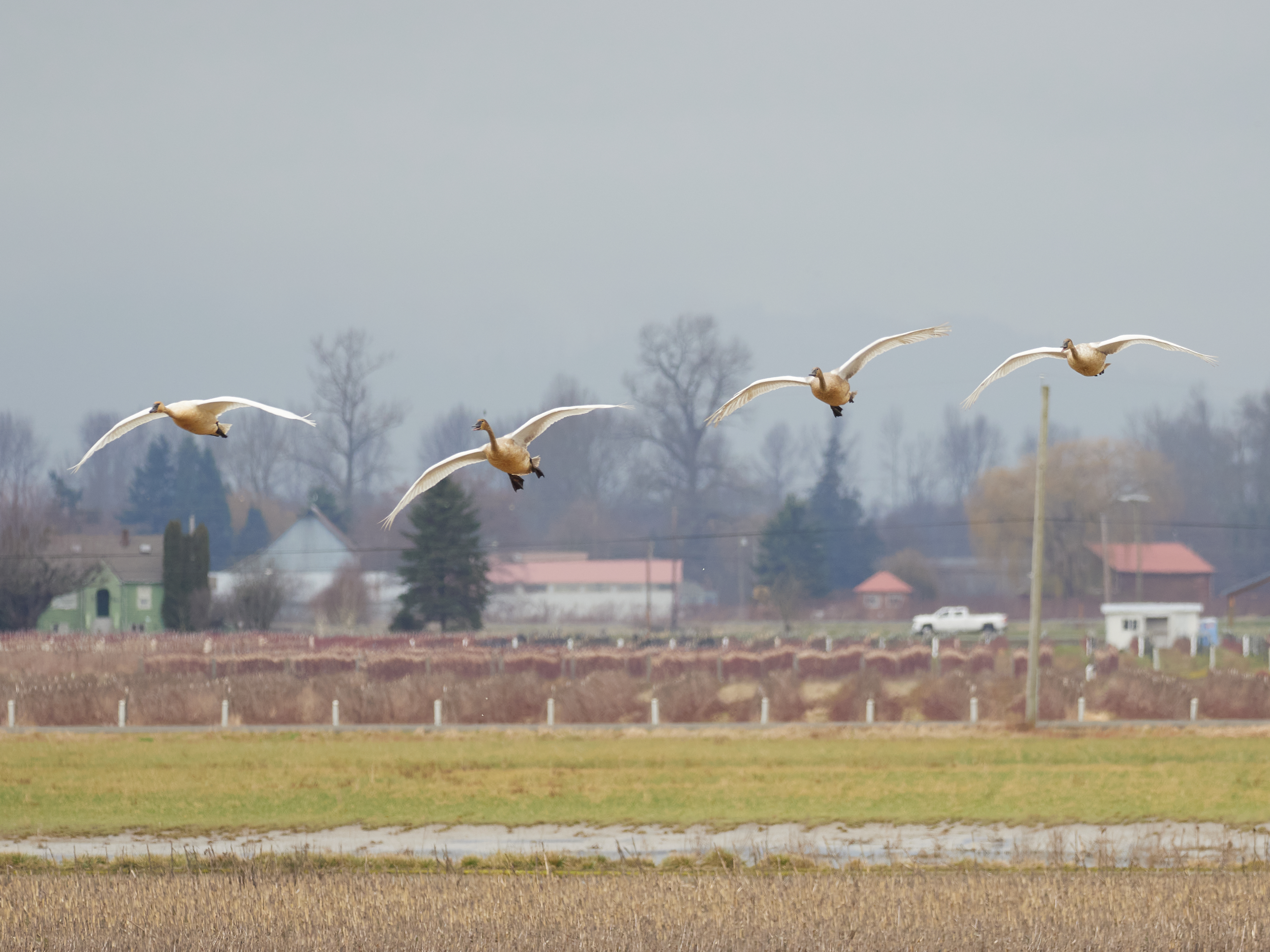 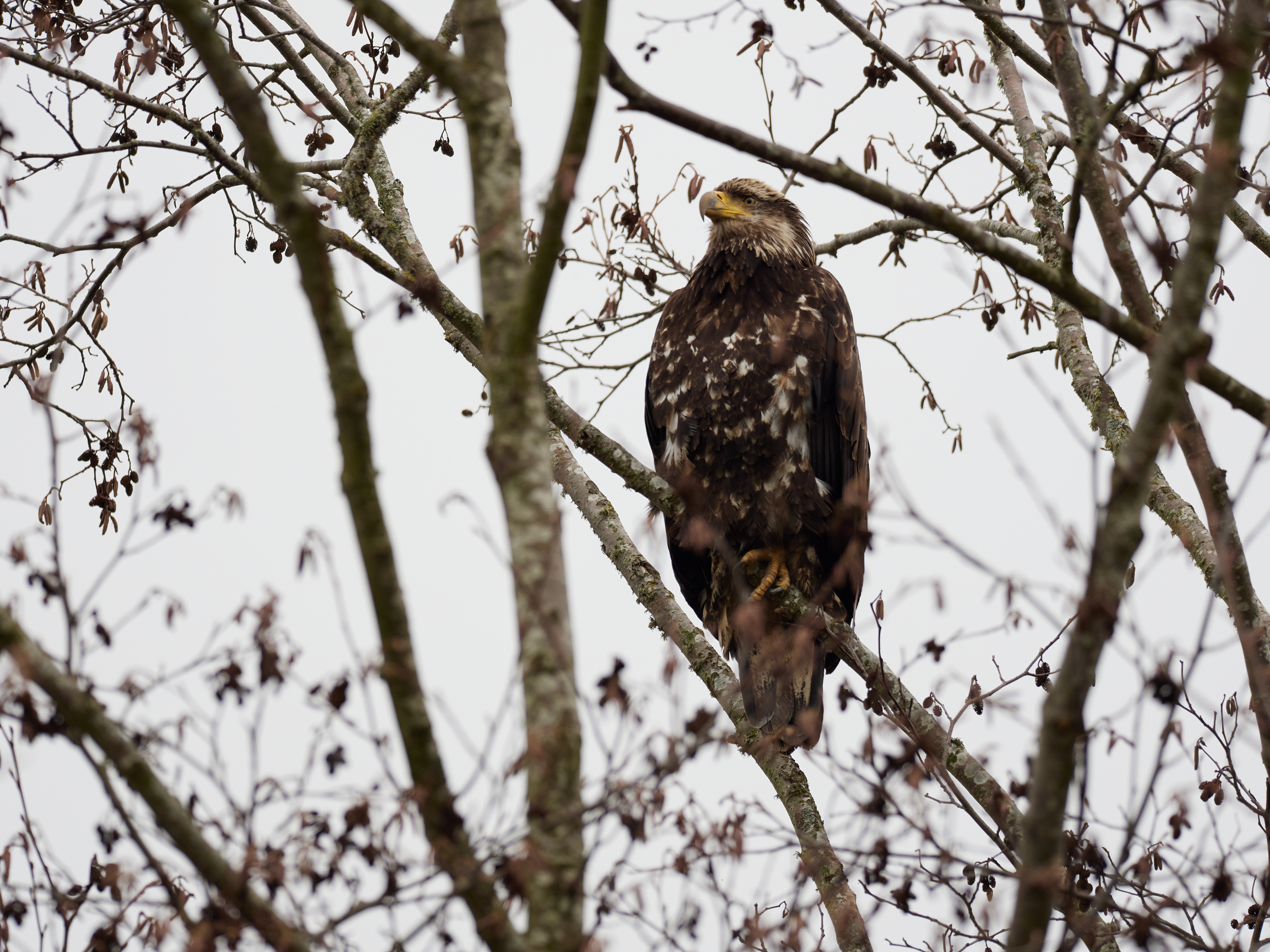 Given that this was shot with exceptionally poor lighting, and I just pushed the shadows and blacks a fair bit in post... I'm quite pleased that this washed out photo looks almost presentable. 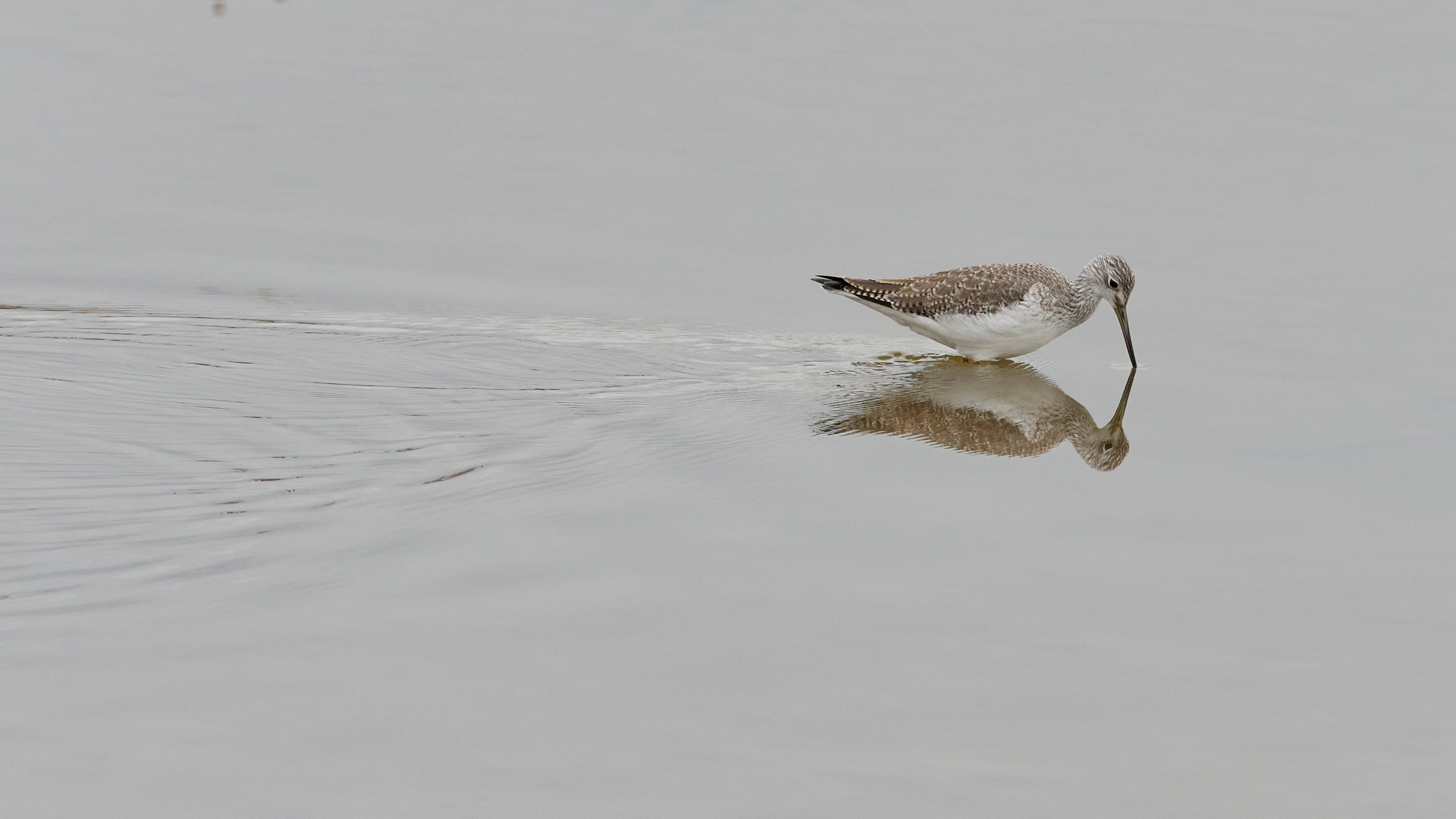 Oh, and a bald eagle in the distance. I did my best to try to get a clear shot, and I left this one totally uncropped so that you can see just how far I mean when I say far. 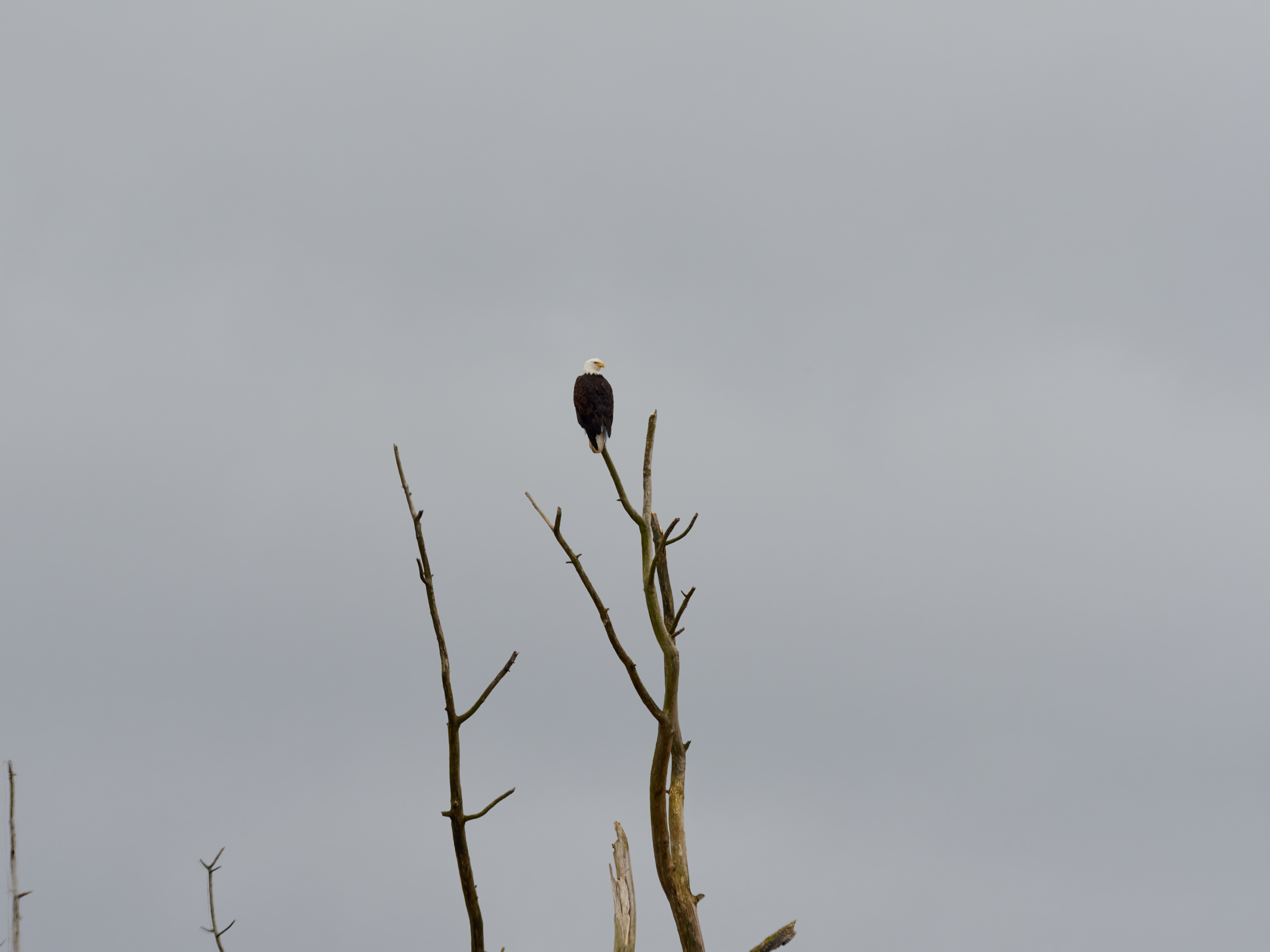 For more of my shots, and EXIF data, do feel free to peruse the full album over on Flickr.

I ventured to Greenlake for the second day of my four-day lens rental, meandering around a crowded af public park, whilst playing a game of duck duck goose. And yeah, as you can imagine, direct sunlight on a reflective surface does not make for an ideal photographic sitch. Nor does the combination of harsh direct sun and shadows. Oh, and probably the joggers and walkers would help spook birds too.

And yet, I managed to find a few spots of beauty that others overlooked. 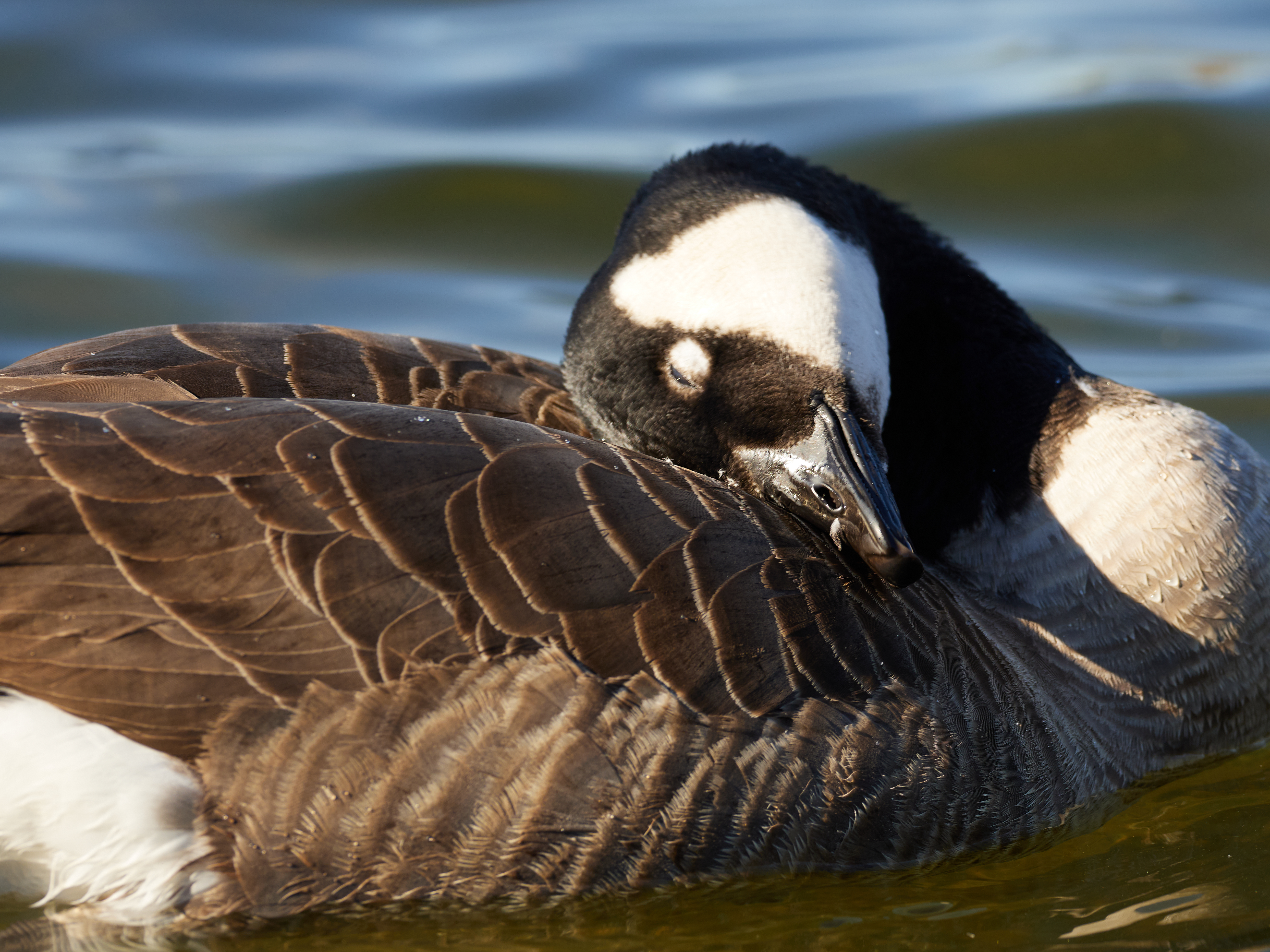 Being permanently at 300mm means that the intrepid photographer gets to get super close to their subjects without necessarily being that close.
× 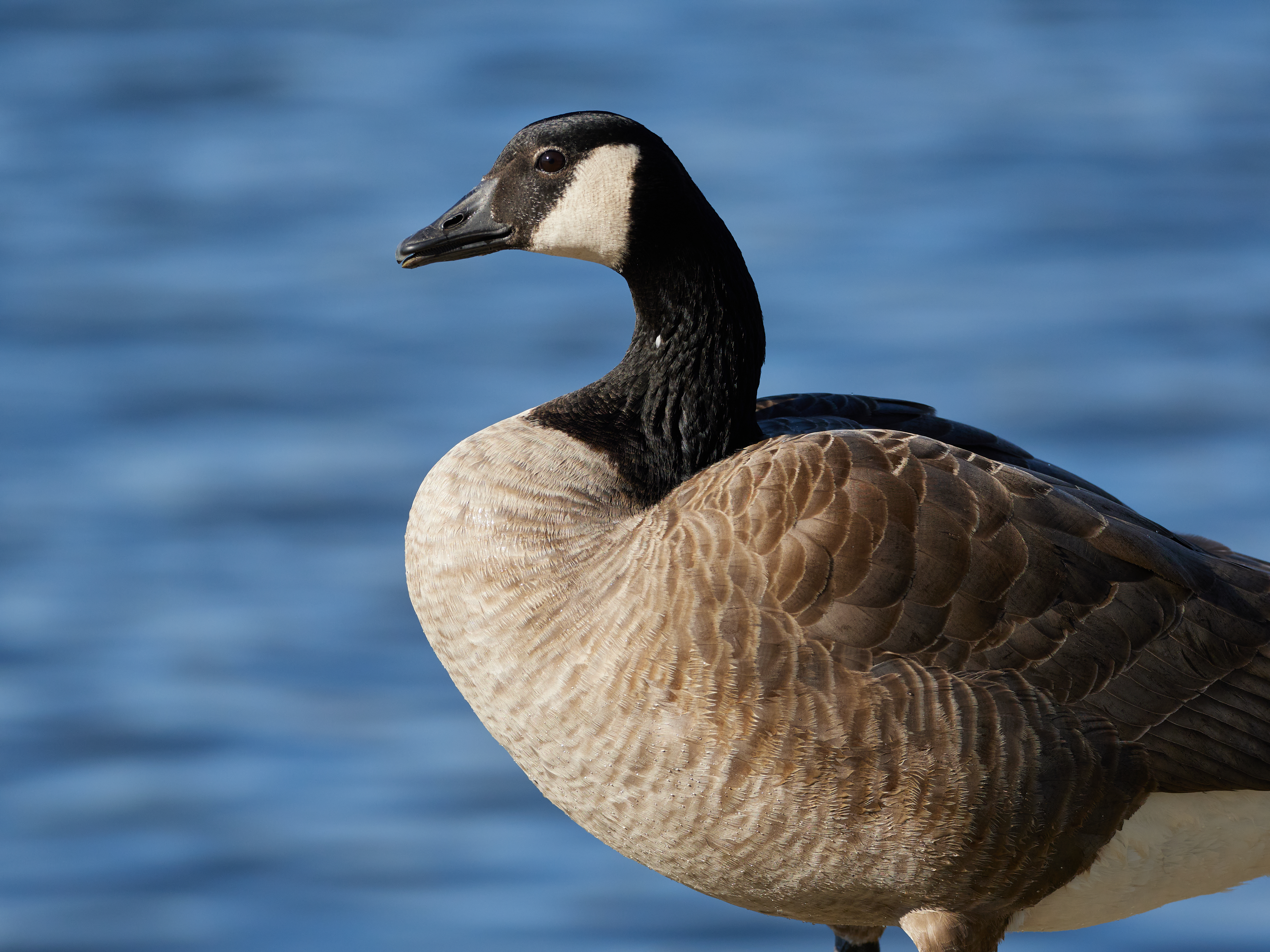 On the one hand, geese are boring. On the other hand, this goose is SHARP
× 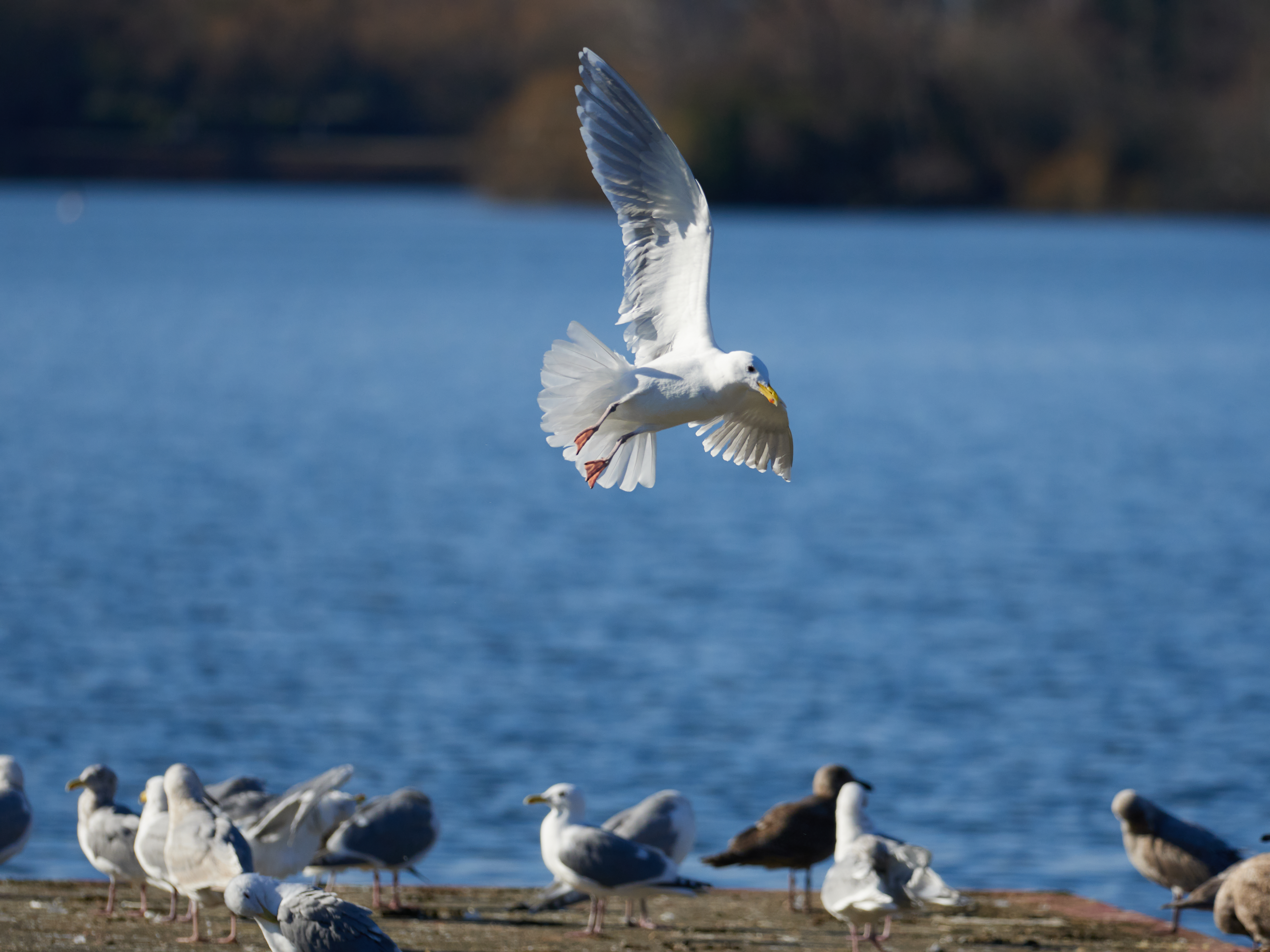 A gull comes in for a landing
× 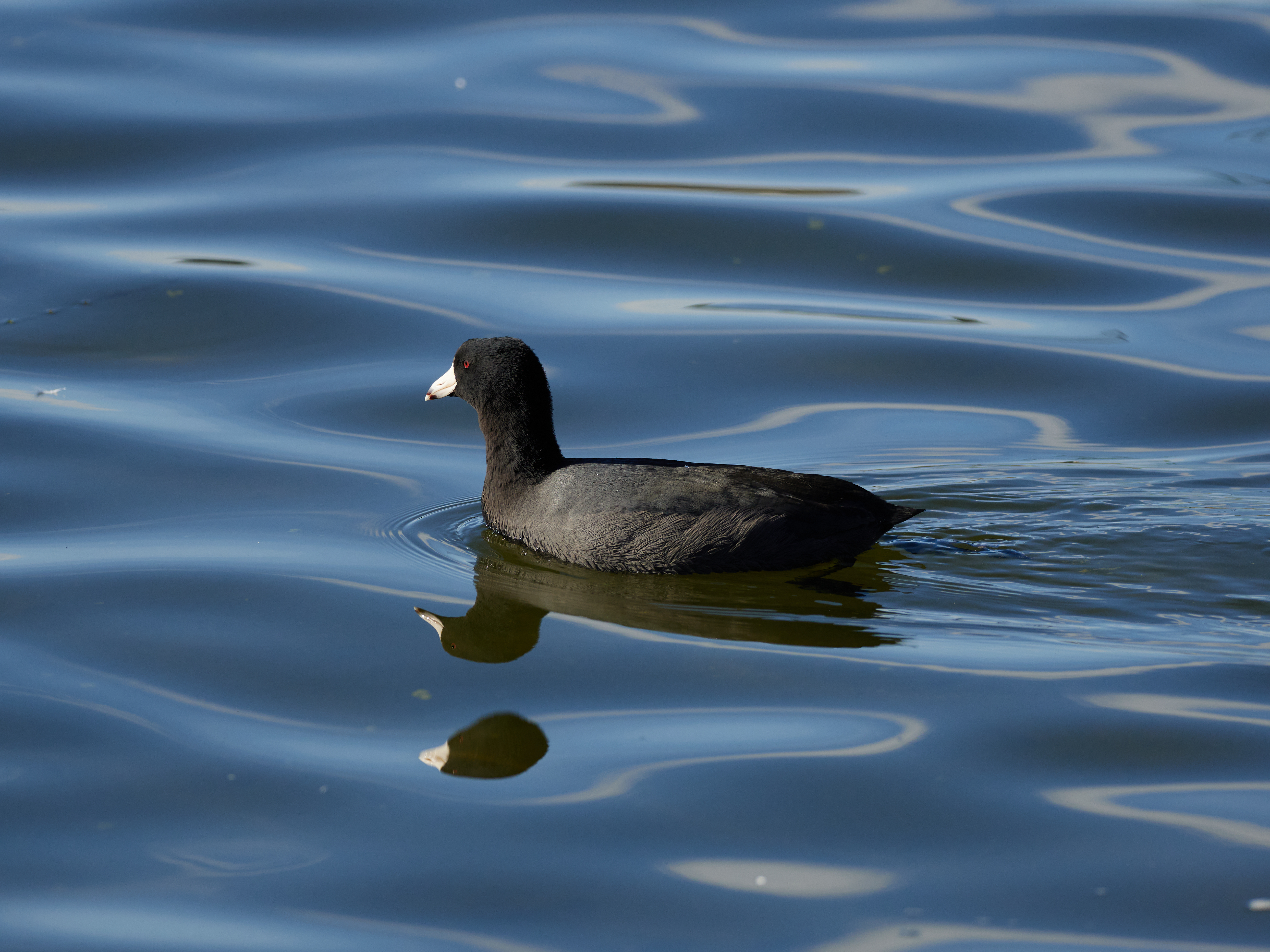 A coot bobs around
× 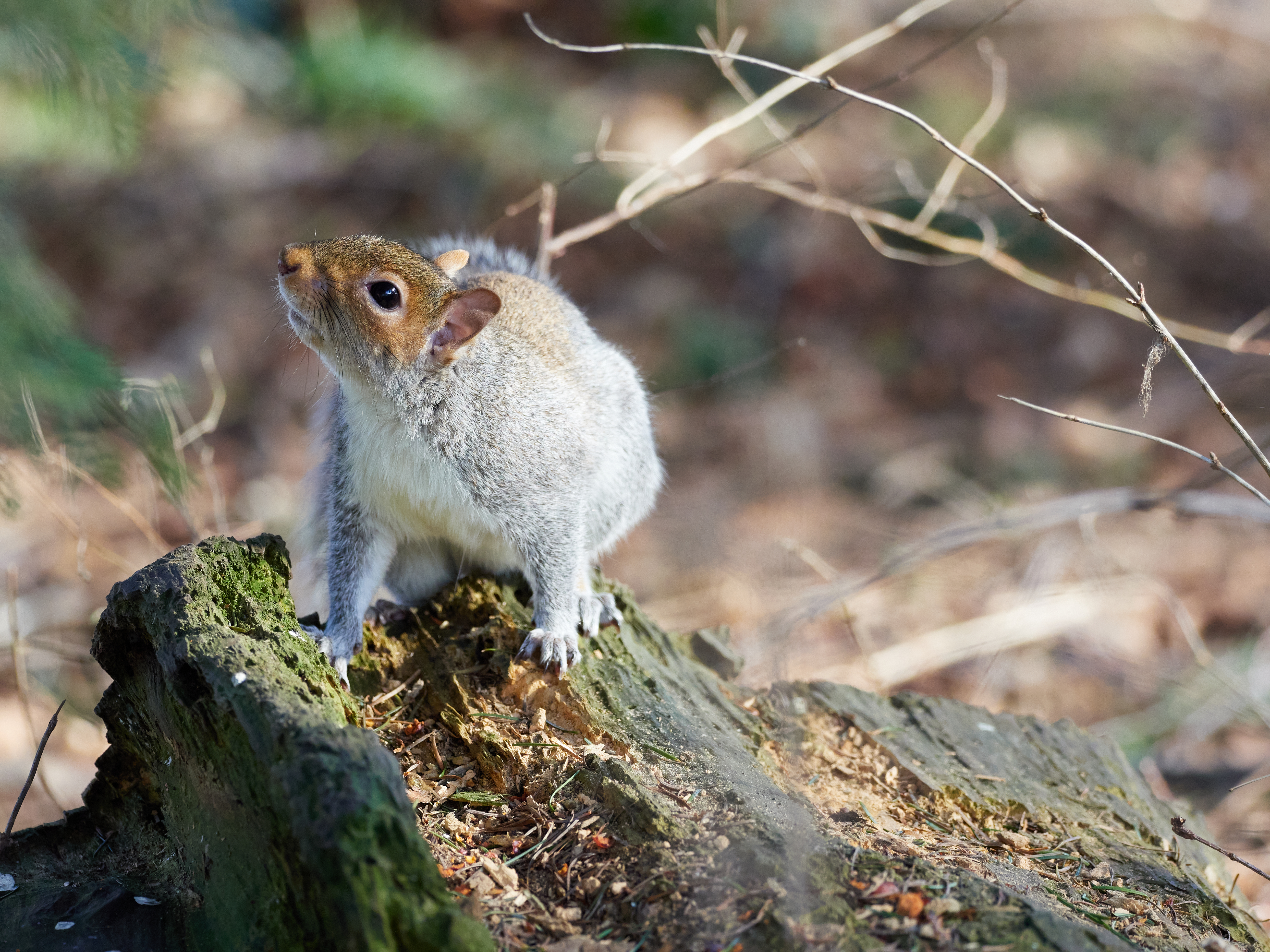 But, of all the things to spot, in a wooded patch, I noticed a hummingbird, high above my head. I almost thought it was a leaf at first, but I thought it was worth taking a photo. These are heavily cropped, and passable photos with a bit of editing. 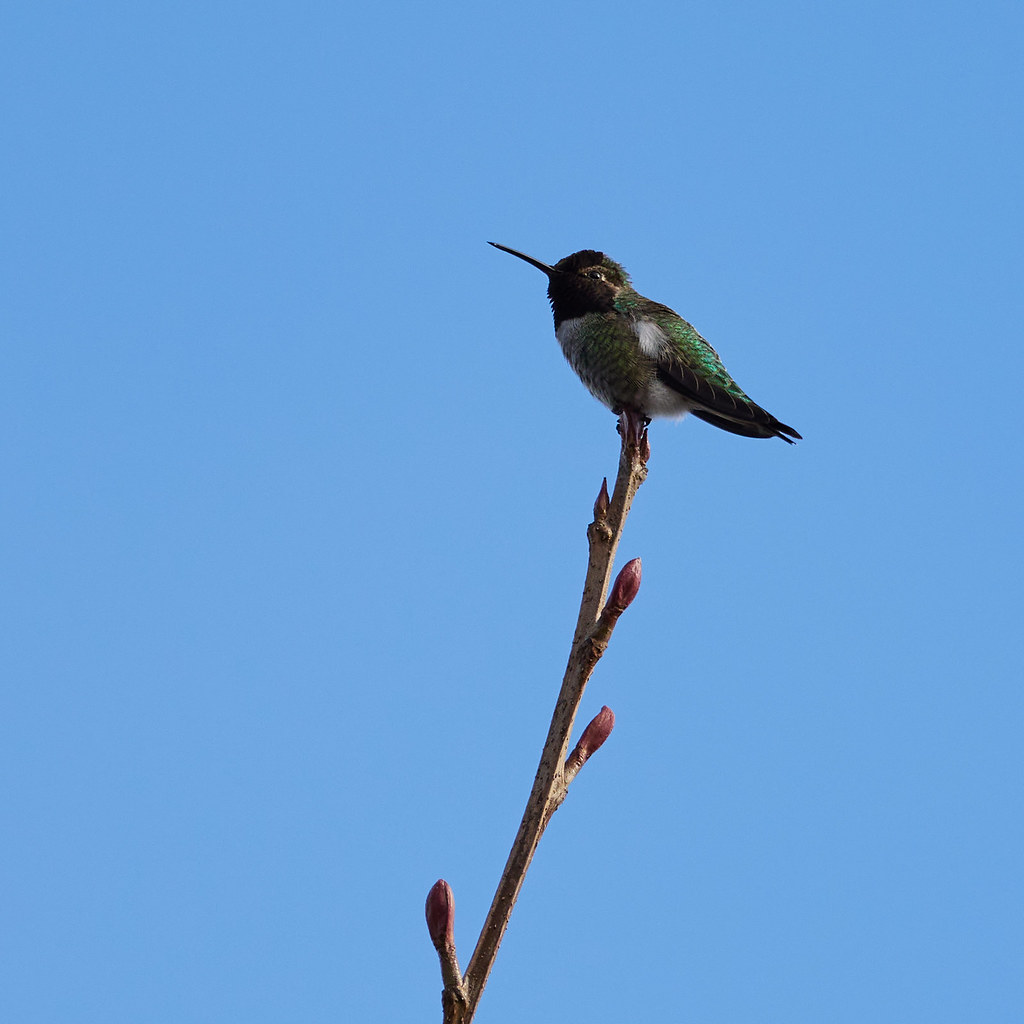 Specifically, it's an Anna's Hummingbird, one of few species of hummingbird to take up winter residency in the PNW. You see, it's native to Baja California, but as humans started cultivating "exotic plants" further north, its range increased. 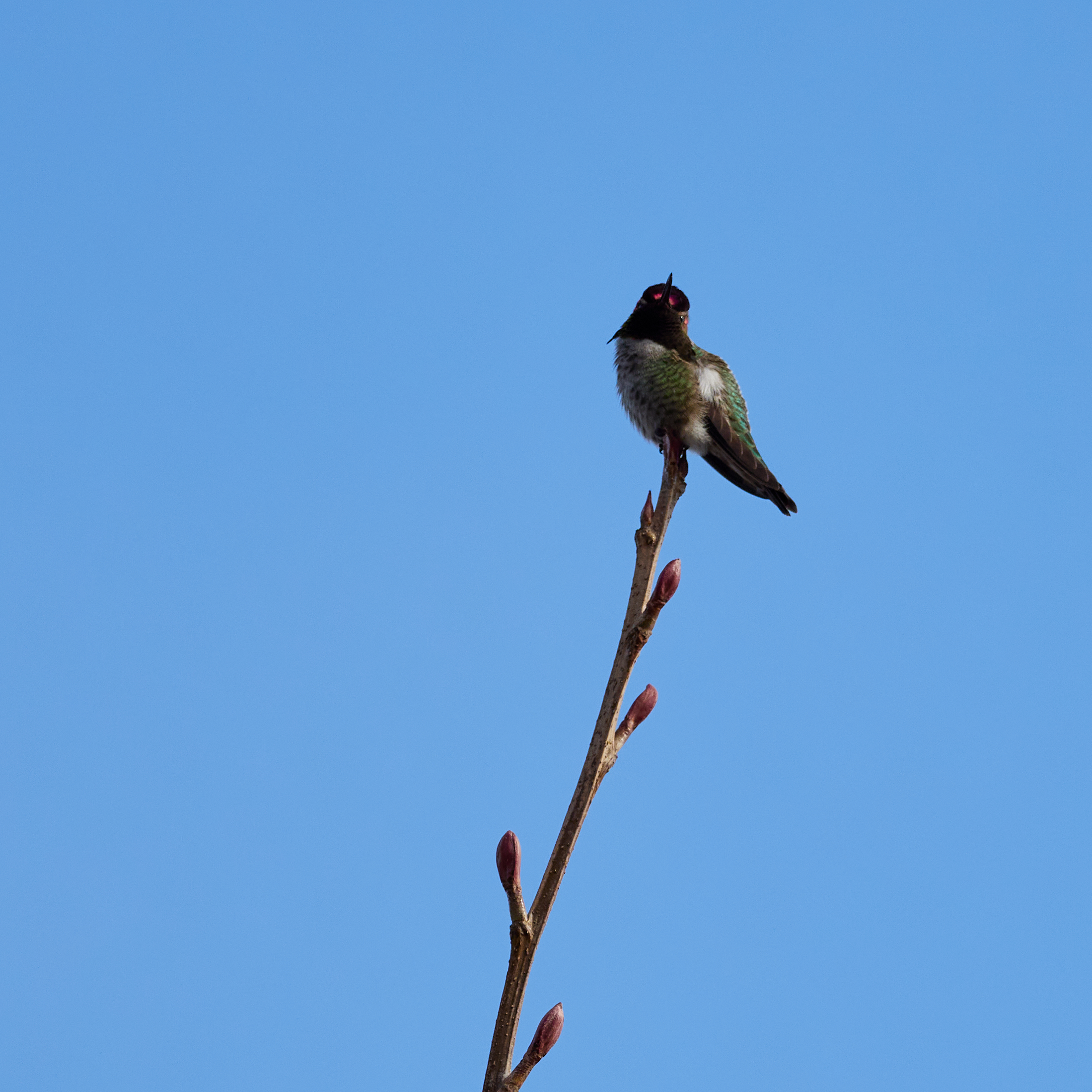 I'm blown away... both by the lens and the hummingbird

For more of this sort of thing, check out this Flickr album.

After Greenlake, my next stop was Discovery Park.

Unfortunately, it was a workday, and I didn't give myself enough time to explore the parts of the park teeming with wildlife. So, I can only offer these photos of Brown Creeper. (And as always, note that there are more in this album.) 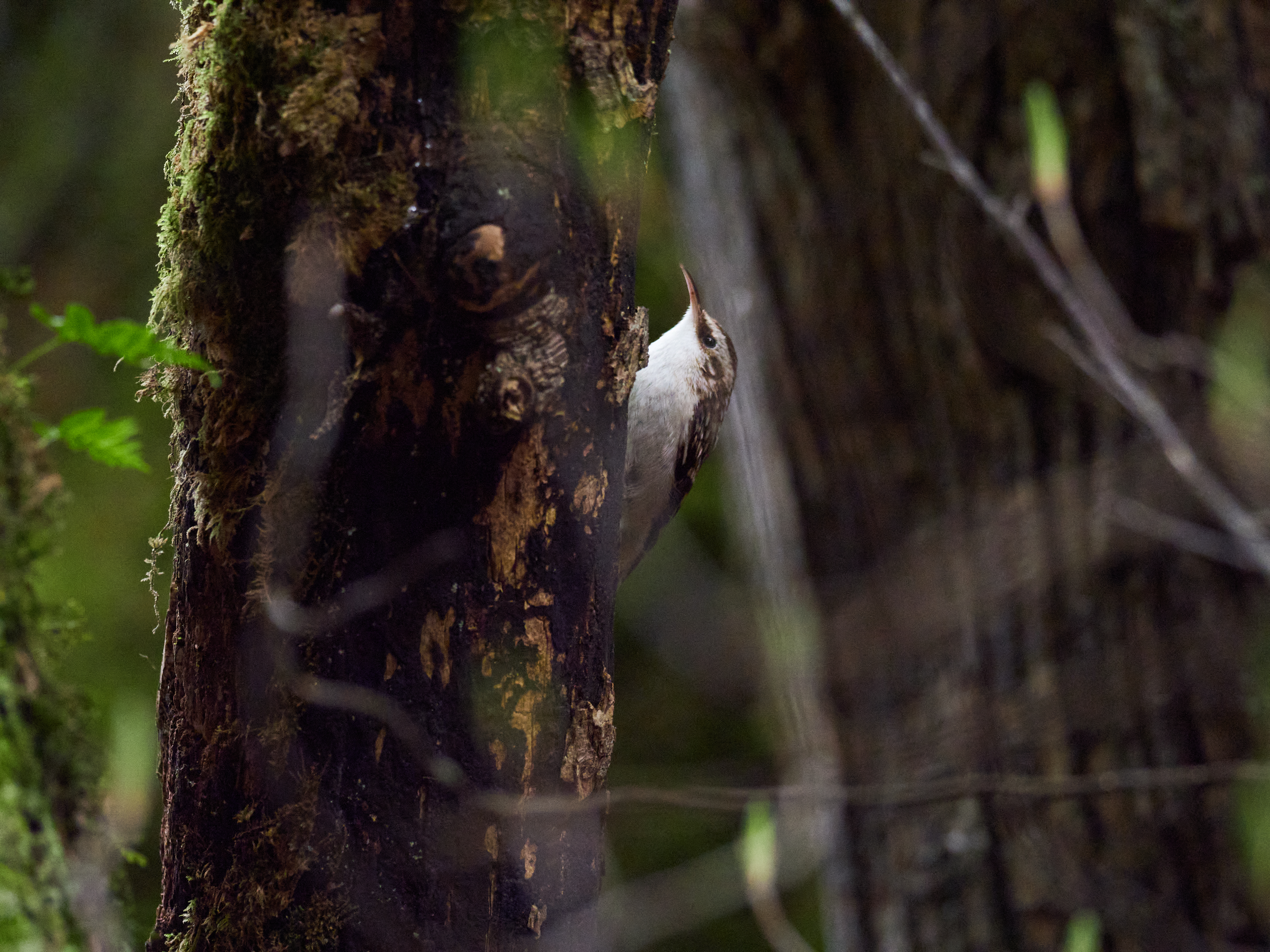 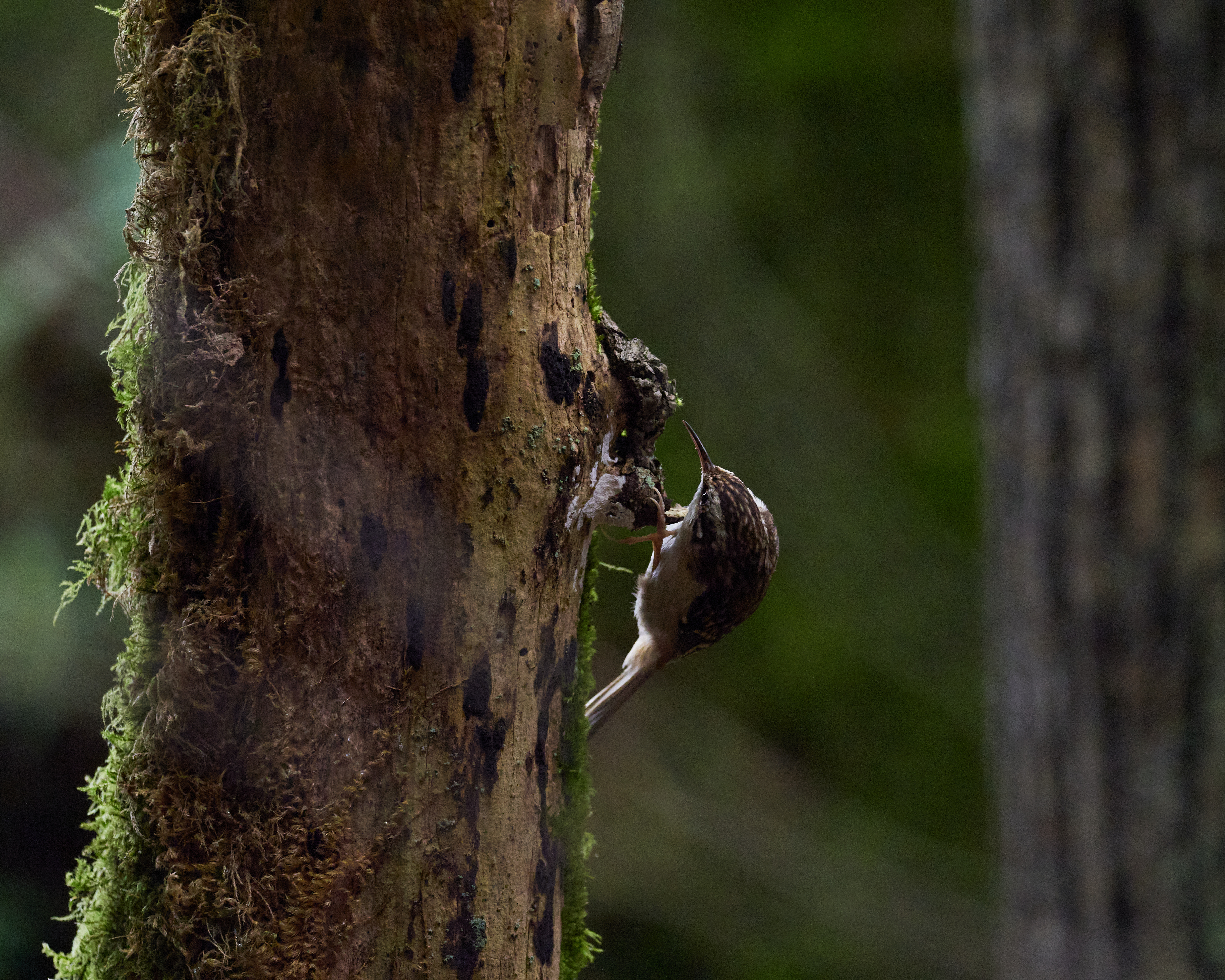 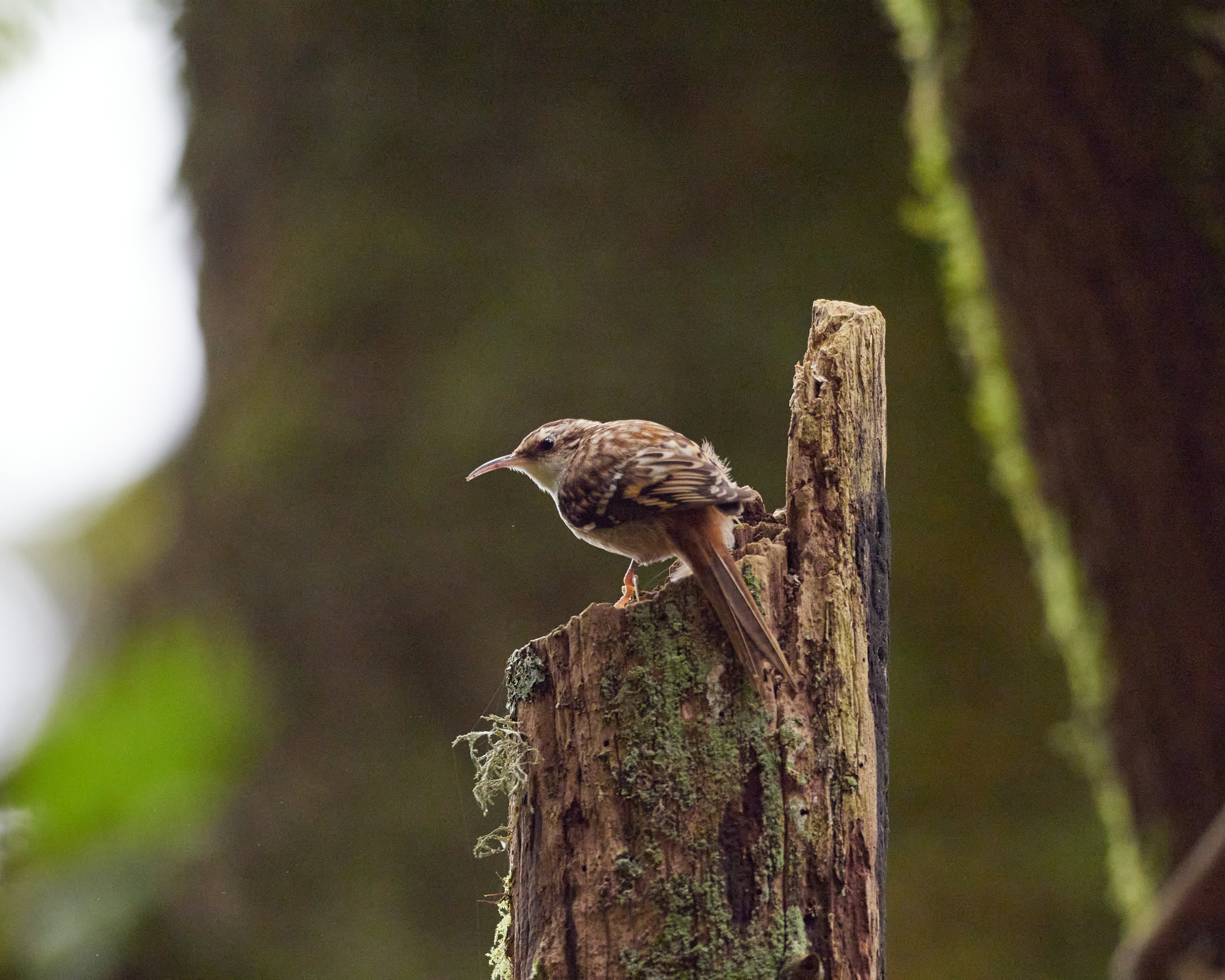 I was skeptical of the Audobon Bird Trail, or heron trail in Marymoor Park. It starts right between an area for flying drones and hobbyist aircraft, and an off-leash dog park. I can scarcely think of a more uncomfortable setting for birds, except maybe an off-leash cat park.

That said, much of the trail does get sufficiently far from those two things, and meander in its own board-walked way through some wetlands and towards a beautiful view of Lake Sammamish. 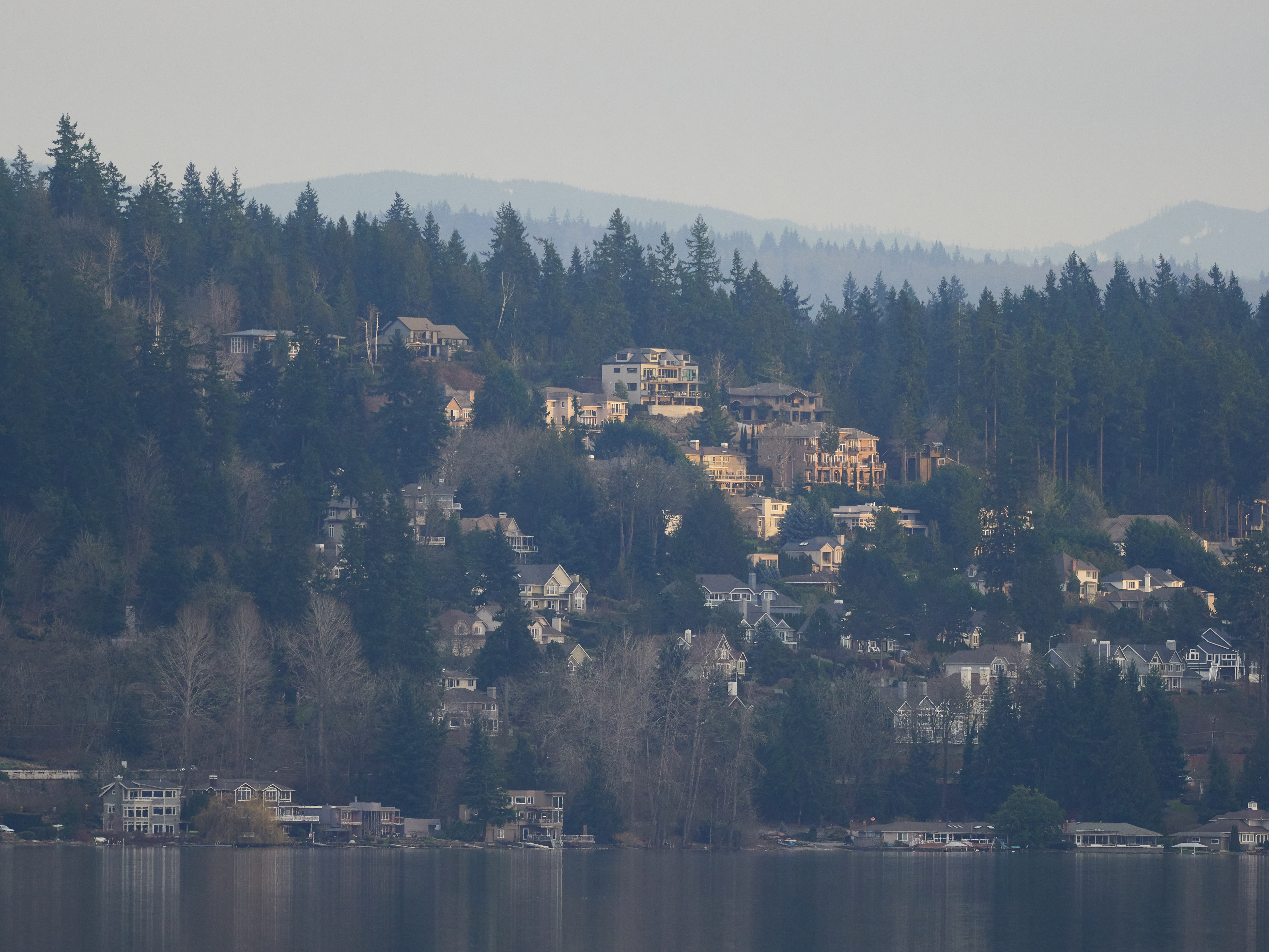 View off Lake Samamish (at a 600mm equivalent)

After that, the trail loops back through the damn off-leash dog park, and as I'm not really interested in walking around a bunch of dogs whilst trying to spot birds, I quickly decided it was more worthwhile to go back the way I came.

Near the start I ran into what I suspect is a ruby-crowned kinglet. (Minus the ruby crown.) 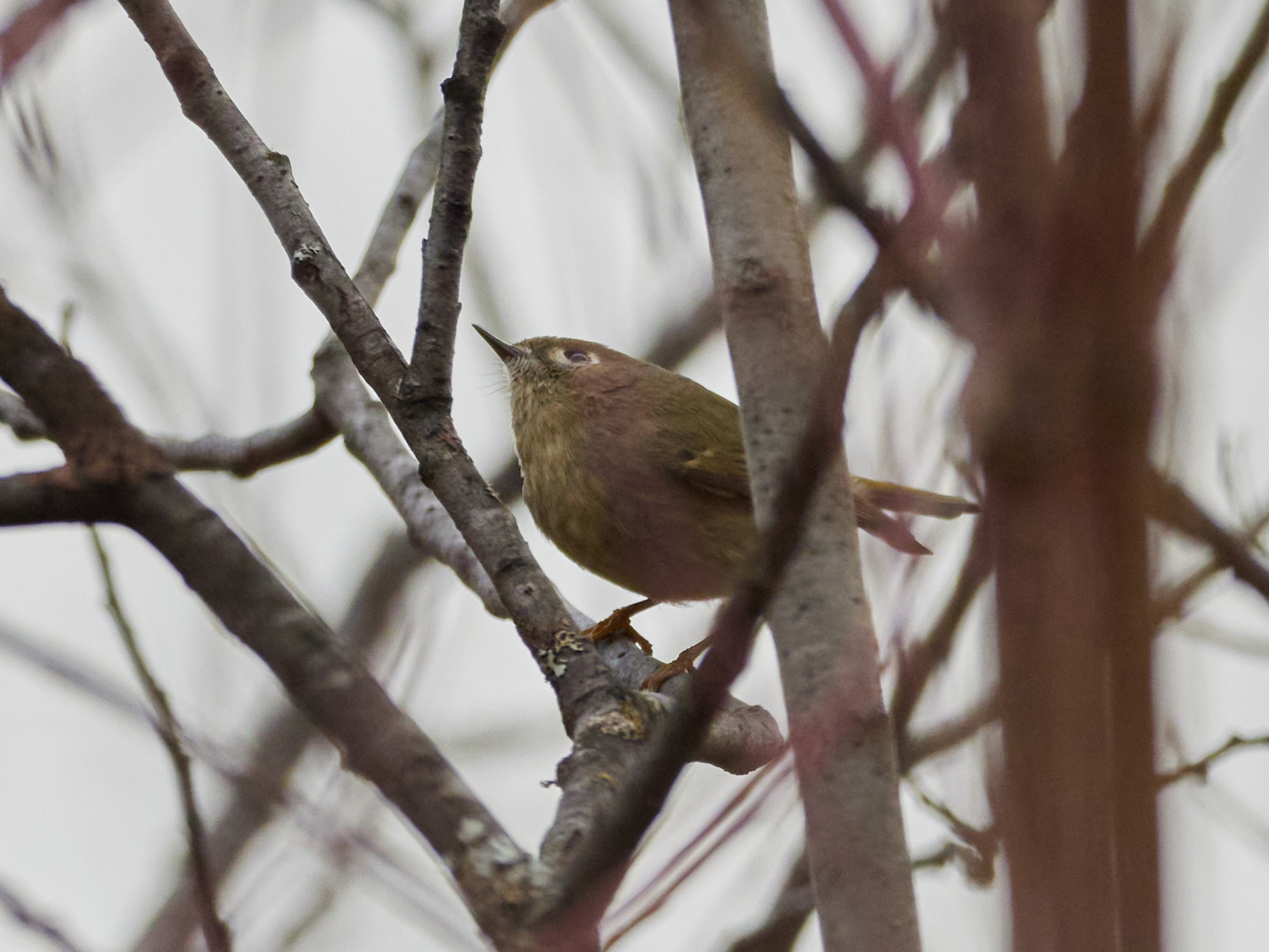 Shortly thereafter, lots of waterfowl. Mallards, coots, herons up in the distant trees, and eagles beyond. 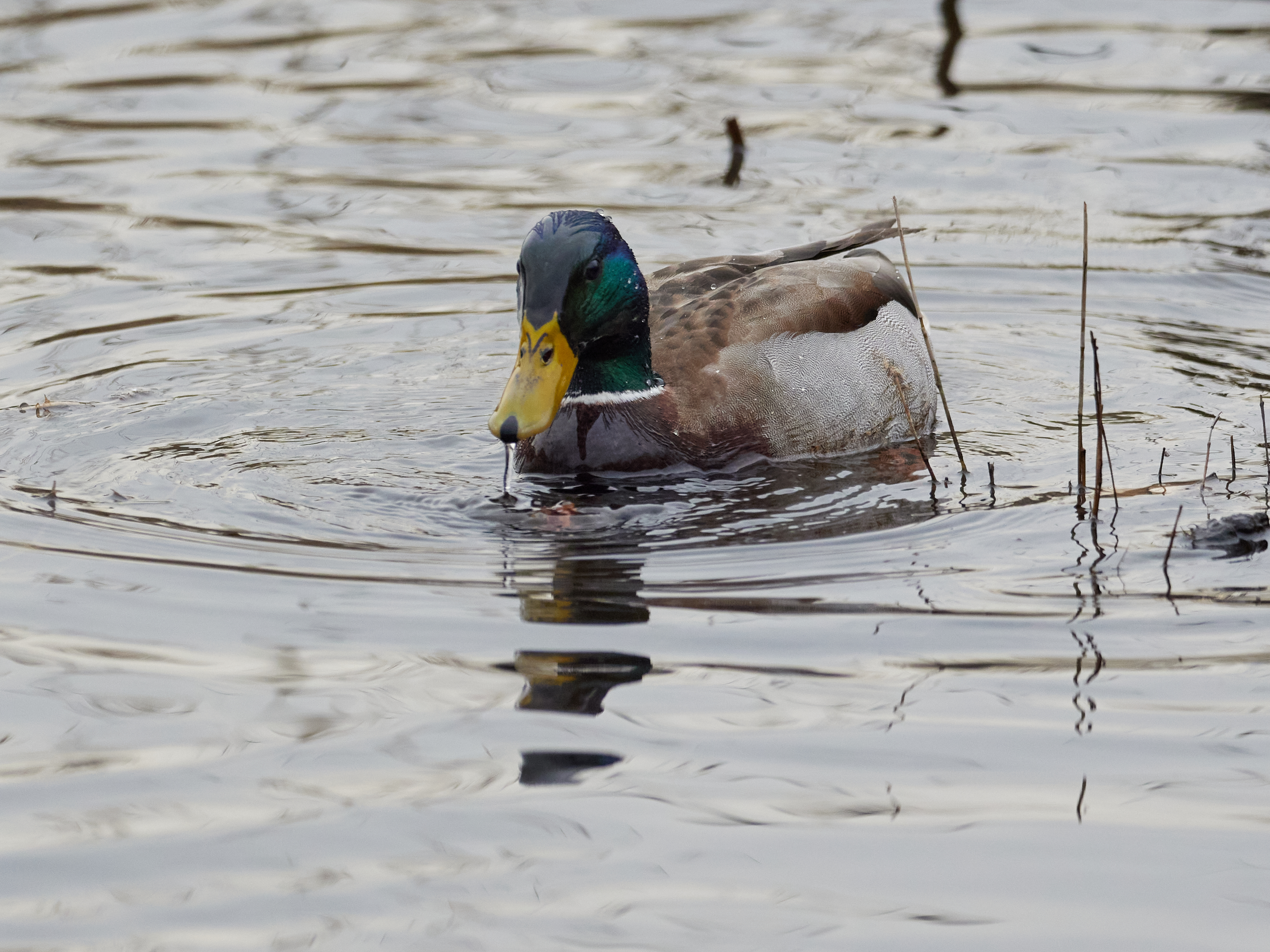 Sunset was approaching, and the coots were somehow even more startled by the imminent approach of a crew team than I was at the approach of a few unleashed dogs. 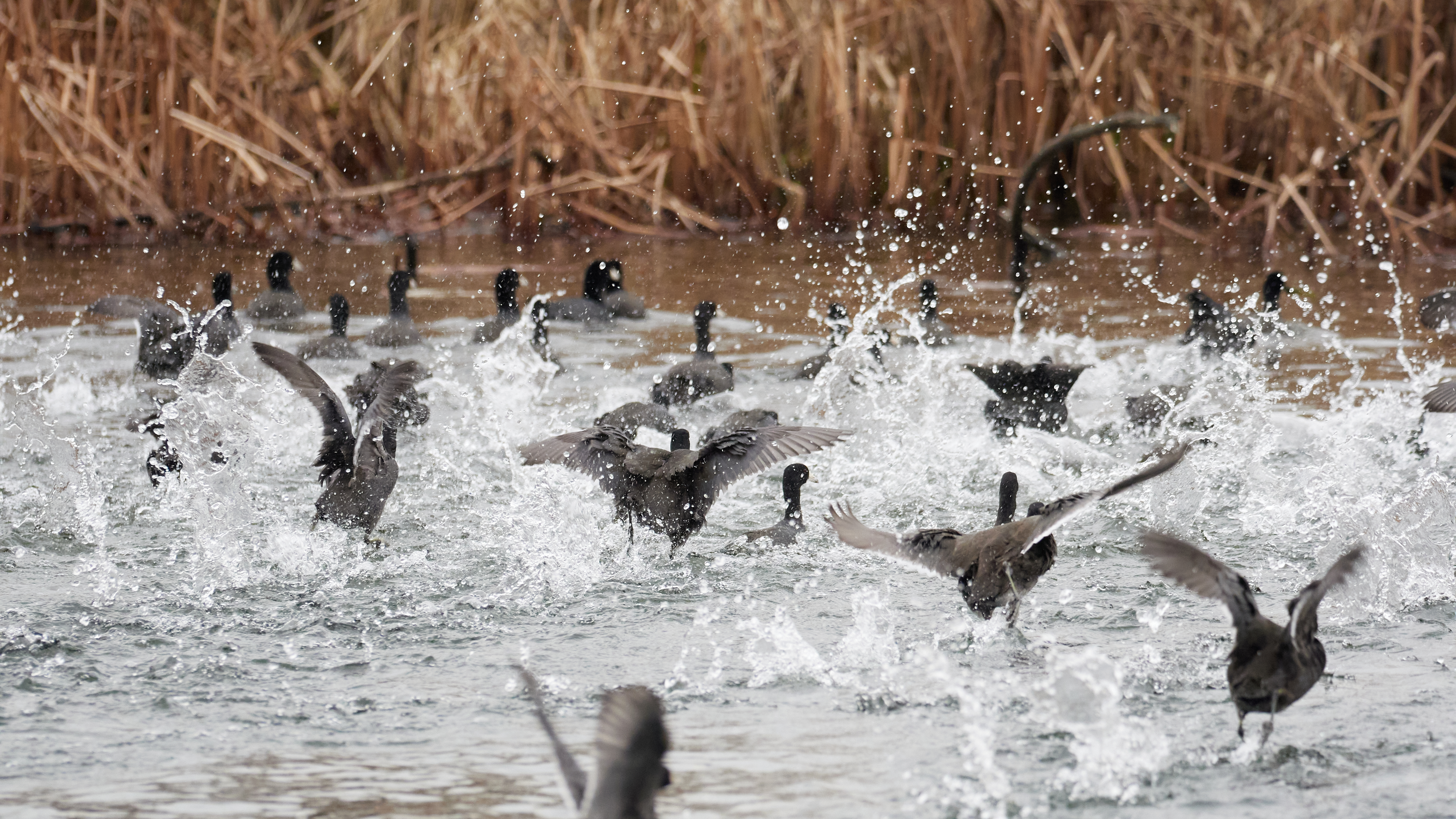 I meandered back to my parking space, snapping a photo of two flying birds, shadow black against the darkening sky... and yes, they were bald eagles. 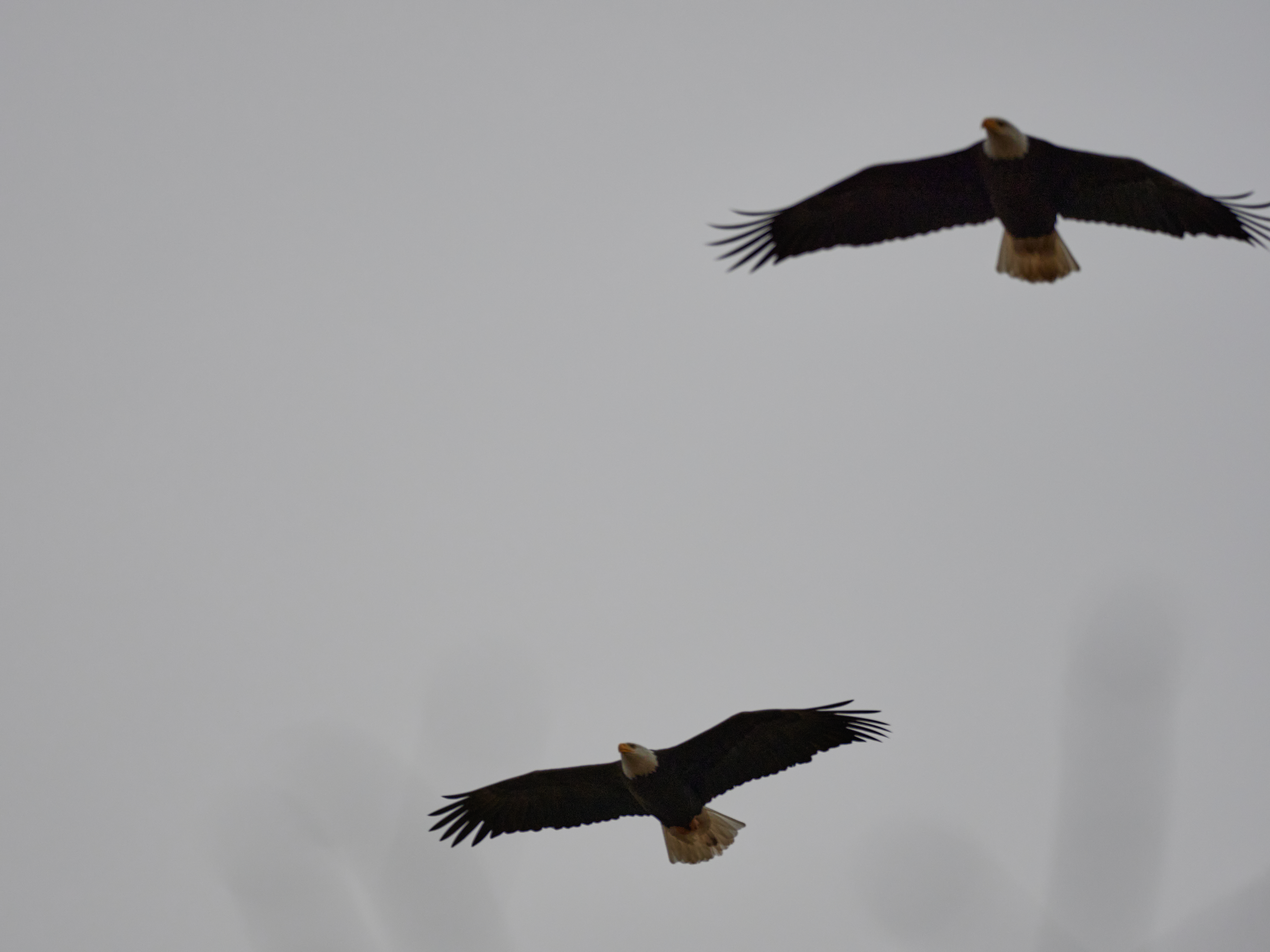 (And as ever, more photos are on the full Flickr album.)

I reached by car, and drove straight back to Kenmore Camera. With a heavy heart, I returned the lens.

...and promptly listed a bunch of stuff on eBay.