Ohio was dubbed "the hypnotic state" by my friend Jim. As I drove down miles and miles and miles of Ohio interstate, wondering when I'd get to Indiana, I couldn't help but feel hypnotized by this Buckeye-shaped state's corn laden US highways...

Backing up for a minute -- I do have to say that I found my time in Ohio rewarding. I think I would probably enjoy spending some more time exploring the state.

On a quick passer-through I had to pick and choose my stops, and I daresay I chose wisely... This post covers the first four out of five stops, the last being reserved for its own post.

I took the Fort Pitt Bridge out of Pittsburgh. For the first time, I got to be the one driving this confusing and dangerous roadway with illegible signage. That said, it really wasn't so bad.

It was only once I hit Ohio that I started to be worried about the roadways. You see, they had a few signs up that said "Your Next Text Could Be Your Last," so I had to text my mom and let her know I loved her. Just in case.

My first stop in Ohio was Newark, which is home to a number of ancient Native American mounds, constructed between 100 BC and 400 AD.

Some were famously and controversially chosen as the site for a golf course, so conservationists are waging some thorny battles to hopefully remove sandtraps from ancient mound walls. The Great Circle Earthworks, however, are preserved in a park that seems like it is mostly used as a great place to walk your dog.

A giant mound of earth may not sound like the most impressive sight in the world, and I don't think I photographed it in a way that impresses, but there is a serious grandeur here. The walls are tall and steep. The trees growing within are mature. There is a sense of scale and history. This survived to present. 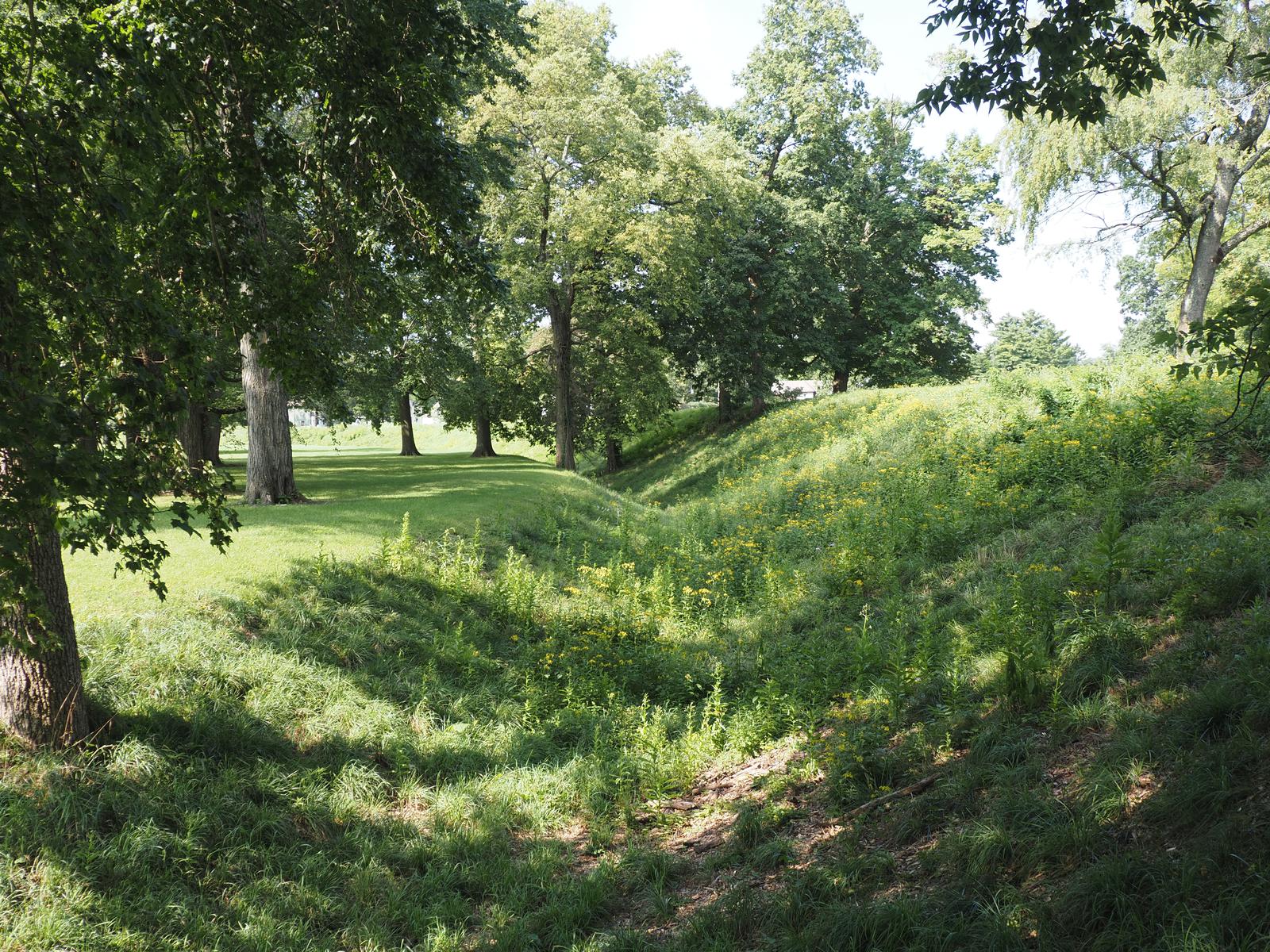 The Great Circle Earthworks is also home to a small museum, though it was closed thanks to the pandemic. Mingling outside of it were some rather conservatively dressed women with what looked like name badges. I walked over, and they complimented me on my glasses. They were not employees of compound.

Their badges in fact identified them as missionaries for the Church of Latter-Day Saints, one a transplant from Idaho, the other from Utah. They told me that though it is apocryphal, there are LDS members who believe that the Earthworks were the setting for various events laid out in the Book of Mormon.

And so it goes, that this place is potentially twice sacred.

Of all U.S. cities that I've visited, Columbus is the one that most felt like a giant set of suburbs, and the least like a cohesive urban center. It is quite large, yet it feels less like a city than the smaller Cleveland. Its claims to fame include hosting the headquarters for a variety of insurance companies, and the fast food chain Wendy's, as well as a nice position on the Sciota river.

Nothing so precious as an unicorn (sponsored by the insurance company, or similar)
×

Its truest claim to fame though is that my pal X!an is amongst its denizens, having relocated during the pandemic for a graduate program.

Together, we admired the art of downtown, which features a mixture of giant advertisements for alcoholic beverages, beautiful street murals, and a park with small corporate-sponsored statues of mythical animals. I'm not kidding! 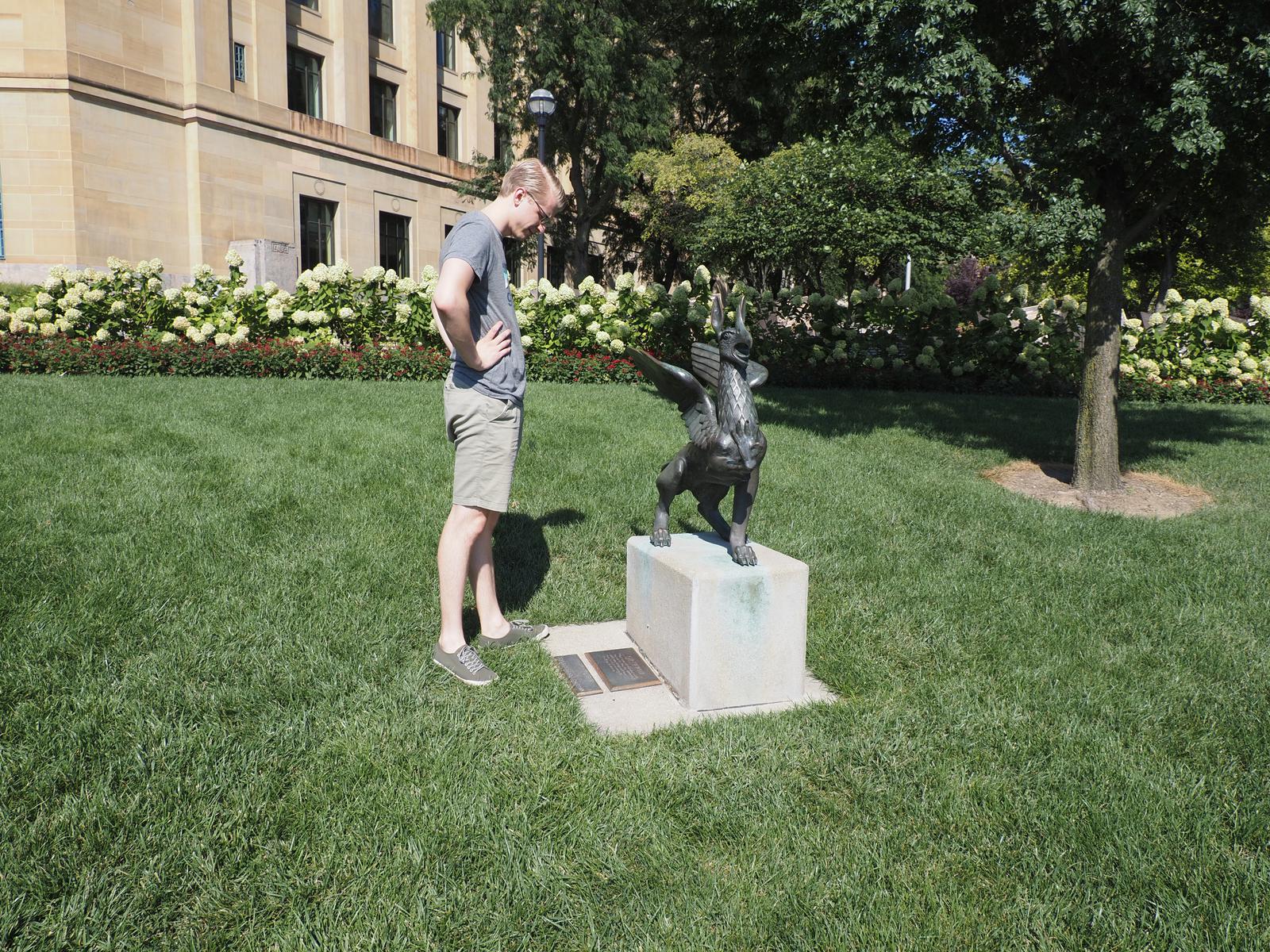 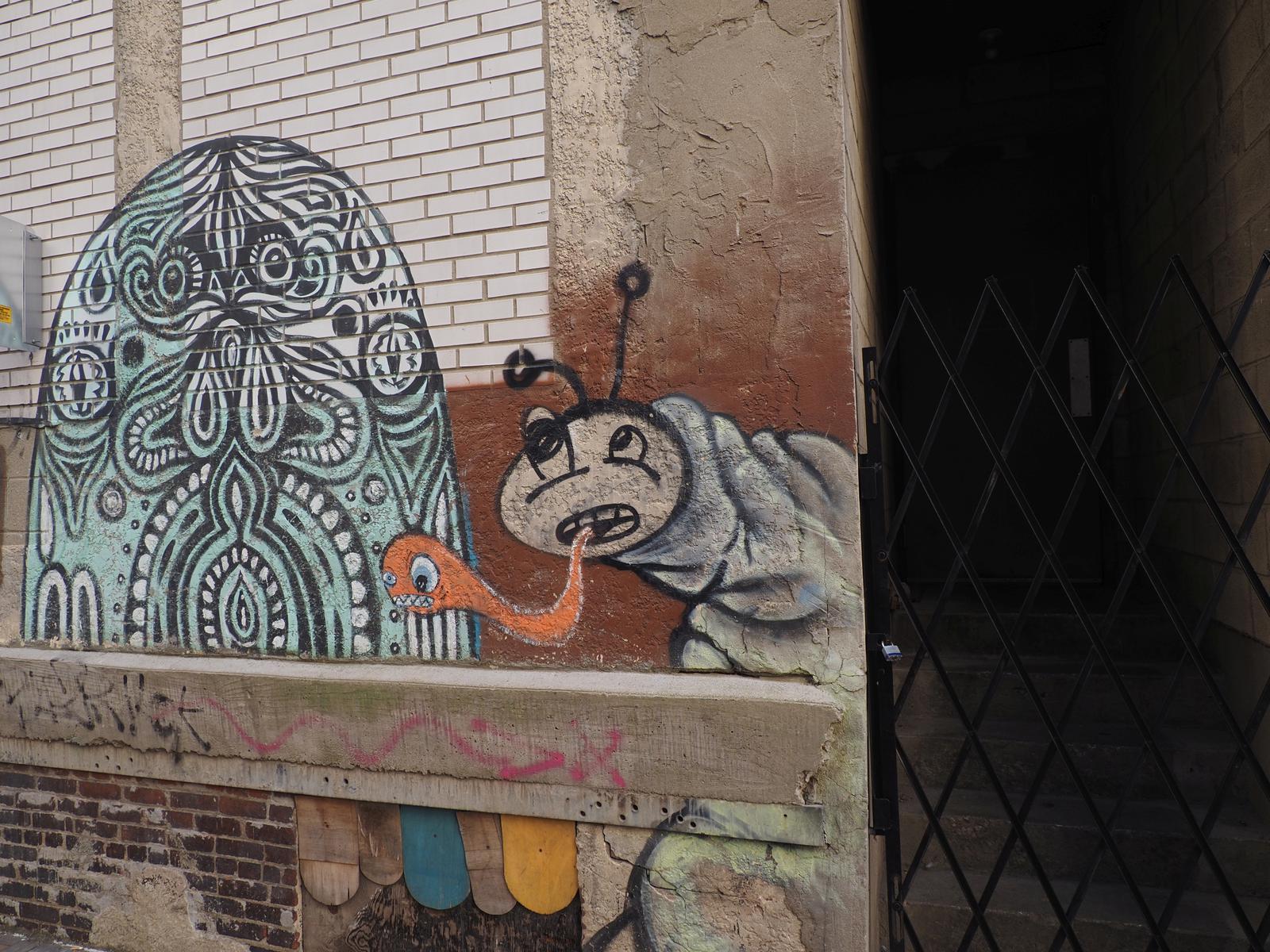 At a local restaurant, I had insisted that X!an and I order some corn fritters. I can't recall having seen them on the menu outside of the buckeye state, so I could only assume that they were an Ohio specialty.

Unfortunately, when the corn fritters came out, our waiter apologized for the fact that there were so few of them, and stated that the folks in the back didn't really know how to make them, and that they probably wouldn't be any good, and also that they were on the house, and that they could maybe try to make them again if we really wanted.

We did not want.

However, Columbus is not bereft of culinary delights. A highlight was our stop at Whit's Frozen Custard, a local chain whose goods were truly good. Flavor? Nailed it. Texture? Nailed it. If I lived in Ohio, I would absolutely be a repeat customer, probably to the bereft of my wallet and waistline.

I would wholeheartedly recommend it to any passers-through.

X!an's apartment is located near a river. His quickest path to class is through a cemetary. The cemetary is also home to squirrels, deer, and twenty-somethings who silently whizz around on electric scooters, clearing you by half an inch.

Poll: Who brings the Funk more? 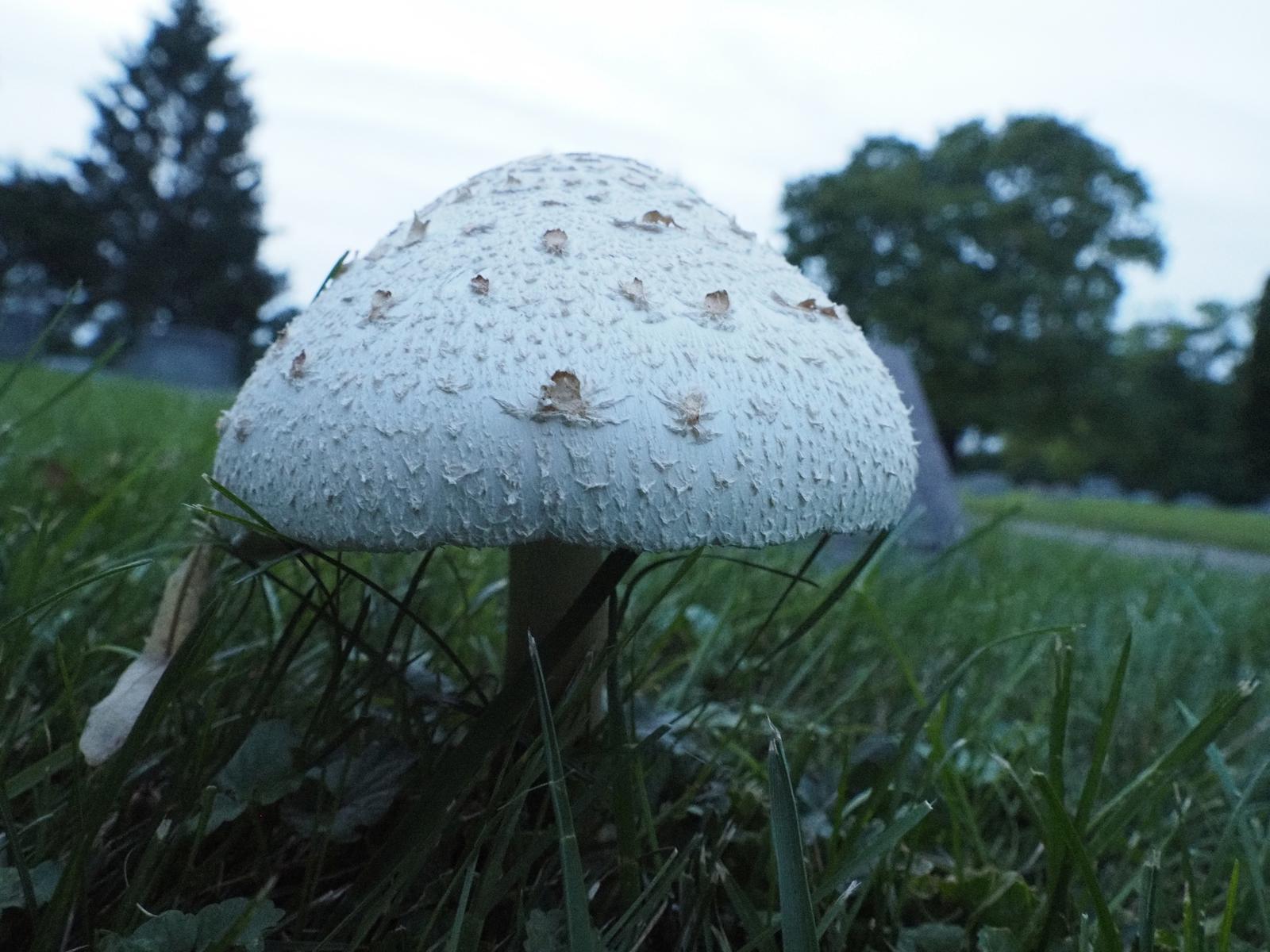 The following morning, I overslept a little bit, and said goodbye to X!an. It was time to skedaddle to some Presidential sites.

Ohio is the home of a number of former U.S. Presidents. One of these is Rutherford B. Hayes, quite possibly the least democratically elected president in American history. (Basically, the Republicans made a deal to have Hayes' be President despite probably losing the vote in return for... ending Reconstruction in the South.) Hayes' birthplace is in the town of Delaware, Ohio.

Let me correct that last paragraph... his birthplace was in Delaware, Ohio. It was torn down and replaced by a gas station. Quoth the historical placard:

At this site on October 4, 1822, Rutherford B. Hayes was born to Sophia Hayes. Hayes' father, Rutherford, had passed away from a fever three months prior to the birth of his son. The Hayes family were renters while their home was being built at the northeast corner of William and Franklin Street. Sophia and her three children moved to their new home in 1823.

The brick home fell into disrepair and was purchased in 1921 by Standard Oil. Learning it was a presidential birthplace, Standard Oil offered to put up the fist $400 and sell the home back to the community for $8,000. Many organizations worked to obtain the funding to purchase the home but were able to raise only $4,760. The home was demolished and a Standard Oil gas station was built on the location. In 1926, a memorial marker was placed in front of the gas station by the Delaware City Chapter of the Daughters of the American Revolution to identify where Hayes' birthplace structure once stood.

I felt a bit bad about reading it only after I filled up my gas tank. But what can I do sometimes? I guess with so many presidential birthplaces in their state, Ohioans were OK enough with forgetting about this one.

After all, this gas station was only a half hour's drive from my next stop, a significantly better maintained Presidential site...