I wrote this post a fair while ago (2020), as part of an elegy to my stint in New York City.
It is part of my answer to the age old question, ‘How could you leave New York?’ (pandemic notwithstanding)

You stop to catch your breath inside the shoebox you call “a New York City apartment,” arriving again at the realization that the city is unspeakably lonely.

You scarf down two pizza slices on paper plates, thinking back to your near run-ins with Empire State Building ticket hawkers and tourists who suddenly stop in the middle of the sidewalk, and you shudder.

Some days it feels like it's only through advance planning and effort that people connect with anyone at all. Your breath is caught, but maybe it wishes to escape again. You think to yourself, “what's it all for?”

At least you have your neighborhood?

You make plans with a friend of yours. (Let's call him “Mick.”)

The subway system is chaos, but your friend makes it to your neighborhood okay... eventually. The B/C through Manhattan is painfully slow on a normal day, let alone on New Year's.

You meet your friend and wander into a nearby neighborhood bar that you decided to visit for the first time (let's call it “Whisper's”), and find that you're the only patrons.

It's a twilight zone world, with tables covered in bits of plastic that look like they could be screwed together into champagne flutes. It takes a while for you to realize that anyone works there at all. The sound system is on, though. Relentlessly pumping decade-old Katy Perry hits.

At first sip, they're pretty good. But then the ice starts to melt. By the time you've half-drained yours, there's more water than anything else in that copper cup. The drink bill will be at least $20. You both want to leave at the first opportunity. 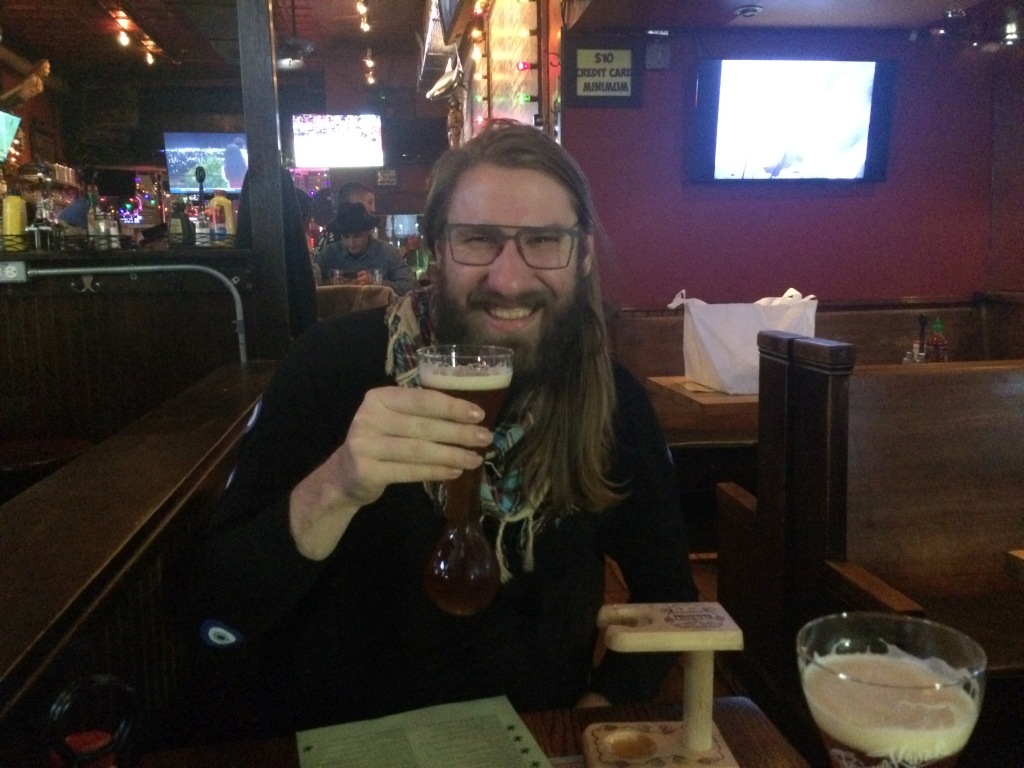 Many New York City neighborhoods feel plastered over and fake. Their sense of place is eroded, shops homogenized.

Each day, when you get home, you emerge from a subway staircase to see the same pharmacies, and the same fast food joints that you see everywhere else in the city. You wonder which agent of big real estate (or satan) Duane Reade sold his soul to in order to have so many stores.

You walk past people sleeping in the streets as you walk a few blocks to your apartment. Most of the time they stick to the shadows, under the scaffolding or on the street corner, and they mostly stay silent as you breeze by. It rankles you, but you keep walking.

Somehow, you've left work late enough today that your only company in the train car is a McDonald's wrapper.
×

Your neighbors make short sight of themselves, disappearing into apartment doors, locked behind them instantly.

All except one, who always greets you. He's an older fellow, who lives on the top floor of this walk up. He breathes heavily on the stairs, especially when he's carrying grocery bags. His short breaths smell of cheap liquor.

You have no sympathy for him, because every now and then he gets in an argument with his wife. You can hear the screaming through the walls.

At their most articulate:

This from the man who was upset when you were assembling on IKEA furniture on a Sunday afternoon.

“I have to assemble this shelf,” you said, “there are hundreds of dowels here.”

“It's disturbing my wife," he said.

“Would you prefer that I work on this later in the evening?” you ask.

But still, you live in fear of his outbursts, audible even over the rattle of the broken bathroom fan.

You like shared Via rides. They're seem more economical and seem less unethical than some of their competition.

One late night, after singing some karaoke in a much cooler neighborhood, you share one with a linguist, turned professional musician, turned stage design artist.

They're older than you, but they feel younger. Like someone with optimism and potential, someone not yet worn down and jaded. Not another someone partaking in midtown $3 devilled egg happy hours.

They live in the Upper West Side too. You're baffled.

You talk life and philosophy, and exchange phone numbers. In the booze-enhanced haze, it is the most marvelous, unexpected, and beautiful conversation you've had in long time.

You will never speak again.

In the midst of all of this, you find some happiness.

Your favorite is the Fountain of Peace, closer to St. John's Cathedral. It's a short walk to some bizarre art, with delicious pastries close-by.

In the summer, Dominican water ice is plentiful on the streets. It's cheap and delicious enough that you try to make sure you keep small bills in your wallet.

Your commute is good. Central Park is close by. 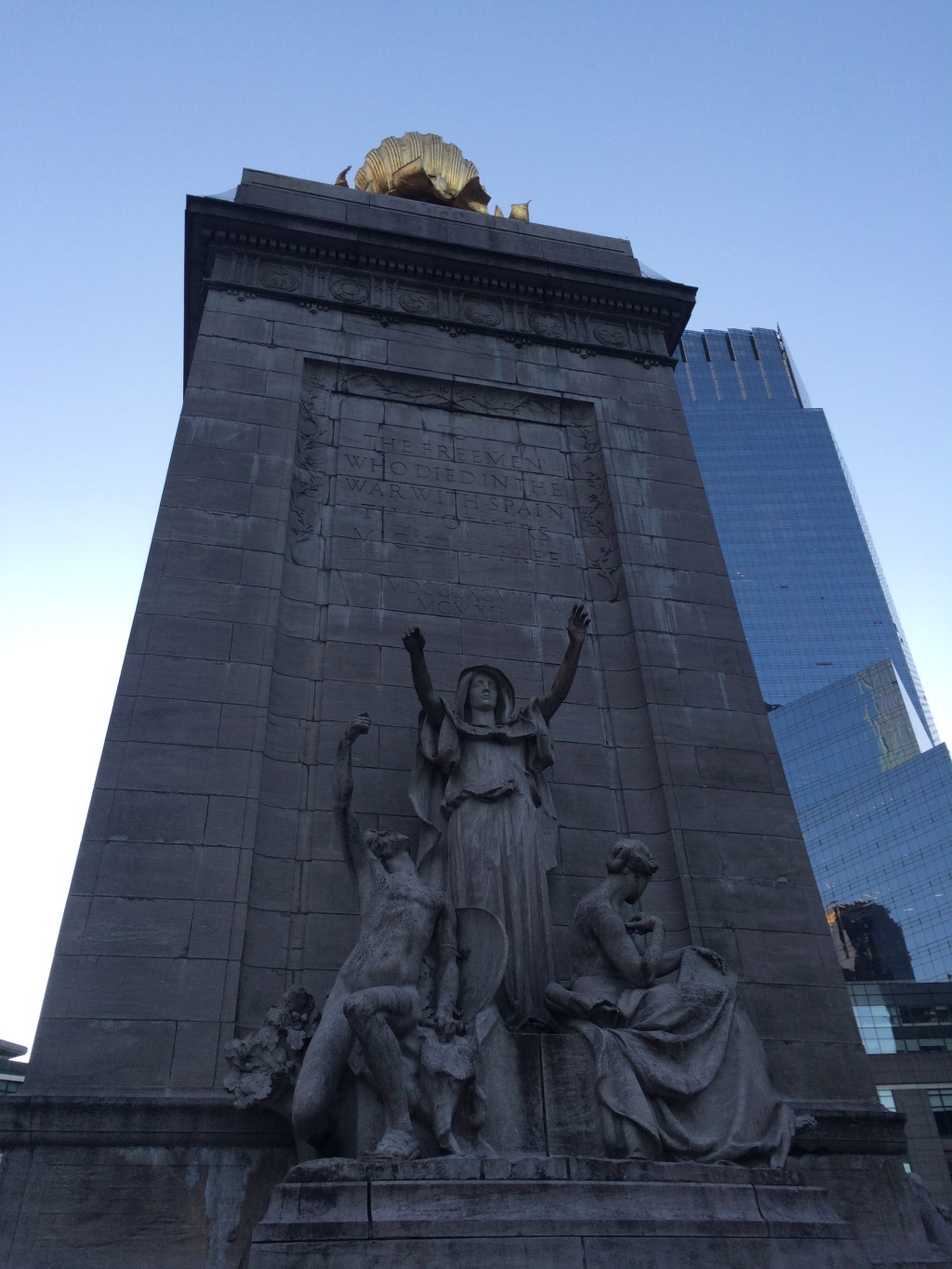 A statue by Columbus Circle, somehow shot when the lighting was really good.
×

You live near some of the finest in chain grocery stores, though you do your best to avoid visiting them as much as possible. The lines move pretty rapidly, but they get to be so long and unwieldy that they snake around, blocking aisle after aisle of product.

A friend visits from out of the country, and seems to think that your apartment is in a really stellar spot.

Another friend visits, and you get to see half of Pink Floyd together on stage... in your neighborhood.

But on all your best days, you take the subway.